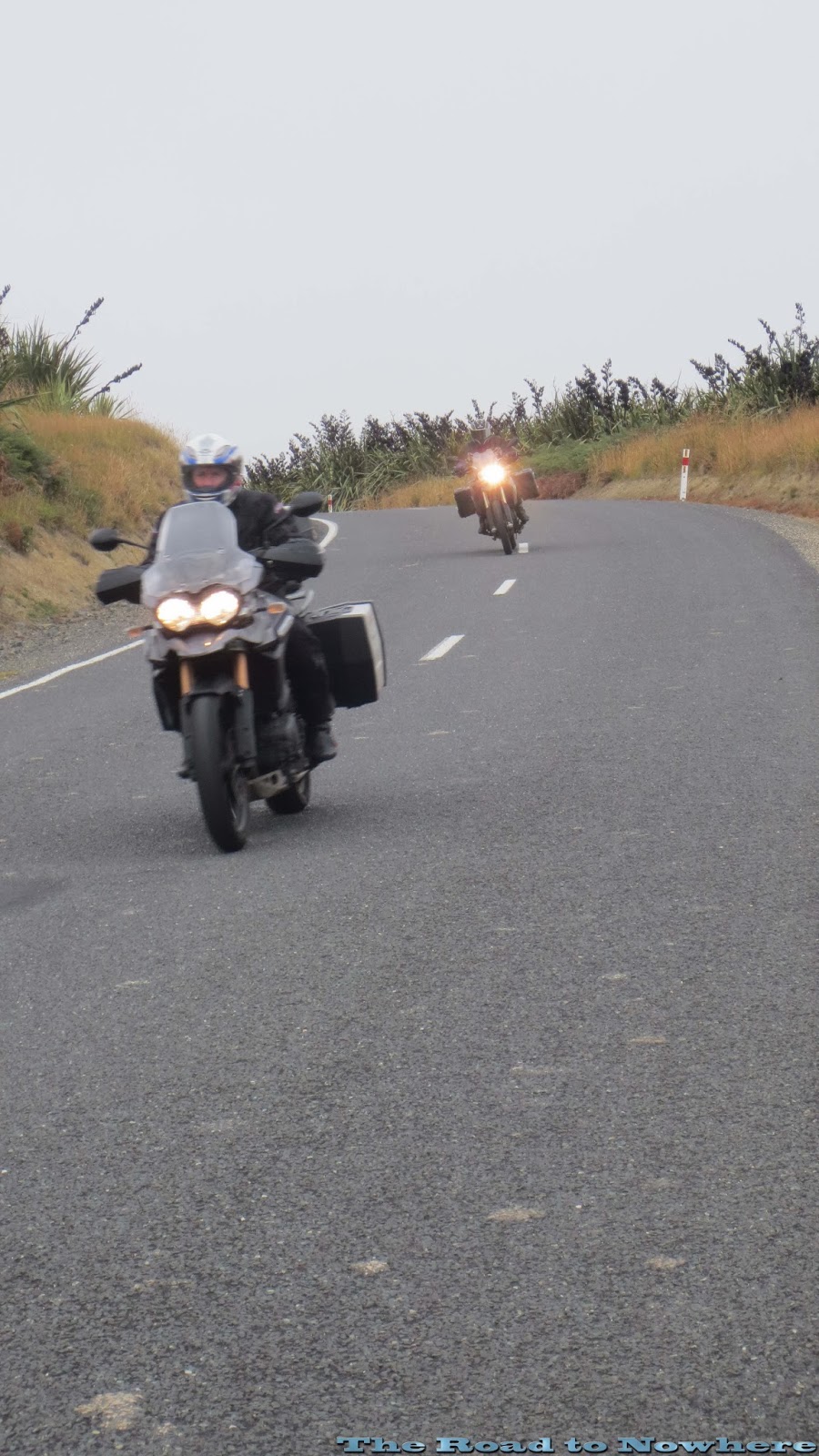 This morning when we left Balclutha I was undecided whether or not we would cross the river and ride on the west side of the clutha river or as originally planned the eastern side and ride up to Lawrence. I went past the turn off to the western side unbeknownst to me so the decision was made for us. I am glad that we ended up riding the road on the east side up to Lawrence as this was a fantastic set of sweepers and twisties over the hills. This was very hilly with sometimes spectacular views of lush green farming land.

It was also along this section that just after one of the photo stops we came across some unsign posted gravel for 8-10 bends. If we had of been going full till we could have been in real trouble. Everyone loved this section of road it's one of those great little back roads with no traffic you can just get into the zone on. And we were all in the zone.


Left and Below: Boys having fun in the hills. 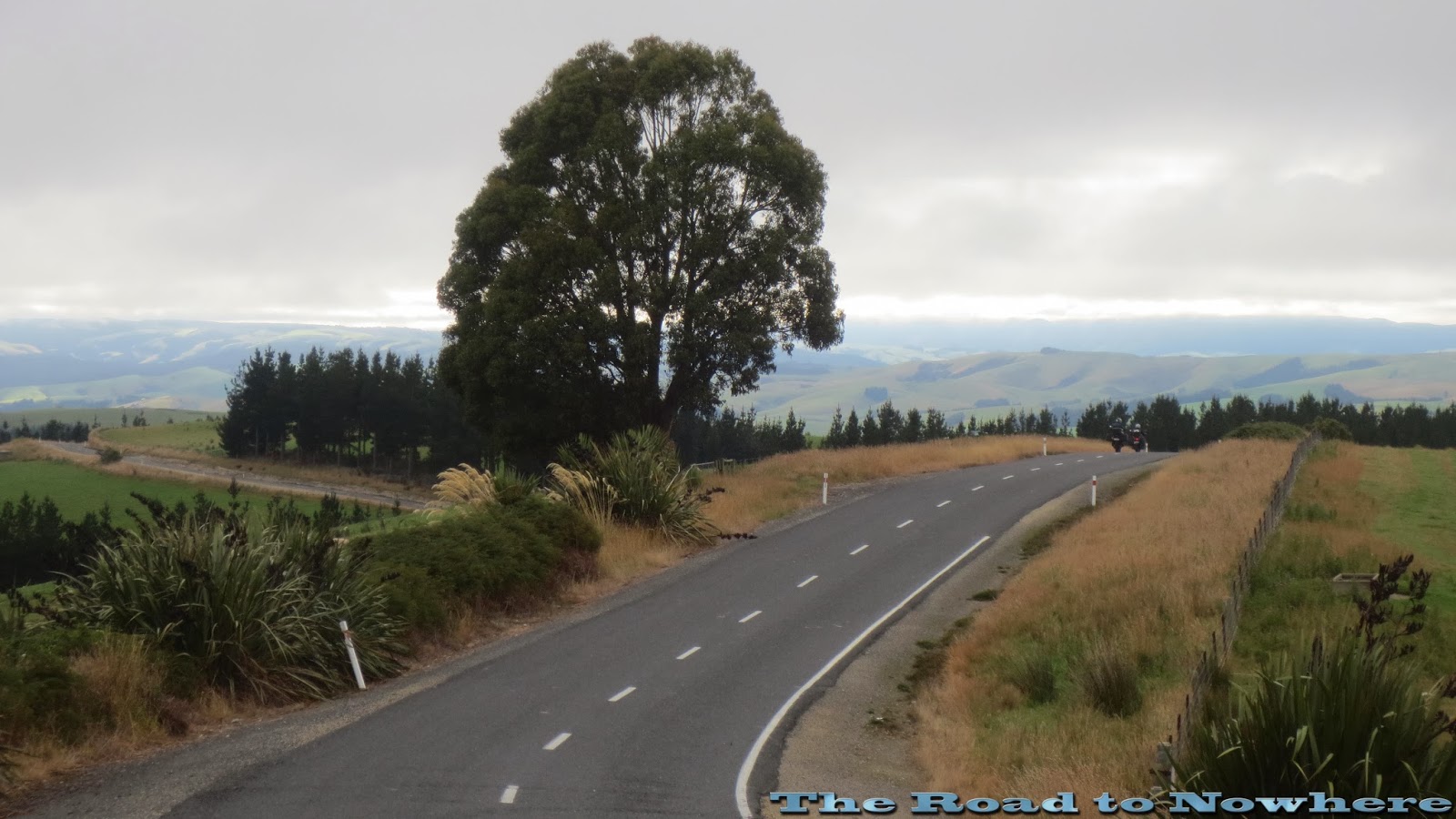 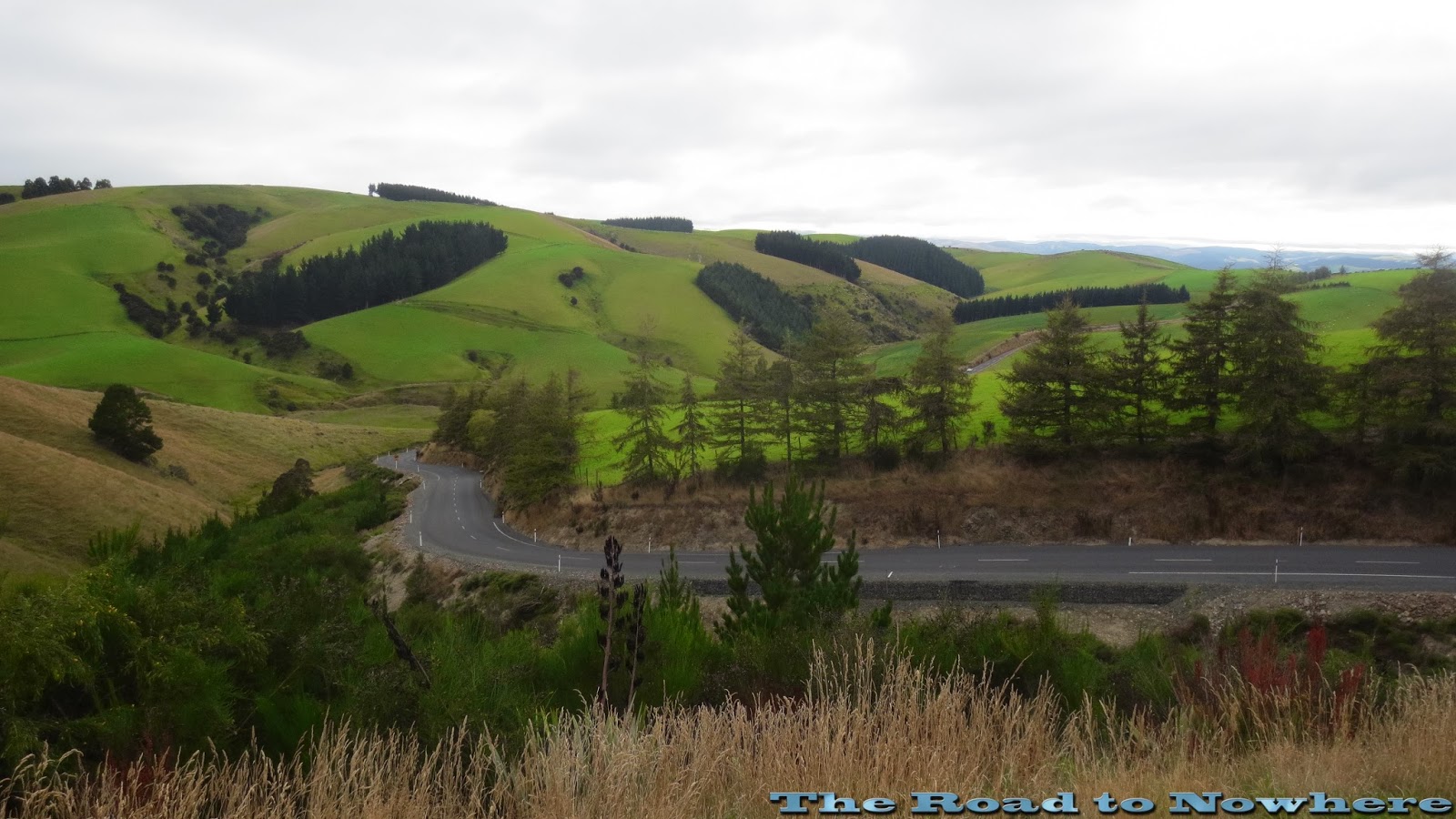 After we turned off from the Teupeka West Road we followed the main highway towards Alexandra. This road felt like it was constantly climbing up and up into the highlands again. I noticed that there were lots of orchards everywhere along this section of road. Funny that, when I looked up the name of the road on google maps it was called Fruitlands-Roxburgh Rd. Clever kiwi's to think up something original like that.

The road also followed along the clutha river, which there were some great views of the river from along the road. The river was really big due to the fact that there were several dams along the way.

As we approached Alexandra the landscape began to change drastically from lush green farming land to barren rocky terrain. The town itself is overshadowed by these huge rugged rocky hillsides which remind me a little of Queenstown in Tasmania with its barren hills and the scenes of Rohan in the Lord of the Rings. It's a bit eerie and unlike anything I've seen thus far in NZ. Just when you thought you've seen everything, you see something new and completely different. We stopped here to refuel ourselves with coffee's and a bite to eat. 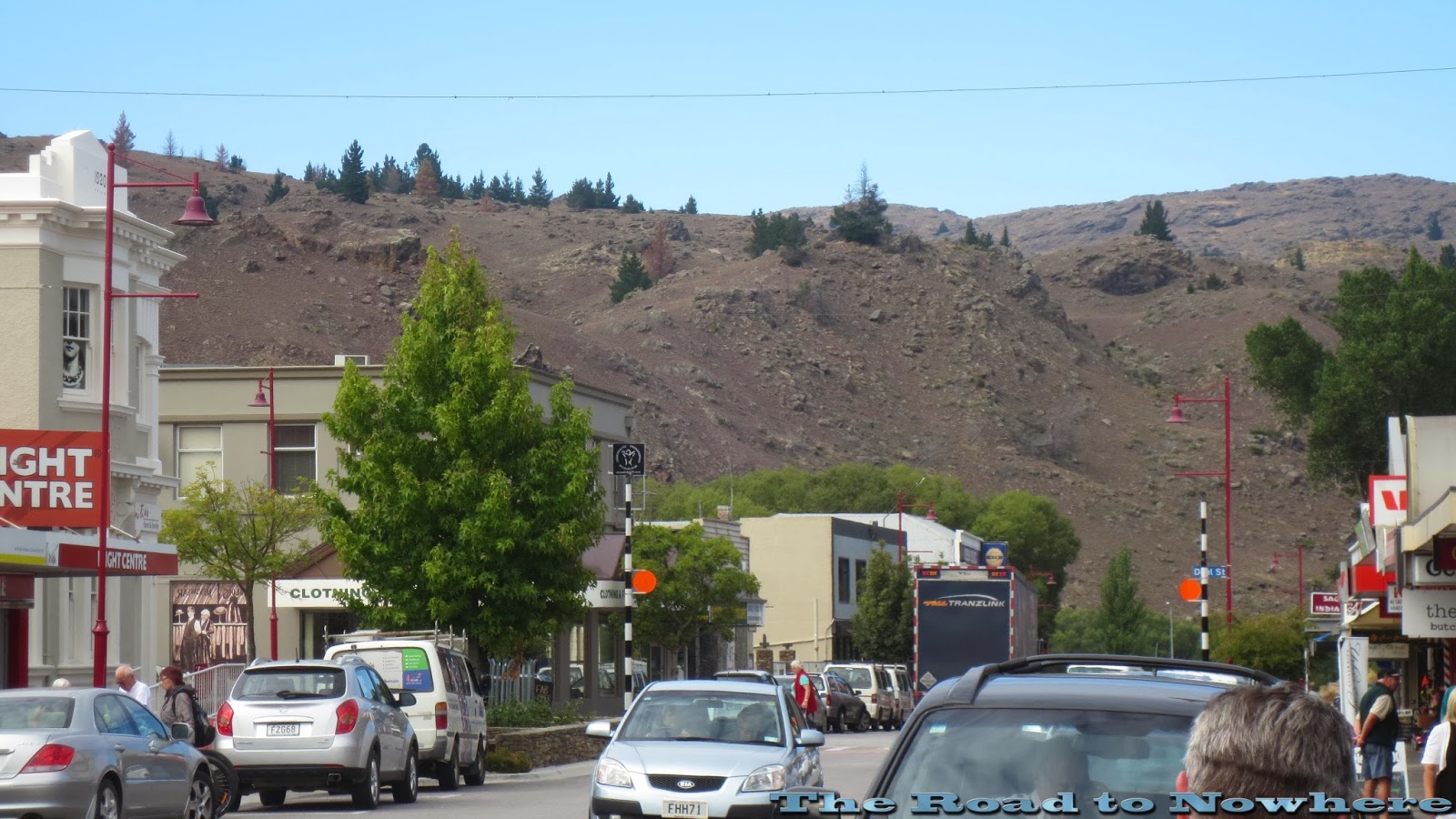 Looking at the map we saw that there was a lookout over town which I wanted to go have a look at and it was right near some pushbike track Dave wanted to look at, I think it was the central Otago rail trail. Looks like it would be fun. Below is the views we saw from the look out, stunning scenery of Alexandra, and you could just see the top of the peaks of the remarkables mountain range from here.

The lookout was 276m(905ft) high and in the picture above we were standing on the edge of a drop of about 400ft. The picture below shows a bit of perspective on how big we are in the grand scheme of things. The hills here are big that's for sure and makes us and the bikes look so small and insignificant. 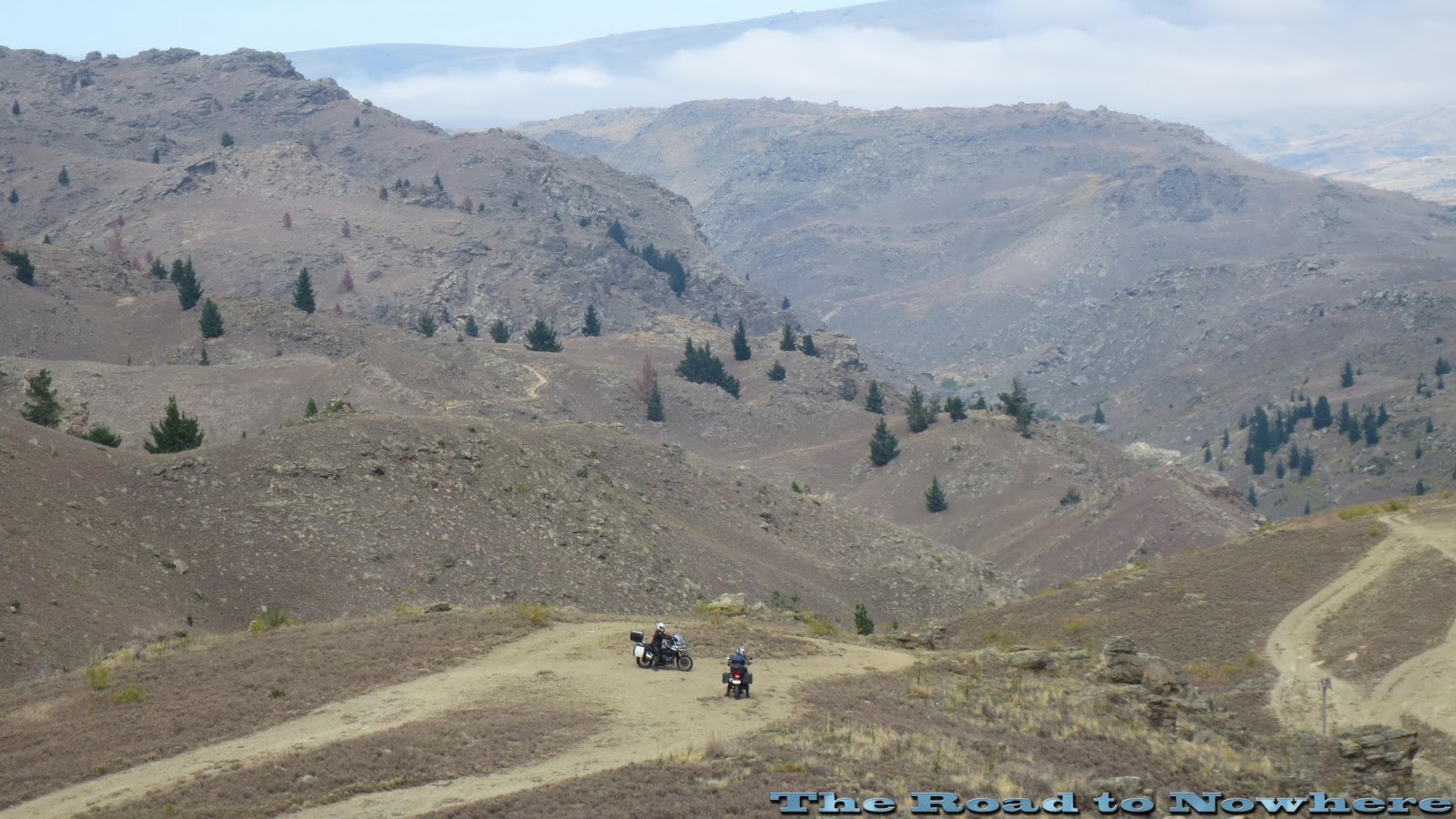 We then continued on through Clyde out towards Cromwell on main highway 8. We briefly stopped in at Clyde dam for a look and continued on. The road here continued to follow the Clutha river. Boy this is a long river as we'd been following it since we left Balclutha this morning about 190kms ago. 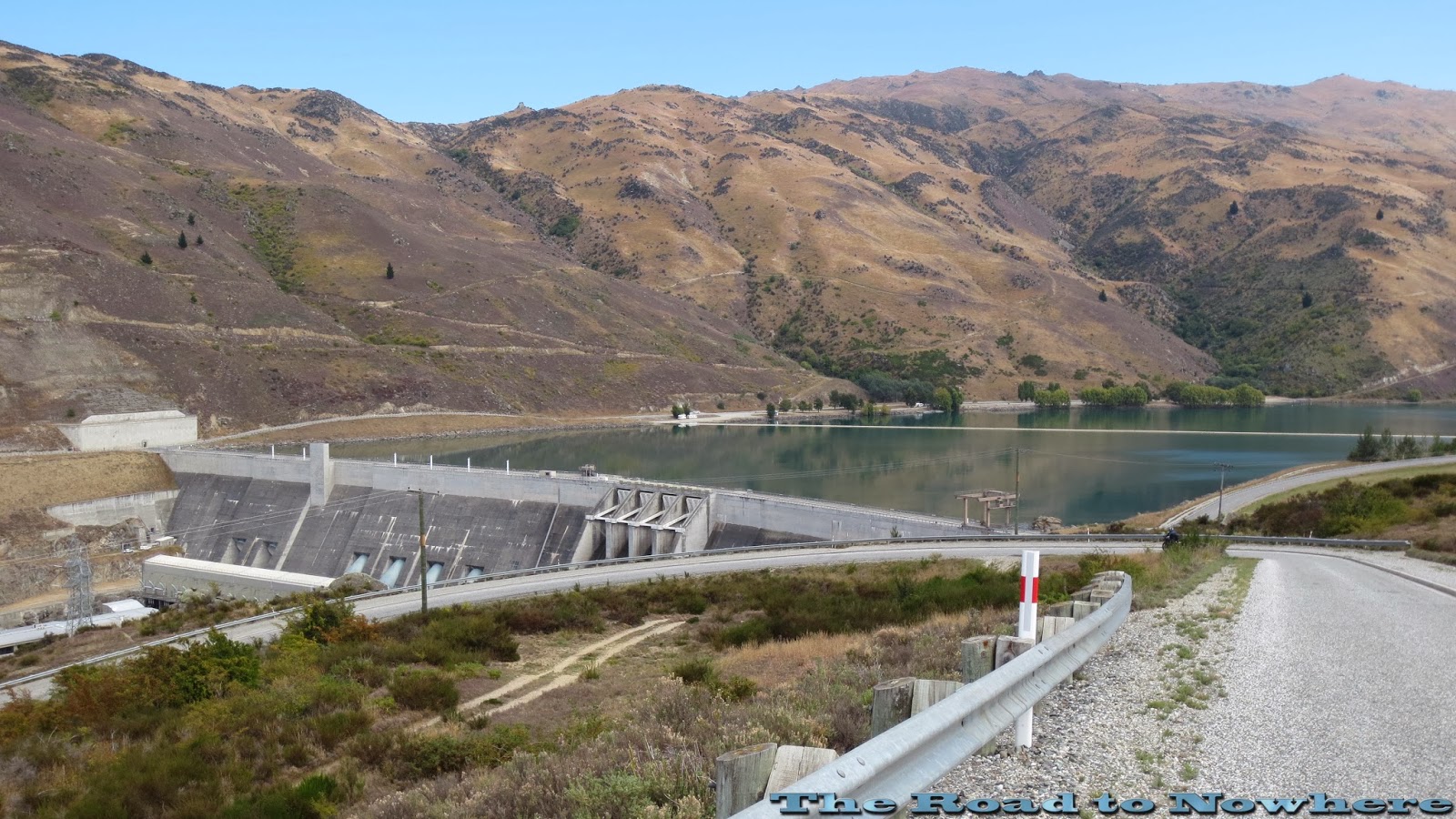 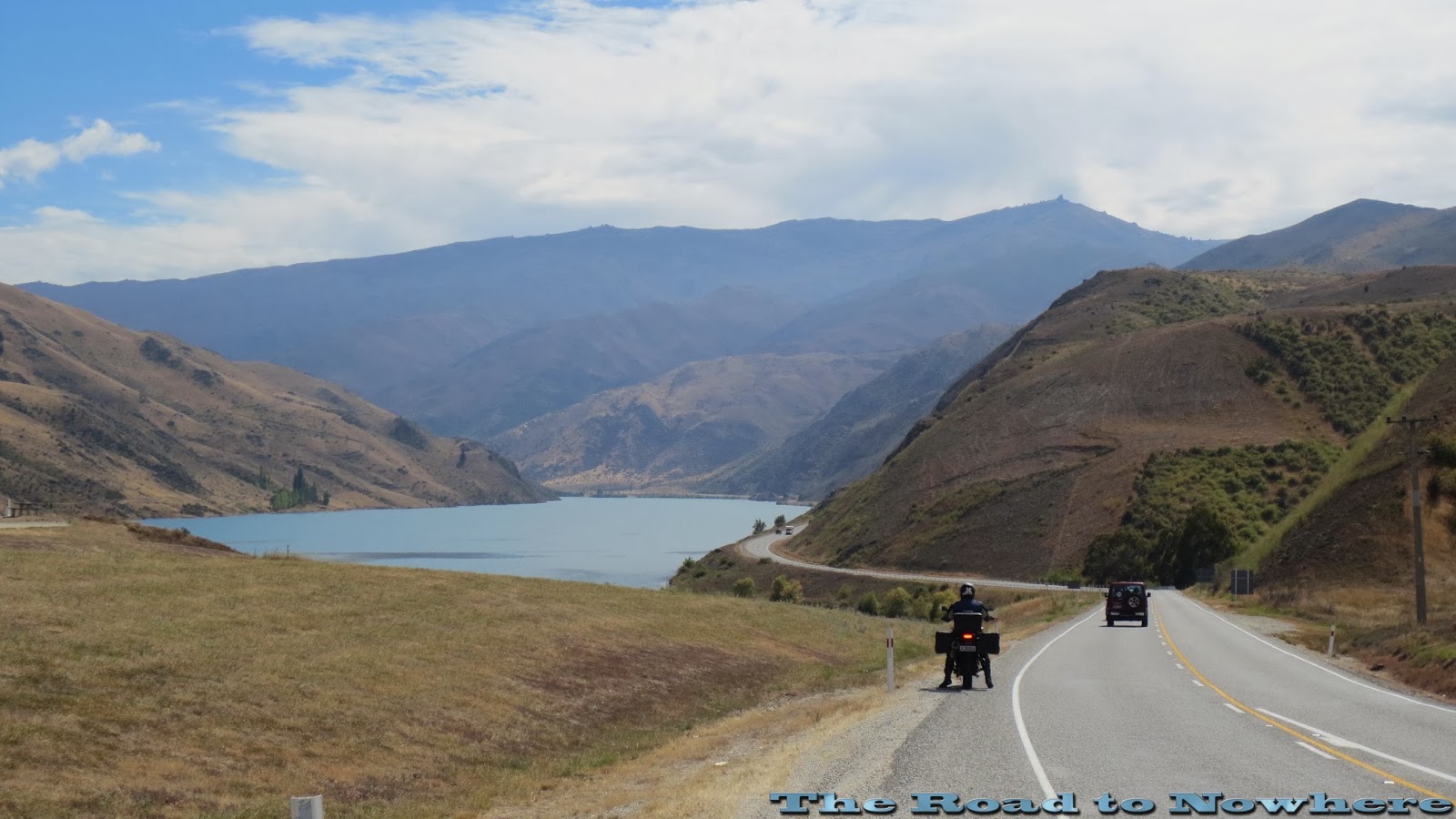 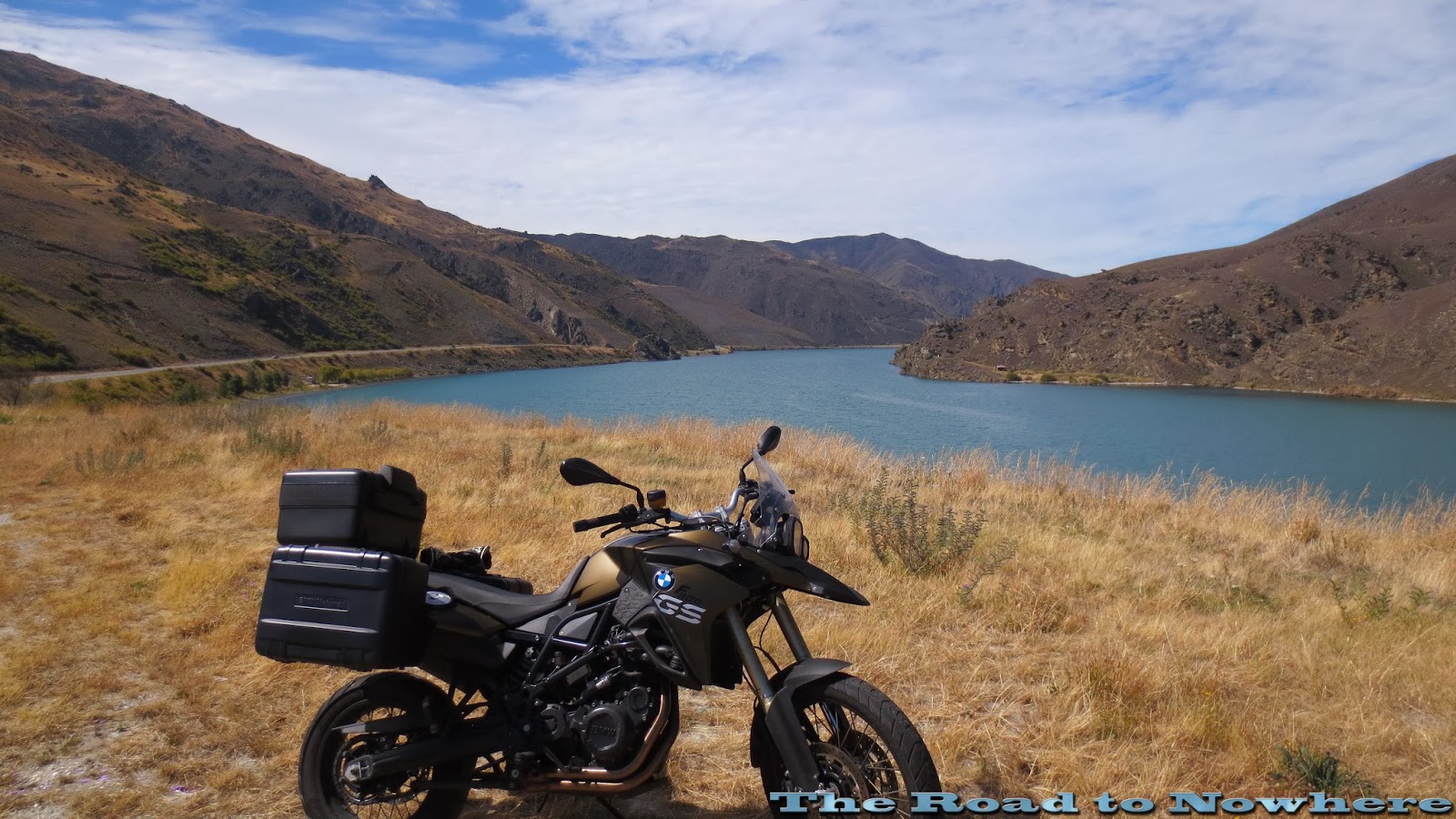 We stopped briefly in Cromwell to fuel up and then kept going on towards Omarama. This road was to be the last of the 4 iconic passes that we would ride namely the Lindis Pass. Lindis seemed to be the lowest pass and least winding of the 4 passes. It reminded me of riding in the Australian alps as the mountains here were not as steep as any of the other passes, more hilly like than mountainous and it was covered with grass land and shrubbery, very Australian like it made me feel like I was at home again. 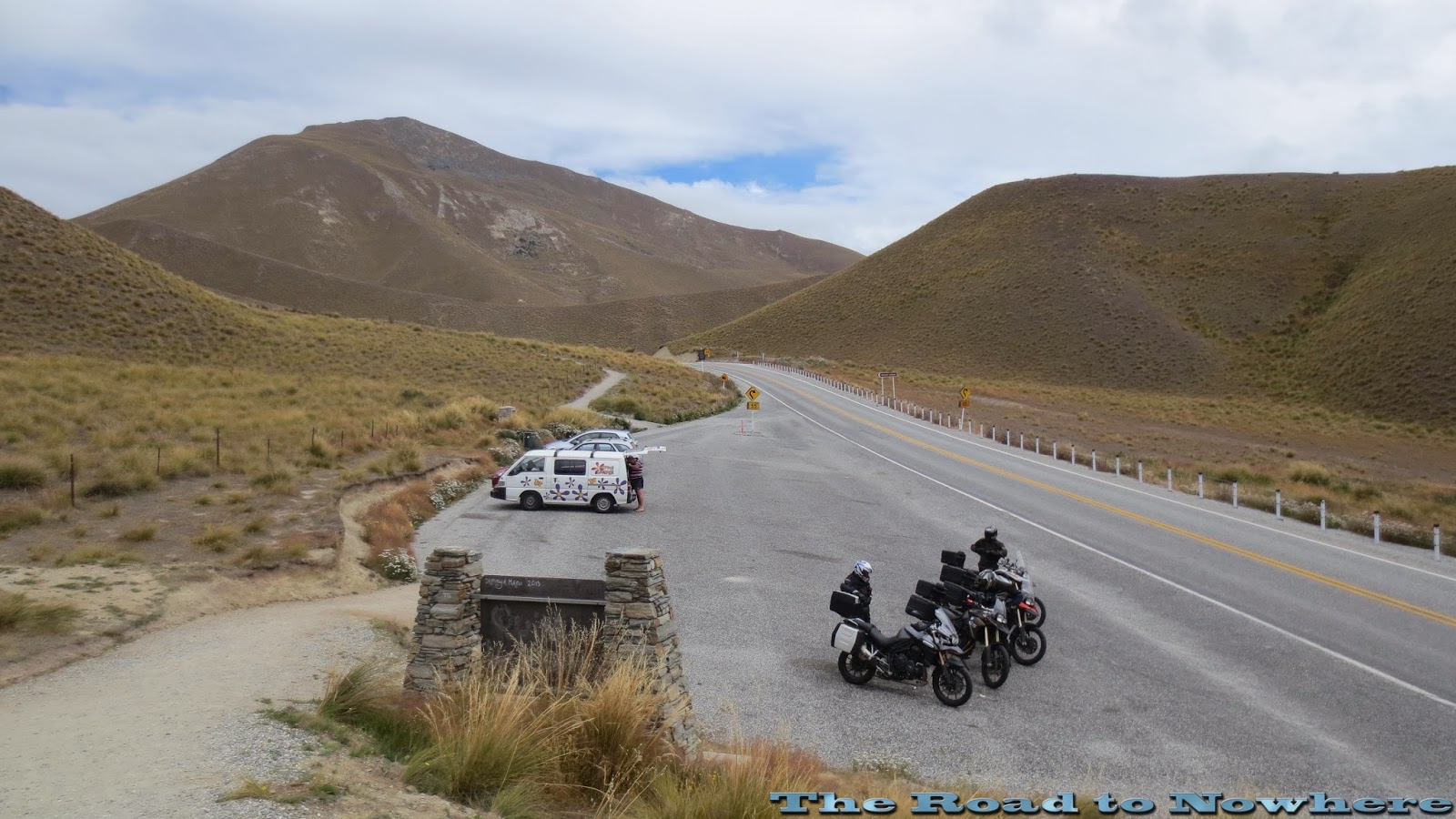 We'd reached Omarama and it was still early afternoon and it was only about another 30kms to Twizel. The weather had started to cloud over the further north we rode and we were unsure if we would ride up to Mt Cook today or in the morning. A bus driver that we spoke to that had just driven down from Mt Cook had said it was raining with low visibility up there so that helped us make up our minds that we would ride out to Benmore Dam and look at that instead then come back to Twizel for the night. Hopefully we might have better weather for Mt Cook tomorrow. Dave decided that he would ride into Twizel as the ride to the dam wasn't his cup of tea. I think he was becoming the equivalent of jet lagged but on the motorcycle, maybe motolagged.

It was only a short 30km ride out to Benmore dam which is supposed to be the biggest earth wall dam in the southern hemisphere. I wasn't overly impressed as most of the lake was behind the hills and the dam wasn't really that big. It still had nice views and it was a great ride around the lake but you would expect that riding around a dam. 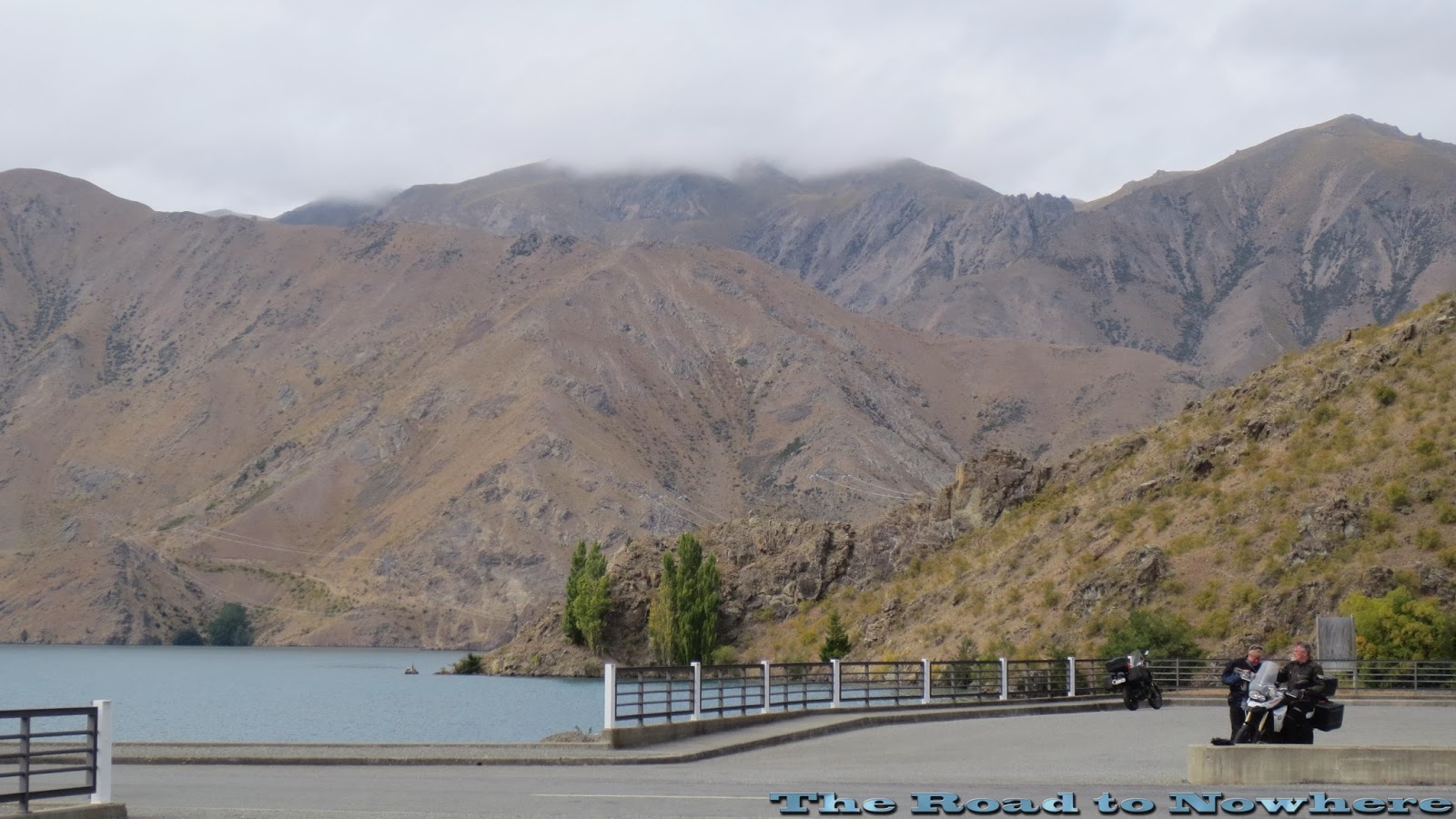 The ride around from Lake Benmore to Lake Aviemore was a narrow but a fun little ride that was about 25kms long. There was another dam at the end of lake Aviemore with more power generators. This area is part of the major power generation in NZ

It wasn't long before we had arrived in Twizel and we easily found our motel for the night. It was time for a quick shower and down to the Twizo (pub) for more beers. It was pretty busy little pub mostly full of tradies by the look of it. Another great day of riding done and dusted with only one day to go, it seems like the trip has been a whirlwind tour, where did all that time go.

We were awaken in the middle of the night by this very loud what sounded like an air raid siren, Everyone was standing out the front of the motel looking dumbfounded as to what it meant. We didn't know if it was something for an earthquake warning or what so we went back to bed.