Unfortunately we only had the two nights in Queenstown, as you could really spend weeks here and thousands of dollars doing fun things. It really is the adventure central on the south island. As a matter of fact just about any road around here is also a motorcycling mecha. But we had to keep rolling forward and I was excited to be riding down the Queenstown-Kingston road and eventually the Milford sound road. I had been looking forward to Milford sound the whole trip with eager anticapation. Would it be fine and sunny(fat chance) or would it bucket down cats and dogs(more than likely).

After riding the Glenorchy road in perfect conditions the day before the Kingston road didn't quite seem as good in overcast conditions today, but still the ride and views were spectacular and the road was lots of fun. It is a crackingly good ride.


The guys were obviously having lots of fun along this section as they didn't stop to take any photos at all, it was hard not to get a blurry photo as they blasted past. 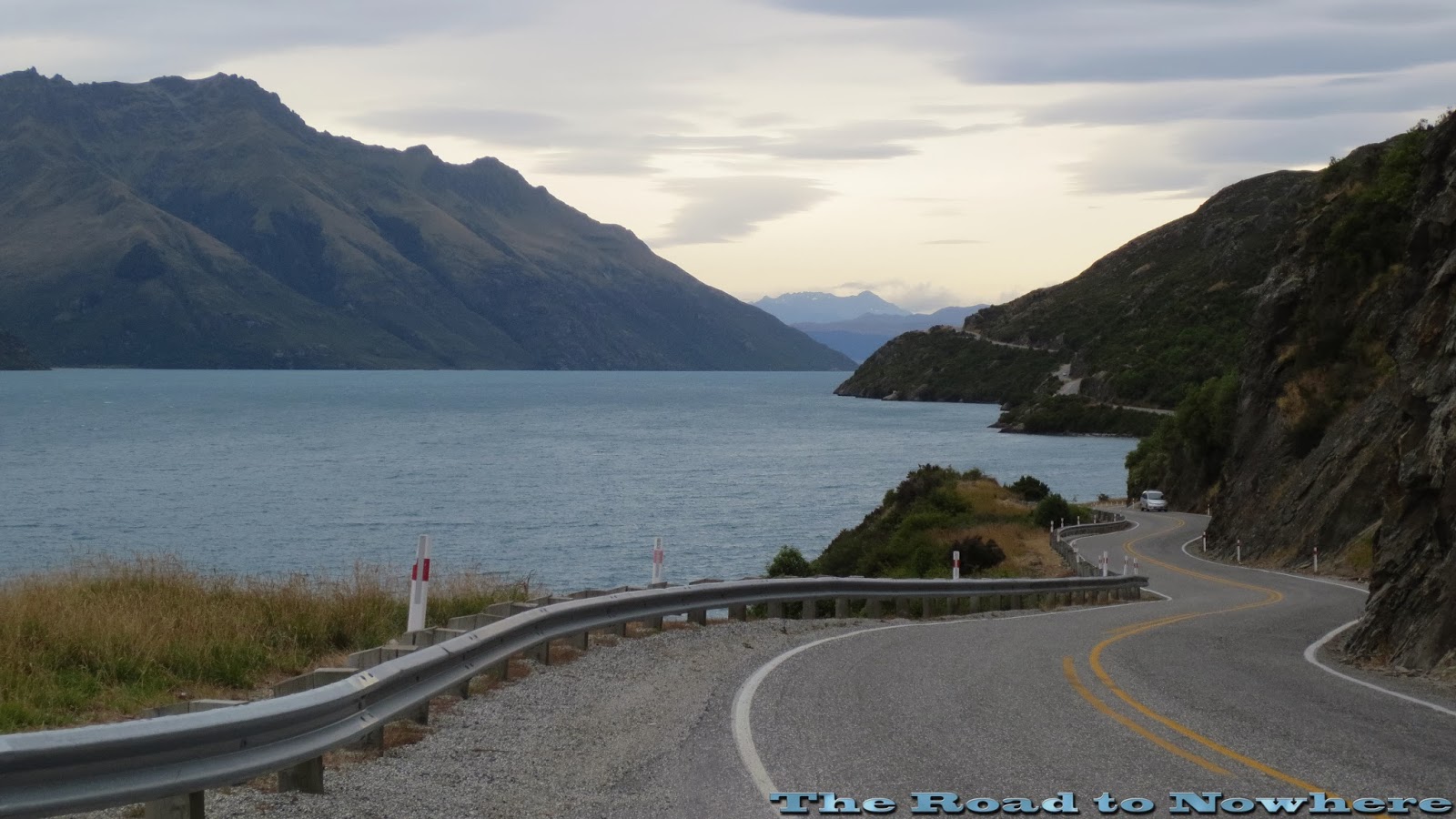 It wasn't long before we got into Kingston and had a coffee at what looked like the only place in town. There didn't seem to be anything much in Kingston. So we kept on riding down to Te Anau which would be where our accommodation was for the night. When we got into Te Anau we fueled up and the weather looked like it was going to get worse as it was really starting to cloud over now.

Wayne wanted to keep going but we had decided to get some subway that was quite handily next to the petrol station. The idea was we could have a picnic lunch in Milford. We would eventually catch up to Wayne as there was only one way in and out.

The ride into Milford sound is one of those great motorcycle rides, you don't want to miss it. It has a bit of everything. The mountains along this section are especially tall and steep and there are big long forest sections of road where the tree canopy's come across the road, there were quite a few places along here that I looked into the forest and thought wow, this looks just like I am in the forests straight out of middle earth in the Lord of the Rings, half expecting to see orcs or elves running through the forest.

After riding through what seemed like endless forested hills we came out into a flat plain with mountains to either side. We could see up the valley towards Milford that rain would be coming soon, but I didn't put my wets on for another 15 minutes or so up the road, when it was just starting to lightly sprinkle. 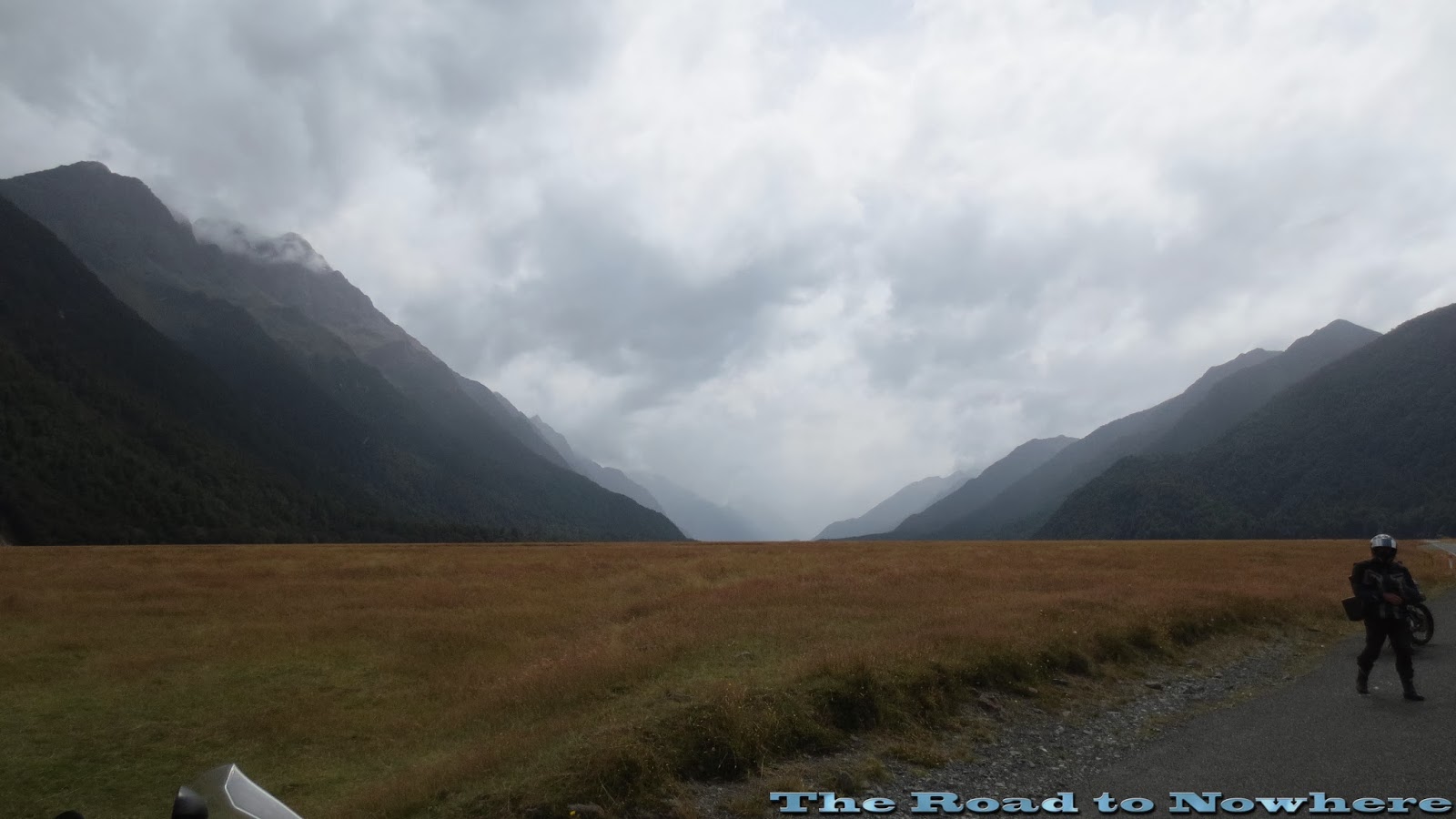 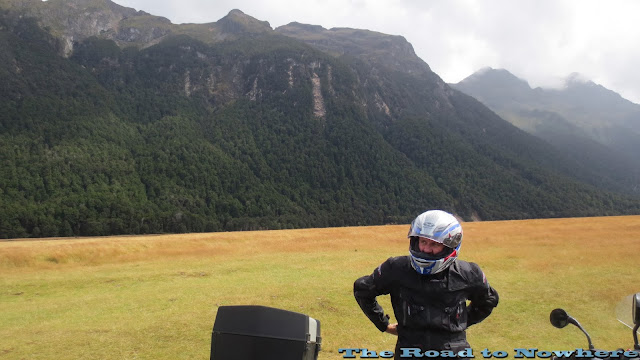 It's lucky we did pull over in a sheltered side road underneath some trees near cascade creek as it started to rain not long after and it didn't let up again until we got back to Te Anau. There was some quite heavy rain too. If it rains 465 days a year here with 8 metres of rain then we must have hit about a metre of rain today. The funny part about it though was that everyone was loving riding in the rain on this road, nobody was complaining. Its hard to explain that but hopefully you will see from the video I shot from my gopro. The road changed between forest and then lake and back again. It was unfortunate that it was raining so much because we then didn't stop to take many photo's from here on in, and the scenery here was beautiful. 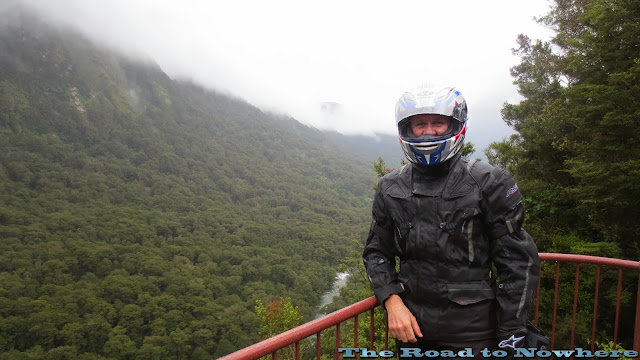 We stopped briefly at Bobs lookout and the mountains here had pierced the clouds. Mt Christina was 2,502m(8,209). You had to turn your head up to try to see the tops of them that's how steep they are and how close to the base you actually are. It's unreal to think that most of these peaks are taller than Australia's tallest mountain Mt Kosciuszko which is only 2,228m(7,310 ft) and that looks mostly flat compared to these monsters. 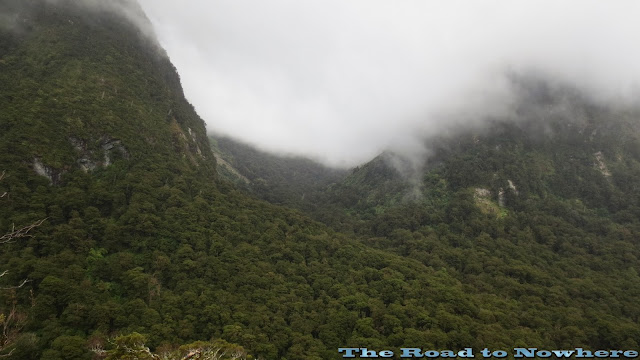 I put the gopro on just before we got to the Homer Tunnel heading up to the top of the pass. The Homer tunnel is an incredible engineering feat, it is bored straight under the mountain and runs for about 1.2kms and when you pop out the other side there are stunning views of mountain vistas and water falls. I love Geoff's comment in the video below when I pulled up next to him. "This is Fucking Awesome" and that's riding in the pissing rain. Normally sane riders don't say such things when riding in the rain. And you know what? It was fucking awesome, I'd do it again with no hesitation.

We rode down from Homer Tunnel down into Milford sound. It was bucketing down cats and dogs so it looked like our picnic was not going to happen. We ended up standing on the front porch of the cafe eating our subway under shelter. It's funny some guy came up to us and asked where he could buy subway cause there was nothing good here. We said "yeah you can get some about 120kms down the road". We should of said you can have this 6 inch bmt for $25. He walked off disappointed.

You couldn't see much in Milford so as soon as we'd finished lunch and a coffee we pretty much headed straight back out of there. By now my boots were soaked, my gloves and I could feel some water inside my leathers. Maybe I should have worn 2 dririder outfits. Water had seeped in onto my chest and my crotch. Ahh cold wet undies, that's a lot of fun for the man bits. The photo below is from my gopro as we were leaving, you couldn't see much at all as you can see.


I'd turned my gopro back onto video as we were climbing back up towards the homer tunnel. The water falls had more than doubled in numbers and size since we came through about an hour ago. This was one of the most amazing sites I've ever seen riding anywhere. Who said riding in the rain was bad, this was the best days riding in the rain I've ever experienced. Last time I was here these hills and roads were covered in snow and we had to drive out in snow chains, see photo below. Looks like the weather really likes me in Milford!

Here's the amazing footage I got as we climbed back up towards homer tunnel which by now there was much more rain making bigger and better waterfalls. This has to be one of the most amazing things i've ever seen whilst riding a bike anywhere.

We didn't stop on the way back out as everyone was soaked, even Geoff who had water proof boots on had water inside them. We couldn't wait to get back to our motel and have a nice hot shower and some nice dry clothes. Then of course it was into town for beers and diner. The room we were staying in was fantastic after the drenching we just received, thank god I chose a good one here. Thanks for the recommendation Jules.

We had diner in town in Te Anau at this fantastic little pizza shop in the main street, my pizza was delicious. When we left there to head down to the pub there was a dazzling array of colours in the sky which kept changing over the space of about 10 minutes. I've never seen such a beautiful and dramatic storm filled sunset. The pictures do not do justice the colours in the sky that night. 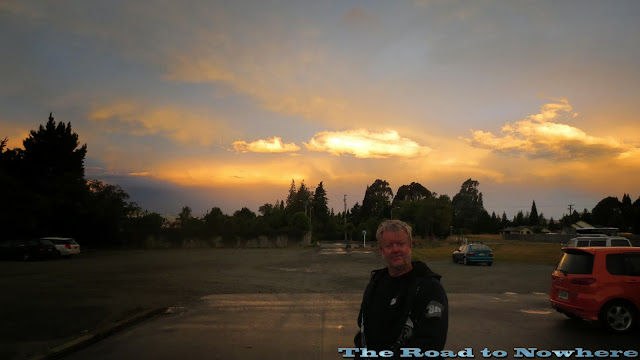 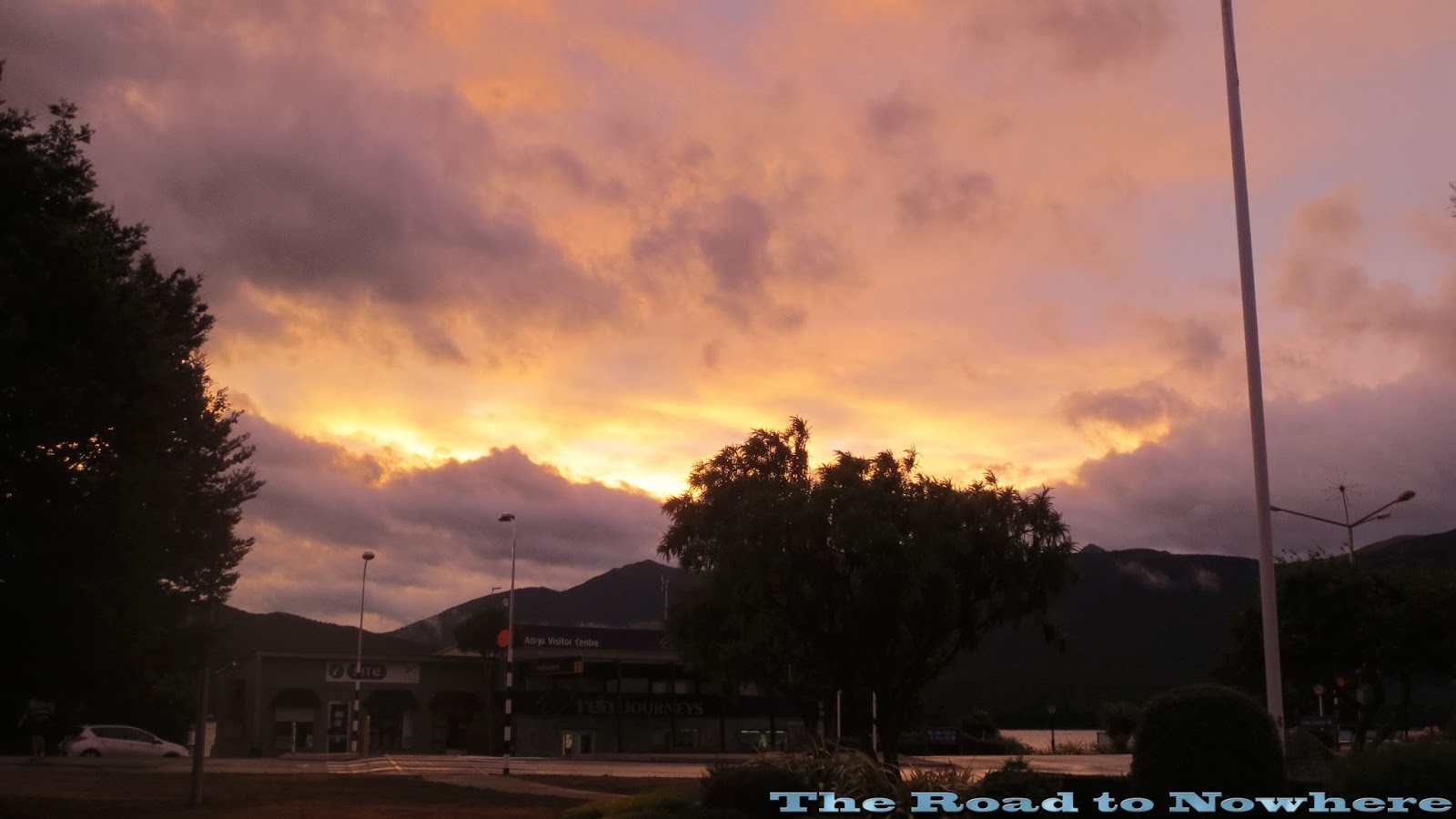 We had a few more beers in the pub before returning to our room for the night. We stayed at the Arran Motel which was fantastic and the best place we stayed at on the whole trip. The rooms were spacious, clean and the beds were fantastic. I slept well tonight.

The owners were motorcyclists themselves having a nice ducati cafe racer and a harley in the garage. I would highly recommend this place to anyone. Give them a go if your in the area. It was the wettest day we had and my boots, gloves and jacket got wet going to Milford so it was fantastic that we had such a good place to stay on this night in particular. The floor of the lounge area was covered in boots, gloves, jacket and pants all in front of the heater which ran pretty much all night. It was nice to put on dry gear in the morning.

One thing I noticed about the bikes even in the pouring rain was that the tyres on these bikes were great, I didn't have a single slip or slide and they felt almost as good as they do in the dry. Yet another magic day riding in this amazing country. Surely the best is now behind us and it can't be any better? Can it?????