The morning started out sunny and fine even though some of us were a little on the dusty side after last night, luckily I was ok, Dave didn't look to good. A quick breaky in Nelson at the Lambretta cafe and we headed on out towards Takaka Hill. I wasn't sure what to expect along here and if I thought yesterdays riding was a real treat then we hadn't seen anything yet.

Takaka Hill was some of the most fantastic blacktop twisties you could find anywhere which wound its way from near sea level up to the peak of 791 metres(2595 Ft) and back down to the township of Takaka. I think Wayne put it best when at the lookout he said New Zealand must be the love child of Australia and Austria. The views along this road were magnificent.


From the lookout you could see the road winding its way down through the lush forested hillside and down onto the valley floor and then out of sight. Beautiful.

We made our way down into Takaka township which is just a small tourist village but very pretty. After a quick drink it was back on the bikes and it was so unfortunate that we had to ride back over the hill again to get back to Murchison. We put the cameras on the bikes halfway back up the hill and it was here that I captured the first camera of the trip biting the dust err tarmac.

The centre stands came in for another hammering up and down Takaka Hill, ground clearance on these BMW's is a bit on the low side so I have to take it a bit easy. From here we fueled up again and headed out towards Murchison. The valley road along here until we got to Kohatu was a fantastic run of sweepers through the pine forested hills, pure riding delight. It was early afternoon and we stopped at this little cafe on the corner at Kohatu. Excellent coffee and caramel slice for a late lunch/early afternoon tea, it was to early for beers. It was along this section Geoff and Dave had swapped bikes. When Geoff pulled up he had a gopro in one hand with a mount missing some bits. He'd managed to catch Dave's gopro as it was falling off the handle bars. Nice one Roosty.

There was rain coming over the tops of the mountains through here and I was certain we would need to stop and put on our rain gear but every time it looked like we were about to get wet the road suddenly turned away from the rain clouds and wound its way into the next valley over. The ride over Hope saddle was some excellent bit of road, with awesome views. Continuing on we made our way through Murchison and on into Upper Buller Gorge. I had driven Buller before but not ridden it, and was much more fun on the bike. The sections along the forest and river is fantastic riding and very scenic, it's more or less high speed sweepers all the way. We passed by the Swing bridge and jet boating, no time for that though.


We then turned into Lower Buller Gorge which heads to Westport. There was a bit less traffic through here and the road was even better than Upper Buller. The sections along the river were magic. There was even the road going through this huge cutting out of the hillside with the road being single lane through. Lots of high speed sweepers with some slower corners thrown in with fantastic river views. 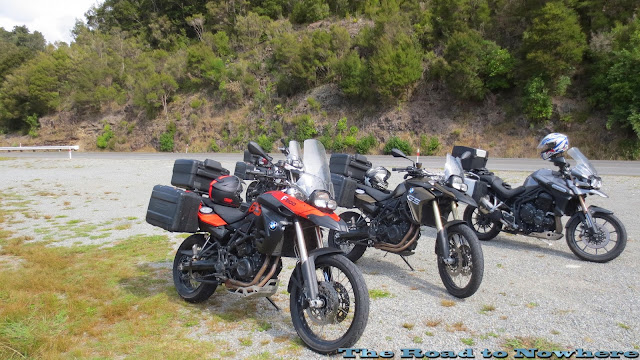 It was spitting with rain in the last photo, so it was time to put the camera's away and enjoy the remainder of the road into Westport. We stayed at the Buller Bridge Motel here and the room was fantastic with comfy beds and no traffic noise outside with very friendly hosts. Another fantastic days riding even better than the day before, surely it can't get any better than this can it?

Here's the best bits of lower Buller Gorge from the rock cutting.


Day 2's thoughts on the bike. I've now mastered mounting the bloody thing. It's so tall I had difficulty getting on and off but now I just mount it like a horse by putting one foot on the left peg and step up and over onto the right peg. Sorted. Parking on angled surfaces is a bad thing as it's so top heavy and makes remounting near impossible and if the angle is too big the bike wants to topple over. I've started to have a hate/hate relationship with the massive screen on this bike. It's far to tall and if I ride along with the visor cracked the wind blast makes the visor vibrate and become noisy. It also makes lots of wind noise, if I move my head out to the left of the screen into the wind blast my helmet becomes almost dead quiet. I'd like to take a hacksaw to that screen.