It's day 6 of the trip but only day 1 of actually riding in Tassie. I was up at 5.45am but was awake from about 4:30am and couldn't get back to sleep due to our cabin being like Hacksaw Ridge. The ship had been docked in Davenport for some time but I couldn't be sure how long as we had no window view. It was a fairly calm trip across so that was a bonus.

After yesterdays failed effort of disembarking the ship we regroup quickly and stopped for breakfast not far from the port, at you guessed it yet another bakery. I'm starting to think that this isn't our tour of Tassie but rather the great southern bakery and pub tour of 2018. Well if your going to stop in at a bakery it may as well be the best one. 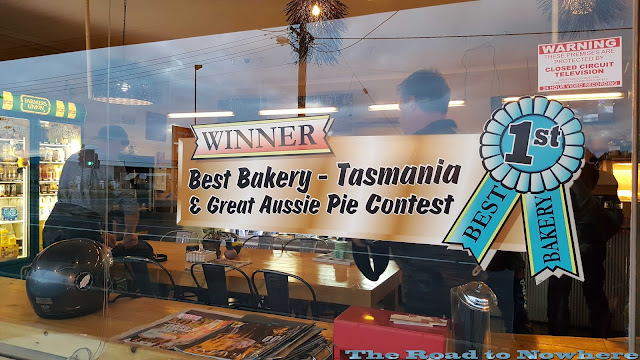 I asked our fearless group captain what the plan was for today and was surprised to hear he hadn't made any, just the destination for the night Deloraine which is in the middle of the top end of the isle. So we all hastily surrounded some maps over breaky and devised a route plan. As Bruce would be leaving us in Hobart we decided to head west and take the road through Hellyer Gorge, something I was not at all displeased about. It's an excellent bike road. Sitting eating breakfast I could feel myself rocking backward and forward, great I'd gotten sea legs, hope that's not bad riding a motorcycle with my balance being all stuffed up.

The ride out on the highway to Burnie was only a short trip of about 50km, and it was pretty cold out this morning. When we stopped for fuel in Burnie most some of us put on neck warmers if we had them or another layer. I didn't bother as it would warm up right?

We turned off at Somerset and took the Murchison Highway up into the hills, where we came through the famous Hellyer Gorge. I think the Tasmanians spelt Hellyer wrong. 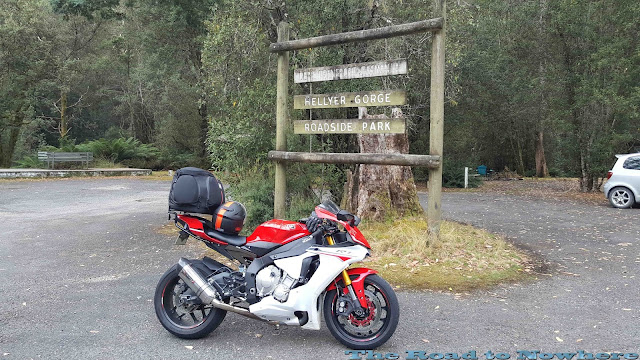 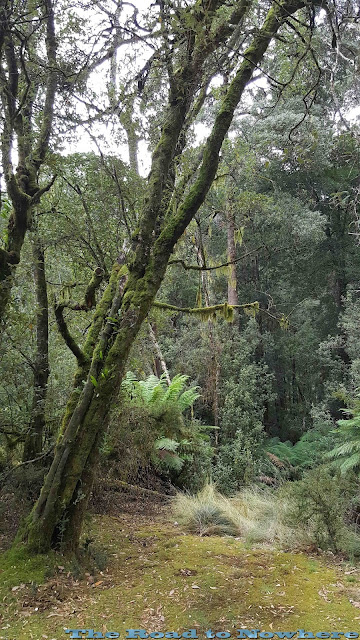 Here's a short video of the Hellyer gorge and Murchison Highway.

Heading out of the gorge chasing Geoff was a lot of fun, it was over all too soon as we headed out on some of the long straights out towards Cradle mountain. The higher we got and closer we got the cooler it became. It was down around 11-12°C. We stopped again for a, ahem boys break and I decided it was too cold and put on an extra layer as did Geoff. This is summer? The scenery here reminded me much of the west coast of New Zealand. You can see the moss in the centre of each lane. 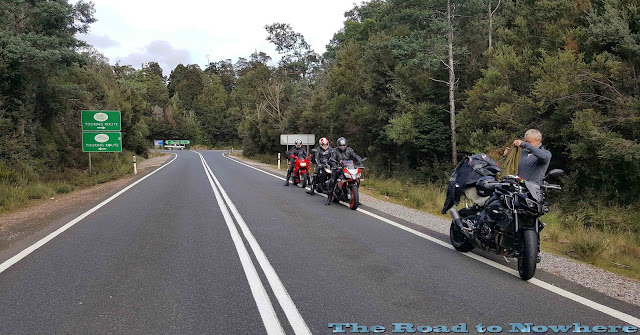 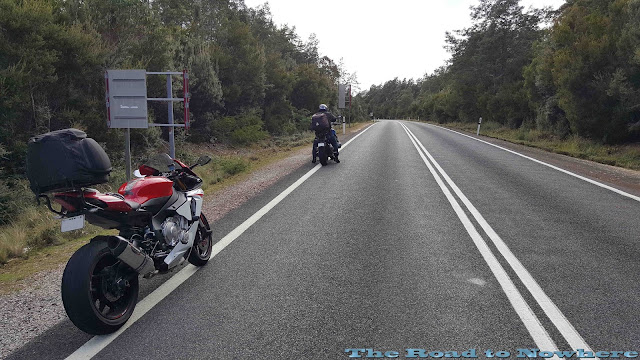 The road up to Cradle Mountain is open and sweeping up over the huge hills. We stopped at the Cradle Mountain lookout but the cloud was so low today you couldn't actually see the mountain. But the views over the valleys were glorious. 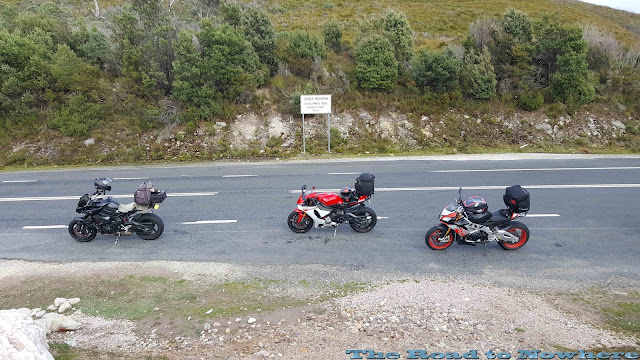 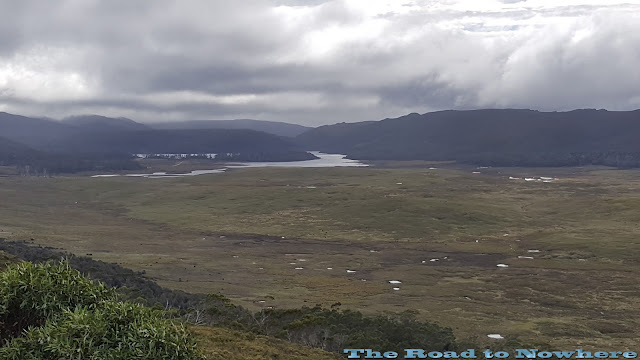 We stopped at the boom gate on the road into Dove lake and the sign said to purchase tickets at the cafe. So we rode back to the cafe and had a spot of morning tea and to warm up a bit. I would have liked to take a photo of all the bikes in front of Dove Lake with Cradle Mountain in the background but at $16.50 each to get in and to have the photo's of mountain covered in cloud it was a bit like throwing money down the toilet. Besides there was more good riding to come yet and it was only early in the day. 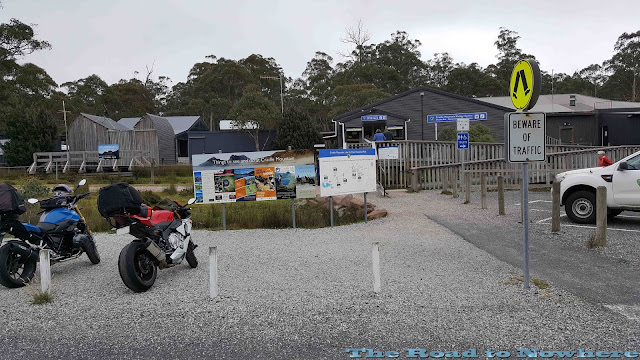 We continued on out of Cradle Mountain and headed for Mt Roland and the road that goes around the back of it to Mole Creek and then on into Deloraine. The ride along here was cold still around 11-12°C, decidedly chilly for summer. The road here was very winding and I was having a lot of fun leading the group. Coming down a large hill we could see Mt Roland looming up high in front of us only a few kilometers away. The ride down to the valley floor and back up again was good fun. 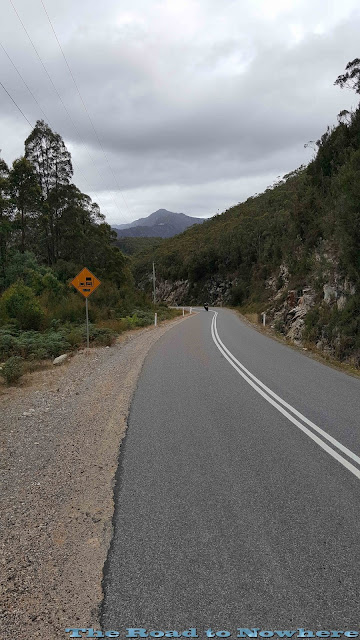 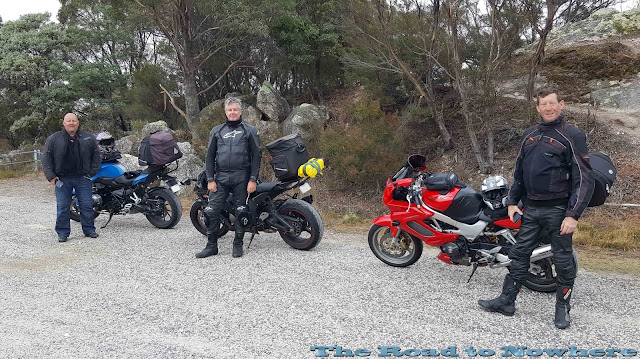 We stopped at the look out and looked down on the valley below. You could see the road winding down the hill in the photo below was the same section that I stopped to take a photo on, in the photo above. 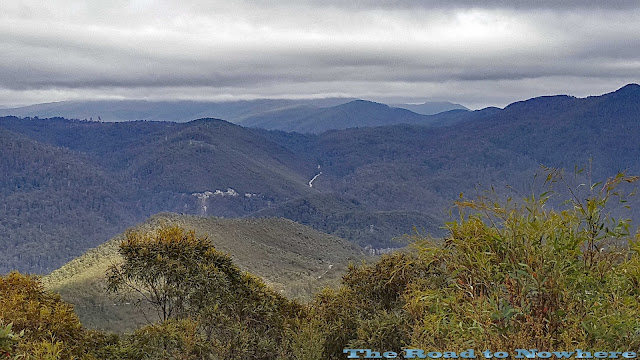 We continued on down the back of the mountain range with more superb sets of twisties. The road was just about deserted everywhere we have hardly seen any traffic since we left the highway at Burnie. We did come upon a truck in the twisties but he moved over and let us all through, not before the mighty crossplane surprised the f*ck out of him.

Making our way into Deloraine it was still only just after lunch, so we got into our rooms and dumped some of our gear and continued on up towards Exeter and Beaconsfield. 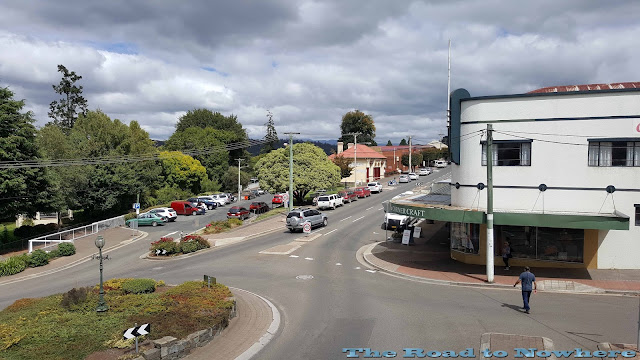 On the way to Exeter I felt a huge thump on my leathers right near my neck. Shortly after there was a painful stinging sensation in my neck. Swiping frantactly at my neck I quickly pulled over to look in the mirror, feels an awful lot like a bee sting, lucky I'm not allergic to them, just the pain from them. I couldn't find the sting as I might have brushed it off before I stopped but boy it was hurting for a while.

We made our way into Greens Beach was was quiet and relaxed looking place. There was not a sole on the beach except a guy walking his dog. Such a beautiful place. All the beaches we saw were all deserted across the whole island as well as most of the lakes, it was a bit bizarre really. 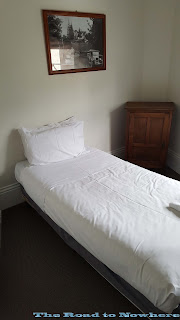 We returned to Deloraine via an alternate route out of Beaconsfield which was also very twisty through the hills and farming land, quite a nice little ride.

We are staying 2 nights in the Deloraine Hotel. It was a nice central location in the northern part of the island for days trips out and it turned out to be a great decision. It was a great little pub the rooms had been recently done up and were clean and the beds were in good condition. The bathrooms had all be refurbished and were brand new. A single room was only $50 per night. Bargain really. You can contact the Deloraine hotel on 03 6362 2022 they are highly recommended.