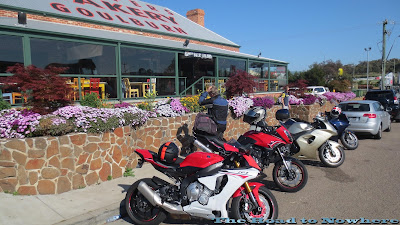 With a week off work and MotoGP on the cards at Phillip Island you could have excused me for being a little excited about hitting the road. That's an understatement if there ever was one. I was frothing at the Gib to get going as I hadn't ridden to the Island in years. I had packed my backpack as best I could. This new R1 has no luggage carrying capacity, that was my first hurdle but I didn't let that dampen my enthusiasm as Bushpig and I hit the road at 7:30. 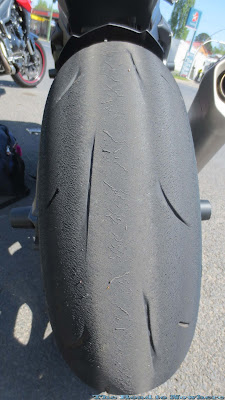 First up was the boring slab work along the dreaded Hume Highway to Goulburn which consists of long boring straights that go on forever. Goulburn was our first fuel stop and time for a quick coffee at Trappers bakery. They do excellent pies and sausage rolls here, just take the second exit from the freeway or you'll have a 15 minute ride through town, it's only a minute from the second freeway exit. The local highway patrol arrived and there was 6 or 8 of them, just after we had our coffee which I was keen to get going and leave them, where we know where they are. I'd noticed my rear tyre was balling up rubber just on this straight slab section, that's how soft these bridgestone RS10 battlax tyres are. I was hoping they would make it to Bairnsdale as I'd booked a tyre change there tomorrow morning.


Next stop was Cooma for more fuel and a cool drink. As we had been doing mostly straight roads to here with a 110 kmh limit I'd noticed that the fuel economy on the R1 was pretty good when just riding steady and it was getting figures of 4.8 - 5.0 L/100km. I was pretty impressed with that. We could have ridden to Queenbeyan for our first fuel stop but I was being cautious. I don't want to run out again and it also gives me a little break. 4 hours in the saddle and I was getting a sore ass, this seat seems to be a lot harder than the older bike.

We had to stop again shortly after in Bombala as the trumpy needed some fuel. He didn't fill up when I did in Cooma so we had another short break. Just after the photo below we had our first encounter with the NSW HWP who were hiding off the side of the road with the radar out, he was shaking his fist at us as we went past. Was it because we weren't going fast enough to book us or was it for us to slow down, I'll never know. We were only just over the limit. We knew we were going to see HWP patrol out for MotoGP weekend as its been blasted all around in the media, but it wasn't the NSW HWP we were worried about. No Vicpol are notorious for pulling some dodgy stuff. 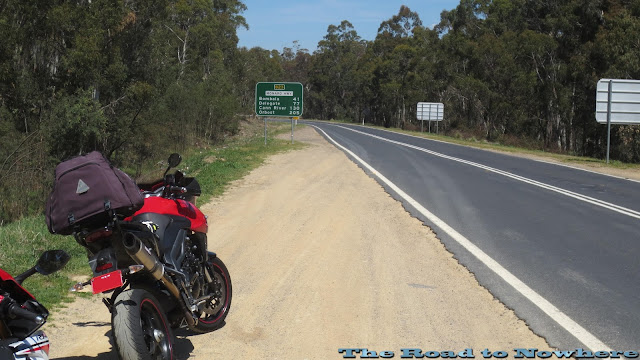 Turning off after Bombala we headed into Delegate and the Bonang Highway. There were lots of bikes heading down this way with a few passing by us a some speeds we thought were a bit fast, especially seeing it's HWP season.
The first section of dirt on the Bonang seems to be a lot shorter now more like about 3kms rather than the 7-8 kms it used to be, but the twisty dirt section is still 10 kms long. The R1 handled it pretty easily with only the occasional sliding about, Bushpig disappeared on the trumpy. Then the road gets into the thick of it with 105kms of beautiful twists and turns. Unfortunately the speed limit has been dropped from 100kmh to 80 kmh making this a perfect spot for the HWP to lurk about. 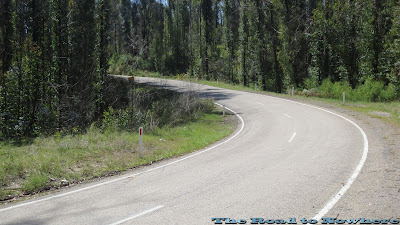 No longer than 5 minutes after the we stopped at the curve in the above picture than we came down this wee little straight in the picture below. BAM out onto the road pops one of Vicpols finest and it's all over. Nice hiding spot in the bushes. Bastards got Bushpig, and just as we were leaving they were pulling in the next lot of bikes. We spoke to that guy in Bairnsdale later that night and 3 of his mates got done and the next lot of guys behind them. Everyone was less than 20 kmh over. They must have made thousands that day. Revenue or safety - I'll let you be the judge. 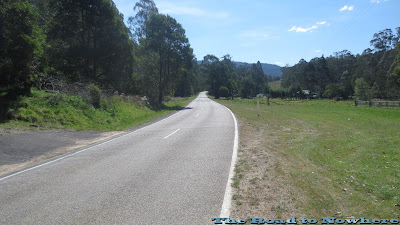 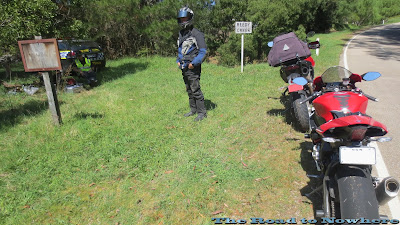 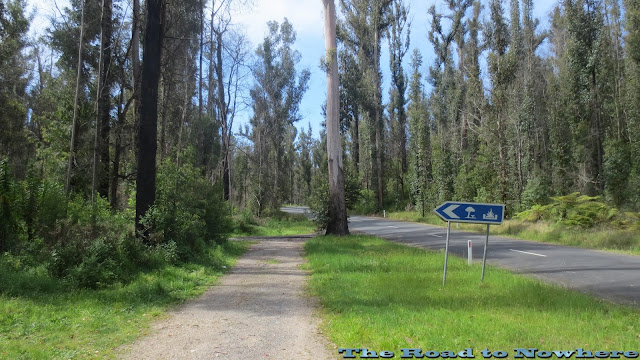 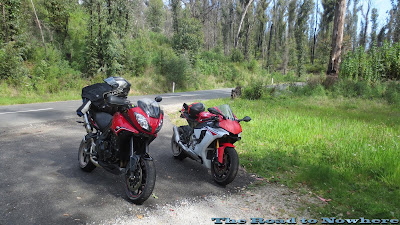 A brief stop to chat at the fire place in the above picture and there must have been 20 bikes went past us. I said to Bushpig "Look at how slow all of these bikes are going, I bet every single one of them just got done." He nodded in agreement.

We rolled on out a little more weary and with a lighter hip pocket as we finally motored into Bairnsdale late in the arvo. Filling up I noticed a pub next the the petrol station. I said lets stay here as after sitting on the R1 for 750kms was really starting to hurt my ass now and I didn't really want to ride any further. Luckily they had a room at the pub and we finished the night with several refreshing ales. 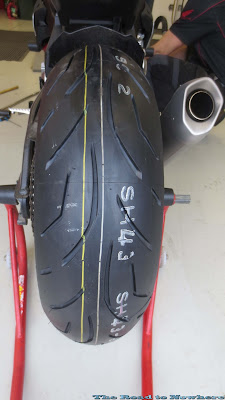 We started out by dropping my bike off at Bairnsdale Yamaha for a new set of hoops. The old tyre had just started to crack in the centre of the carcass. It was completely shot with only 2600 kms on it. I think I would only get these tyres again if I was doing a track day as they had excellent grip but oh so short life. I went with a set of Bridgestone S20 Evos.

Whilst my tyres were getting fitted we made a bee line for the main street to get a yummy bacon and egg breakfast. We were not disappointed. With our bellies full we made our way back and picked up the bikes and made our way through East Gipslands quagmire of road works and potholes till we got to Mirboo North. The victorian roads used to be in great condition compared with NSW roads but now they seem to be reversed.

We stopped in for a spot of morning coffee and a toasted samich at the Inline 4 Cafe. What a great little cafe this is with all the motorcycle paraphernalia inside, they even had a set of Casey Stoners Repsol leathers hanging up. The food and coffee was fantastic and a great atmosphere to boot. I highly recommend any bike riders to stop in here and support these guys.

Bushpig just had to have a photo with the sign below, he couldn't help himself. 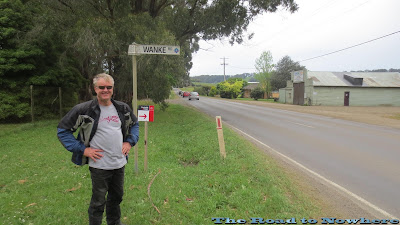 The final stretch from Mirboo North out to the Island itself was short and sweet and we were there in no time, it's a bit of a boring ride and we had to stop in at San Remo to have a quick beer to appease the motorcycling gods. Iwas glad to get off the bike as I was quite tender around the buttock area. Yes I know it's not a sports tourer.


Getting to the cabin in the caravan park at Cowes I waited for a bus to the track but it never came. The caravan park owner took pity on me and gave me a lift out to the track. There are still some good people in the world after all. I gave him the $10 that I was going to give the bus driver for beer or petrol either way he didn't have to do it and was a nice gesture that was very much appreciated. I did have visions of him axe murdering me when I noticed he wasn't driving in the direction of the track but it was all good.

After watching the last of the Aussie superbikes and supersports it was off to the camp ground for some beers with some of Bushpigs mates and other like minded people. 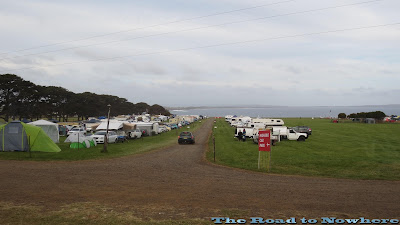