We awoke in Westport to drizzling rain which put a bit of an dampener on things but after a couple of bacon & egg rolls cooked on the hotel barbie we were feeling a bit more enthusiastic.
We got under way out of town along the coast via Capefoul wind. None of us were wondering how it got that name with the conditions we were riding in. Even though the weather seemed to be bad it didn't stop Geoff and Dave from getting in touch with their homosexual side(more on this in Queenstown day 5). 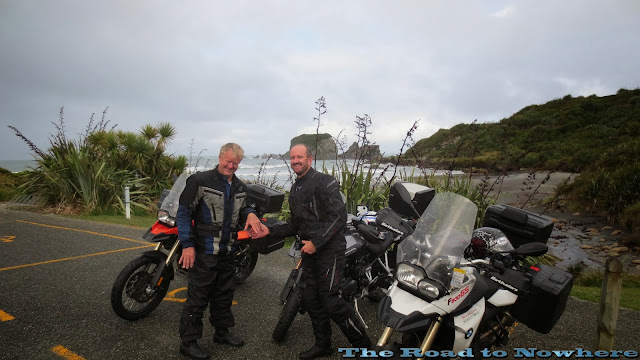 Even in the rain the west coast had some spectacular riding but I would have much preferred it in the dry. The scenery was still stunning, well at least what we could see of it anyway as the clouds were rolling in low over the mountain range and you couldn't see the tops of them. 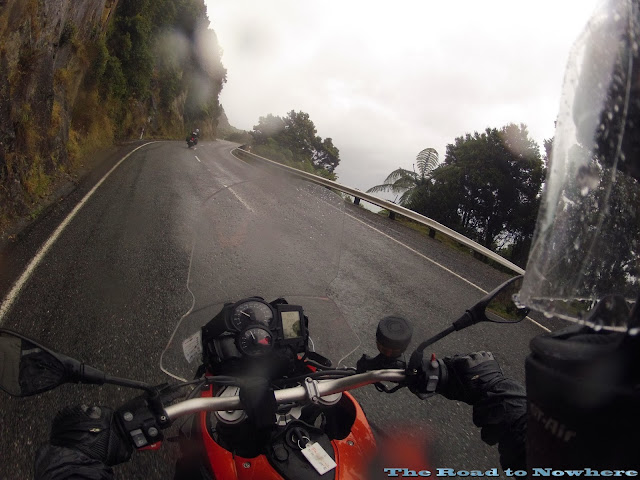 We stopped in at Punakaiki, where they have the pancake rocks and blow holes. These must be some of the strangest rock formations I think I've ever seen. I bet we scared some of the tourists walking in there in our full gear and still wearing our helmets because it was still raining although half way through the rain did stop so we got to take our helmets off. Amazing rock formations and the sea was crashing in making all the blow holes err, blow. 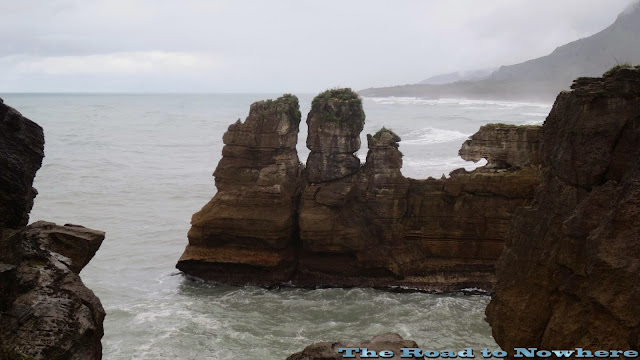 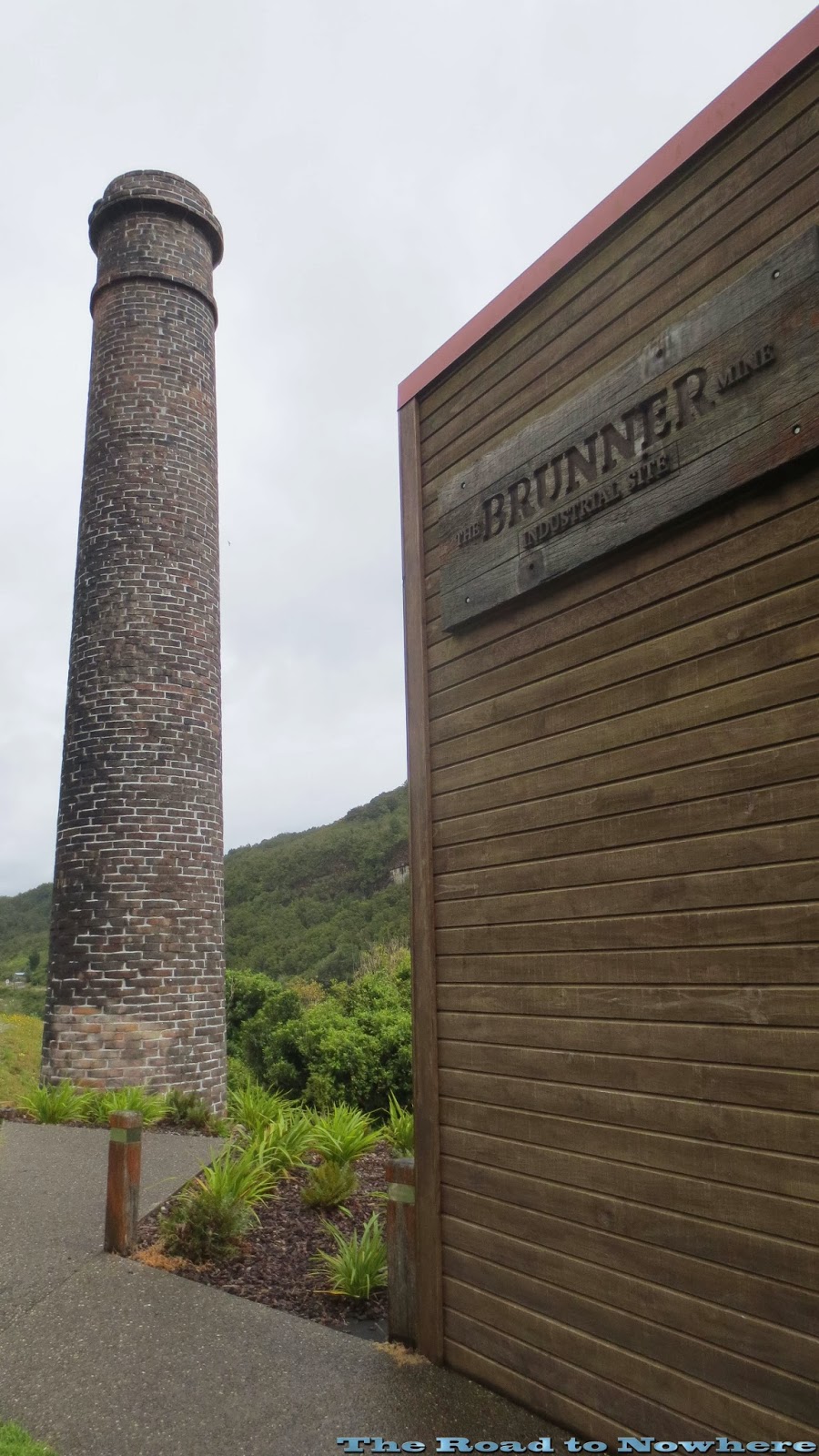 We continued on into Greymouth but didn't have time to visit Monteiths brewery, ah well we will just have to be content with drinking their pure beer goodness at the local pub. It had stopped raining by now and was just overcast. After Greymouth we passed by Historic Brunner Mining site. After that we continued on into Reefton. It was along here that I was about to overtake a car and decided not to as I could see a railway crossing ahead with a 45kmh bend on the other side. It didn't stop Geoff from barrelling past at ridiculous speed, I could imagine the expression on his face as he accelerated into that 45 bend at about 130 or so. We had a good chuckle about that one at the pub later. We stopped in Reefton where we stopped for fuel and a break before we went up over the famous Lewis Pass.

Unfortunately for us as we were leaving Reefton it started to rain on us again. Not heavy rain but just enough to wet us and the road. The road itself was a beauty winding its way for ever up the pass in through heavy lush forest all the way. Once we reached the summit and started to come down the other side of the pass the rain eased up and stopped and the roads dried up making it much more enjoyable. 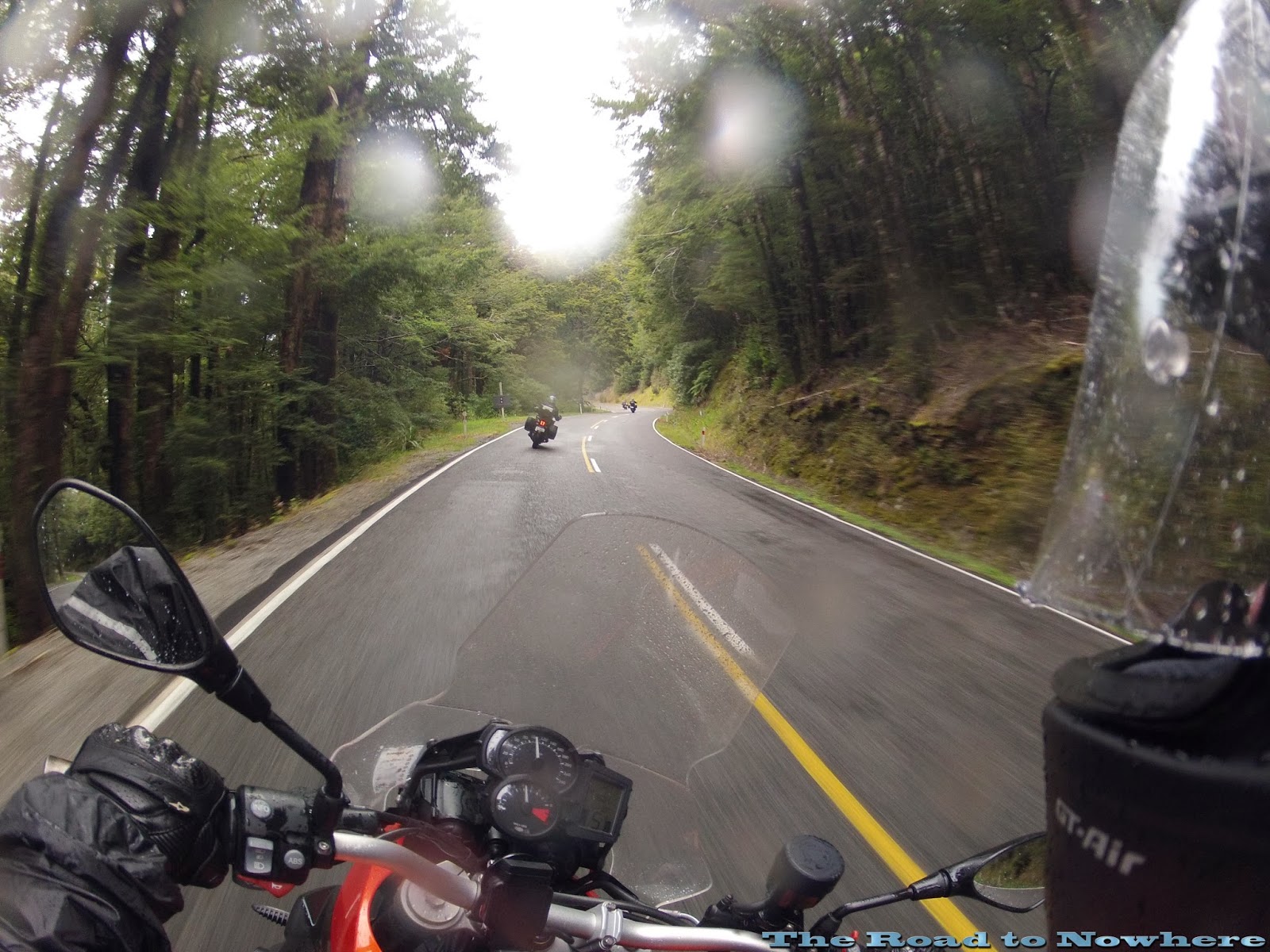 After the top of the pass I noticed that the scenery start to change fairly drastically from lush forest to a more harsh and steep barren mountainous landscape. This must look magical in winter when there is snow on the peaks. There was no snow now being the middle of summer, the temperature at the top of the pass was about 8°C and wet. I was using the heated grips though here. They felt weird using them with the top of your hand being cold and underneath being very warm. It felt like I was holding on too tight. Just a weird feeling. But coming down out on the Hanmer springs side of the pass the temp soared back up to about 20°C and nice and sunny so I turned them back off again when it warmed up.


The views along here were stunning with huge valleys and steep mountains with rivers tracking along the valley floor. The roads opened up into some really big sweepers here which allowed us to open the bikes up a bit more. And I can attest to the fact that the BMW does go bloody fast. I was lucky along here as the local constabulary was coming the other way about 1 minute after I was zooming along bloody fast which made me slow down in a hell of a hurry. I can see why they patrol this section of road, it must be easy pickings. 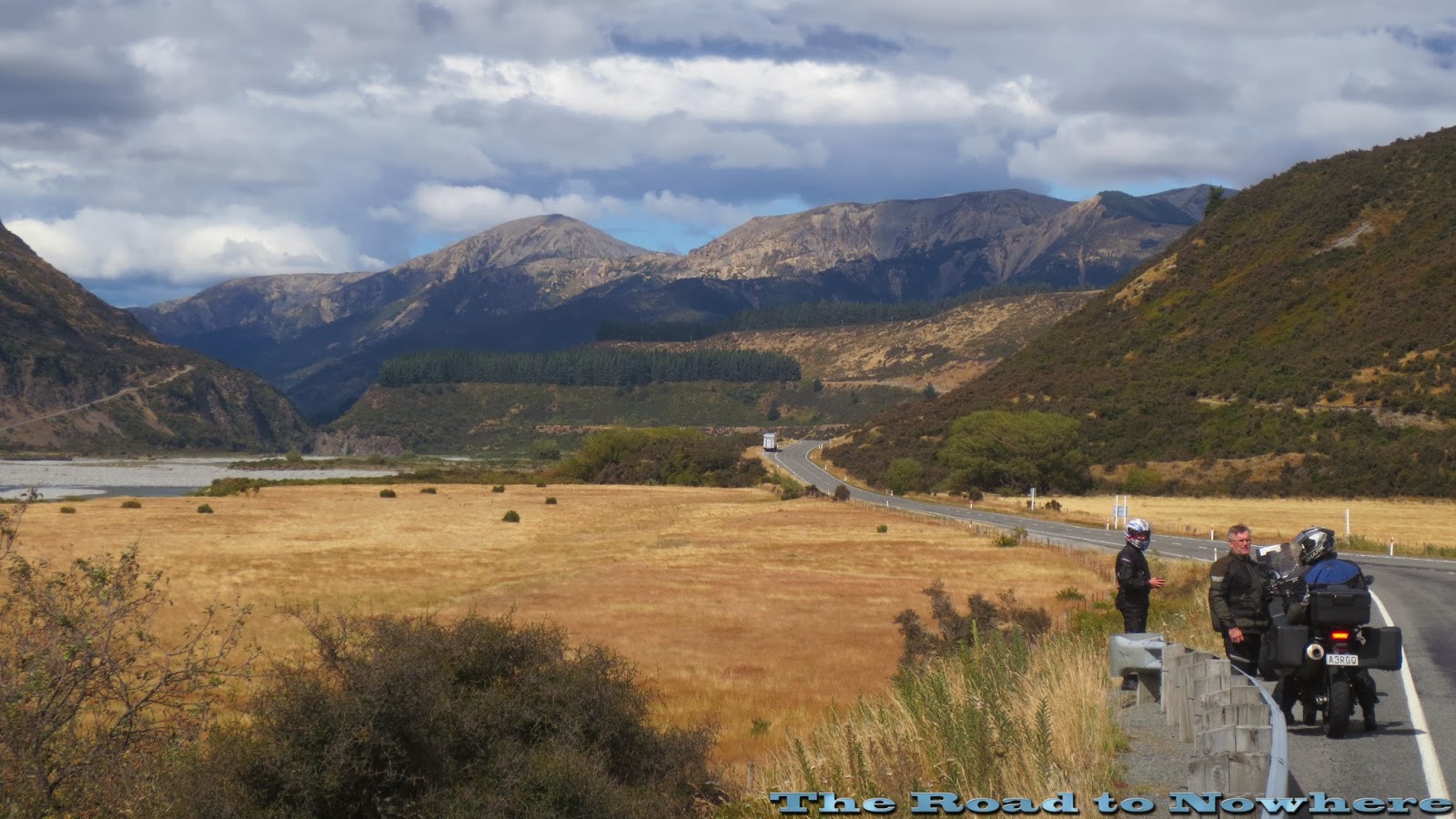 The road flows along next to the Waiau River until the turn off into Hanmer Springs. This is the same river we stopped on the bridge and photographed on day 1 of the trip as we headed up the inland scenic route. 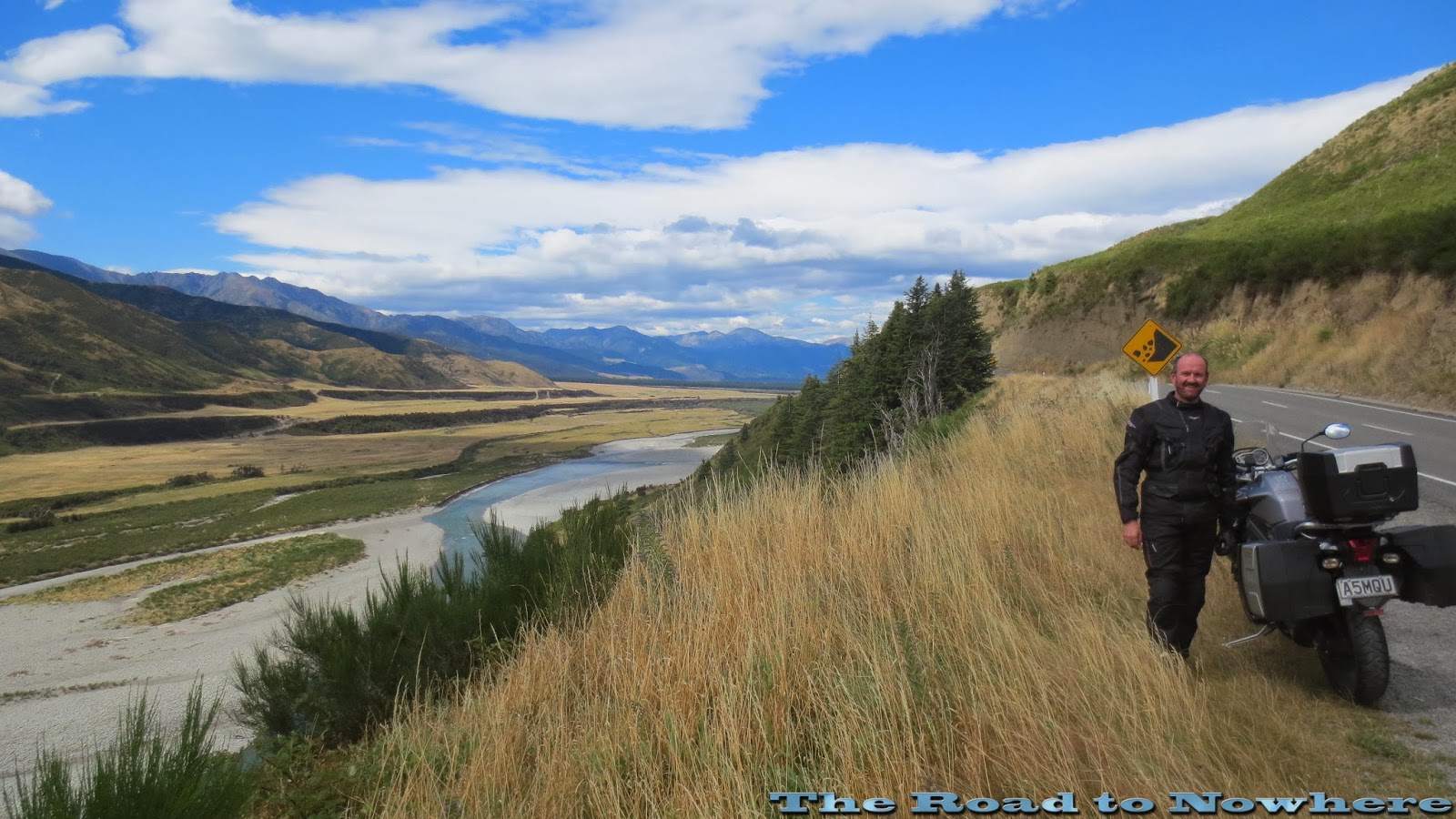 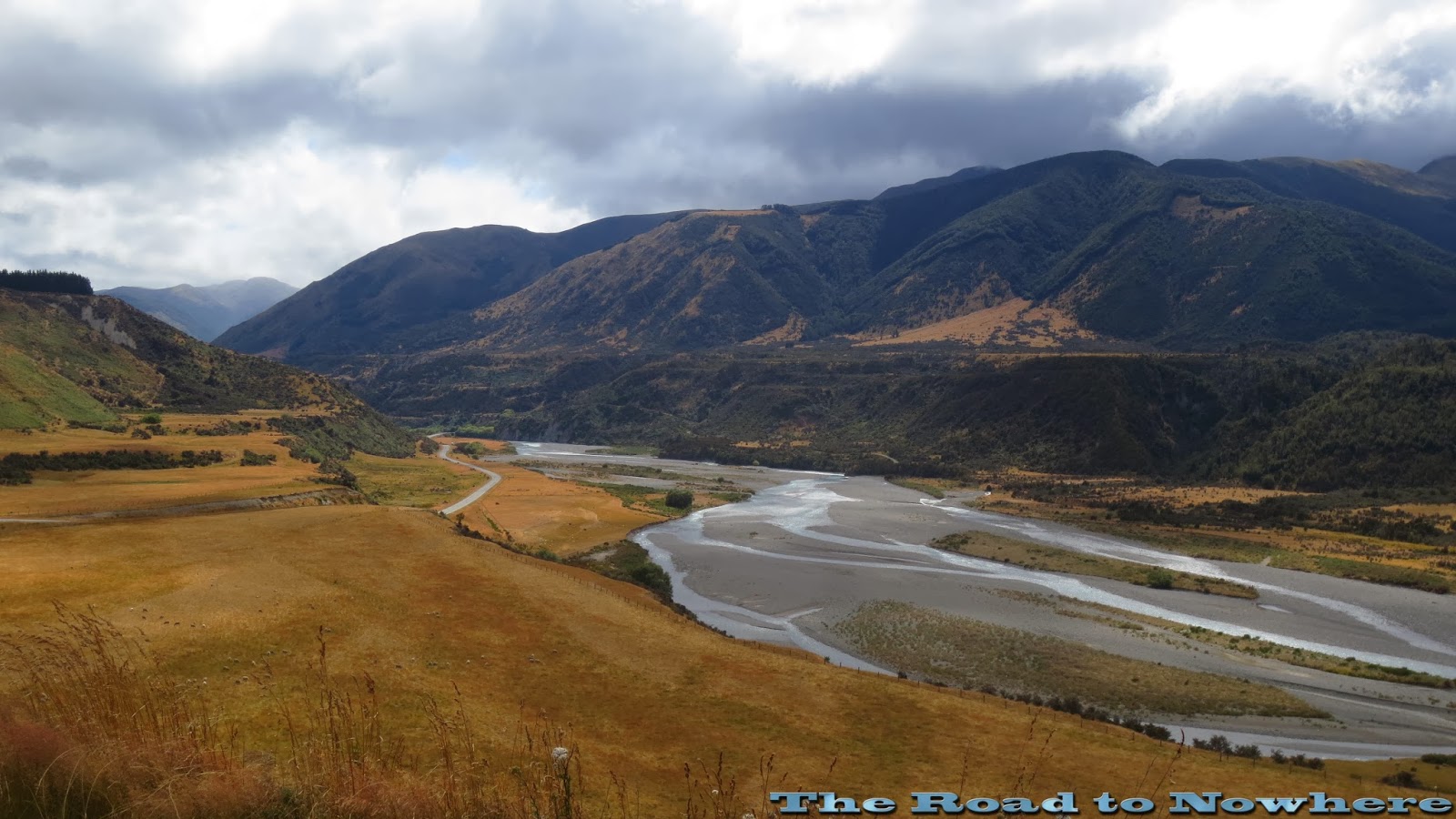 We finally got into Hanmer Springs fairly late in the afternoon even though this was one of the shortest days we would experience on the road. Everyone was itching to get out and go down to the hot springs and thermal pools. I didn't get any photo's whilst at the pools but they were very relaxing just lazing in the hot water checking out some of the local talent. We stayed here at a place called Jack in the Green which turned out to be pretty good, cheap and clean. We ended up back at our room relaxing and having a bbq and beers in the green. We had a big day planned for tomorrow with an early start so we didn't have a big night.

If I'd begun to hate the screen on the beemer in the dry then I was really loathing it in the wet. Rather than have water bead off to either side of my visor it was beading straight down then flying off and I could see it going up,down and then swirling around and sometimes flying back in through my slightly cracked visor and smacking me in the face. Annoying to say the least. Where is that bloody hacksaw.

Even though it rained for about half of the day we still had a fantastic time especially when it dried up coming down Lewis pass to Hanmer. Fantastic scenery.

Here's the map of day 3 riding from Westport to Hanmer Springs via Greymouth.