Everything old is new again

Bandwagons - We've all been on them at some stage of our live's. Whether that be fashion trends, music trends, political or environmental. We are currently caught up in the hysteria of everyone wanting to save the environment, the next big bandwagon. FFS I can't wait until this madness derails and crashes and burns as quickly as a disney Star Wars movie.

I've never been big into old things much preferring new over old. Technology never stops advancing and there's a never ending supply of new product to replace the old that are somewhat better in every way shape and form than the previous generation. Motorcycles are no different.

I have tried to like older bikes in the past but just can't seem to drum up the necessary interest for some reason or another. However in the last year or so I've found myself looking at certain bikes with a bit of an nostalgic eye, lusting after them in their original forms. I absolutely love the original 98 R1 to bits, it's the grandfather of my current ride after all. If I can find one cheap enough I think it will have to come home with me. 3 R1's in the shed......mmmm think that will be grounds for divorce. Haha.

There are a couple of other bikes over the 20 year old mark that also take my fancy. Funnily enough these bikes are all from my youth as a young wide eyed learner motorcyclist. I'd love to have one of each of these parked up in the garage one day; 93 Fireblade, 93 ZXR 750, and an Honda SP1.

So recently I have dug the old R1 out of the garage and it's received some much needed love and attention. Time to get the old girl going again. There are things afoot here at HQ. 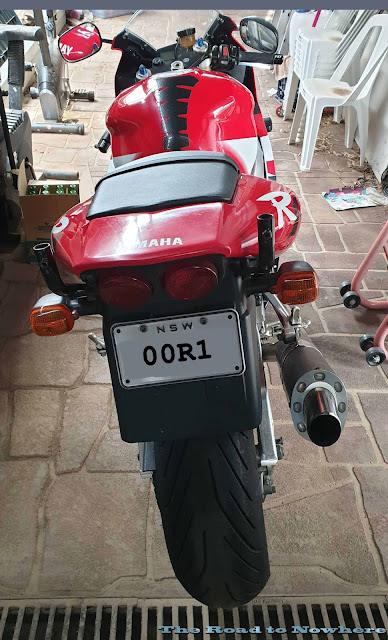 As it hadn't moved under it's own steam in 5 years it was time to get it registered and then for some lovin.

It was relatively painless to get it blue slipped at TeamMoto in Blacktown then the CTP. I then proceeded into the RMS to get a new plate and rego papers.

First up was the fact I needed some fuel or this would be a short lived trip. I filled the tank with some new premium 98 fuel. I noticed it was running a bit rough below 3000 rpm, probably stale fuel or blocked fuel filter.

Brake fluid, hasn't been done for 6 years. Time to change it. 5 Minutes per brake line and  it was done. The old fluid colour was very dark compared to the new fluid.

I'd bought a number of spares and I made sure my sunday was free'd up so I could spend some quality time with the bike and me, oh and no kids. Sounds a bit selfish but I had an excellent time spannering. I enjoyed it more than I thought I would. The kids wouldn't come near as I might put them to work, and kids are allergic to work.

First up was to remove the tank and open up the air box. I was surprised it was pretty clean inside I replaced the air filter with a new one. It didn't look that bad until I put the new one next to it. It's the first new air filter in 20 years so I can't complain.

Next job was to replace the fuel filter. I wonder what the old one will look like inside. Fuel filter 0, Hacksaw 1. The filter looked pretty dirty inside. Once back together the rough running under 3k revs went away., so the filter looks like it did the trick. It was only $20 and took no time to change. 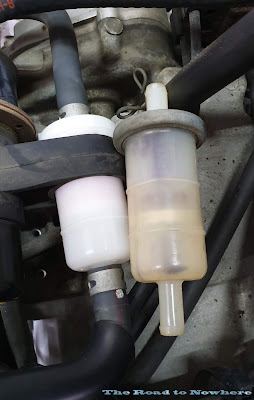 Onto the next job then, replacing the spark plugs. They probably don't need doing but if I do them now I probably won't need to do them again, ever. With the old plugs out I took a look at them and they didn't look too bad in all reality. I put the new one's in and turfed out the old one's. 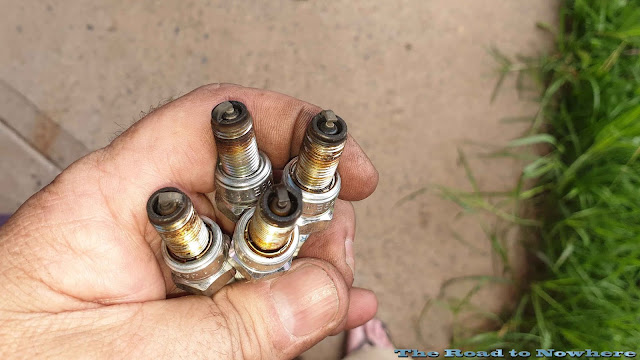 The last job on the list was to flush the radiator coolant and replace it with some Engine Ice. I've heard that this Engine Ice is meant to be good stuff. The R1 would run hot when in stop start traffic in hot weather, up over 110°C so we shall see if it runs cooler. Only one way to find out I guess. I'll let you know how it goes later on when I report back after the first ride. 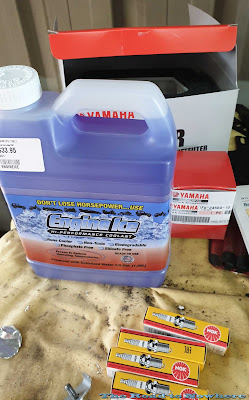