We had a bit of a late start today as we had a late night at the pub, but that's ok we only have about 330kms to go today. We had a quick breakfast in town and it was the only place open. I had to fill up before heading out and it must have been one of the most expensive places of the trip. I put 8.24 litres in which cost $20.43 which is $2.48 per litre, OUCH. That's probably the reason NZ's roads are nearly empty, petrol costs too much. We then headed out to have a look at Fox Glacier which was only minutes from town. It was a beautiful day today not like yesterday so maybe I will actually see the glacier today. When I was here in 2007 my wife and I did a hike up the glacier onto the ice and tramped around, it was fantastic.


We didn't do the walk up to the terminal face of the glacier as we didn't really have time for that but we did get pics of the top of the glacier coming down. I should think after seeing Franz Joseph retreating so far, that Fox would be much the same. Its still spectacular what we could see. All that ice moving down the mountain side at a blistering pace of 1 metre per day.

After riding up the southern side of the river we rode back around the northern side which most people access the glacier by to see what we could see. Dave was coming back down as we went up there. He said he couldn't see much and that it would be an hours walk to see it. So we walked down to the swing bridge over Fox river and looked up the valley towards the glacier. We couldn't see it here either but we did have an awesome view up the valley towards the bottom of the glacier. All that water is running straight out of the glacier. It's icy cold and would be good for cooling down some beers with.


The photo I took above in February 2014 shows the difference in the size of the glacier since I was here last in September 2007. Both of the glaciers have retreated quite some way, I would have liked to have gotten a closer look and compare some more photos. Think global warming is just a myth. Think again. 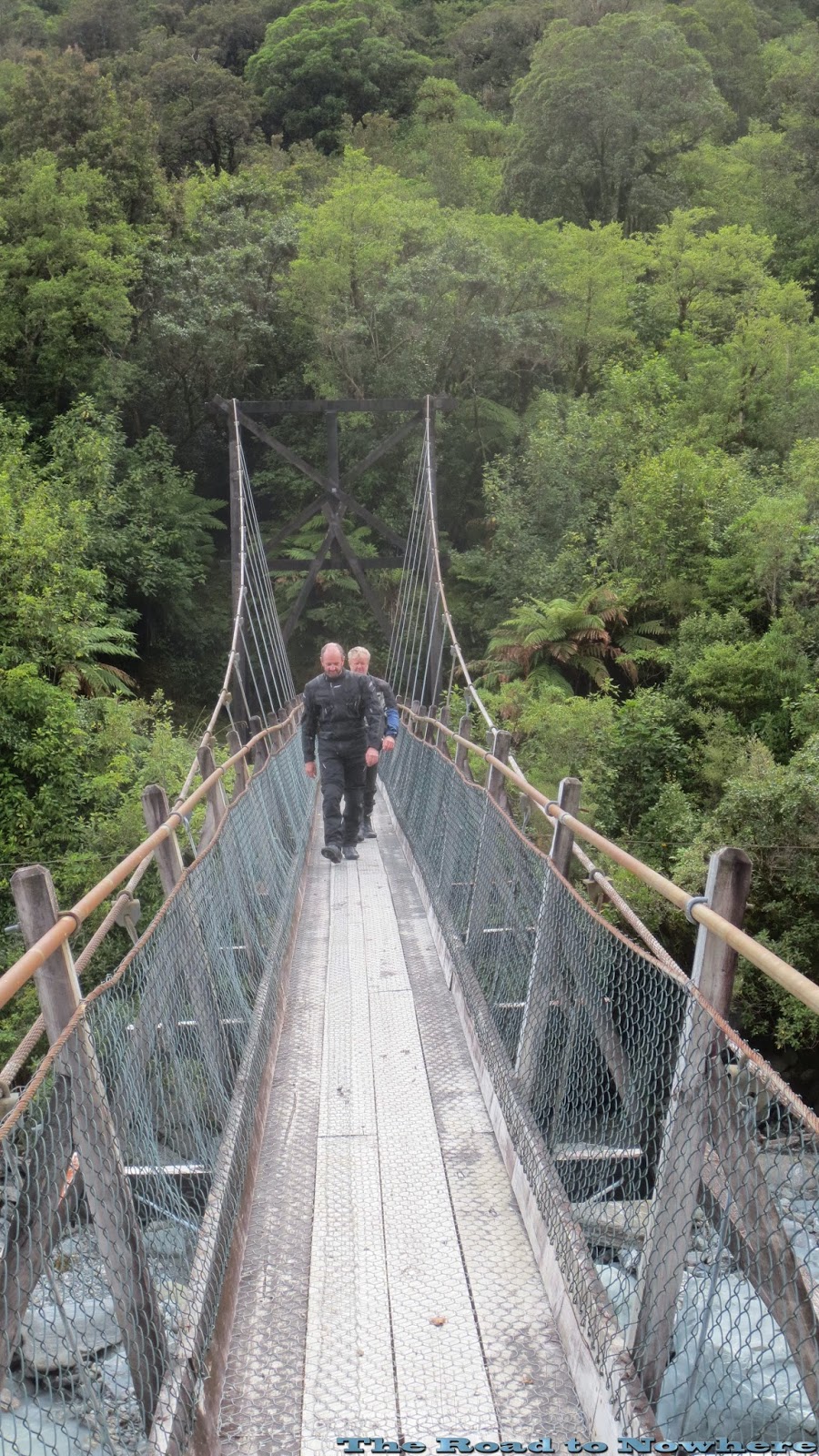 It was so scenic and relaxing here above the water. The roar of the water was actually pretty loud in an otherwise quiet and tranquil location. So beautiful. If I lived in NZ I think it would be an annual pilgrimage to visit the glacier and have a historic pictorial of them at different spots on the mountain side each year.

We headed off back down the West Coast taking in some amazing scenery and luckily we had nice dry warm conditions to do it in too. The road down the west coast has it all. Mountain views to the left and sea views to the right, sweepers rising up and down over hills, long straights, short bursts of twisties. It's hard to go wrong along here. We stopped along one beach front and a couple of small pods of dolphins swam by. There was one section of road works that was very tricky to ride through, and myself and Geoff had the GS's sideways there for a bit. Lucky we didn't have sports bikes otherwise I think we would have bit the dirt. 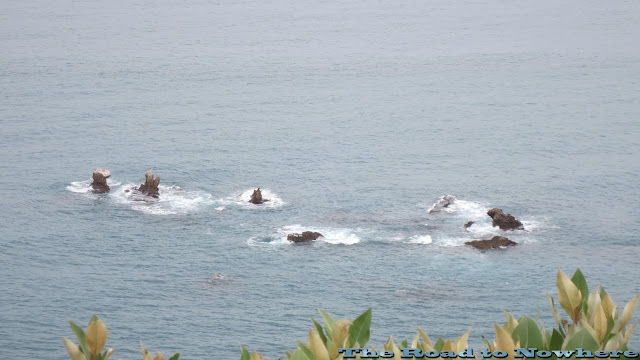 Further south the road wound its way up the coastal hills till we came to to a place called Knights Point lookout. We stopped in for a couple of photo's and take in the view. The view was beautiful. It was here I uncovered Geoff's drug lab but am unsure if he was running a gambling and prostitution racket as well. 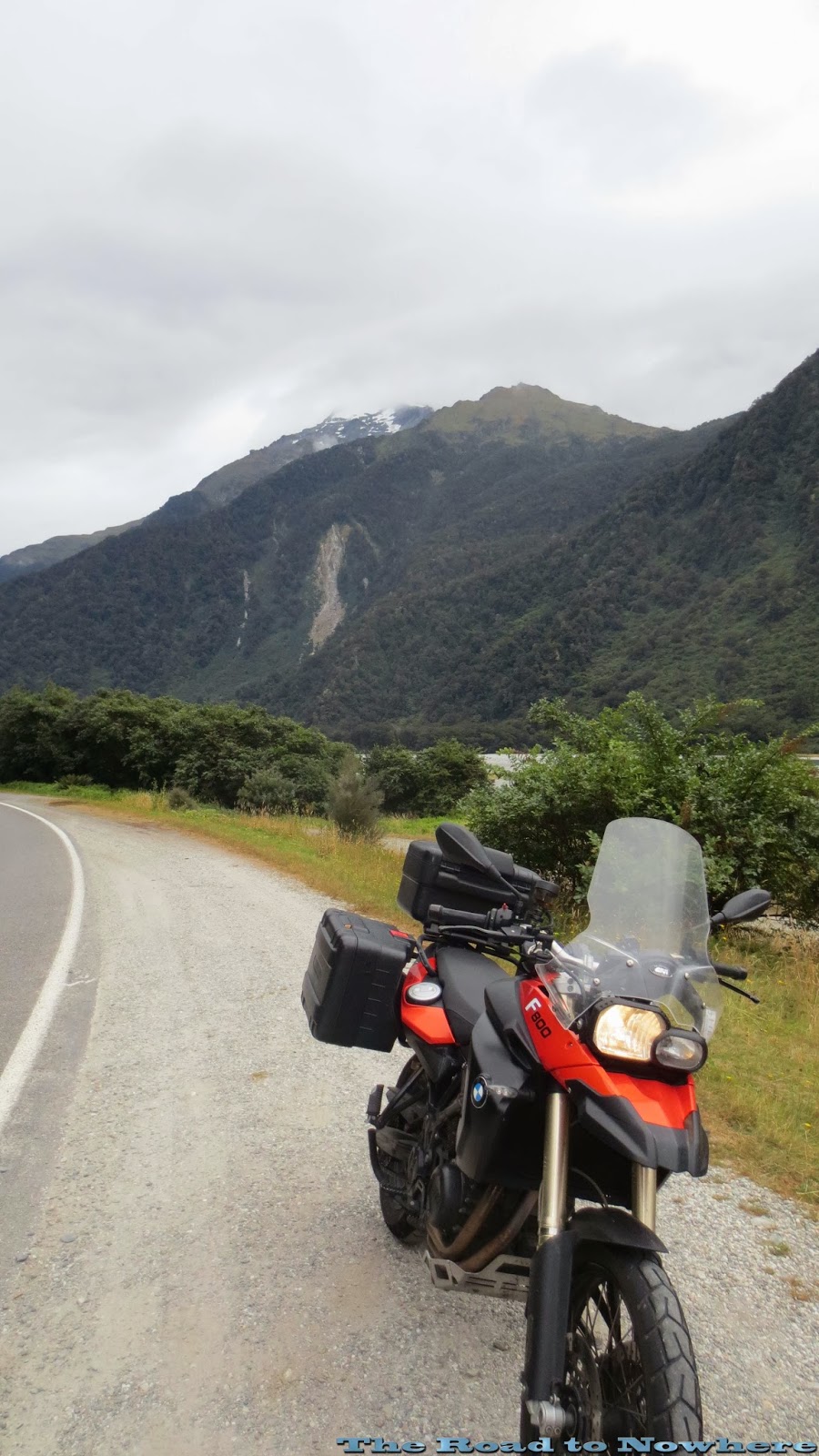 We briefly stopped in Haast village and had a quick coffee. The coffee here was pretty ordinary and it was 4000°C. We headed off and went up Haast Pass. Fantastic riding all the way along much like Lewis Pass but with huge mountains on either side of the valleys. There was still small patches of snow on some of the higher peaks. The road here winds its way through Mount Aspiring Nation Park and when it finally comes out of the mountains the road then winds its way along Lake Wanaka with beautiful views of the lake and surrounding mountains. Wow does it get any better than this.

Below is a short video of some of Haast pass. 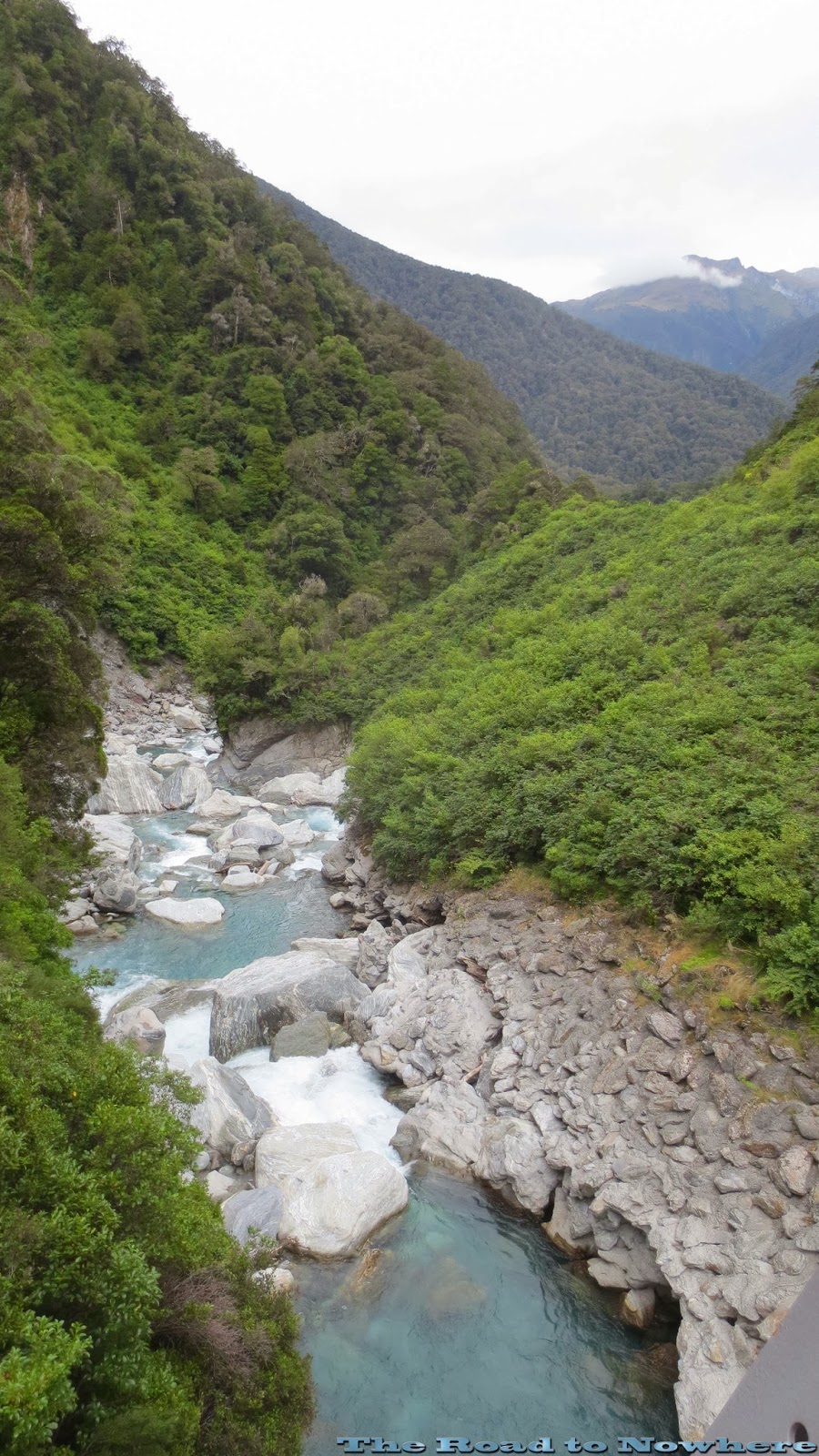 One thing that New Zealand has a lot of is one way bridges. There are lots of river crossing and nearly all of them are single lane even on major highways. It fits in well though and with the scenery as it is it just adds to the atmosphere of the place. This one in Haast pass is no exception, the river running beneath is crystal clear. I'm sure there would be some good fishing here.

There are some fantastic little water falls literally 2 minutes walk from the side of the road along here. Fantail falls, thunder creek falls and the blue pools are 3 short walks from the road with fantastic views. Tourism New Zealand is going to need to start paying me I think. 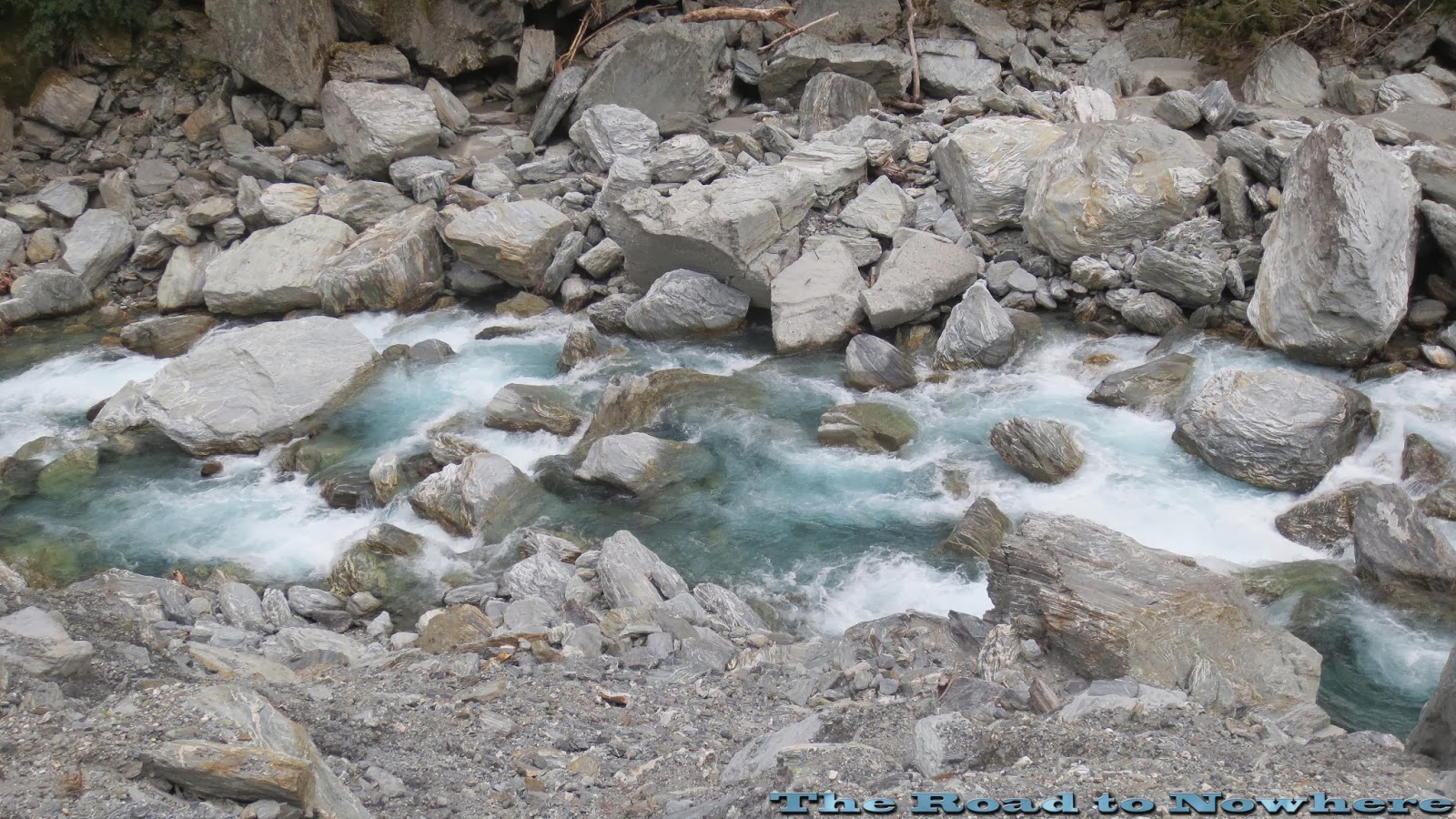 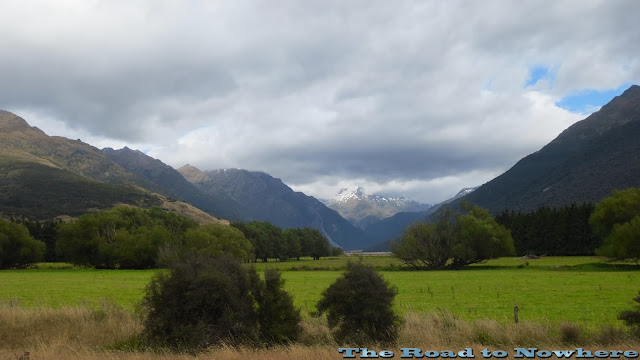 Coming out of Haast Pass brings you out through some lush farming land before coming to Lake Wanaka. The road twists its way along the edge of the lake and the mountain. This is excellent riding along here I really enjoyed this section and then the road crosses a small pass called the Neck and the road then follows along Lake Hawea. As you crest the hill between the two lakes at the neck all you can see is the crest of the road and a huge mountain looming up over the road growing increasingly bigger until you pop out and can see the lake and surrounds. Absolutely beautiful stuff and excellent riding.
Here is a short video along Lake Wanaka.
.


It didn't take to much longer before we got into Wanaka and refueled the bikes and had a quick bite to eat along the water front. Wanaka is a fantastic town, it's one of those places you could retire to. We soon departed for the Crown range road towards Queenstown. I'd driven this road before and it was fantastic in the car and it was even better on the bike. The Wanaka end is just a long series of sweepers and straights until Cardrona when it then gets a lot more winding and a hell of a lot more fun.

One thing I wanted to do that was a must was to stop in at the Cardrona Hotel and have a beer. It's a great little pub with a huge beer garden out the back. I wish we could have stayed here but we had to continue on. 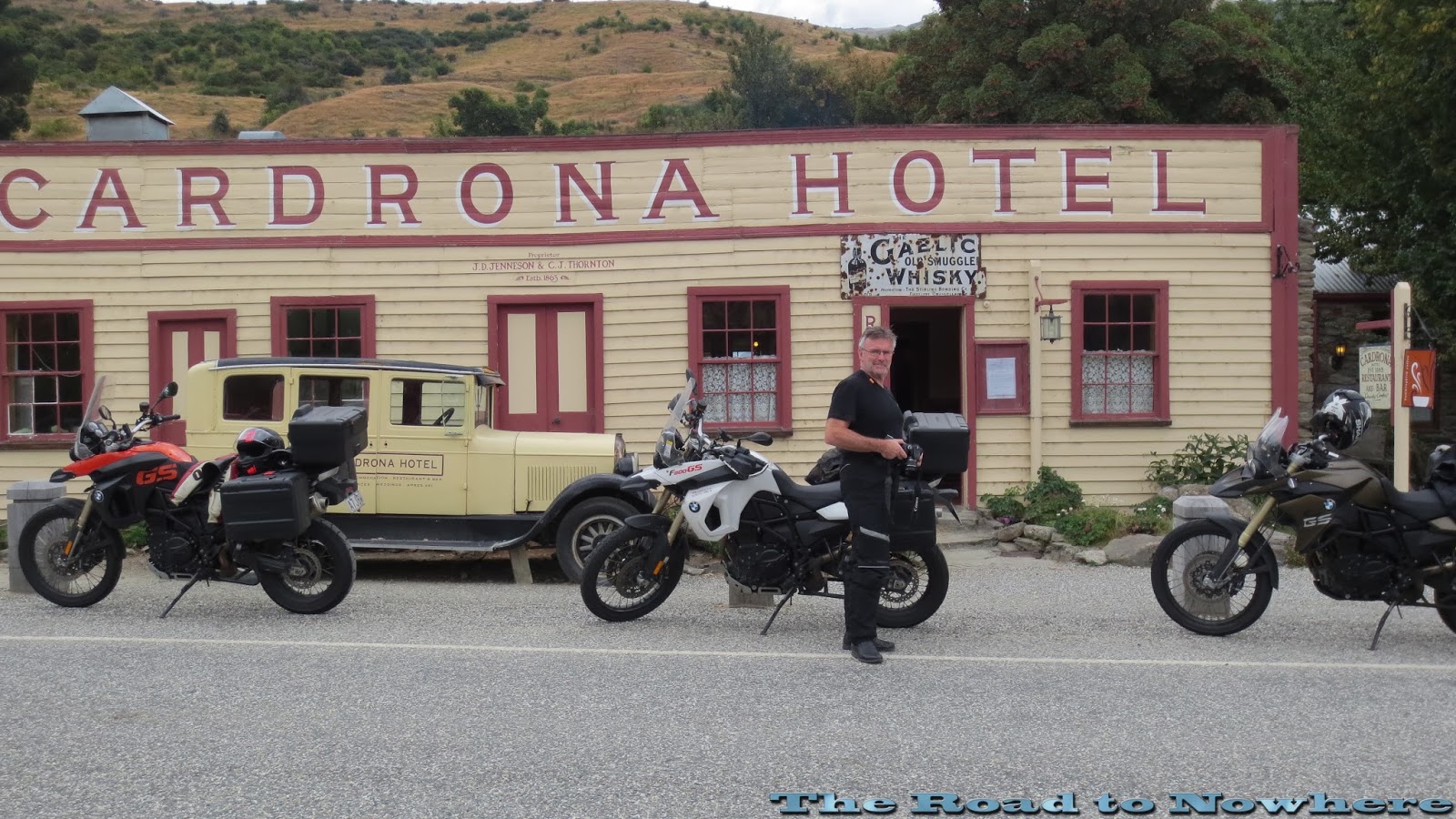 Crown Range Road is one of those roads when you're in New Zealand is a must not miss road especially if your on a bike. It was a fantastic ride up and over the pass and down the last set of twisties. This is also New Zealands highest road at 1076 metres (3530 ft). I looked into it and its 10.4 kms and 47 corners with a 1076 meter descent. I was surprised a bit that it wasn't higher as back home the great alpine road at Mount Hotham is 1840 metres (6040 ft). Most of the roads in NZ seem to be fairly low but thats probably because their mountains are so steep that it was easier to build the roads at the bottom of the mountains and drive around them.


At one of the lookouts on the way down the mountain we noticed this huge rock concert in the field below. One of the people in town said that Lynard Skynard was playing and they had about 15,000 people in at the concert. That's why it was so hard to book some decent cheap accommodation in Queenstown that weekend.


We got into our accommodation early compared with the other days which allowed us to go into town and have a bit of a look around. I personally love Queenstown it's got that big country town feel with City type stuff as well. I lot of kiwi's we met didn't like Queenstown because it's too busy. It's not too busy when you come from a city of close to 5 million people, its still a little country town to me with a heap of up and go.

It was particularly busy in town tonight probably due to the music festival. There were a few buskers around town plying their trade and one in particular was very good. He had a piano with the front panel off so you could see all of the internals and when he played you could see the hammers hitting the strings. Such a good talent I even bought his CD as it was only $20.

Geoff and Dave said "This looks like a good place to have a drink". So all four of us went in and we ordered a jug of beer between us. We sat down and I took a look around, it was a dark seedy looking place and there were 4 or 5 guys sitting inside the bar and about 8 or 9 outside. I then saw that Bros "When will I be famous" on the video music system.

ME: "Hey fella's I think we're in a gay bar"
Others: "Nah it's not, what makes you say that?"
ME: " Look there's only guys in here and what pub plays this gay shit music?"
Others "Nah it's not, it's all in your head"
A minute or so goes by with some even more gay music coming on the music system.
ME: "Well if this isn't a gay bar why are those 2 guys cuddling and kissing each other. Drink up fellas"

To which we duly finished up drinks pretty quickly and headed elsewhere for a beer.


Above was the view from the front of our room at our accommodation. We stayed at Reavers Lodge which is pretty much like a backpacker/ski lodge type of thing. We were pretty squished in with 4 of us in one room, and in hindsight it would have been better to get 2 rooms. Whilst we were out we booked in for the shotover jet ride for tomorrow and the guys are looking at doing some other things as well. Tomorrow is a rest and relaxation day where we don't really need to ride anywhere as we are staying in Queenstown for 2 nights.