Wow I can't believe that this is our last day of riding through Middle Earth, it has come around so fast. We awoke this morning to beautiful clear blue sky's thankfully as the ride up to Mt Cook wouldn't have been the same in the rain as it was yesterday. The views along here were breathtaking to say the least with the beautiful Lake Pukaki along the right hand side with massive mountains to the left with sweeping roads all the way along. We couldn't have asked for anything better than this and it is the middle of summer and there is still lots of snow. The perfect send off for our last day. Mt Cook is New Zealand's tallest mountain at 3,753m(12,313 ft). It's a striking feature of the mountainous sky line that stands out above all else around it making it truly remarkable. 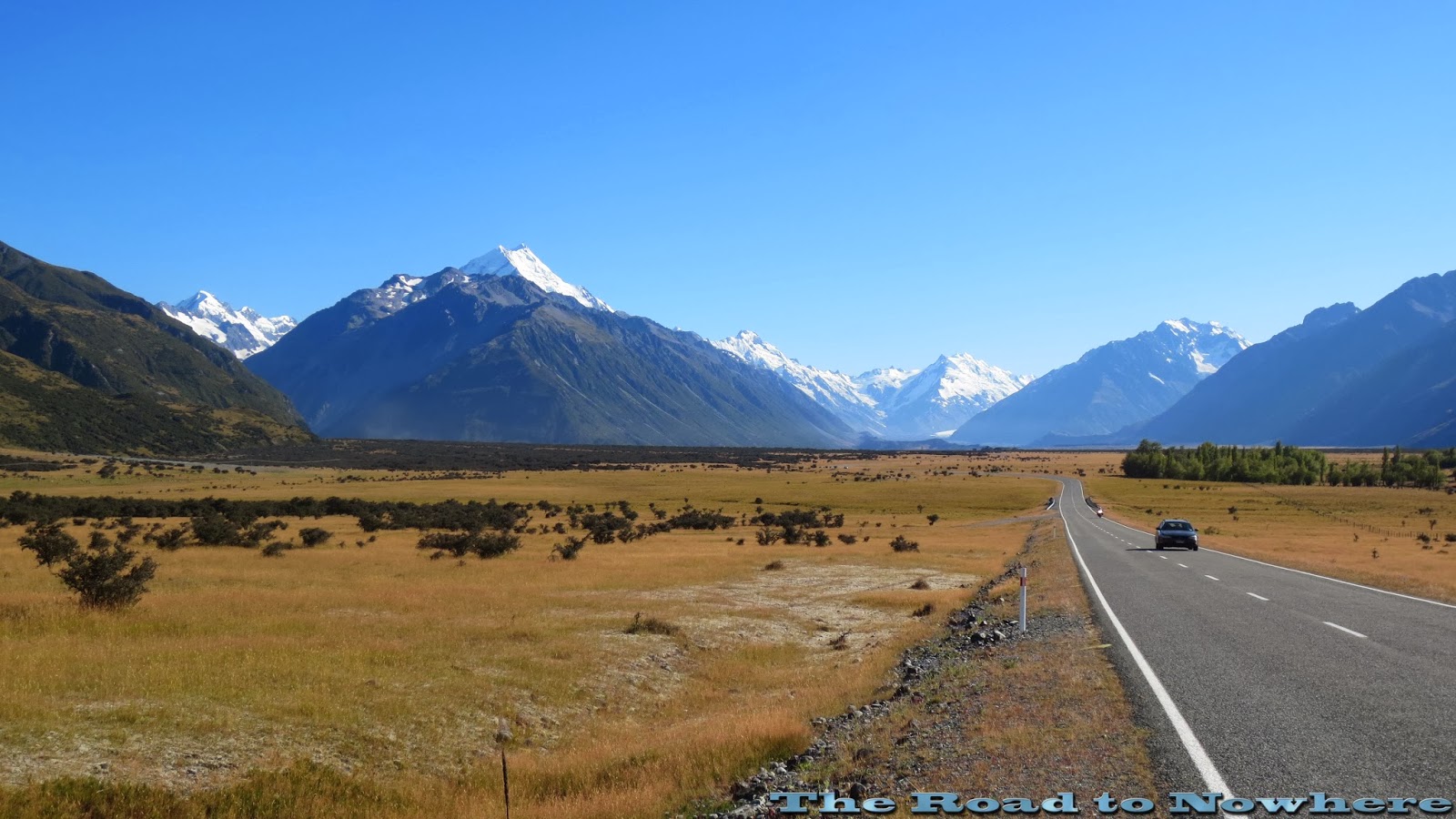 The road along here has a lot of straights with big long sweeping bends. Initially I was hoping it would be a bit tighter but realised that if it was then there would be far to many accidents as people would go sailing off into the scenery because you just can't help but constantly look at the scenery.


We couldn't help stopping every few kilometres to take in the views and get some photo's. It seemed to be that the closer we got to it the more we stopped to get out the cameras. It felt like we were on a photo shoot!

Here is a short video that I have put together from the entire ride to Mt Cook that I've cut down to 4½ minutes. 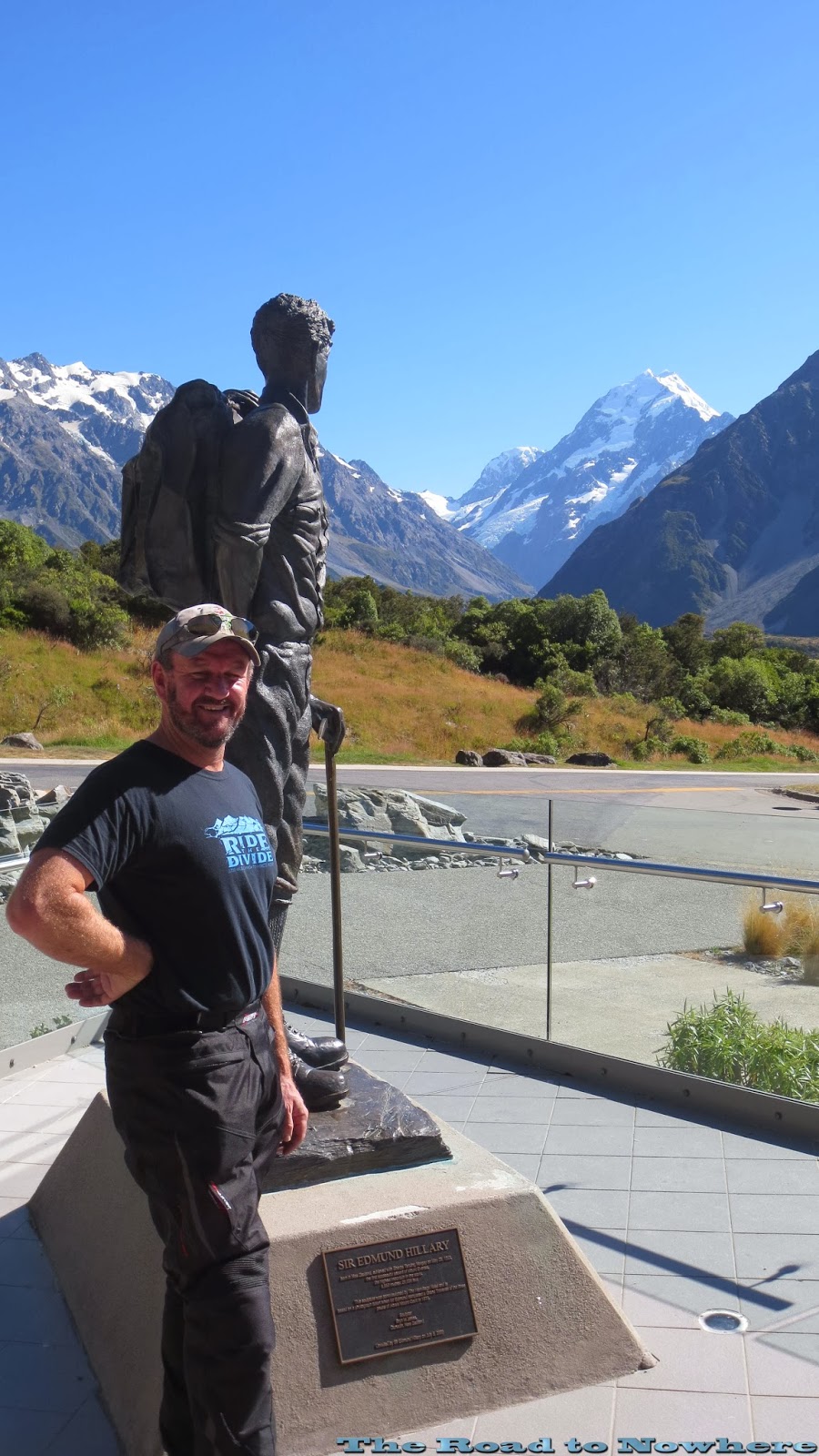 We stopped in at the Cafe at the Hermitage for some morning tea and soak up the atmosphere of this place. Dave had an excellent suggestion of a aussie meat pie smothered in tomato sauce and a cappuccino. What a place, we just sat there and soaked up the atmosphere. Ah this is heaven. The pie was fantastic and the coffee was great too.

Wayne and Roosty had gotten separated from us on the ride in, so we didn't know where they went. I was sure Wayne would be getting a coffee but we didn't see them there so, we decided that they must have set off so we too got on the move again and took off back towards twizel. We turned off then towards Lake Tekapo, the road skirted around the bottom of Lake Pukaki. The water here is this stunning turquoise blue colour. I think Dave was just about photo'd out as he couldn't be arsed getting his camera out. Stop stealing my photo's you bastard!

It wasn't long before we were riding into Lake Tekapo but before we actually got into the town I wanted to ride up to the top of Mt John which is right next to the lake and town. The ride up was pretty good as it was a steep narrow winding road with astounding views again. At the top is an observatory with several telescopes. I'd love to come up here at night and view the stars from these babies, with virtually no light around the star gazing must be nearly unmatched anywhere else in the world.


Again the views from Mt John over the lake and the town were fantastic. Whilst we were up on the mountain we got a text from Wayne & Geoff saying they were in Lake Tekapo and where were we? Dave's text back was good, 'look up to your left on top of the mountain' 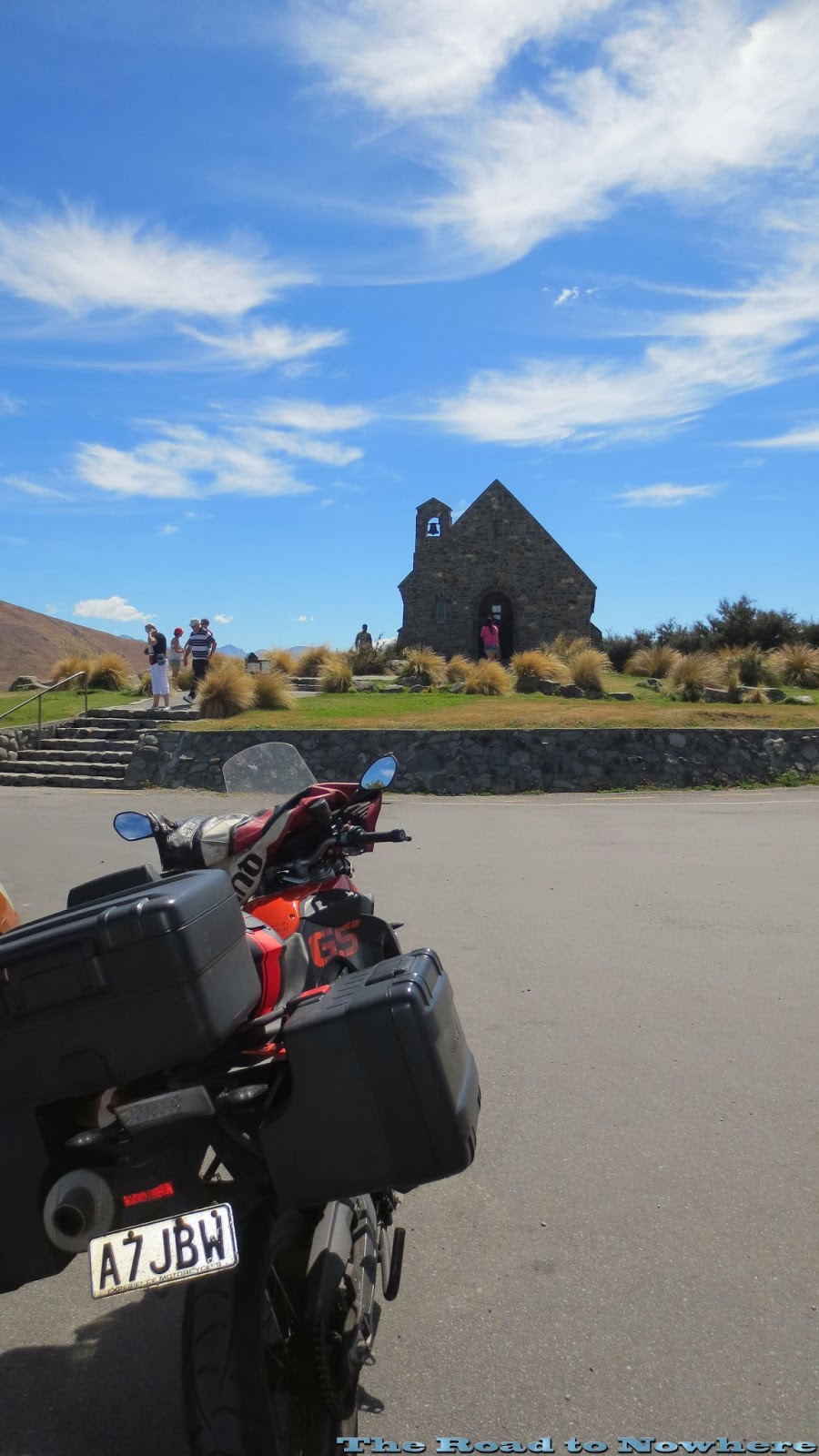 We refueled in town and replenished our fluids and also caught up to Wayne & Geoff. It was getting warm out today, I saw it get up to 29°C at one point on the road between Twizel and here. There were quite a few bikes coming and going through the servo we were at, I was wondering if they were doing the TT2000 tomorrow.

I stopped in at the Church of the good shepherd for a photo, also one of New Zealands most photographed churches I'd have to say. But it was too warm to stand around in the sun in my leathers so I continued on. We headed for Fairlie then on into Geraldine. There is a fantastic little set of twisties in between these two towns with a coffee shop at the top of the hill. I bet its popular with bikers. 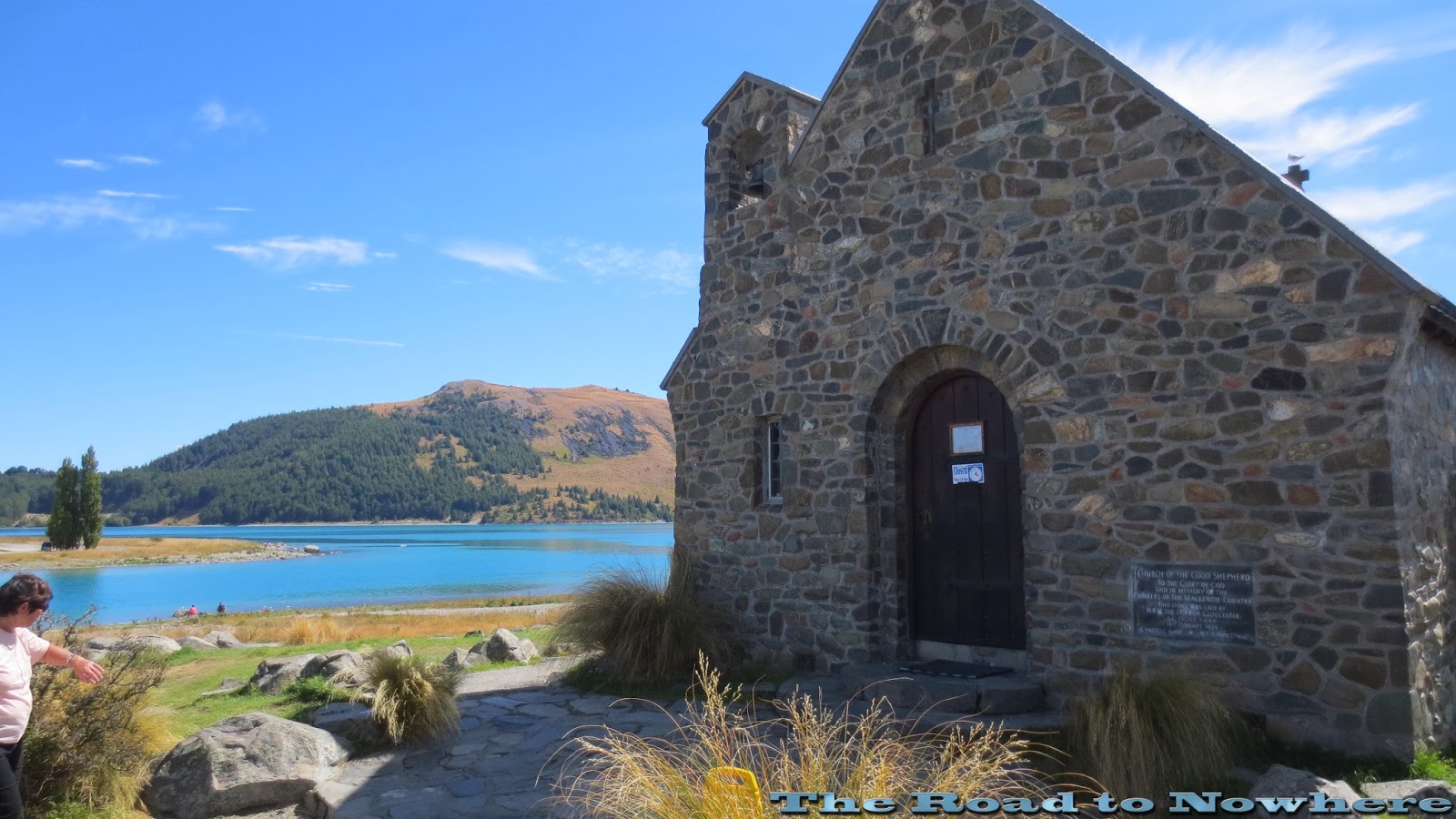 After leaving Geraldine we got out onto the Canterbury plains. This is some of the most boring riding that I can recall anywhere as the roads along here go for miles and are dead straight. There is the odd curve in the road with another huge straight. The only redeeming factor is that there are lots of big mountains out on the left hand side heading to Methven, like Mt Somers.

At Easter they have some post classic style racing through the streets. That would be great to watch as the town is blocked off and you can sit right along the roads edge, Isle of Mann style. 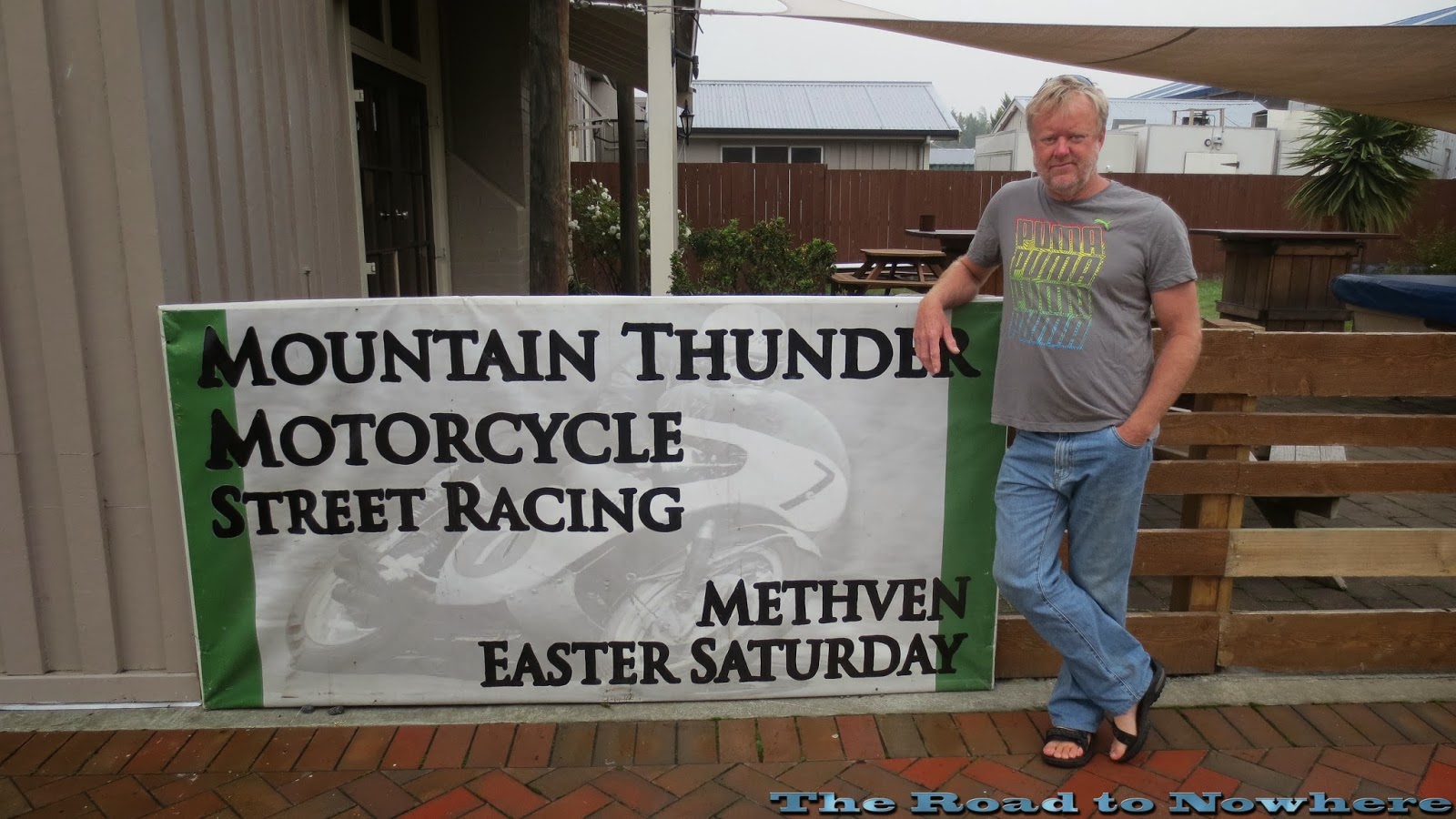 Methven is a little country town about 80kms from Christchurch. There's not a lot here and there are two pubs in town. The brown pub and the blue pub across the road. These kiwi's are original with their naming aren't they?


We got in early about 3pm and we decided to head down to have a few beers. Dave was thinking about his gopro that he lost. It was a 100km ride to castle hill rocks where he lost it so he decided he was going to go look for it. We all thought he would never find it, such a small device in such a big landscape. After 2 hours of searching he finally found it on the side of the road, with the mount smashed and it had come out of the case and was sitting in the grass exposed to the weather. Surprisingly it still worked when he turned it on. He returned 4 hours after leaving, 2 hours of riding and 2 hours of searching and another tank of fuel. Davo looked pretty exhausted by the time he got back, looked every bit of his 53 years.

Meanwhile back in Methven Geoff, Wayne and myself had some beers and congratulated each other on a successful tour of keeping the shiny side up and the rubber side down. We scoped out a nice pizza joint for diner and Dave just managed to join us for diner. We were all surprised as hell to find that he found his gopro.

We ended up leaving the brown pub and drinking the rest of the night at the blue pub and celebrated the end of the tour. Tomorrow was just the short ride back to Christchurch to hand the bikes back. I was a little sad at the fact the tour was at an end but also relieved as 10 days in the saddle of some hard riding and even harder drinking to all hours was taking its toll, I was mentally pretty drained. A day or so of no bike riding is needed I think for a recharge.