So it was easy we just had to follow this sign everywhere. It couldn't have been easier. 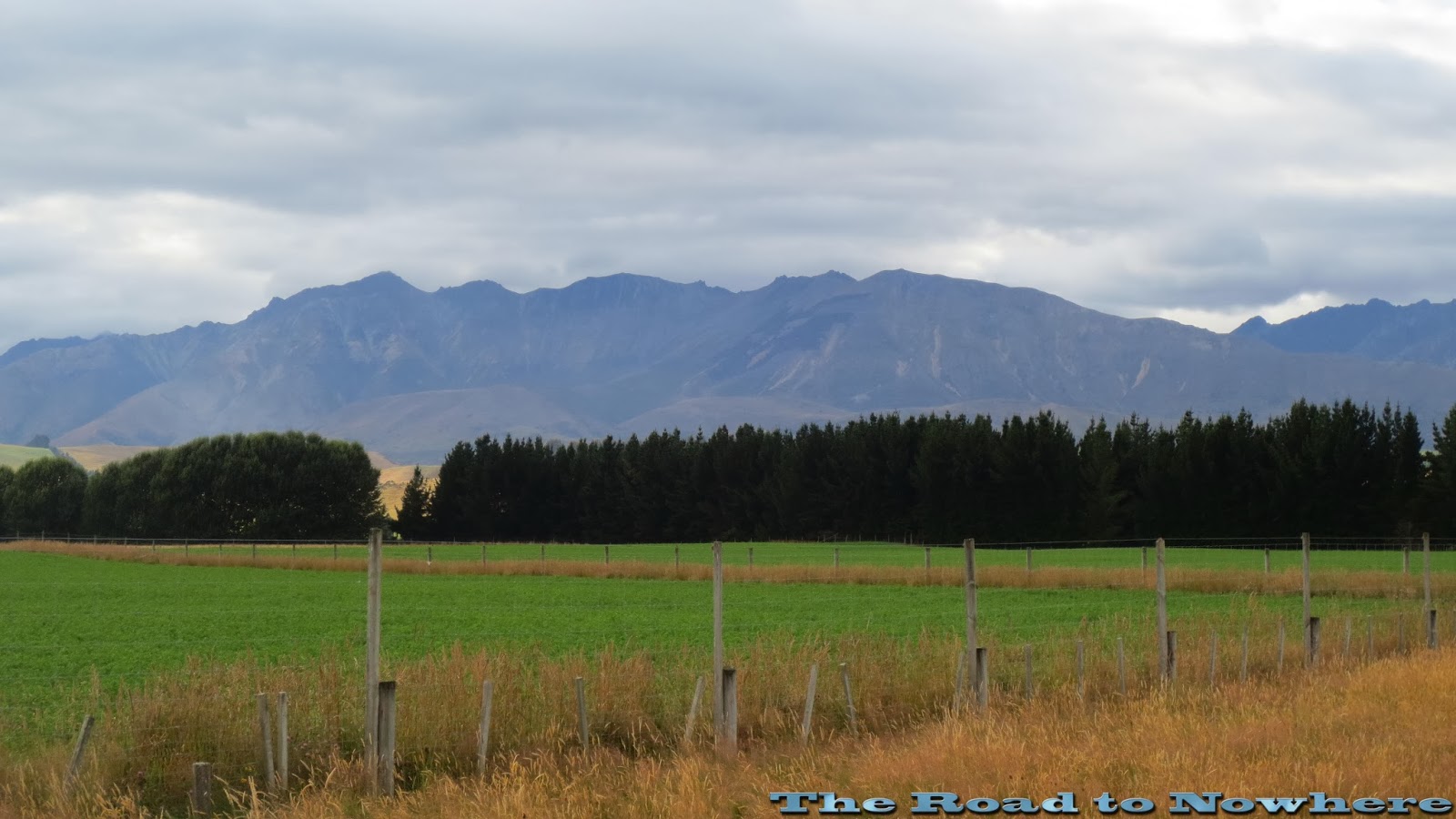 Geoff thought it was going to rain so we pulled over to put on our wet weather gear, which pretty much made it stay dry all day from that point on. Good work Roosty. 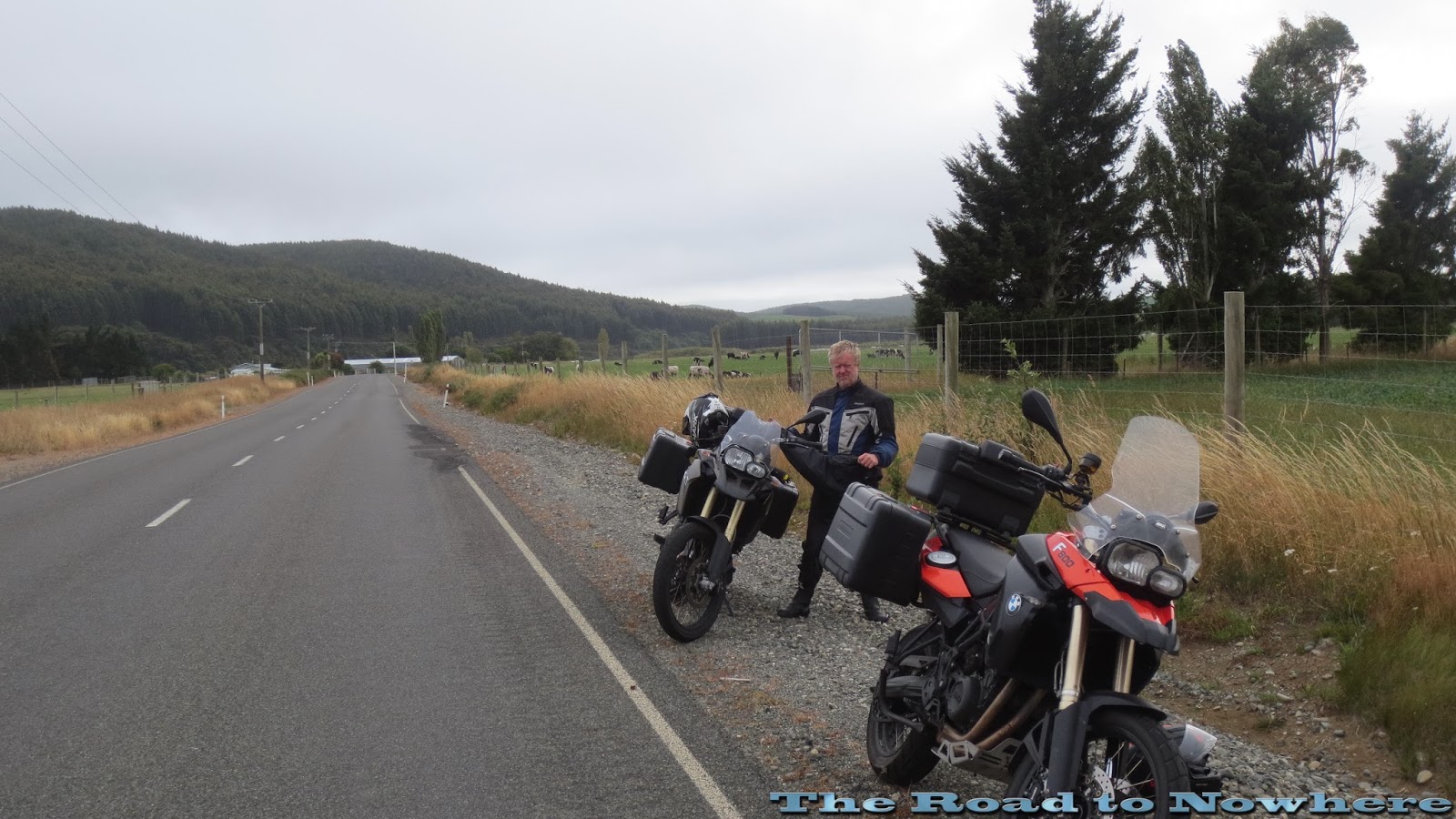 After the road had left the mountains we rode through many km's of farming land until it came out upon the coast. It was a little windy along here but not to bad and we stopped to have a look at one of the ocean views. It must get very windy along the coast here as there were quite a few trees that were growing on a sideways angle. We rolled into Riverton for another coffee and homemade pie. My pie was excellent on a cool morning. The scenery along here reminded me of the coastline along Phillip Island.

After we left Riverton we headed into Invercargill which was only a short ride. We found the E Hayes hardware shop in the main street pretty easily and put some coins in the parking meters and wandered on in to have a look. I tell you it was one of the weirdest things I think I've seen. It's like your typical hardware store with tools, chainsaws, etc with classic cars and bike displays in between the rows of goods. They have a couple of rows of motorcycles on display with a mock up of the Indian that you can actually hop inside, if you can fit that is.

Below is a photo of me with the genuine article, the actual bike that Burt Munro rode. It's funny that this ancient bike is faster than my R1. I know which one I'd feel safer on at 285kmh and I wouldn't be in danger of burning my knackers on the exhaust pipes on the R1. 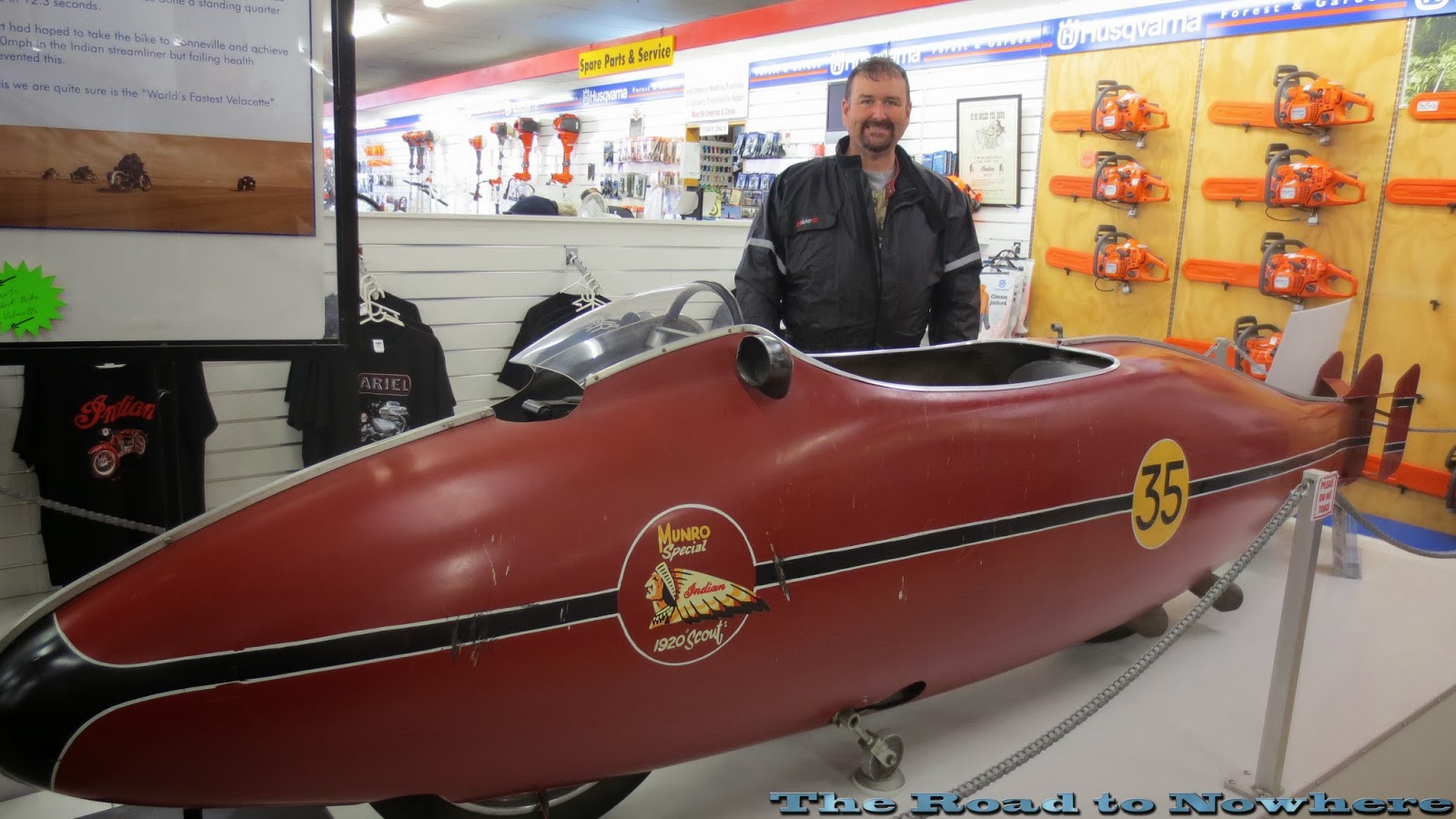 In the photo above those are the exhaust pipes on either side of the seat, anyone for roasted nuts? 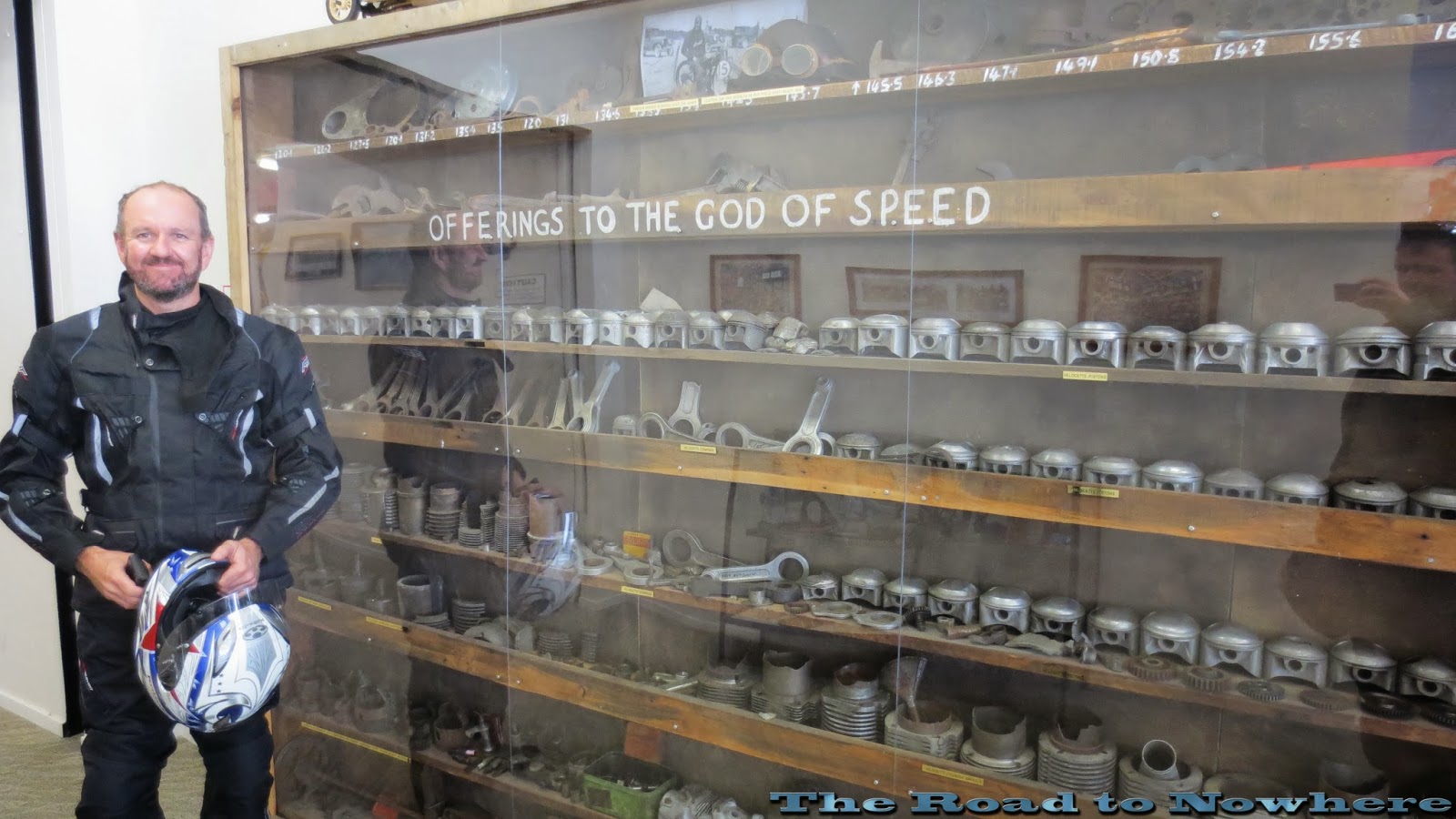 Wayne and Geoff decided to try out the mock up Indian that you could get in. They were very squashed trying to get in there so I didn't bother to have a go because I knew I wouldn't fit. The best part of all was that it was free to go and look at all of these cars, and motorcycles. How good is that? 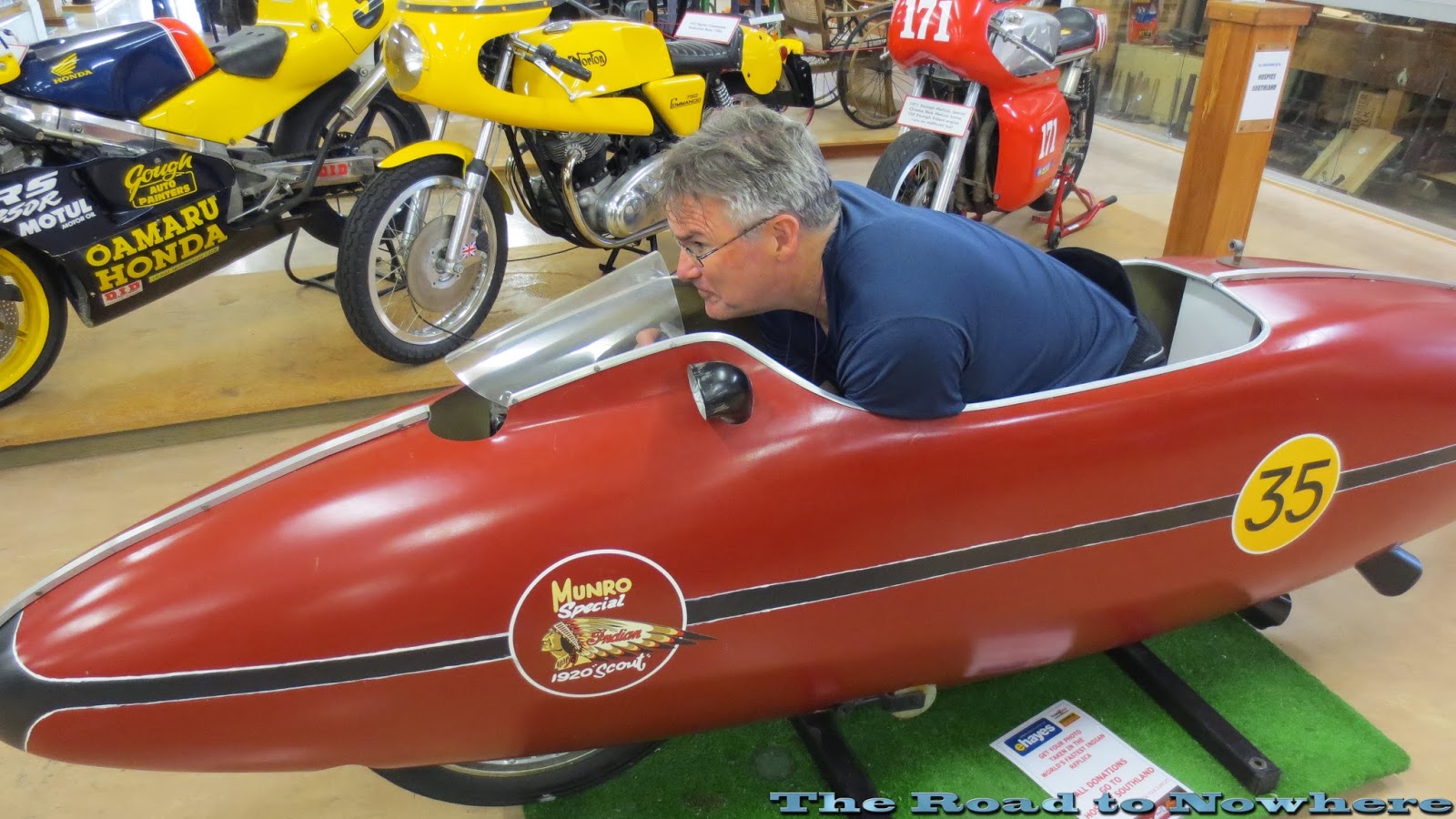 After we left the museum the others had suggested that we ride down to bluff, the southern most point on the south island. I didn't care either way and hadn't planned on it but we had plenty of time to spare so why not. There wasn't much really in Bluff itself so we rode up to the big hill that overlooks the town and looked at the views and took some more photo's.


We rode down to the famous lands end landmark sign that was at the very bottom end of bluff. Next stop after here is Antarctica. Davo and I had to get the obligatory picture by the sign just so we could say we've been here. This is the southernmost point on the mainland that you can drive to.


There wasn't much at all in bluff really and it was an unattractive industrial town, not unlike Newcastle or Wollongong although there were some beautiful beaches around the area and I noticed that all of them were empty, not a sole on them.
So it was back into to Invercargill to fuel up for the run across to Balclutha through the Catlin's. I hadn't heard much about the Catlin's except it was a good motorcycle ride so that was good enough for me to plan my route with this road. I'm so glad we did it as it turned out to be one of the best roads of the whole trip. 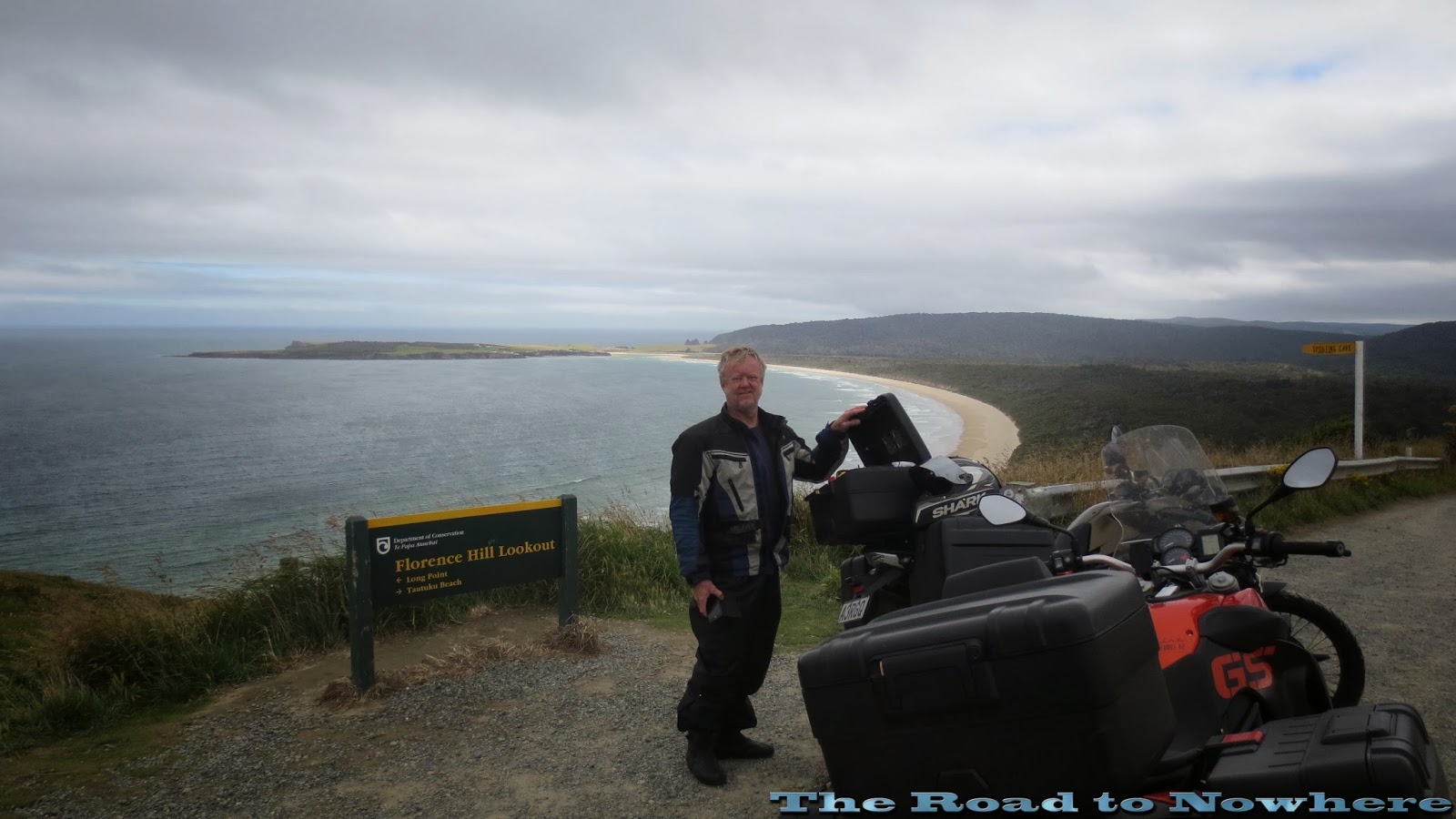 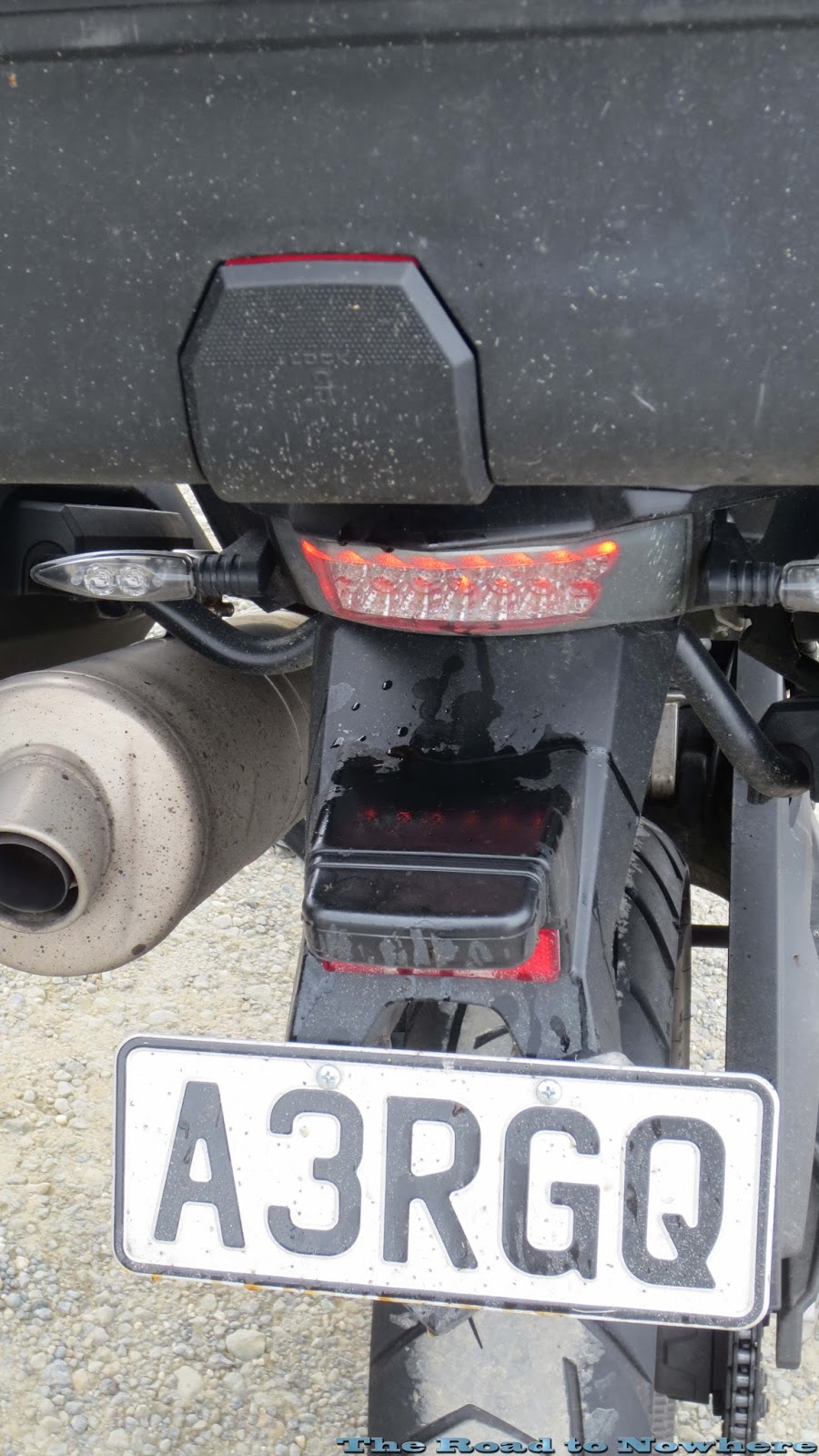 Geoff and I had pulled over into this scenic lookout over the ocean to have a look at the scenery. It was here that Geoff noticed that his back guard was all wet. Looking into his top box the bottle of coke Dave gave him to carry had exploded covering his clothes and leaking out the bottom over the bike and onto the rear tyre. Lucky we pulled over and found it fairly early on. The views from the lookout were of beautiful beaches and ocean. 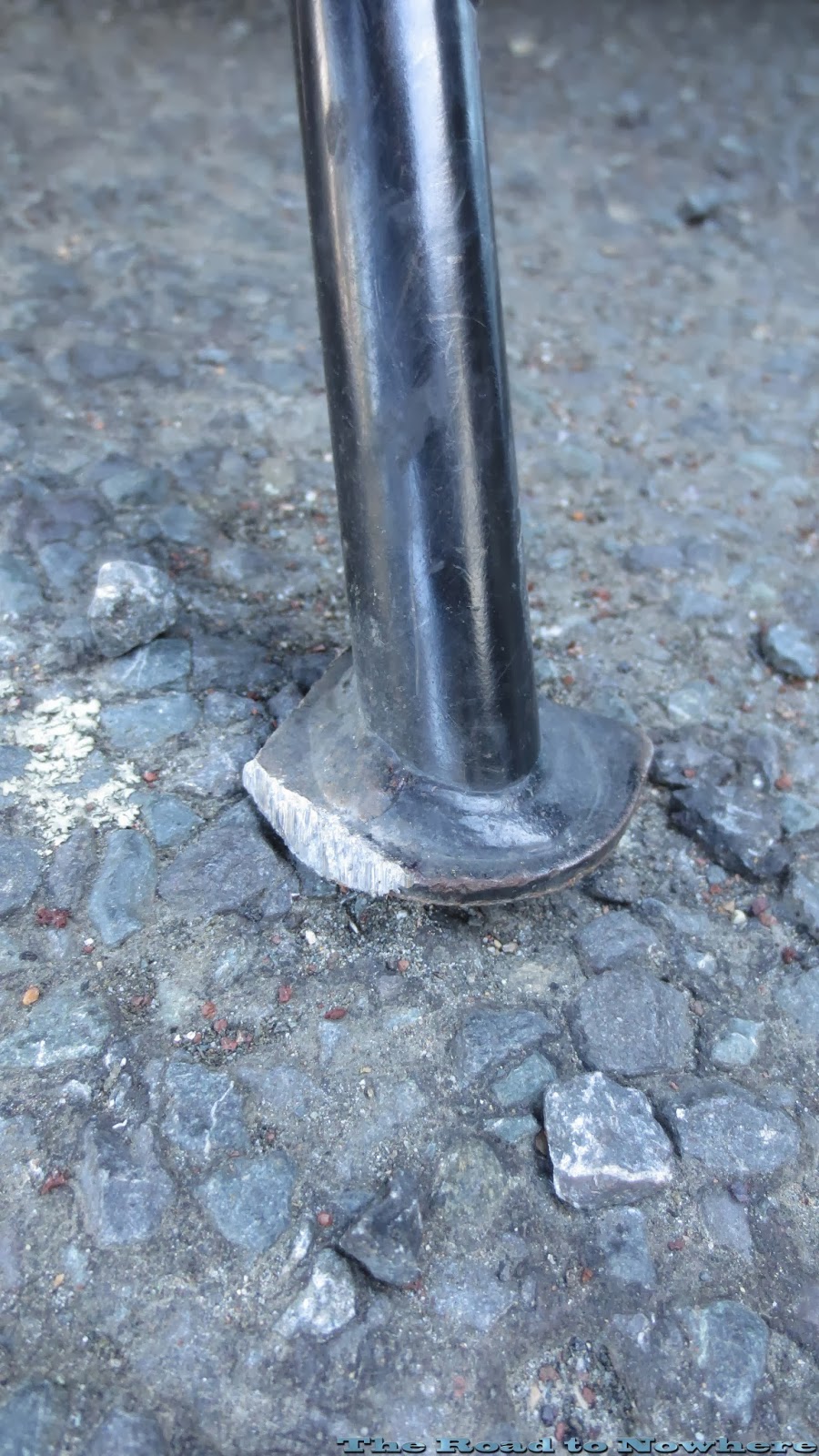 The road flows through the Catlin's Conservation Park. This is one great motorcycle road, there was very little traffic on it at all, just a few tourists and the road and it wound its way through beautiful forests, hillsides and coastline. I knew we would be in for a treat when we passed a sign that said 56km winding road. For any Aussies wondering what this road is like I'd probably compare it with the Oxley highway back home. It really is that good, probably better.

It wasn't long into this road and I was constantly scraping out the centre stand in both directions. I remember one particularly nasty corner that I threw it into a left hander grinding the stand, I started to run wide and tried to turn it in tighter, to which I heard even more louder scraping noises and thinking shit. Geoff was watching all this behind probably laughing. Looks like when we got into Balclutha that the side stand had started to scrap away. That was getting to close for comfort for me.

Balclutha is only a small country town with not much there. We were staying at the Helensborough Motor inn here which was very cheap and clean. It was on the main highway but we had a unit at the back so we didn't really hear any traffic noise. We headed into town to the local pub to have some grub and few beers. Yet another fantastic day's riding and still with the shiny side up, just.

Just when you think it can't get any better, "POW" somehow it does just that, smacking you up the face and saying hey look how good this shit is! The Catlin's is an awesome bit of road!