Checking the weather radar this morning it was all clear with no rain predicted. A great start to the day. Today we were heading to Hobart for the night over the Highland Lakes Road. I drove down it in 2010 in a hire car on a family holiday and thought to myself, I have to do this road on the bike when I come back it was that good, except it turned to dirt just after the lakes lookout.

Whilst loading up the bikes in the morning we met a couple of riders that had stayed at the pub the night before. Speaking with one of the riders he mentioned that he rode over the Highland Lakes road yesterday afternoon in the lightning storm and hail. That interested me greatly as that was our planned route this morning. Probing for road conditions he confirm my fears and there was 20km's of dirt/road works. The group quickly ditched the road from our plans, but I was determined to ride it.

So some scheming and looking at the maps I managed to convince the group to ride up to the lookout about an 80km round trip of twisties. They agreed and off we went. Hooray for me as this was a highlight of the trip.

Riding up the Highlands Lakes road we came into thick forests on either sides of the road, it was a bit tricky to see as it was still early and it was dark in the shadows. Gotta watch out for kangaroo's here, there's plenty of road kill. 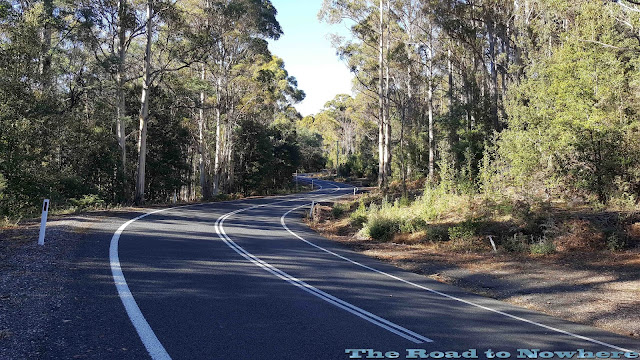 I stopped to take a couple of photo's and put my gopro on as the lads disappeared into the distance, Stu's V4 sounded brilliant as it howled up the mountain. 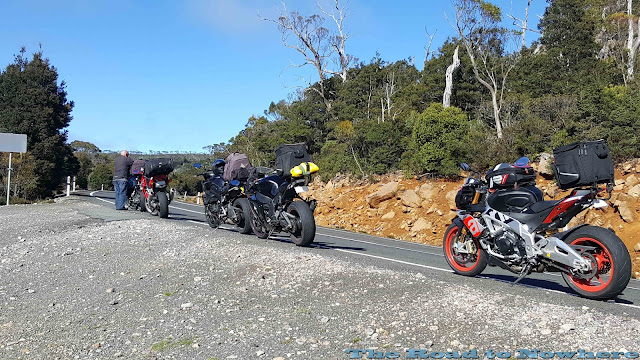 The road winds it way constantly going up through thick forested hills until it comes out at the top to sweeping curves over the tops of the hills. Large rocky mountains loom large on either side of the road, with magnificent vistas and views to the valleys surrounding. 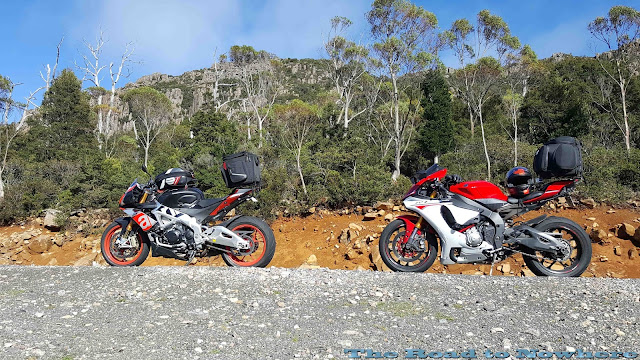 The road surface along here is in very good condition, with very little traffic on the road we practically had the road to ourselves. Stu took off like a scalded cat, looks like he was having lots of fun. The road allows for some spirited riding. 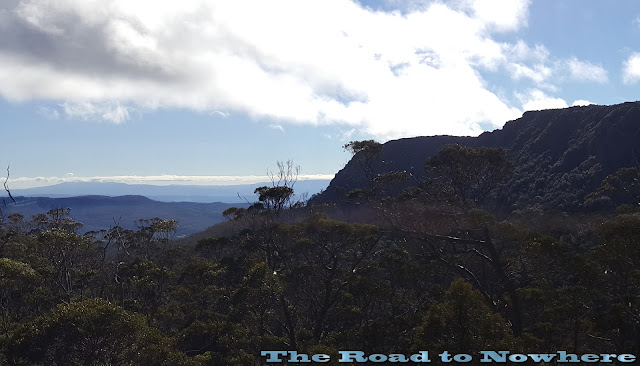 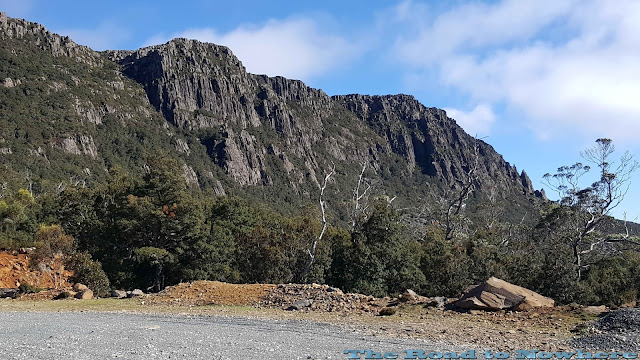 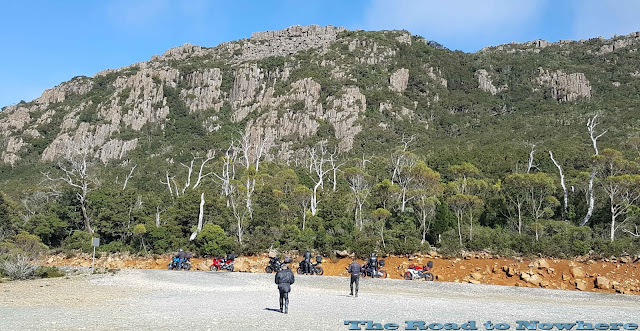 The above pic is for some scale, the bikes are over shadowed by the size and scale of the mountain behind us.

Here is a short video of the trip up the Mountain and you can see how difficult it was to see this early in the morning. Enjoy.

Continuing on we rode past Pine Lake and down the hill into more twisties to which we soon turned around not sure why, but I found out later that we were only 1 km short of the Great Lakes lookout. D'oh, we missed out on some great views and photo opportunity. Oh well. We turned around and headed back up the hill and stopped in by Pine Lake for some pics. It a beautiful spot surrounded by huge rocky mountainous terrain with the lake in the centre. 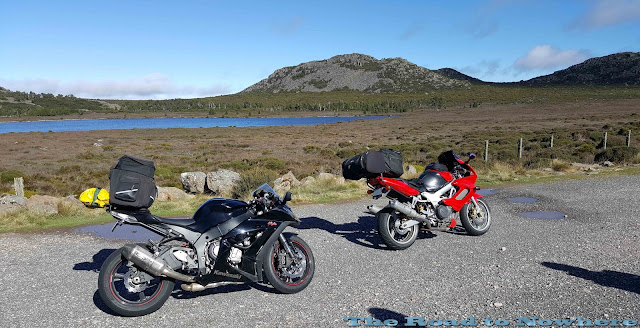 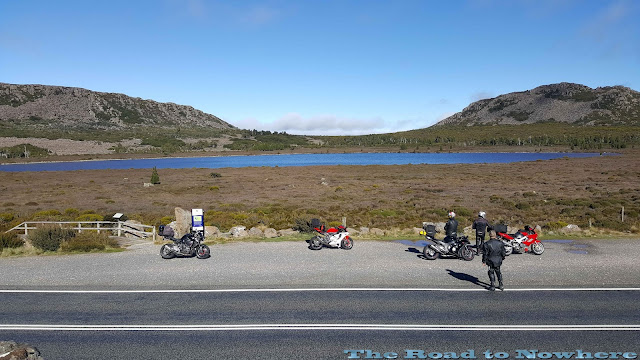 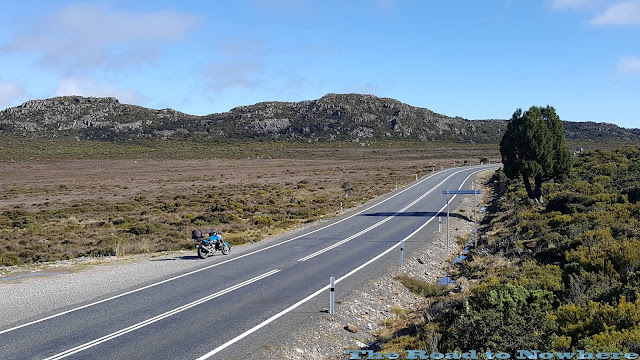 We now headed back towards Deloraine and the guys were absolutely gutted that they had to ride the 40kms of twisty mountain road again. This time I didn't stop to take any photos and now that the sun had come up enough so that there weren't so many shadows and dark spots on the road we really had a spirited ride back down.

We soon arrived back in Deloraine and turned off towards Cressy retracing our route from yesterday afternoon but at a much gentler pace as we didn't have a huge lightning storm chasing us. 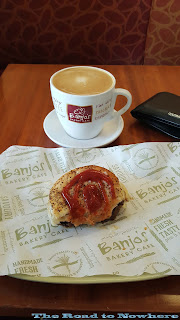 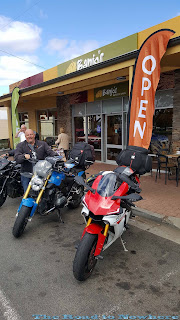 We refueled in Campbell Town, it was almost 12pm and Doug suggested we have lunch. As luck would have it there was a Banjo's bakery right across from the petrol station. They make some fantastic pie's, sausage rolls and sammiches. I downed my spinach roll so fast I didn't even get a photo of it.


Setting off after lunch we took the Lake Leake Road. This was the road that one of the local riders at the Pub in the paddock said"You must ride Lake Leake Road, its stiffy inducing". Thats a fairly big call to make and also one I was highly skeptical about.


Turns out I was right, it wasn't a bad road by any stretch but it wasn't a fantastic one either and certainly not stiffy inducing by any means. The road was fairly high speed with lots of sweeping if not bumpy corners, riding along slightly above the limit you would need to be doing highly illegal speeds to make this road fun. I don't go in for these speeding shenanigans, that's not how I roll. We had ridden on far better roads in Tassie so far, most of them at or below legal speed on twister tarmac.

We then turned north onto the Tasman highway and headed towards the coastal town of Bicheno. The traffic along the coastal road was quite heavy compared with anywhere we had been so far, it obviously a very touristy route.

We rolled into Bicheno and had a little look around, they have a motorcycle museum here but we really didn't have time to spare to poke around in there. It would have been nice to check it out. 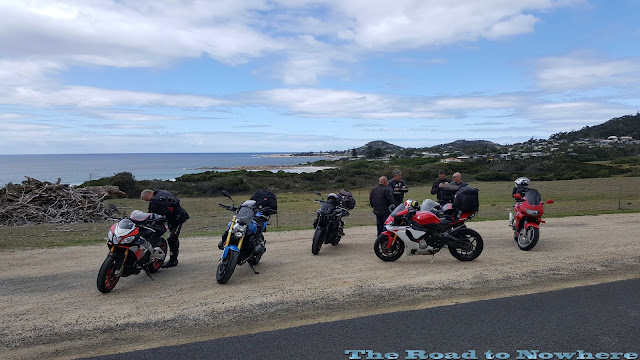 Stopping in at Bicheno boat ramp we stopped to take in the scenery, such a beautiful little coastal village very quiet. There was only 1 person on the beach and they were actually swimming the first we had seen so far. Its strange most of the beaches and lakes have been empty of people. 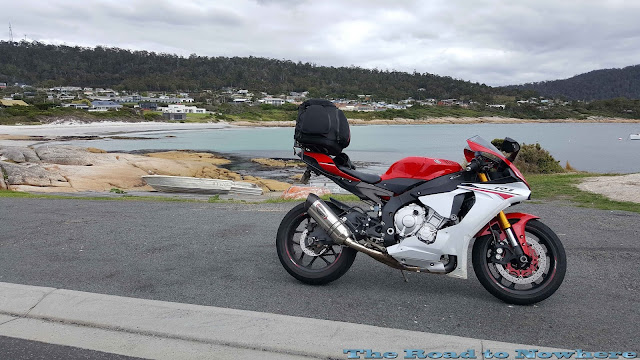 The ride out of Bicheno and down the coast is a great ride with lots of twisty bits smattered with coastal views and beaches. Just out of Swansea I stopped to take some photo's of the coast along the Freycinet Peninsula. Such a beautiful spot, even more so on a bright sunny day as it brings out the beautiful aqua blue colours in the ocean, not so today as there was now cloud cover. I also noticed how dry it was along here, they mustn't get as much rain as other parts of the island which are all very green. 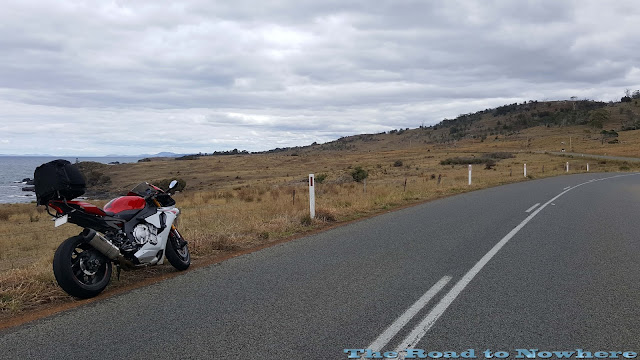 The other guys continued on and I rode along by myself enjoying the views for quite some time. Then a police car came past and was waving for me to slow down, I looked down and was only doing 109 kmh in a 100 zone. He's probably used to tourist traffic travelling well under the limit and thought I was speeding, or he saw the guys out in front and though I was going as fast as they were.

It was also along here I nearly got caught up in a head on accident between two 4x4. I was following one heading south around a left hander and he dipped his wheels off the road into the dirt, then violently pulled it back onto the road, just at the same time another 4x4 going the other direction passed him. There was literally only a few inches between them it was that close. I quick passed and caught up to the others who had stopped for some fuel.

Not far out of Orford I almost got myself tangled up in another incident. We were following 2 cars alongside a river. I pulled out to over take both cars but some traffic suddenly appeared coming the other way over a rise. Rather than punch it to warp 2 to get around I braked and pulled in behind the first car. I think they must have panicked and braked hard, I almost pulled a stoppie into the back of her.....I got the Fuck outta there as soon as I could.

Sometimes I think it would be a hell of a lot safer if I was speeding, I wouldn't have hesitated to blast by in my 20's and 30's, now I try to be a bit more conservative which actually put me at greater risk, I can't afford to lose my license. A stupid mistake on my part that won't happen again. 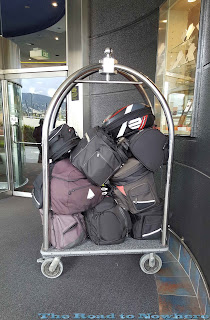 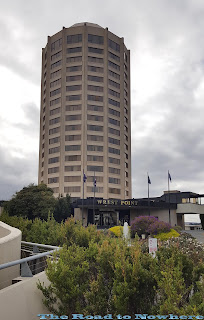 Not long after this we came into the outer suburbs of Hobart and traffic was getting quite heavy. We had entered peak hour at around 4:30pm. It was quite busy but luckily it only took us about 15min to get to our digs for the night the Wrest Point Casino.

Yeah we were upping the Ante on the accomodation stakes and staying in luxury. It must have been funny for the people inside to see 6 scruffy bikers stroll into reception with all our gear on. I bet they don't see that everyday.

We commandeered a baggage trolley and loaded it up with our gear and and wheeled it to our rooms. I notice they had valet parking, I wonder if they did bikes? Anyway no scungy valet guy would be riding my R1. 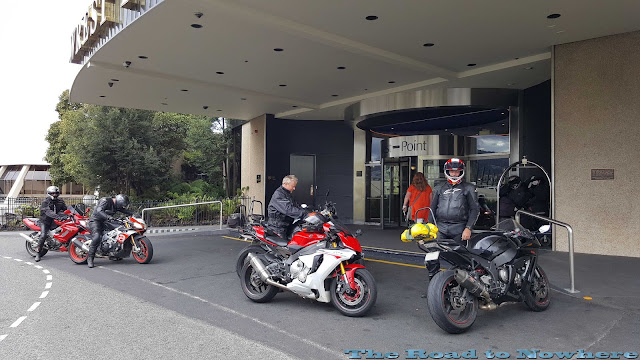 Getting changed and ready to hit the casino Geoff and I decided to celebrate with the last of the Rum and Bourbon, no need to carry it the whole way around the island so we downed it before legging it to the sports bar.

We ended up having diner at the casino and more drinks. A couple of guys had a go on blackjack, I prefered to keep my money, no need to make the trip more expensive than it needs to be. We must have tied one on as it wasn't until after 1am that we finally hit the hay. 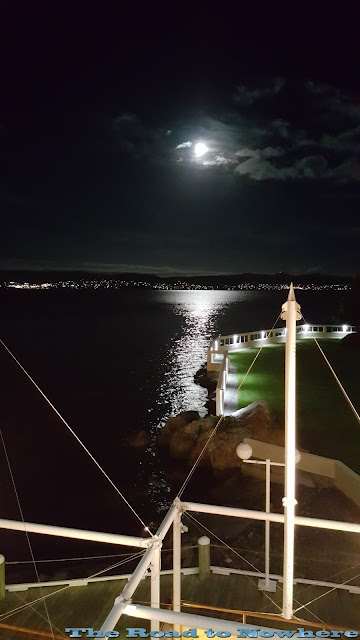