An opportunity came up recently to go drinking with the boys....... wait, let me start that again. The guys wanted to get out for a weekend drinking session......damn it. One more time, Doug suggested that we get on our drinks bikes and get out for a spot of drinking riding and camping. Dang.....🤔

So it was, I was returning to the days of my youth and was set to head to Wombat, a small dot on the map in country New South Wales near Young to attend a motorcycle rally called the Wombat rally funny enough. I hadn't been to a rally since my mid twenties so I thought I'd better get myself a small tent as the R1 isn't exactly a touring bike you can load up full of gear.

Off I went to BCF to buy a tent, something small and something cheap. I spotted a Jak & Jill Dome tent for $29. Sounds like me, if its no good I'll just leave it where I pitched it was my train of thought and after 15 minutes of procrastinating(which is good for me) I purchased said tent. I grabbed a few ocky hooks so I could strap the tent on the rack and then load up the bike ready to go. Woo...


So off I set on my drinking riding adventure where I met up with Doug and Bruce at Maccas McGraths Hill for breakfast before heading out over the Blue Mountains. The route took us across  the Bell's line of road where we switched across to Mt Victoria and on to Oberon for Fuel before making for Taralga for lunch where we were to meet up with Dave coming up from Nowra. It was a beautiful day up in the mid 20's but was starting to get a little windy. 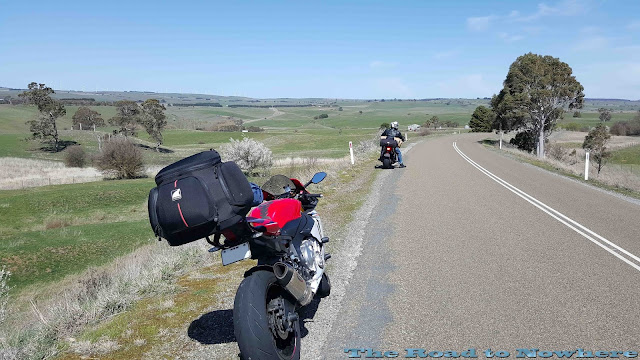 We arrived at the Taralga hotel for lunch and within 5 minutes Dave had arrived. We ordered the Taralga Burger which was fantastic if not a little messy. That hit the spot.

After a hearty lunch we headed out but not before a guy with a busted bike in the back of his ute came running over telling us to take care, his mate got blown off the road by the wind. I thanked him for the warning and we proceeded onwards.

Brucie dropped off out of sight and Doug pulled us over to wait. He said he will be low on fuel so he slows down. Not sure why he didn't fill up when we did, but anyways.....I notice coolant pissing out of Doug's bike. That's not Good. Especially here in Rugby ie Bum fuck nowhere. Its about 30kms to the nearest anywhere which was Boorowa which is also not much there. We made our way to the nearest petrol station for fuel. Brucie had 400ml left.


So in Boorowa we decided to pull the tank off to look for the leak, we couldn't see it but looked to be coming from around the top of the radiator. The overflow bottle was empty but we filled it up and continued onto the rally as the temp had now dropped to the low teens which would help out. 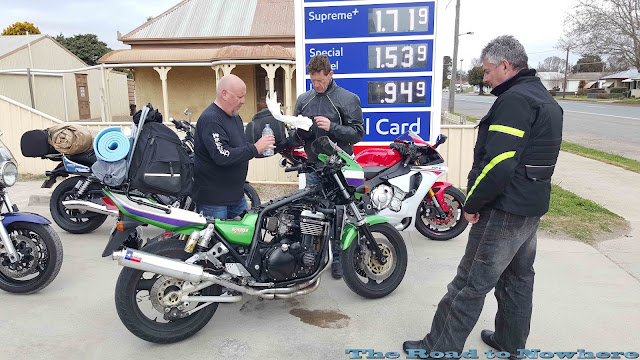 It's always interesting setting up a brand new tent you've never used before whilst people stand around watching. Lucky this cheap little tent was a breeze to set up, 10 minutes and I was done, time for beers......... 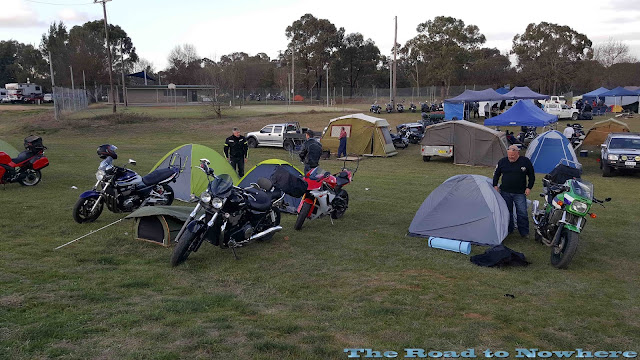 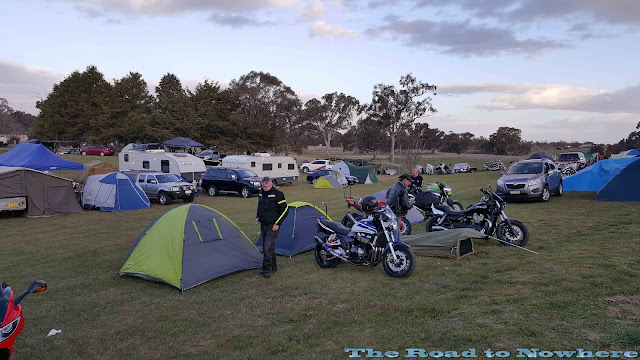 The other were still setting up their tents so I headed to the bar to get us some beers. Once all the tents were up we headed over to the bonfire which they had just lit to see what was on show, we missed the gymkhana but there was some bands playing, the guy on stage was playing classical gas, I was really digging that.

A local Distiller from Young had some of his local moonshine out for trial. Doug said come and try some of this free alcohol. I was there faster than the millenium falcon did the kessel run in under 12 parsecs....

So we had purchased a bottle of Whiskey Liquor, which we were downing one shot every time we had a new shout of beer. This is going to get messy.....

Messy it got till the point I had to go to bed before I couldn't stand up any more and that was the end of the night for me. The boys hadn't had enough drinking and continued onwards and err upwards.....

I do remember they had a fantastic fireworks show before I went back to my tent.

Next morning was not so good. I didn't feel like riding anywhere, the other guys looked the worst I've seen them, which I had a little chuckle. Bacon and egg roll dispatched and time to pack up and ride outta here, except with the -2°C temps my bike wouldn't start. Out of 500 Harleys and 5 Jap bikes, the non starting bike count went like this; Jap bikes = 2, Haleys = 0. Yep that was a little soul crushing. All the harleys rode out as I was looking for a jump start, damn R1's with there 2 double AA batteries. And a Hayabusa rider was also getting a jump. The tent worked well so I packed it up and took it with me. All in a good weekend away with the boys drinking.....good times.

After returning from Tasmania earlier this year my chain and sprockets had well and truly surpassed their used by date and were badly in need of replacement. So what did I do? I did what all great procrastinators do, nothing!!!!

I went on a few more rides just to stretch the heck out of it some more, before finally biting the bullet and booking it in for replacement. Why all the procrastination you ask? Well it's probably an inherent trait in my DNA or quite possibly I'm just a complete lazy bastard, who really knows.

One of the reasons for taking so long was that I wanted to change the standard gearing. Anyone who has ridden a 2015 R1 knows how tall first gear is. I wanted to change the gearing a little bit by going down 1 tooth on the front and going up by either 2 or 3 teeth on the rear. I spent a bit of time looking at what people had done on forums. Another great resource for this is a website called Gearing Commander. You can put in your bike and it will show your stock gearing and you can then make informed decisions on what effects changing the sprockets will make.

The standard R1 gearing is 16F/41R. Looking at the standard gearing chart you can see the R1 will do 156kmh in first gear and is geared for a whooping 325kmh in top(I've seen 295kmh and it still had more to go).

I finally settled on a 15F/44R which is -1/+3 over the standard gearing. What effect does this have you might ask? Top speed has been reduced down to a miserly 284kmh(who cares I rarely do that anyway on our highly policed roads) but what it has done it put a huge amount of usable power lower down where its more usefull.

It will now roll off the line letting out the clutch where before it would stall unless you gave it some useful rev's. There is plenty of usable power in every gear including top, just roll on the power and it takes off, 6th gear now feels like 5th gear was on standard gearing. The throttle doesn't feel quite as snatchy in lower gears either. Oh an it wheelies like a bastard now, lucky I can put the lift control on if I need to.

First ride impressions were pretty good. The front will come up with ease in first gear without even trying, so I'll need to be a bit careful with that but it's pretty punchy now everywhere. One downside will be now it runs at about 500 rpm more in top gear so it will probably use slightly more fuel, I'm hoping the offset of that is when it comes to the twisties I was always in first gear, now perhaps I will be able to be in 2nd or 3rd and use less fuel in those sections which uses more fuel than straight highway miles. Time will tell as I've only been out for one overnight ride so far.

Best of Nino Pallavinci 2016 - Craziest Motorbiker at the Nürburgring No...