During a conversation with Geoff the other day he'd asked for a copy of one of the photos I took at Phillip Island last year. This gave me an idea of my own.

The laminated wood covering on my desk where my PC sit's has come off some time ago exposing the chipboard timber beneath and has slowly been falling apart with wood chips slivers going everywhere. I was wondering what to do about it when I got the idea of getting one of my pictures printed out and laminated to put over the top of it. As yet I haven't printed any of the photos I've taken. So off I went to Officeworks and got an A1 print laminated. I am pretty happy with the results. My play space is much more inspiring now. 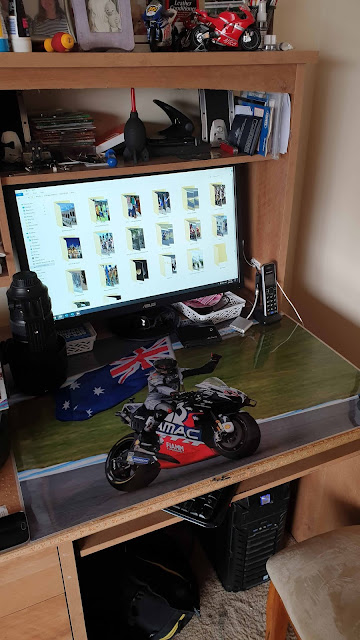 Our current bushfire crisis is far from over with it flaring up bigger than ever on the NSW South Coast and Eastern Victoria on New Year's eve and it's still raging. The fire fronts are so big that our fires services are so stretched that some fires are unattended, they just simply can't be everywhere.  These fires are bigger in size than the Australian Capital Territory(ACT) with over 4.5m hectares burnt out in NSW alone. Here is a map of the current fires in NSW. There are predictions the worst is yet to come this saturday with temperatures in the mid 40's. 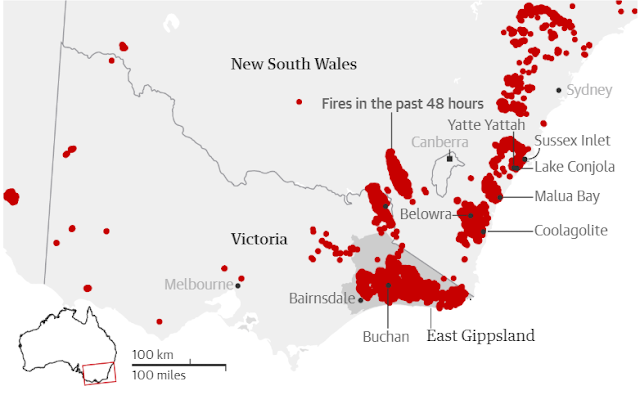 The eastern Victorian town of Mallacoota had 4000 residents and holidayers evacuated to the beachfront as the bushfire swept through the town destroying hundreds of houses. Daytime was turned to night as residents stood on the beach in blackness at 9.20am. Truly horrifying and frightening stuff. These fires are now so big that the smoke is reaching across the Tasman sea and engulfing New Zealand's South Island as seen here on the BOM sat view. http://satview.bom.gov.au/

It was similar scenes in the NSW town of Batemans Bay with residents and holidayers evacuated to the beaches. There are photos on the Internet of the main street at midday looking like night time. Very scary. Our hearts go out to them and everyone that has been lost in the fires. So far sadly 9 people have lost their lives in the new years fire, but it could have been so much worse. Photo below is of the fire at 11am on new years eve with batemans bay in the centre of pic. 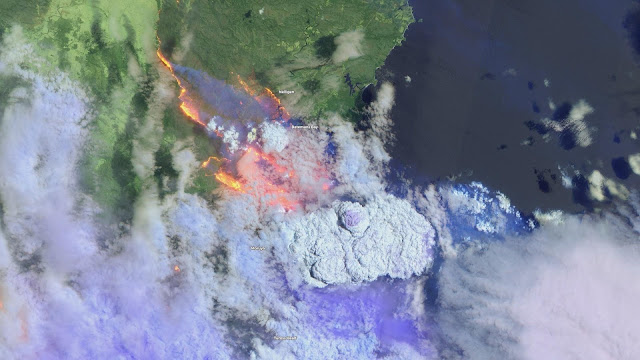 Cobargo is small town in southern NSW which was also devastated by the fires with the main street being hit. We regularly travel through this pretty little town on our annual snowys ride. 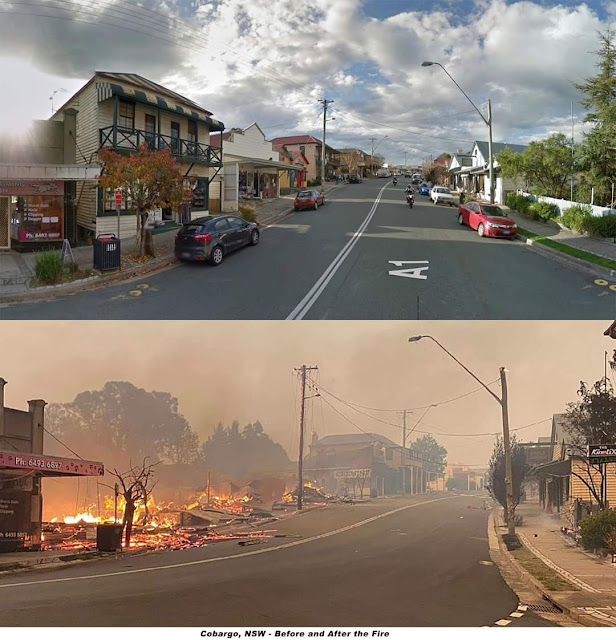 Speaking with Geoff on new years eve we  decided we would take a new years day ride out across the Bells Line of road in the Blue Mountains and have a look around. This was where the bushfire's ripped through here about one week ago. What we found was more devastation.

The first sign of any fires was in Bilpin about 30km from Windsor were the Tutti Frutti shop has been burnt down. For the next 52km into Lithgow the entire Blue mountains has been burnt out. There are small patches here and there not burnt. 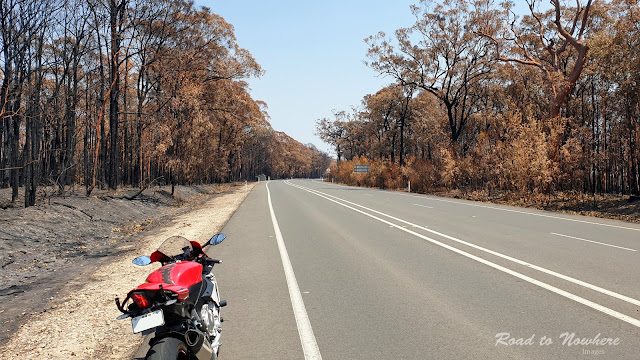 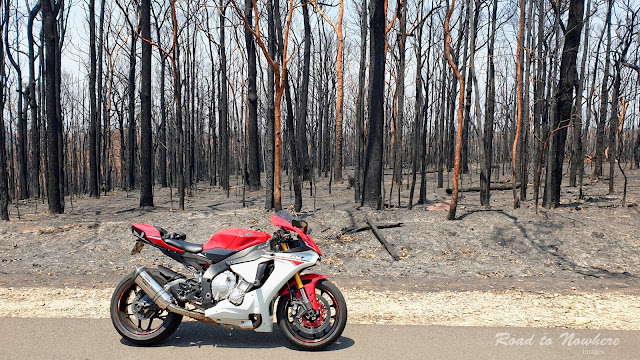 Geoff spotted smoke and thought he'd better put it out before any more fires break out. 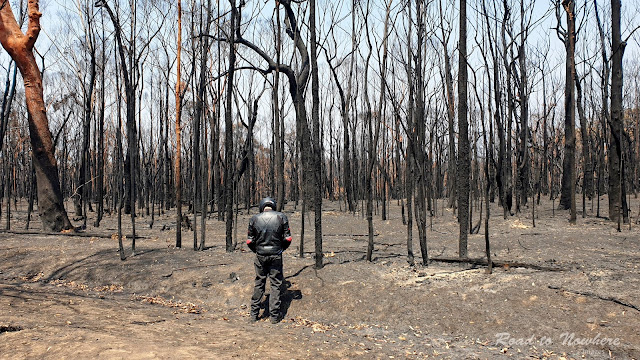 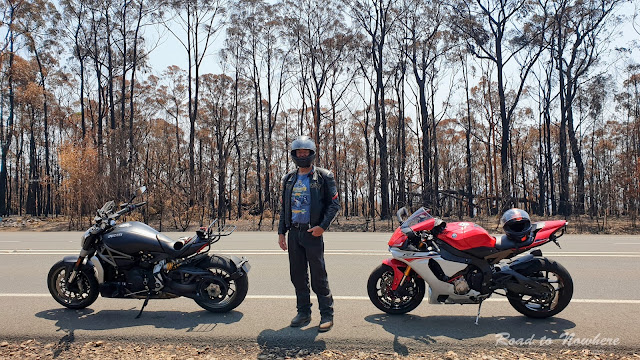 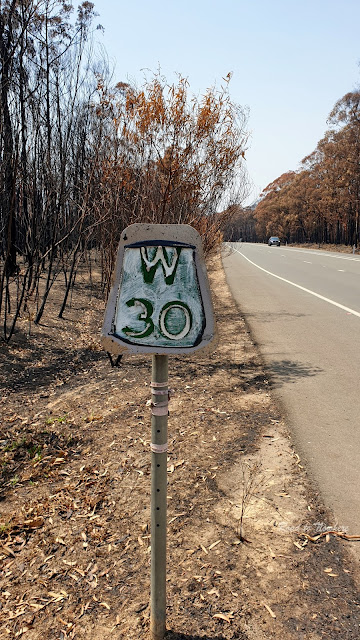 The W30 sign is for Windsor one of Sydney's outer suburbs so the fires are within 30kms of Australia's largest city, that's how close they have come. We actually had a watch and act fire alert sms come through on our mobile phones on new years eve for an out of control grass fire only 10 minutes from our house. That's getting a bit close.

We stopped in across from Bilpin Fruit bowl for a coffee and homemade apple pie. The apple pie was delicious and I was desperately needing a coffee pick me up. A RFS brigade stopped in for some lunch at the table next to us. Members of the public were stopping to talk with them and thank them for their efforts. This was great to see. Well done lads and ladies. 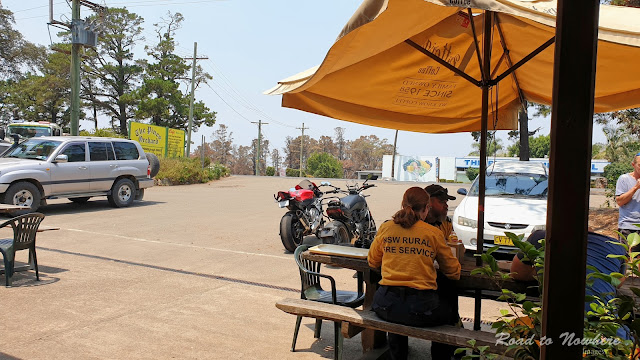 Coming up Mt Tomah you could see through the tree lines on the side of the road that normally blocks your view. But now with the fire defoliating the roadside there are clear views out over the surrounding hills. They have been fire devastated as far as the eye can see. 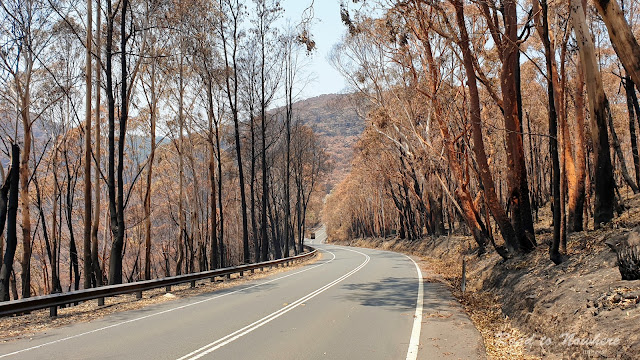 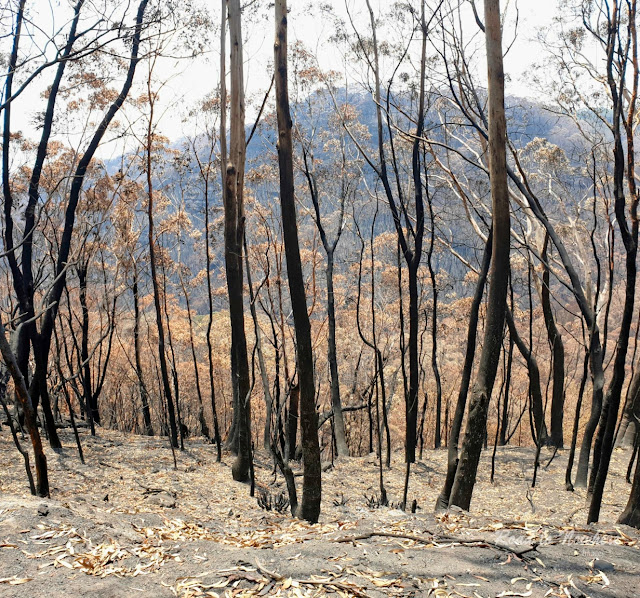 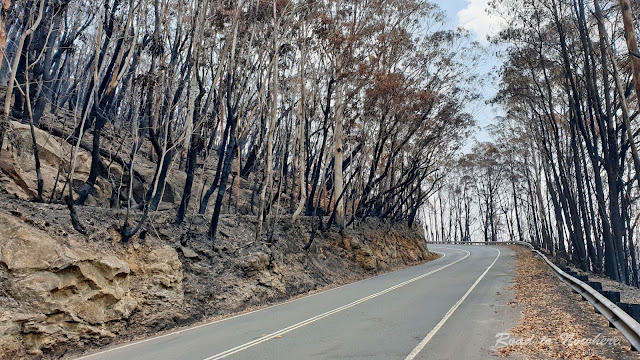 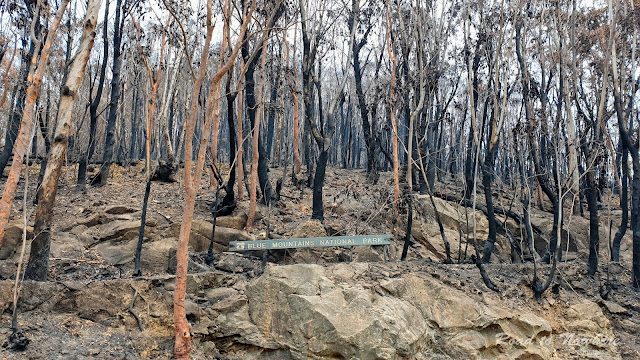 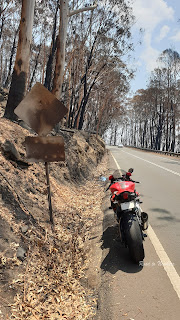 It's a sad sight indeed to see so much destruction of a once beautiful area. Our only hope is that we get some rain soon so that it will help with the trees to grow back and help put out some of these fires. Sadly there's no rain forecast anytime soon.

Mt Tomah area is the worst hit. Coming up the hill to Mt Bell 998m the signs have been completely melted off and lay on the road as pieces of molten aluminum. I believe that aluminum melts at over 660°C that's how hot these fires are getting up to. Even the steel railing was buckled from the heat.

Riding on a couple more kilometres I saw a rock vantage point on the left side that looked out over the surrounding hills looking towards Mt Banks. I climbed to the top which is never easy in Motorcycle boots. The view here would normally be beautiful but not today. But it does show the size and scale of the destruction. 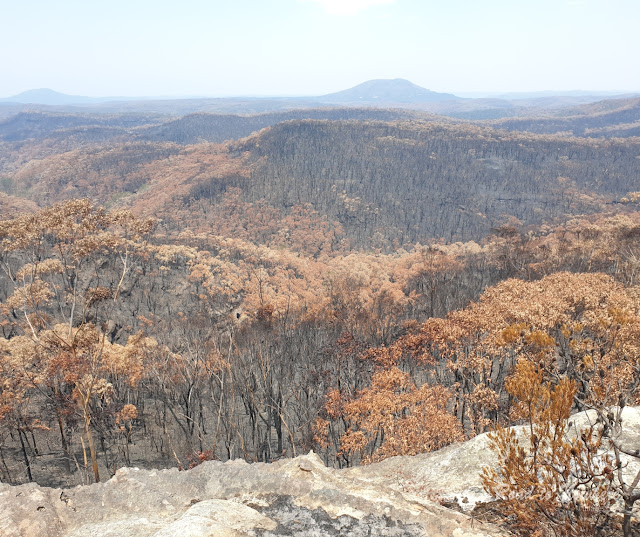 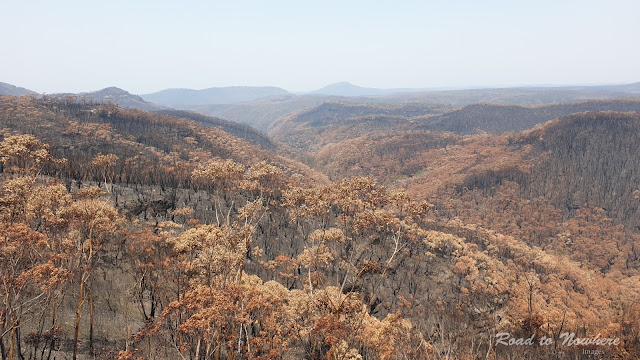 From here we rode into Lithgow, the fires had burn out tree's all the way into Lithgow coming down the twisty hill at the end of the range. Looking across the other side of Lithgow the hills were covered in burnt tree's.

We decided to head back via the Great Western Highway and it was getting quite hot up here today, up to 36°C. It's not normally that hot up here but perhaps that due to not tree cover and everything is now black absorbing heat? On our way back through Katoomba the temp dropped by 6°C in less than a kilometre. That was like someone switched on the air conditioning. Just a short ride today but great to get out for a ride on the first day of the year.