The Friday pre ride weather reports were in, the weekend was going to be warm and sunny which is just perfect for late Autumn. That was gladly welcomed as the last Mudgee muster it was below 10°C in the mountains and was bitterly cold. Our meeting point was at Richmond for the Sydney crew, but later we would be meeting the Nowra crew out at Oberon.

Heading up the Bells line early around 9:00am there was an unexpected amount of traffic and the rozzers were out handing out performance awards this early in the morning but temps were up around 16-17°C just perfect really.

First pee break around Bell in the Blue mountains and a quick photo op before we crossed over to Mt Victoria and down the pass and onto the Jenolan caves road.

We then turned onto Duckmaloi road towards Oberon and it was a nice smooth run through the hills, where we stopped for a mid morning snack at the wild bean cafe. A toasted ham/cheese/tomato sammich washed down with a nice warm coffee hit the spot.

It was in Oberon we also picked up Dave's crew from Nowra and Geoff and Scotty who had driven up. 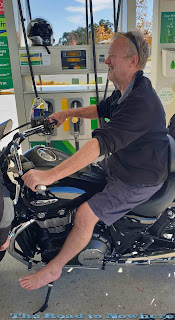 Why was Geoff driving you may ask. Well he is is still recovering from his off road crash back on new years eve and still cant bend his leg to get back on his bike. Yes it was a pretty nasty one. At our fuel stop in Bathurst Geoff tried out Bruce's Triumph.

It took a bit of effort getting on and off but you couldn't wipe the smile off his face being on a bike again. Maybe you'll have to sell the MT to me and you can get yourself a Harley mate.

It was decided here to do a lap of Mt Panorama. Why not we only have about a 2.5 hr ride to our destination. We stopped at the top to take in the views.

One lap of the mount was enough before heading out the Turondale road to Hillend. This is a great little ride as it is not very highly trafficked, its a bit narrow and its hilly and twisty. The ride into hillend is also a great bike road and following Craig on his Vstrom into the blinding sun he was setting a cracking pace.

The hillend pub had a fair few people for a Saturday afternoon and we had one quick beer whilst chatting out the front. The tree lined entry into tower was aglow with autumn colours.

Hillend was a historic gold mining town back in the late 1800's and had a population then of over 8000 with 28 pubs but since then its become a bit of a ghost town with a current population of 80 with one pub.

From here we followed the Hillend Road all the way to Mudgee. This is another good fun motorcycle road, again similar to the turondale road being narrow and winding. After about an hour we arrived at our accommodation for the night, the Oriental Hotel. We had booked out all the rooms upstairs and the house next door. At diner our table was reserved and it looks like they heard a famous motorcycle racer was in town. The food here was great and the accommodation was good and reasonably priced at $50 per head.

We finished up just before midnight but some of the other boys decided to go out for a few more. We were waken at 2.40am by 2 of the boys returning trying to get in when they were staying in the pub. Slomax was not impressed. They will have sore heads when they wake up.

Sunday morning greeted us with rain. WTF, the forecast was for clear weather and so I didn't pack any wet weather gear. Bruce asked how long I'd been riding. 25 years and I haven't learnt a thing haha. But it was light rain and it didn't last long as a cold front had come through.

We made our way down to the Mudgee Brewery for breakfast. Poached eggs on toast with bacon hit the spot nicely whilst we waited for the rain to move on. Topped off by a wake the hell up coffee.

When we finished and came out there was a shroud of mist streaming from my ventura bag as the sun heated it.

The 2 drunken louts from last night failed to appear for breakfast and we ended up leaving them as they were making their way back to Newcastle as the rest had to get to Sydney/Nowra and would run out of daylight waiting around.


So we headed off towards Rylestone on wet roads but thankfully there was no more rain today. By the time we got onto the Bylong Valley way the rain had all dried up making for a more enjoyable ride.
We stopped in Bylong for Stu and Graham to catch up. There were quite a few bikes out today. Some of the surface along the Bylong road was in very poor shape, but there were also some new sections that were pretty good.

Our next stop was in Denman for fuel before we stopped in at Broke for a spot of lunch. It was here we parted ways with Dougie & Craig heading down to Wollombi whilst the rest of us made our way via the Putty Road. Stu said that we should take it easy on the Putty today. Here's how it went. 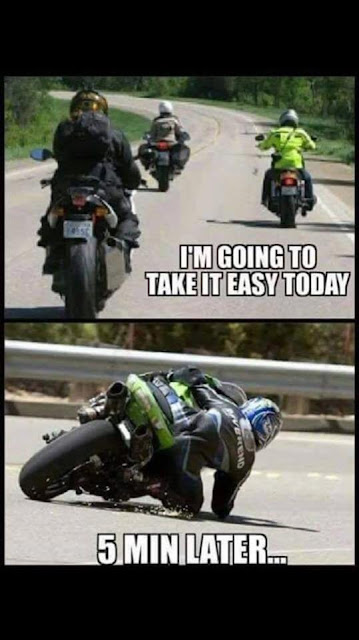 We stopped at the Grey Gums Cafe but only so that we can all regroup and make sure everyone made it through the 10 mile twisties ok before we continued on. It was a good day on the putty today, nice and warm and no rozzers.

As I sit here and type this on Monday morning(the man flu caught up with me) the cold front that has swept through eastern NSW over night has brought snow to the Blue Mountains, Bathurst and Oberon with temperatures into the negatives with wind chill. Looks like we lucked out with the weather to our good fortune as none of us would have been prepared for negative temps. Another great weekend ride away, thanks Stu for organizing everything.

Cheers Lads
Looking forward to the next one