Today was going to be a bit more of a relaxed affair as Doug hadn't really made a route plan for today, and after 2 big days in the saddle I think most people were looking for a bit more of a relaxed ride. Flyboy put together a route at the drop of a hat that would take in some twisty tarmac that would only be about 300kms or so. Sounds great to me.
So after a bit of a late start and long breakfast we were fuelled up and ready to roll out. I swapped onto Dave's Africa twin to ride up Summerland way and he rode my R1.
That was quite a shock to the system swapping from the  R1 to the Africa Twin. Geez its a big heavy bastard just getting it off the side stand. I could just touch the ground, it has a very tall seat. 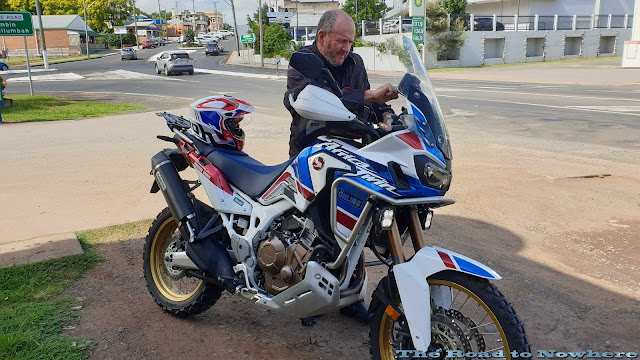 Riding the AT along it had plenty of go in it, it was a bit heavy going in the twisties up to Mt Lyndsay requiring a lot of effort to get it turned but nothing I couldn't manage. I waved the faster guys by so not to hold them up whilst I got used to the AT, don't wanna throw Flyboys new bike down the road and hurt myself either and plus the fact he has knobbies on it.
The NSW side of the border the road is a well kept smooth twisting piece of tarmac that is satisfying to open the throttle on, however the contrast when you cross the border into Queensland where the road is rough, narrow and bumpy and is not as much fun. Still the views are spectacular at the Mt Lindsay lookout where we stopped  so everyone could catch up. 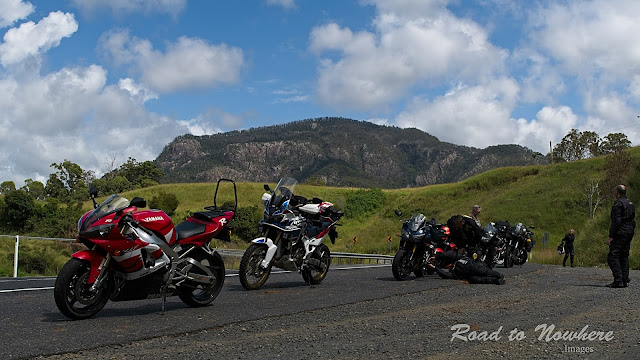 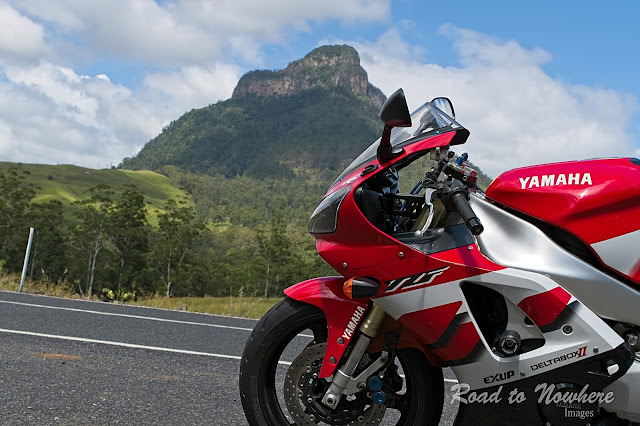 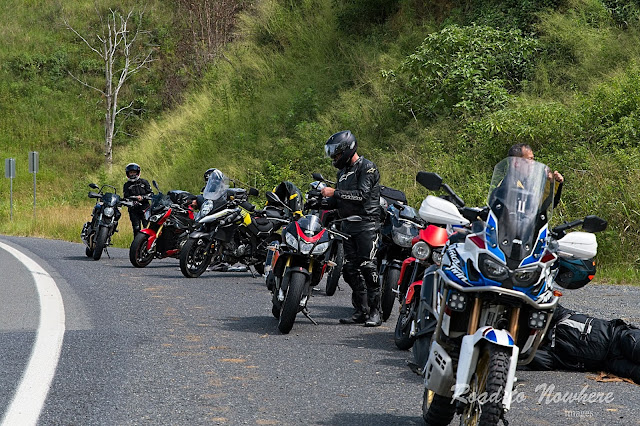 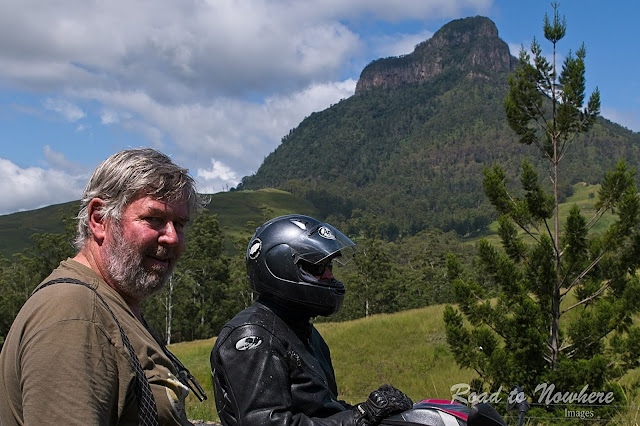 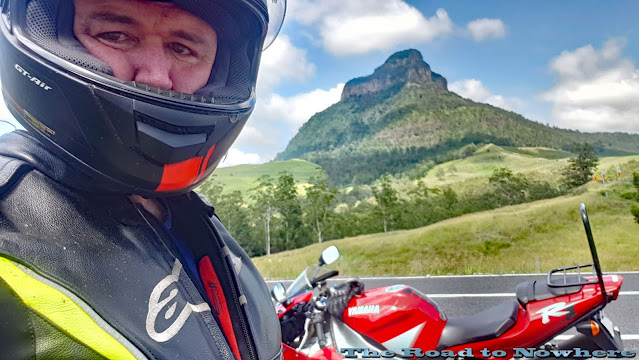 Doug noticed his bike wasn't handling too well and checked his tyre pressure. It was down to 18psi on the front. Rick decided to let off a few canisters of CO2 for fun, no tyre filling happened just some more environmental destruction. We were going to get fuel in Beaudesert so he said he will fill it up when we get there.
An attempt was made in Rathdowney with Brett's air compressor but it had a blown fuse, so got packed away again. Sadly, Bushpig had a compressor under his seat but didn't bother to offer it up until we got to the pub later on.
I also swapped to Geoff's Africa Twin whilst he rode Flyboys. The difference in the two Africa Twins was like chalk and cheese. Geoff's I could flat foot it and it was much easier to ride, maybe due to the different tyres. He has road oriented tyres where Dave's has the knobbies.
From this point Flyboy took us down to Canungra and down the Beechmont road. Riding past the gates of Canungra Military base I could hear Redgum's 'I was only 19' song in my head. It was quite busy today being Sunday and just on the outskirts of the Gold Coast.
We got pulled over by the rozzers for a random breath test. 10-15 police for a random breath test, I think not. They were letting every car go but only pulling in bikes. I thought this might turn into a exhaust/tail tidy reflector stop but they let us go without harassing us any further. Maybe they noticed our ages(mostly 50-60) and took pity on us. 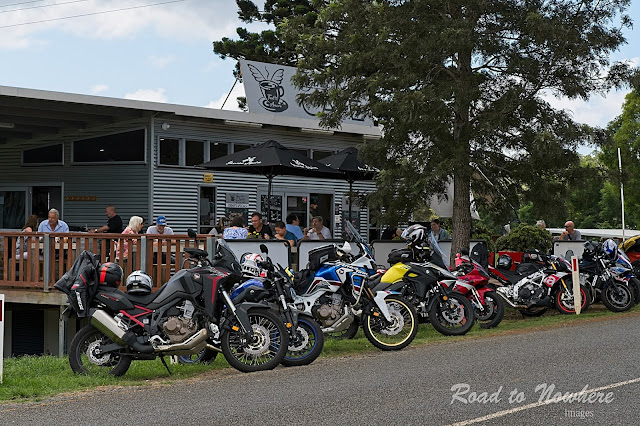 We stopped in at the Flying Been Cafe for lunch. I tried the brisket sandwich and it was fantastic. We relaxed and chatted whilst looking at the views over the valley. A couple of hang gliders took off whilst we were there. One came oh so close to clipping some tree tops.

The cafe is at the top of the ridge line on the Numinbah Valley. The above view is right across from the cafe down towards mount Warning. We will be riding down through that valley back towards our accommodation for tonight. 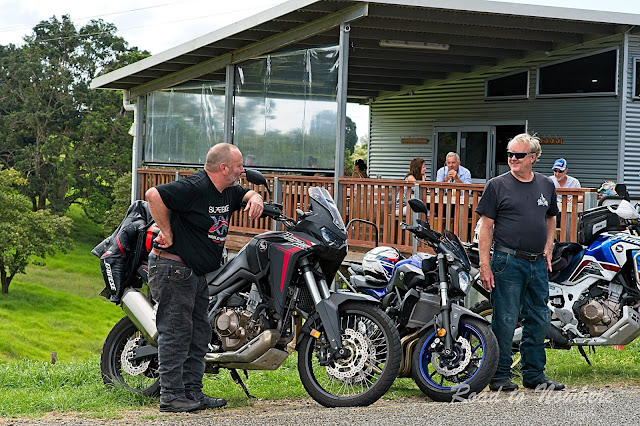 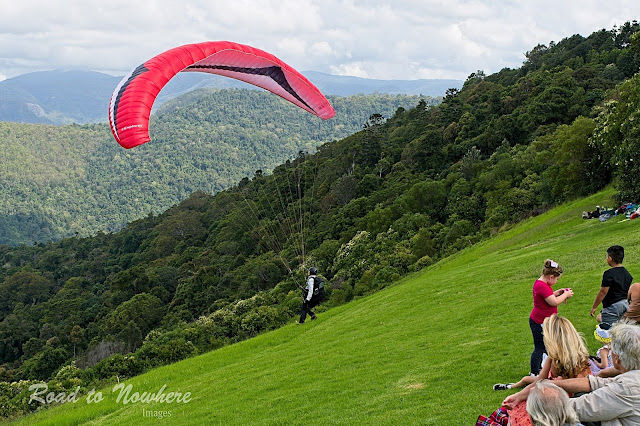 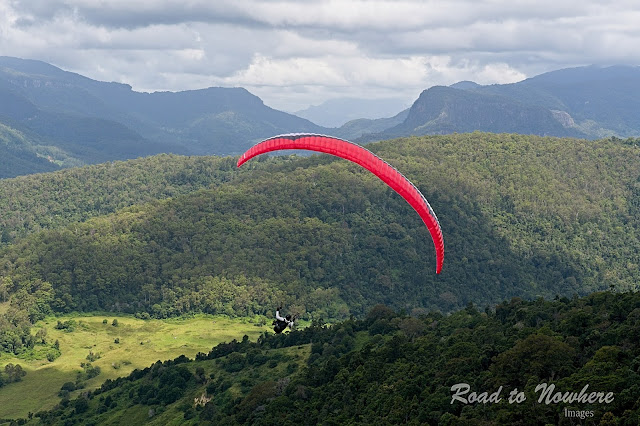 The ride down through the Numinbah Valley was quite good, perfect conditions for riding but a little bit busy. The views from the road over the back of the gold coast are incredible. Wish I had of stopped for a photo. At least most of the traffic was now going the other way heading back to Brisbane/Gold Coast. 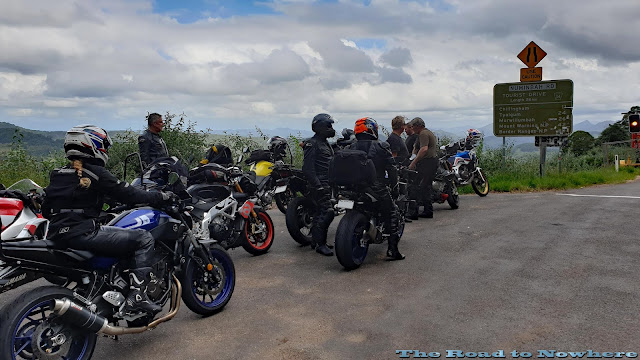 There was a little bit of a mix up at Chillingham and Flyboy turned off, but the main group didn't follow. He chased me down but Dave was just in front rode off into the distance. So we took the back road through Tyalgum and did and extra 28kms of twisty bits whilst the others went through to Murwillumbah. I caught up to Geoff just out of town as we then headed into Uki and the Mt Warning Hotel for a cold beer. and to get out of a passing rain shower. 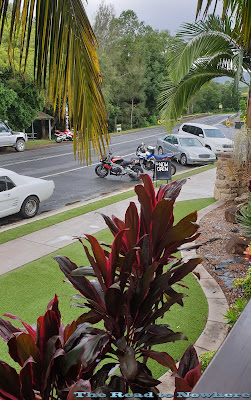 Most of the guys quickly finished their drinks and headed off. There was no rush, so Dave, Scotty, myself and flyboy stayed on a bit to let the road dry out a bit more. So we slowly had our drinks and left about 15 -20 minutes later. The road had dried out quite well by the time we headed off.
The run up and over the mountain on the Kyogle road was a fantastic run. I stopped to catch a quick pic of the guys coming up the hill. Would have been better if I had some time to get out my camera instead of phone. 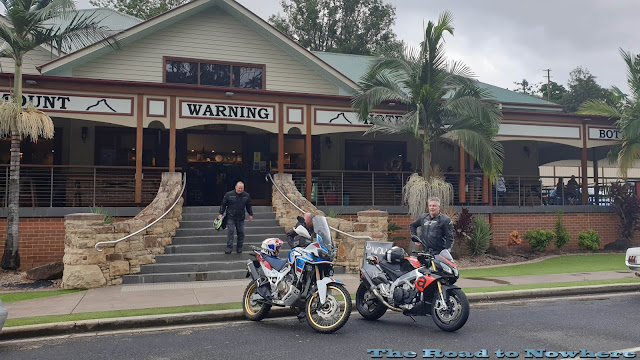 I could hear Dave's Tuono firing up and around the hill above me whilst I waited for Scotty and Flyboy to come past.
Time to put the phone away and get to the pub. Looks like we just made it in time as the pub was closing at 5.30pm. That's quite odd, both pubs in town were closed on Sundays after 5. The girl did manage to stay open a little longer for us. So we bought some takeaways and headed to the local Chinese restaurant for diner. I've never seen a place in Australia where all the pubs were closed by 6pm on a Sunday. Really strange.
Day 3 Map Reference
Posted by Steve at Sunday, March 21, 2021