Sydney Melts in heat, too hot to ride

Sydney has sweltered through its hottest day in history(well since records have been kept at least), causing scores of heat-related illnesses, transport chaos, melting roads and bet a whole heap of air conditioning units crapped themselves today.
The temperature hit 45.8°C(114°F) at Sydney's Observatory Hill at 2.55pm today, exceeding the previous record of 45.3°C(113°F) set on January 14, 1939 making it our hottest day in 74 years.
That was topped by temperatures in Penrith, in western Sydney not to far from where I live, which reached 46.5°C(117°F).
Far to hot to be riding motorcycles in although I did see a guy commuting home this afternoon on his bike, he was wearing shorts and Tee shirt, helmet and no gloves. He must have been roasting in the heat poor guy.

My new camera arrived in the mail last week so I'll have to get out for a ride soon when its not so bloody hot and test it out. I ended up choosing another cannon IXUS camera for a number of reasons which were

1)  I wanted a small camera I could fit in my pocket, so no DSLR cameras. Can't carry much on an R1 and I'd probably not stop to use it if I had to unpack it.

2)  I was happy with the previous camera and not wanting to learn everything from scratch again on how the whole bloody camera operated if I got the same brand it would most likely work the same. And after playing with the new camera for 5 minutes it has confirmed that opinion with all the same icons and settings etc that the previous camera had albeit in slightly different spots. Still not to much to learn. I already know how to use it.

3)  I had accumulated enough points on our credit card rewards to order the camera for nothing - so in effect it was a free camera. Win Win.

Between Christmas and New Year we went on the Saturday morning on the spur of the moment to visit my parents who live out in the country about a 5 hour drive from Sydney. A quick phone call to them and we decided to meet up for lunch in bathurst, roughly half way for each of us to travel. So we quickly bundled the kids in the car and got going at about 10:30am.

We got there by about 1:00pm and then met at one of the local pubs for lunch. At the pub we saw several bikes up from Sydney for a counter lunch, and what a fantastic day it was to be out for a ride. After saying our goodbyes I decided that we should go for a drive up to Mount Panorama. For those non down under readers Mount Panorama is Australia's premier car racing street circuit(they used to race bikes here but was discontinued due to it being to dangerous - coincidentally Micheal Doohan won superbike races at this circuit before he became 5 times 500cc World Champ).

When there are no racing events on, the circuit is actually a public road with a 60kph speed limit which is enforced, we saw a highway patrol car on the circuit during our 2 lap stint. The circuit is 6.213 km long and has an elevation change of 174m with grades as steep as 1:6. The track is run in an anti clockwise direction during races but during non race days traffic can go in both directions so we did a lap in each direction.

The drive to the top of the mountain is always fun and there are spectacular views from the top. I was wishing that I had my bike today and not the car.

We stopped at the top of the mountain for a few pictures before continuing around the circuit. It was here that the blurry vision started. What the heck is going on, this hasn't happened to me before. Oh and no it wasn't me that had the blurry vision as you can see in the next 2 pictures..... 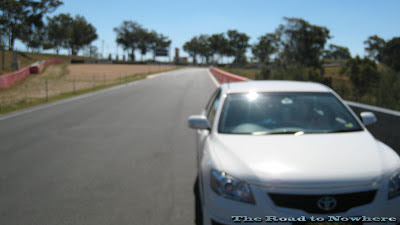 Yup it looks like after 5 and bit years my faithful point and shoot camera had finally given up the ghost. It was no longer refocusing after taking the previous photo. So I came home with a bunch of blurred photos which were pretty useless. My old Canon IXUS 7.1mp camera was no more. At least I would be able to now upgrade to a newer camera with better image and video quality as they are all HD video quality now. A new camera has been ordered and I eagerly await its arrival.
Posted by Steve at Tuesday, January 08, 2013 11 comments: