Tag a mate who's slower than a bus

Yes we all have that one friend we ride with that likes to tell you how fast he is and how slow you are. Here is a video of that said mate...... 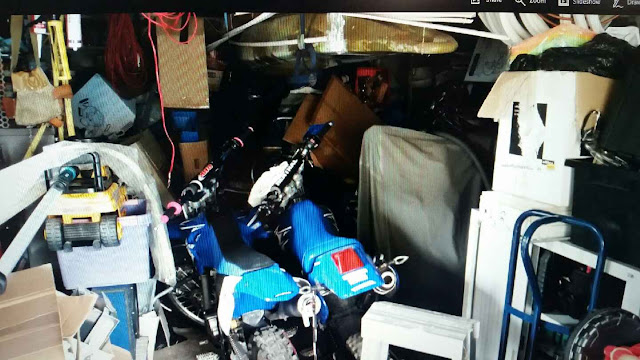 Email ThisBlogThis!Share to TwitterShare to FacebookShare to Pinterest
Labels: #Excuses, #no ride, #Soft

After last weeks flat battery incident when getting ready to leave for our ride I decided I'd get myself a battery tender and whilst I was at it a new battery for my old R1.


I had heard good things about the Ctek battery tenders and let the moths out of the wallet and got one finally. Putting the battery into the old R1 it fired right up after 2 years of not running once I remembered to put the choke on that is. How easily we forget once we get something a bit modern!. Now I will be able to run it monthly to keep it going. I will alternate the battery tender weekly or fortnightly between each bike to keep them in good running order. 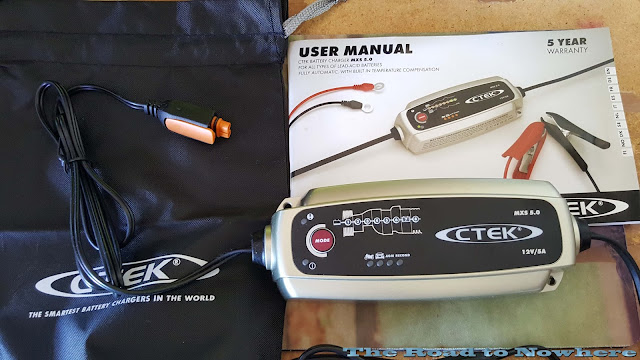 I had an invitation to ride on an overnighter to the Oxley Highway and Gingers Creek in Northern NSW as one of the guys is going overseas for 6 months and this was his last opportunity to get out for a ride until he gets back. It didn't take much arm twisting for me to say 'YES' to get me on the ride when Gingers Creek is named as the destination. Its one of Australia's best riding roads.

DAY 1
I put in the key and and pressed the start button to be met by the sounds of a dying battery. Damn. I had to jump the R1 from the car battery to get going. Its been 2 months since the last ride and 2 months before that one so unless I get in some more riding or buy a trickle charger this battery won't last long.

This mornings departure was a little different than the others and we were to meet up at the Old Rd cafe for breakfast. The Old road is another iconic Aussie bike road which I've covered numerous times on this blog. I noticed that there were a couple of new MV Augusta parked out the front. Turns out it was Boris from Motorcycle new was having breaky at the cafe. 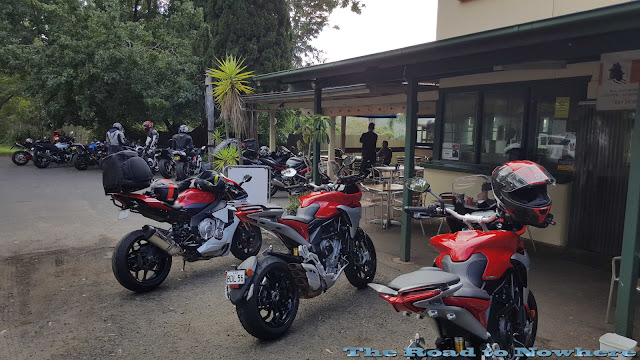 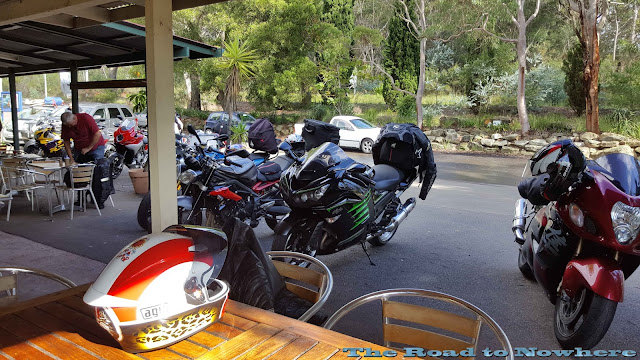 After a quick breakfast we headed off up the old road and turned off towards Peats Ridge and on up to Wollombi. I noticed that the famous lemming corner has been hot mixed on both the left and right handers. Apparently this is one of the most dangerous corners in the whole state. Explains how it got the name. 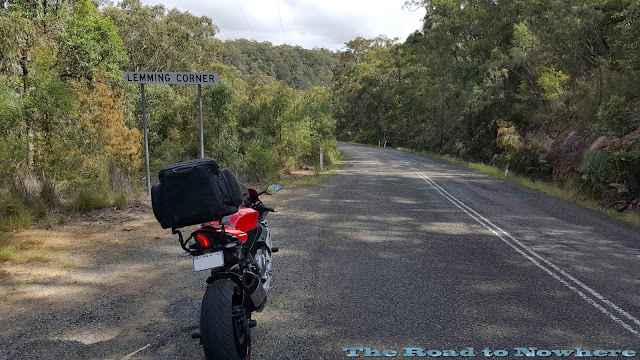 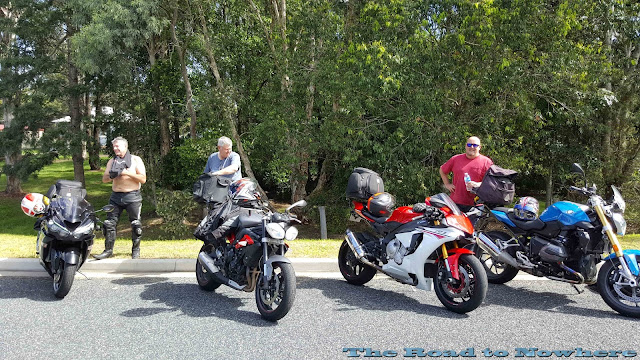 We then side tracked around to Dungog and kept away from the Gresford goat track. After the last ride through there I got hammered from the rough road. We went through a couple of light rain showers along the way not heavy enough to warrant stopping and putting wets on though. We stopped in at Dungog and had a bit of lunch at a cafe and continued up to Gloucester and across to Taree where we made our way to Harrington and had a beer on the waterfront waiting for Geoff to arrive. Turns out he went straight to the Coopernook pub instead so we made a beeline for our digs for the night. 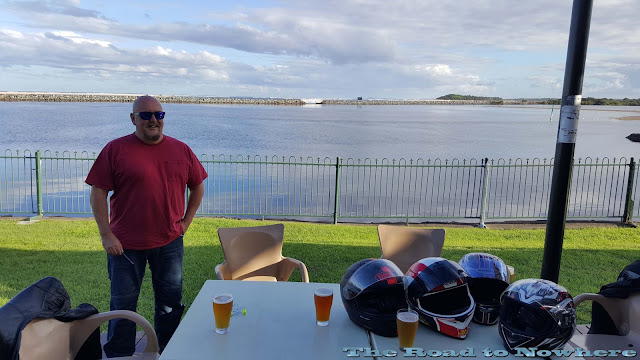 DAY 2
I'd slept in a bit this morning and the guys were just about ready to go by the time I got up. We got underway soon after and took the Pacific Hwy to slab it up to Wauchope were we stopped for a coffee and  fuel for the bikes. The road coming up was a little damp but drying. The weather today was perfect for riding, sunny and about 25°C.

The ride up from long flat to gingers creek was just about perfect. The road on the bottom end near Mt Seaview is some of the smoothest road you can find anywhere. There was a little bit of traffic but easily dispatched when you have a R1 and lunatic aboard. 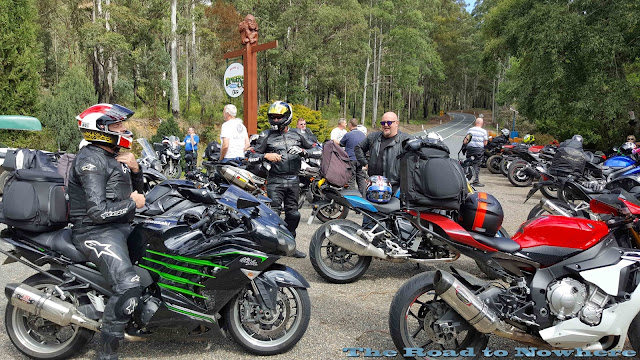 Arriving at Gingers Creek store I noticed how busy it was here today, there were bikes everywhere. We stopped in for lunch and I wanted to try one of their massive hamburgers that I saw Rick get last time we were here. The hamburger was good. I highly recommend it! 😈 After a spot of lunch we took the bags off our bikes so we could ride back down the hill unencumbered. Its amazing the difference in the handling of the bike without the bag on. I followed Bushpig down the hill on his new MT10 and he wasn't going slow even though he was still running it in. This part of the Oxley highway is one of the best riding roads in Australia with 300+ bends in 54kms.

We stopped down near the mount seaview end at a picnic shelter and took a break and watched bikes going up and down the mountain.  Soon after it was time to head back up to meet Doug who was waiting for us at Gingers minding our bags. 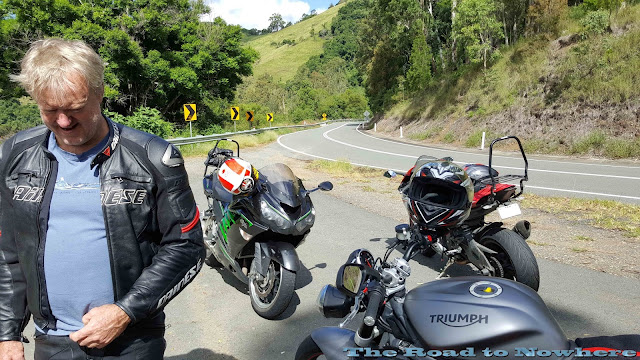 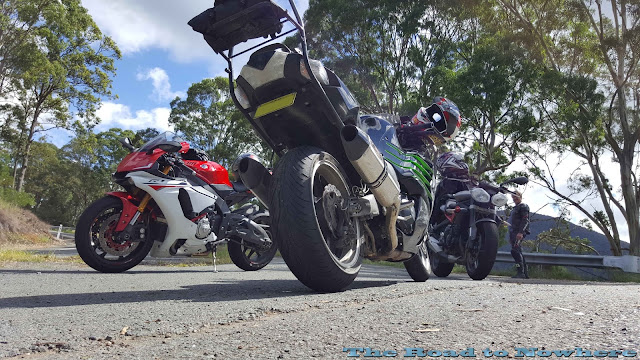 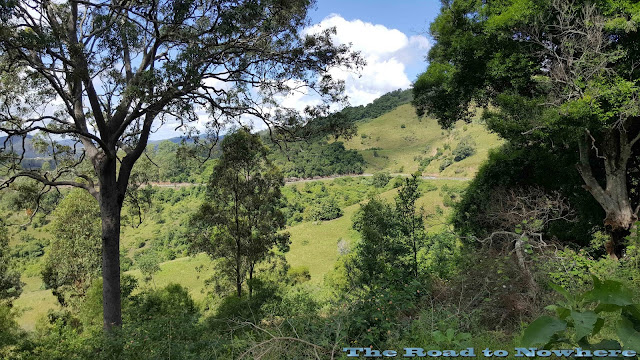 I put the gopro on for the trip down and up and got some footage of the road following bushpig on the way down then with me leading on the way back up. Back up at Gingers i topped up the bike with 5 litres of fuel as i knew it wouldn't make it to Walcha for fuel. The mostly first gear riding along here on the R1 really sucks the fuel quickly.

Here is a short video of the twisty fun to be had on the Oxley. Warning it's just 5 boring minutes of me riding the bends, no cut scenes or story just riding. If you've never been here and are thinking of going and want to know what its like its worth a watch.

As it turns out i was right i used 17 litres (17l tank) just as i got to the 50kmh zone coming into walcha. 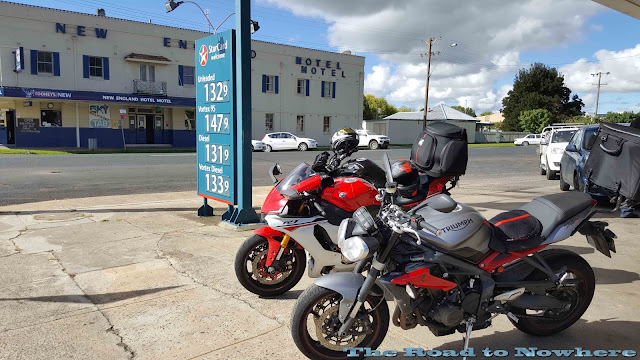 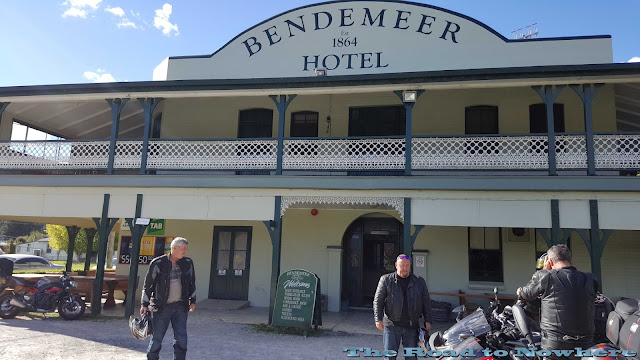 We continued along to Bendemeer where we stopped at the pub for a quick beer. What a great little place this was having a nice cold one in the beer garden by the river. Rick had also arrived 2 minutes after we got here. Beautiful spot but the pub had been booked out by another motorcycle group so we couldn't stay. We made the short 40km trip to Tamworth where we stayed at the Courthouse Hotel another good find with cheap clean accommodation with plenty of secure parking out the back for the bikes.

Getting ready to ride to breakfast I wasn't surprised to see Dr Kwok with the tools out adjusting the suspension on Craig's triumph. 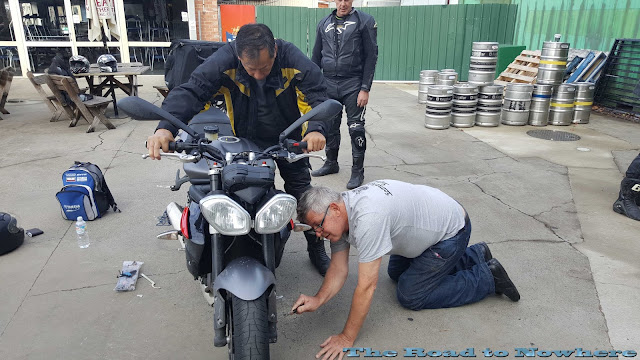 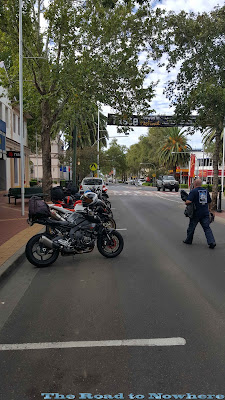 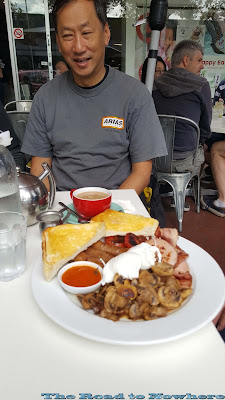 We stopped in at a local cafe for coffee and breakfast. Doug got the big breakfast and it was indeed big, with half a loaf of bread, half a kilo of mushrooms. We said goodbye to Rick here as he headed back north to Brisbane as we were then heading south to Sydney.


We first took the nundle road out through the hills. I really liked this ride with the road flowing along the foothills with a river and valley on one side and hills on the other. The road is one of those open sweeping flowing roads one of my favourite types. There is a short twisting section called Port Stephens cutting that rises quickly up the side of huge hill. 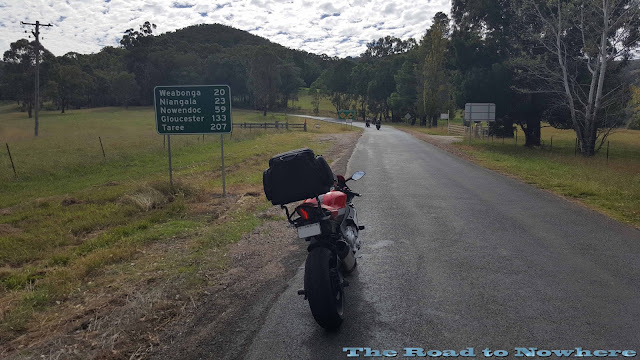 We stopped off in Gloucester for fuel for both man and machine. I was still full from the breakfast so I just had a coffee for lunch. Craig also left us here as he was heading down to Newcastle. We turned off buckets way before Stroud and took the road to Dungog then on out towards Gresford. I wasn't looking forward to this part of the ride but lucky for us they had actually fixed a lot of the road and it was in fairly good condition compared to last time. 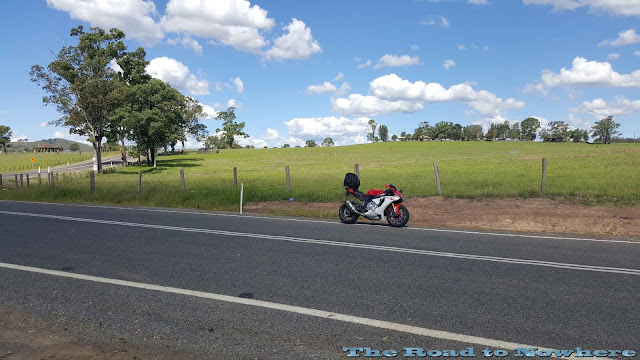 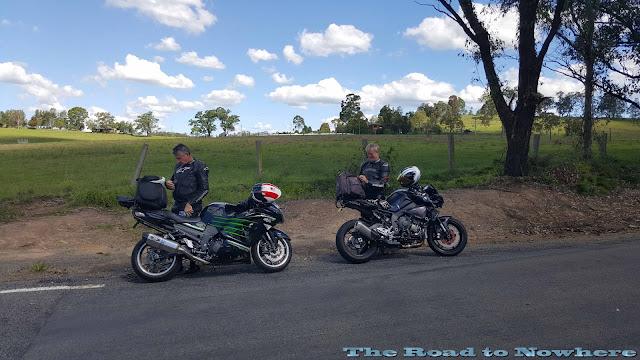 Fueling up for the last time in Singleton we rode back down the Putty road and back home. There was an unusual high amount of traffic on the putty road today and we stopped for a break to let the traffic go so we could have a good run. All up a great weekend away with the boys. This is my first trip out since the new zealand ride. I noticed that whilst we have some fantastic riding roads here in NSW there are so many straight boring long sections of road to actually get to the good bits. Those kiwis are spoilt with their multitude of choices.