Even Homer loves the GOAT

A little while ago I blogged about losing weight and having to do something about my now over sized elephant sized leathers. Well yesterday after extensive looking around at whats available and even trying on bushpigs new dainese suit I decided I'd get myself an Alpinestars GP R jacket with a a set of Alpinestars missile leather pants. I can't wait to get out for a ride in my new gear. Hopefully I don't put any weight on over the coming winter, I don't want to have to buy a third set. Your right bro motorcycles will keep you penny-less, well that and kids. 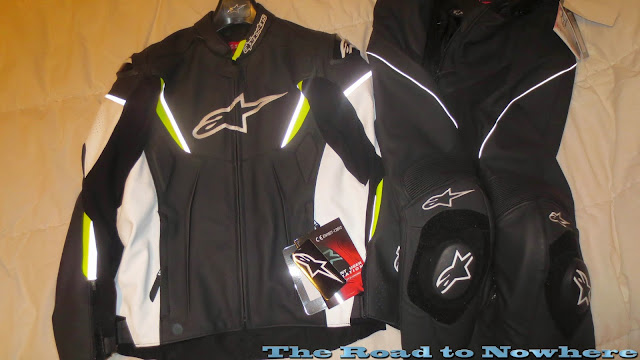 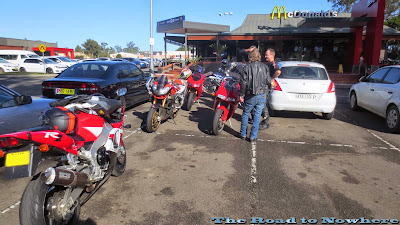 We had an over night ride booked in this weekend. Rowland's was coming down from Brisbane just to be on this ride. He rode through 2 days of torrential rain just to get to the starting line, now that's hardcore. He looks like a drown rat on Friday night when we had a couple of pre-ride drinks. Meeting up at Maccas on Saturday morning the bikes started slow rolling in. Luckily we had nice blue sky's all weekend from this point on but it had turned cold. 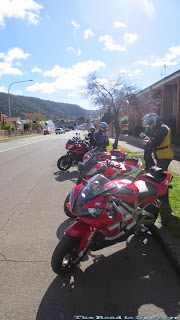 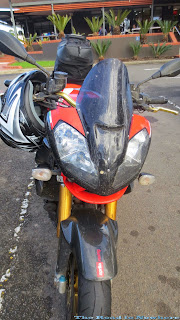 Stupid me turning up 20 minutes early when everyone else was about 20 minutes late. Dr Kwok was first to arrive on his immaculately cleaned Aprilla Tuono as per pic on the right. We also had a support vehicle on this trip as Stewies only road going bike was rat shit.

The 9:30 start time allowed us a quick catch up and coffee and get away in a timely fashion by 10:30. First up was a trip up the Bells Line over the Blue Mountains. First stop was in Lithgow where we found we were one rider short. Ah Ant didn't know we were going to Lithgow as did I but I was just following the others. Turns out Ant went over Mt Vic and was racing to catch up whilst we were waiting on the side of the road getting further behind. 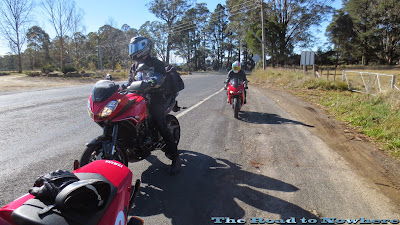 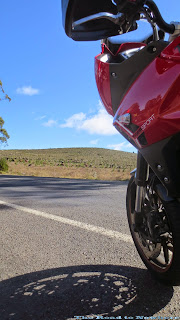 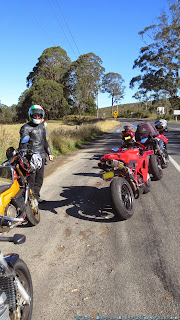 Kicking along we headed out towards Oberon when we came along amongst some slow moving BMW loaded up with panniers negotiating a set of twisties. One of them was motogp styling the corners as we went passed bolt up right at near twice his speed on the bends. Lol. Turning onto Duckmaloi rd was the start of some more fun before we got into Oberon for a sausage roll & pie at the bakery for lunch. That hit the spot just right.

Leaving Oberon after our late lunch we pushed on out through the pine forests along Shooters Hill Road for a bit of fun before joining up with the Taralga road. We stopped to regroup again as we had become spread out, just as Stewie and Scotty roared up in there cars. Continuing on we got into Taralga at the hotel in time to have a beer and a few laughs. 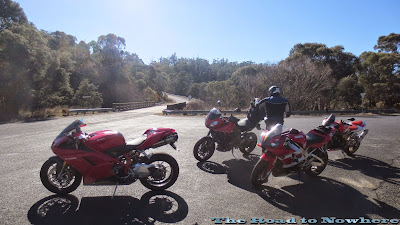 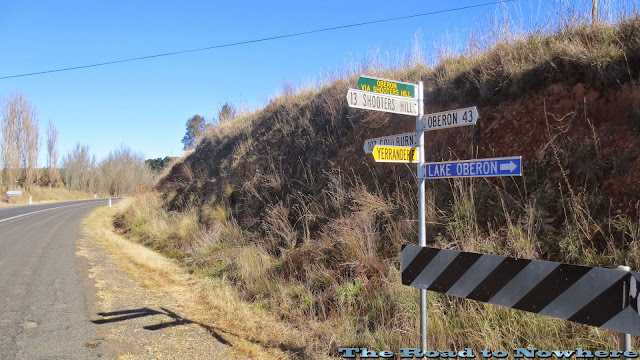 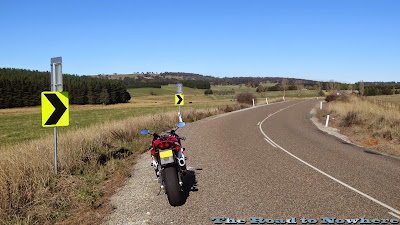 A nice refreshing ale or two was had whilst shooting the breeze in the warm sun at the Taralga hotel. It was getting late so we had to keep moving as it starts to get cold out after 4pm up in the high lands. It was 3pm by the time we got going from here with about 130kms to get to Braidwood and our digs at the Royal Mail Hotel. We didn't get in until 4:30pm and I was starting to feel the cold after 4. Rooms sorted it was time to hit the bar. Many beers were consumed, a few tequila shots and a bottle of rum before the night ended in debauchery......Stewie ended up with a new nickname out of this one, isn't that right Spewie. I can't recall much after that until the next morning but that's probably for the best. 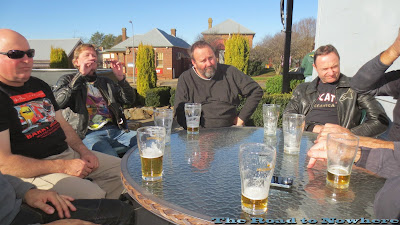 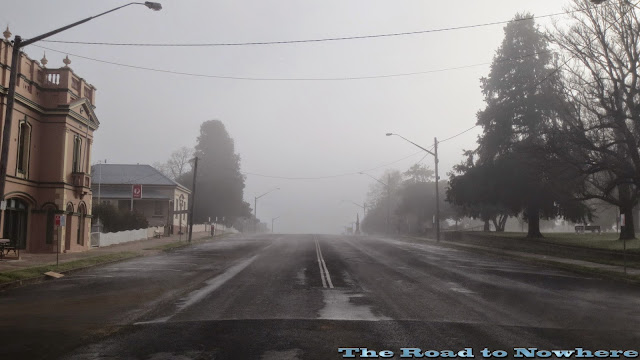 It was a bitterly cold night with heavy frost and fog greeting us. My head was pounding pretty hard and it felt like my throat had gravel rash. Time to seek out some breakfast. Just up the road from the pub was this swanky little cafe something like you'd find in hipsterville Newton. Make no mistake though the chef here was fantastic. The best bacon & eggs I've ever had. I'll be back here again that's for sure. 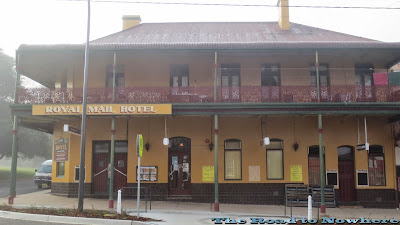 We rolled out of Braidwood in the morning dusty but with full stomachs as we headed up the Nerriga Road towards Nowra. Most of the way was in thick fog with 20kms of dirt to negotiate. We pulled up at the Nerriga Hotel and bushpig took one look at me and burst out laughing asking if I'd come off. I looked at myself and my jacket, helmet and jeans were covered in mud. The dust off the road in the fog had turned to mud. 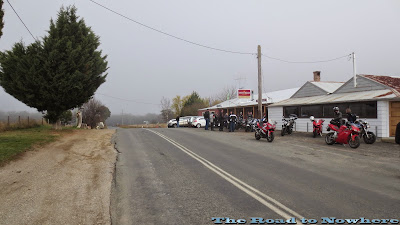 Fueling up in Nowra we turned up towards Kangaroo Valley for some more tasty twisty bits. I think Ant had partied a little too hard the night before and went on straight up the freeway to home. Here Dr Kwok asked if I'd like to ride his Tuono. Would I? Sure I would although I wasn't sure about riding it up through the twisties. A beautiful bike, I had trouble initially trying to get it turned into the bends. You can't ride it like the R1 it handles a whole lot differently. It took me a while to get used to it. But after a bit I was loving it. Thanks Rick. Comfy, plenty of power, sounds good, handles well looks great. 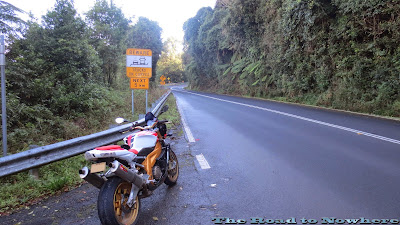 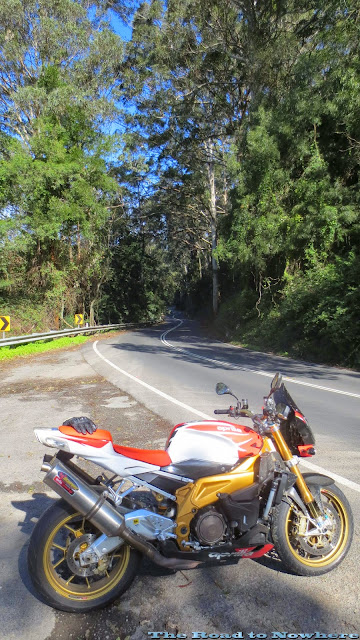 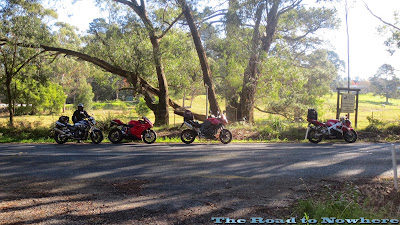 From here I think most of us had been feeling the effects of the late night before and we just want to get on with it and get home as quick as we could so we slabbed it along the freeway to home, not before Paud gave me a quick spin on the 1098 Duc. Wow what a bike, is was incredible to ride. The handling was sweet as, it was actually more comfortable than my R1, but the seat was slightly harder. The bike was very narrow and it felt like you sat down in it rather than on it. The tank on the R1 was much wider. It didn't go below 4,000rpm but boy did it get up and boogie after that. My first ever taste of a Ducati and I liked every moment of it. Now I know why all the bike mags rave about them, plus it sounded glorious. 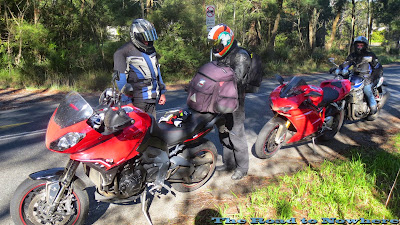 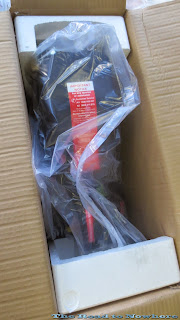 Some time ago I blogged here about my frustrations in filling my tyres up with air at service stations, being a combination of the crappy air hose filler being designed for cars and not bikes and also the faulty compressors. On that ride I'd entered the servo with 27 psi in the front tyre and left after finding the equipment faulty with only 20 psi in the tyre. To say I had the shits would be an under statement.

So after a while procrastinating with the best of them I finally splurged some hard earned and went to Super Cheap Auto and bought myself a small air compressor, hose and gauge/filler. I finally took your advise Bobscoot and got myself one. I quickly ripped into the box and got it set up. It didn't take long at all and I filled up my new from tyre that was completely flat(Valve core/rubber o-ring issues). This little bad boy is great for filling up my bike and the car.

I'd even decided to take the bike out and fill it up with fuel for the up coming ride in 2 weeks time. There hasn't been any riding at all since the track day at Sydney Motorsport Park back in march as it's been raining so much here of late and I decided I'd do some work on the weekends to keep myself busy. Kids and new bikes cost money, lots of money and I think I might have to do something drastic to get myself a new bike otherwise by the time I've saved up for a new one I'll be about 140 years old.. 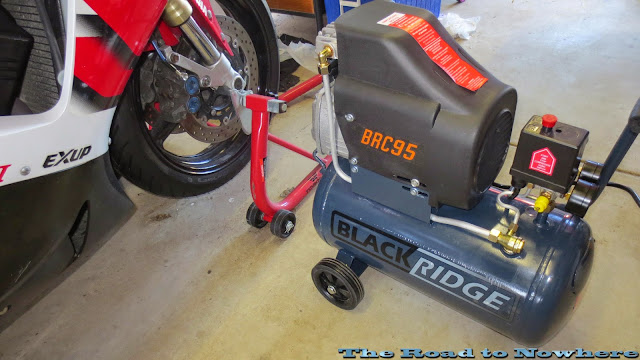