Ride to the Spirit of Tasmania - Pre Tassie Day 5

Today was a bit of a nothing day really as we only had to be in Melbourne 1.5 hours away to catch the ferry across to Tasmania. What could possibly go wrong? Well, when you have a Bushpig in your group anything can go wrong and it usually does.

We got off to a slow start today with no one seemingly having much enthusiasm for a ride. The great Ocean Road was suggested by we would have had to leave 3 hours earlier to get that happening. So the group decided to head over the Sorrento - Queenscliff ferry and then get lunch. By the time we fueled up had breakfast and actually left it was getting late. The ferry leaves on the hour every hour, we just rolled up to the ferry toll booths right on 12pm, there were still a couple of cars being loaded and we just made it onboard. Phew how was that for timing.


Getting off at the other end we were a little seperated and I thought that our fearless leader Doug would stop so we could regroup somewhere soon. Well that didn't happen and after about 30 minutes I noticed there were only 4 of us instead of 6. Yep that's not good. A little while later texts and calls were made and Dave and Bushpig were in Geelong and would meet us for lunch in Torquay. So we had made it to the beginning of the Great Ocean Road, but are unable to actually ride it. So close yet so far.

We were waiting in the bakery in Torquay having lunch when Dave and Bushpig pulled up, Dave ordered some lunch but Bushpig was outside frantically looking through his pockets and the ventura bag, Stu laughed and said 'look he's lost his wallet'. When he finally came in and dropped the bomb that he actually did loose his wallet we all laughed then thought, Oh Shit!

It was just after 2pm by now and what happened next was a frantic ride through the quite busy streets of Geelong looking for a mystery Petrol station and mystery car wash the only 2 places the guys had stopped and used their wallets. Time was ticking away whilst we were getting lost looking for these places as both guys struggled to remember how to get there, google maps was consulted several times slowing us down considerably. We had to be boarding the ship for tassie by 6:30pm and it leaves at 7:30. By the time we had visited both places it was after 4pm now and we weren't sure how long it was actually going to take to get to the ferry. The wallet was lost now and we had to make a dash for the ferry otherwise we were going to miss it. We arrived and there were only a couple of bikes and cars waiting to get onboard so we didn't have to line up and wait at all, we were just about the last to board the ship. 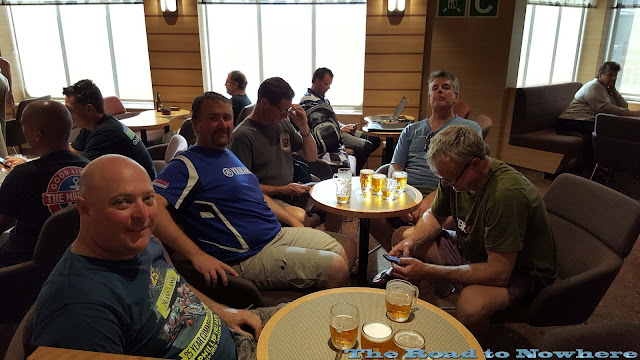 Whilst we were sitting having the beers pictured above Bushpig received a facebook message. The guy that had found his wallet tracked him on facebook and messaged him. He was going to send it back to his address via post. It just goes to show that there really are still some good people in this world.

We retired to the gaming lounge before hitting the sack for the night. 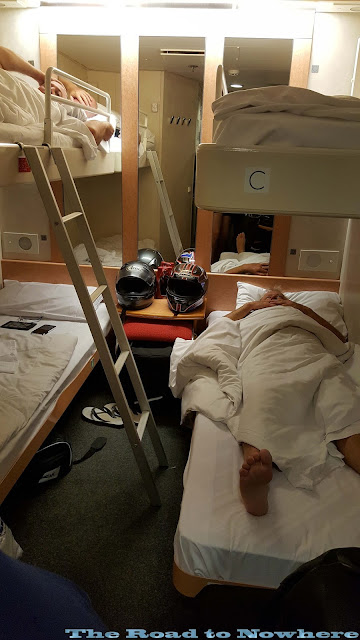 Oh yes those little cabins that you couldn't swing a cat in and with 3 other guys that snore heavily I knew I was in for a night of no sleep. This reminded me of the nightmare we had in Queenstown NZ 4 years earlier. There was a symphony cacophony of snoring, Recordings were made and used in evidence. Everyone was red eyed in the morning when we were awoken by the ships PA system at 5:45am pronouncing the 6:30am departure.

I cant really put a map reference up for today as I've no idea where we went for half of it.
Posted by Steve at Monday, March 19, 2018