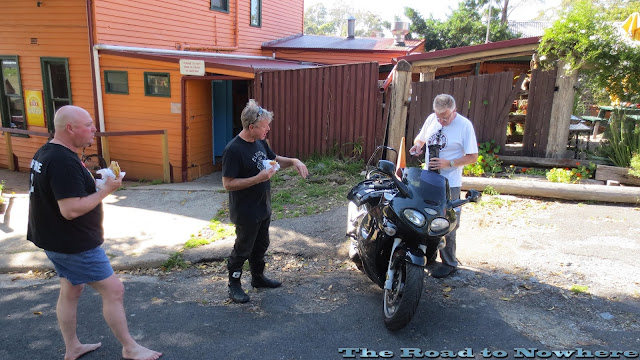 Our accommodation at the Dromadary was probably up there with the worst I've ever paid for and it wasn't just me, I think we were all in agreement that its time to find a new place as this place just isn't up to scratch.
We stood around out back eating our ordinary bacon and egg rolls whilst getting things ready to move on out. We got under way somewhere around 9:30 for fuel just 10 minutes down the road at Carbargo. The pub here looks inviting maybe we should stay there next time. 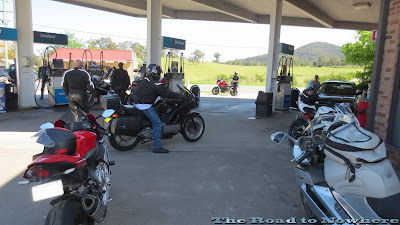 Not long after Bega we took the turn off for the Candelo-Bega road and on into Wyndham. This bit of road is a bit on the rough side but is motorcycle heaven as the corners come thick and fast as the rolling hillsides give up to the forested mountain twisties. There was a couple of brown trouser moments when I hit some gravel patches that were hidden in the shadows on this road. I saw Stu in front of me having the same moment. 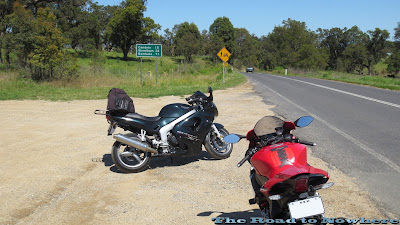 Here's a short little video of the road through from Candelo and to Wyndham.


We regrouped at Bombala at the servo. Again it was a hot day. It always seems to be really hot when we ride down the Bonang highway. I'd loaded up with water this time before we headed off, we split into 2 groups here again and 3 took the Cann Valley Way whilst the rest of us choose the Bonang Hwy. Riding down the twist's and turns of the Bonang is motorcycling bliss. I stopped to take some pic's of the guys in action.

We stopped in again at the fireplace two thirds of the way along on the Orbost end both to regroup and have a little rest. The constant breaking accelerating of this road I was beginning to get sore hands but a 15 minute break off the bike and I was good to go again. It wasn't long and the rest of the group had arrived and we chatted in the shade.


After the break we suited up and headed off but within 100m of leaving the fireplace I could feel something inside my shirt/jacket biting me on the chest. I quickly pulled over to see what it was, as I did the other guys shot past. No problem I'll catch back up again as its still about 40kms to Orbost. Looking inside my jacket and down my shirt I couldn't see anything so I'd zipped up glove back on and taken off again. Another minute later I could feel something biting me again,  I'd looked down and back up again, just enough distraction to come into a bend a little hot, braked a little late fixated and then did some off road parking................

There's no way I could get it out of that ditch without a tow, such a rookie error I still don't know how I managed it really. With absolutely no phone reception in here it was needless to say I waited a long time on the side of the road before anyone came along. 15 minutes it was before anyone came past and that seemed like an eternity. One nice guy in a van went into Orbost to get a tow truck for me to get it out. It was a long, long, wait of over an hour until I heard the faint sound of a couple of bikes coming in the distance. Bushpig and Slomax had arrived back and the shaming had just commenced. The look on bushpigs face said it all.

Long story short it was still rideable, didn't break a single thing, just a bent rear brake lever. I'd parked it very gently. Pulling in for fuel in Orbost everyone was waiting on me so I quickly fueled up and got ready, it was just after 5pm now with still around 2 hours of riding to go to get to Omeo. As it was now late there was little time for photos or anything else, I just wanted to get there without any skippys coming out onto the roads as it was the time of the afternoon for them. 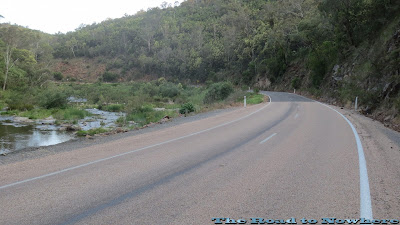 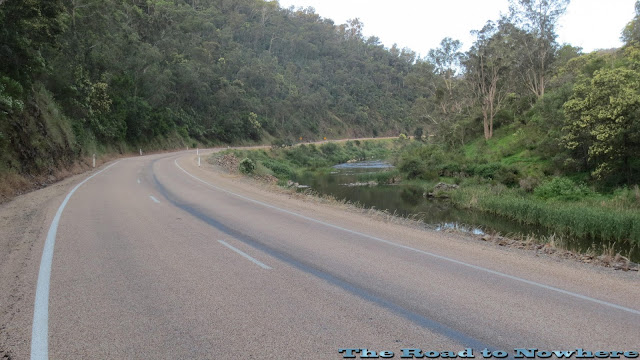 The ride through the tambo river section of the Omeo highway was another highlight of the trip. The road follows along the Tambo river with drop offs into the river on one side and cliff faces on the other side. So I was taking it careful but still having fun. I loved this section but it was getting a bit on the late side and light wasn't as good as it should have been due to some idiot.

I was surprised to find that we had beaten Bushpig and some of the others into the Golden Age at Omeo. It was a surprise because  we didn't pass any bikes along the way and they were ahead of us.  They just had taken an alternate route. God I needed a beer badly. And at that the beers flowed and the humiliation continued................ 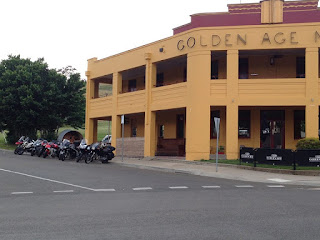