We looked at the BOM weather report eagerly this morning. As our route was to go via Mitta Mitta and up to Khancoban and across dead horse gap to thredbo and end up in Jindabyne for the night. The BOM had thredbo at 2°C all day, feels like -10°C with winds up to 90kmh and snow down to 1000m. Dead horse Gap sits at 1580m and we all agreed to give it a miss. So we decided to head back around to Orbost and head up the Bonang.
I wasn't feeling great due to lack of sleep, thanks Wild Turkey and Cola!!  We headed off down Cassills rd to swifts creek. The road was wet so I was motoring along quite gingerly. As we got further down on the Tambo river section we started to hit some rain, light at first but then hit a fairly heavy shower. I was about to stop to put my wet weather top on but could see a dry spot not to far ahead. Luckily I didn't get too wet and dried quickly. I wasn't really feeling the ride today due to being tired so headed straight to Orbost and avoided the Buchan road, the other guys followed my so not sure if they were just following the leader or couldn't be bothered either.
As we came into Orbost we could see huge black clouds dumping rain upon the Bonang. A few minutes later 3 guys on bikes came from that way. We asked them if it was wet up there and they nodded and said it was raining fairly heavy. So I decided I'd ride around Cann Valley Way and head to Bombala. The others also agreed. Riding up into NSW the wind really picked up and we were getting blown all over the road. It was predicted 70-90kmh winds and we were riding right into it. The group got split in 2 here during a rain shower, we kept going and 4 of the others stopped to put wets on was the guess. 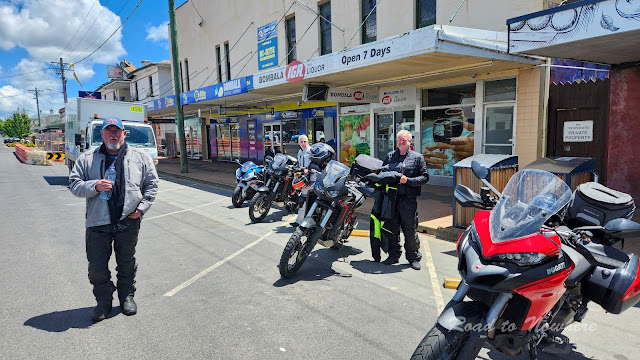 We stopped in Bombala for a snack to eat and waited for the others. It was here we heard that Margos bike had broken a linkage and the suspension had collapsed. Lucky she kept it upright and didn't come off and also the fact that it happened on Cann Valley Way and not the Bonang as it probably would have ended very badly on that road. 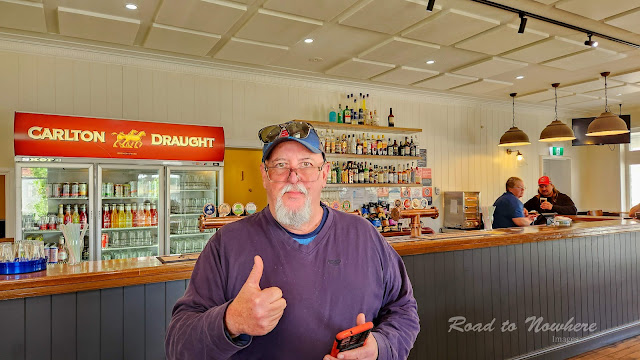 The Imperial Hotel in Bombala has been reopened and its been done up on the inside. Looks like it would be a nice place to stay at again. We haven't stayed here for a few years now. As we were about to leave Stu and Kwoky stopped in for fuel, they had ridden Buchan rd and the Bonang. He said it had mostly dried out by the time they went through. So they looked for some late lunch(2.20pm) as we headed out to Jindabyne. The wind was howling across the high plains and we were getting battered around. 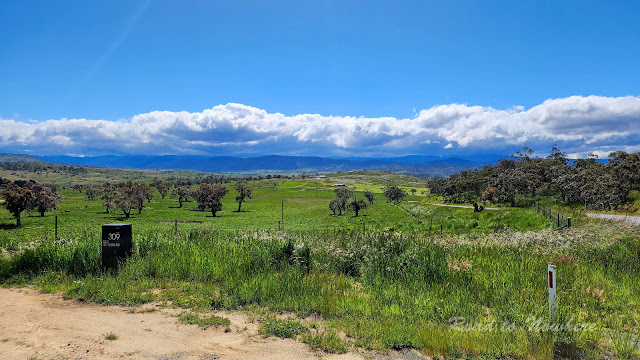 The temperature was dropping the closer we got to Jindabyne as we crested a hill we could see out towards Mt Kosciusko. It was definitely snowing up there. You could see the clouds sitting there dumping. I'm glad we pulled the pin on that route as we would have been riding through snow right now, but we will now be at the Banjo Paterson Inn warming up and having a refreshing beer or two in about 15 minutes. 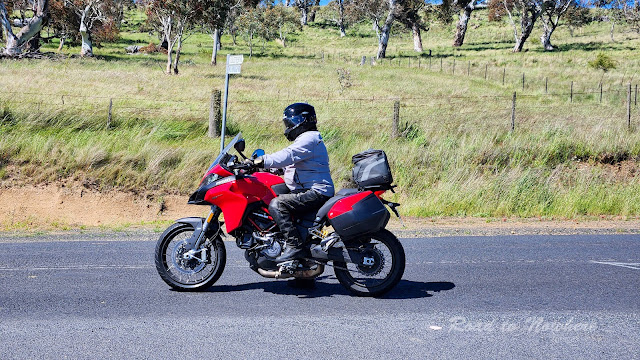 Fueling up the bikes before we hit the hotel was a good idea so we were ready to roll out in the morning. We settled in at the bar and the other boys rolled in about 30 minutes later, they looked cold and hungry and thirsty. So Craig arranged 3 margarita pizzas for them, all washed down with a fine lager or two.

We had the free continental breakfast at the hotel this morning before heading off. The late riders yesterday didn't fuel up so we went with them to get gas. As we were waiting a car pulled into the servo and was covered in snow. I looked up to the hills and all I could see was snow on the hills, with a sprinkling falling out of the clouds, and it was freezing cold standing here in the wind watching all this. 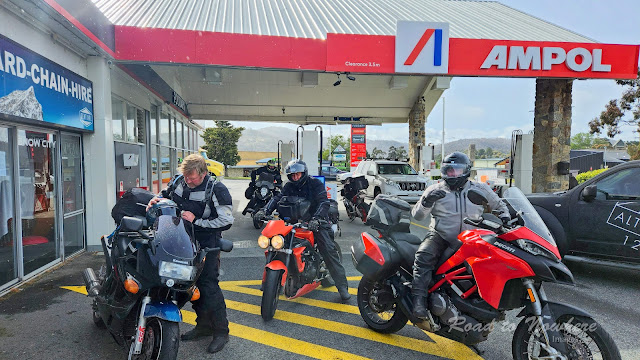 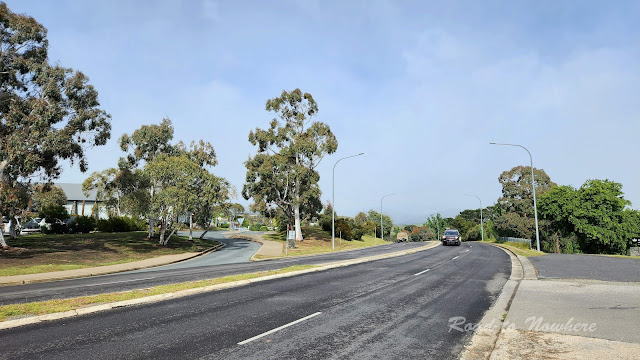 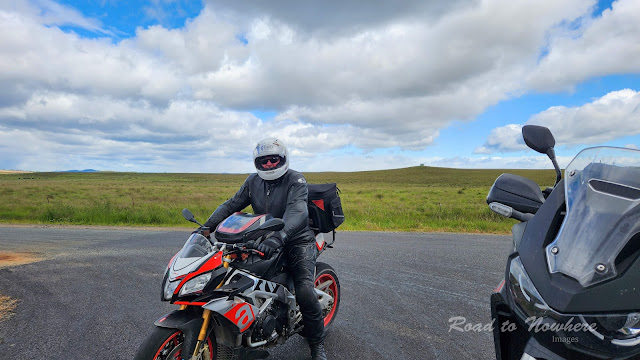 We retraced our steps back across to Bombala via Dalgety on the snowy river way. At least today the wind wasn't as bad as yesterday and wasn't blowing us all over the road and was much more manageable.
Coffee in Bombala then we made our way down to the Mt Imlay road crossing over to the coast. There had been much logging of the forest down here and you could see over the rolling hills in all directions for miles, hills bereft of lucious pine forests, now just a barren desolate landscape.
It wasn't long before we we stopping in for lunch at the Seahorse Inn at Boydtown. They do fantastic meals here and todays was a cracker. Fresh fish & chips for me, the boys ordered quite a few of the seafood chowder. Growing up in the country we weren't brought up much on any seafood so fish and prawns is about as daring as I'll go. But it was excellent local fresh fish. 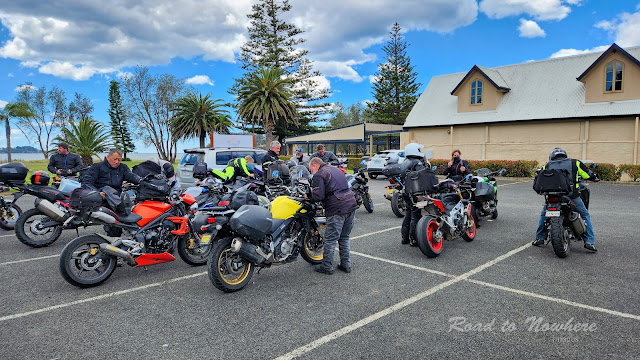 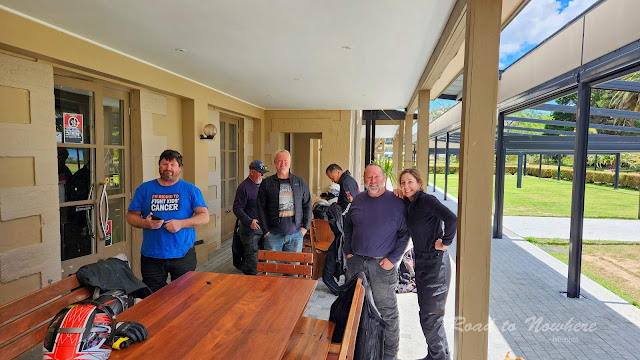 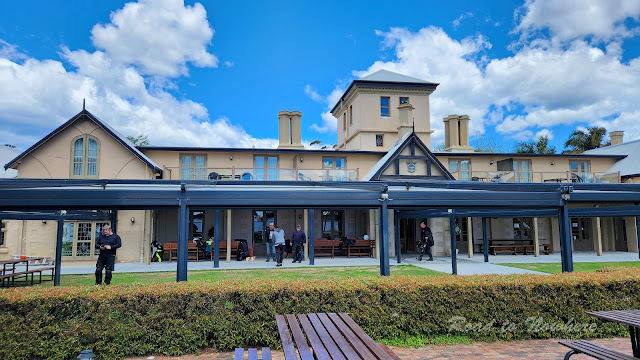 After luch it was time for a refuel and head up to Bermagui for the night. An enjoyable ride if not uneventful. As we dismount at our hotel for the night we are greeted by the news that there is no power in the entire township and hasn't been since 10am. Bushpig immediately starts going into a mental breakdown as without electricity there's no cold beer. "This is Horrible, worst thing to ever happen, what are we gonna do, we have to leave, I can't handle this!" were some common comments during the next hour of irrational babbling that we could understand from him.
We had a quick cold one at the powerless pub until someone mentioned that the local Golf club 200m up the road had a generator and cold beer. We've never seen Geoff move faster....

The last day of this tour is always a letdown in my opinion. It's pretty much the reverse of day 1 which is just the commute back up the coast. So we met for breakfast in the morning at the usual spot, the bermagui Beachside cafe. They do a fantastic breakfast. 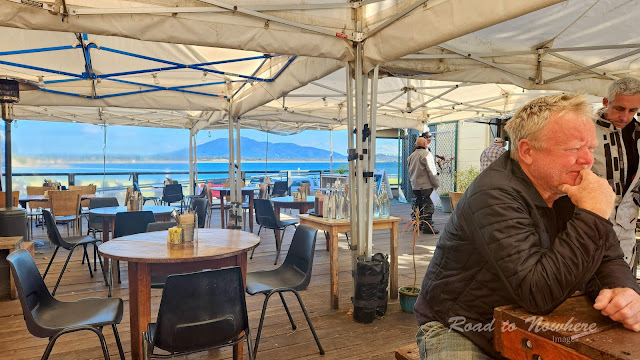 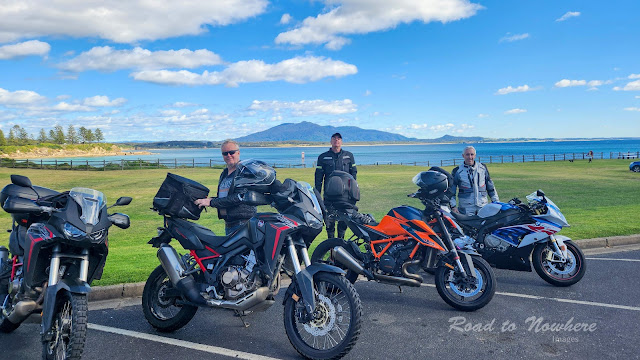 We changed our route on the way back and decided we would ride up through Kangaroo Valley. Good riding on a weekday but too much traffic on the weekends. And it was a good ride up today, with a few roadworks stops but we filtered to the front to get a good run. We stopped in at pub for our last lunch of the trip. Bowl'o Wedges and a schooner of beer before making our way home.

All up another good trip and well done to Stu who would have had difficulty this year trying to book in for 17 people in these small country towns. Bikes, beers and a few laughs with good friends along the way with some great scenery to ride through. Some new gravel roads and hopefully more to come. What's not to love about these trips. Gotta do as many as I can before we run out of time.....
Posted by Steve at Wednesday, December 21, 2022