Today was going to be shortened a bit by the weather as it was expected to turn nasty after midday with showers and cold gusty winds of 40-50kmh. But first another country bakery needed saving and a pie and coffee was beckoning. Having fueled up the previous day we were out and about in no time.
We took the Omeo Highway out to the Blue Duck Inn, where we all regrouped. 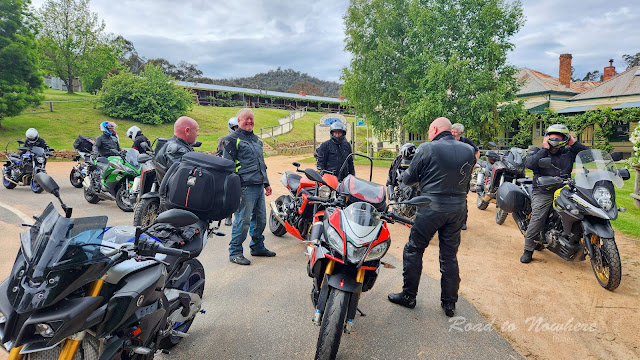 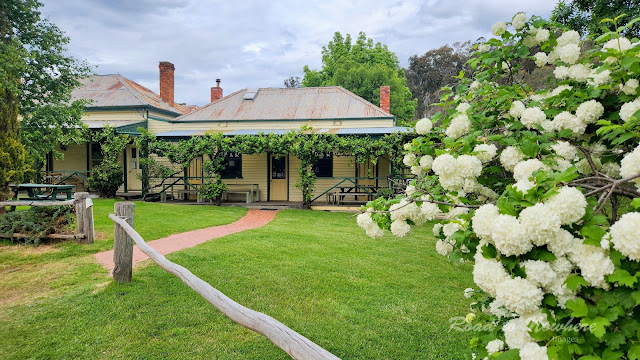 I noticed that they had cut down the willow tree's at the Blue Duck and you could clearly see the river and bank. The sign said they had been removed as the willows were not native and overtaking the native vegetation and were to be replaced with native tree's. 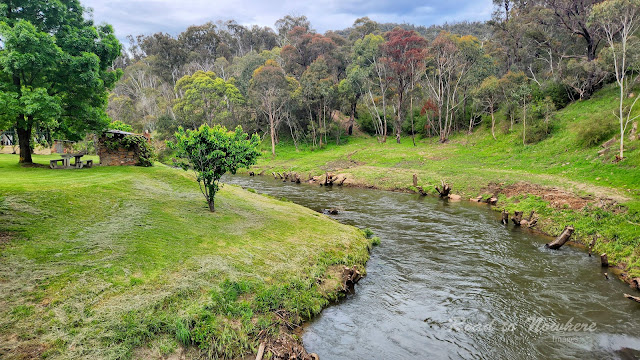 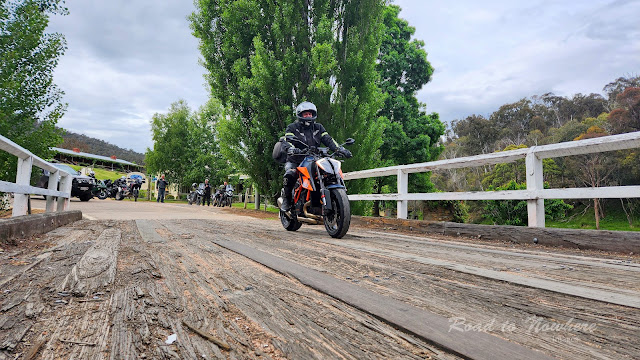 Today was also going to be broken up into two different rides. Whilst the others decided to ride up to Mitta Mitta, I decided I was going to ride up to Falls Creek and back again as we will be doing the Mitta road tomorrow or would we?
It's been a few years since we have been to Falls Creek, I remember the road surface being quite slippery with small rocks. Seems to be much better now. The last 10kms into Falls Creek has had a fresh batch of hot mix tar put down, and was as smooth as a race track. Good fun. We stopped at a lookout, it was pretty cold up here, it was saying 10°C but felt colder. 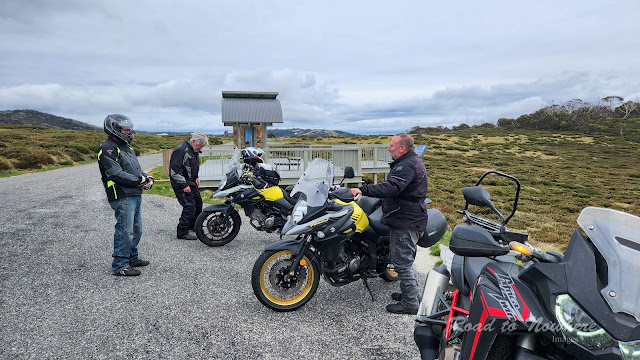 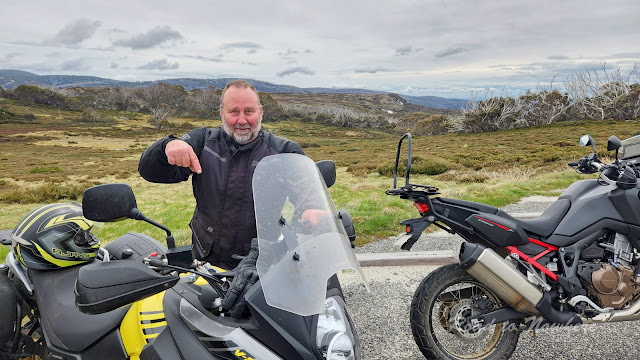 We decided to head into Falls Creek and grab a coffee. As we arrived we noticed a helicopter taking off. It was lifting some fence railing up to somewhere far away. 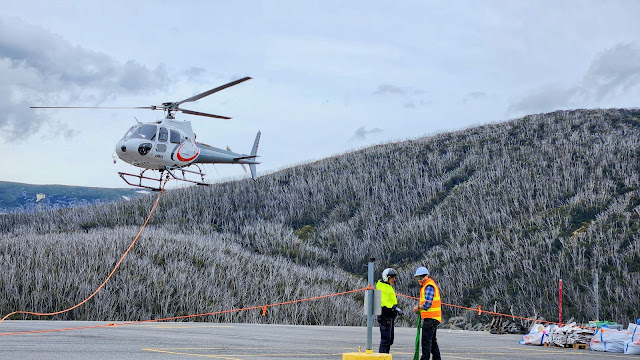 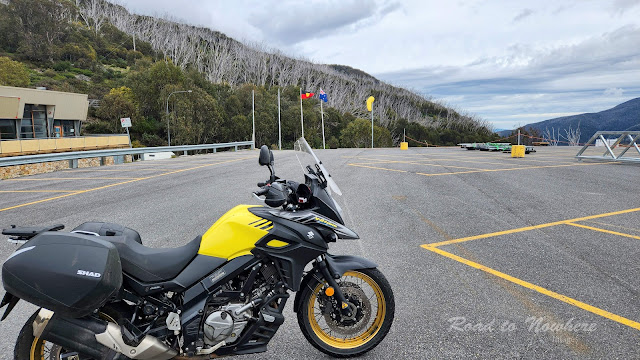 And here this blog post sat for overt a week, due to my daughter giving me Covid. I spent 2 days in bed with headaches, aches & pains but the worst thing was that I could no longer smell or taste anything. Everything I eat has no taste, taking any joy out of eating at all. I then went straight into a 5 day training course. 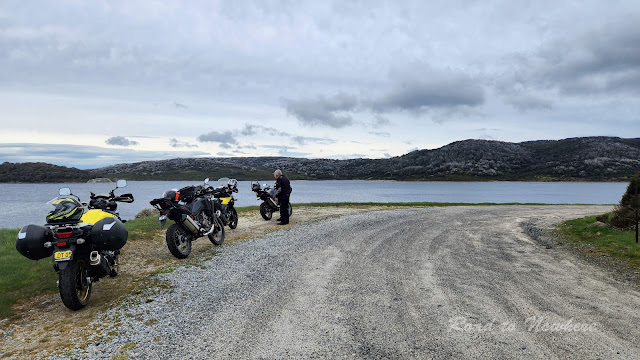 It was time to get going as it was now midday and was starting to get windy, the bike said it was 10°C, the BOM said it was 6.7°C but feels like -3°C and we could see a big storm approaching. The Falls Creek-Mt Beauty road was blocked by landslip on the road so we went back the way we came. We did stop at one of the snow drifts on the way down for a pic. 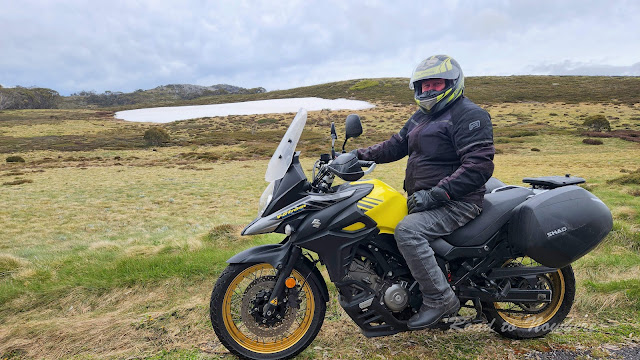 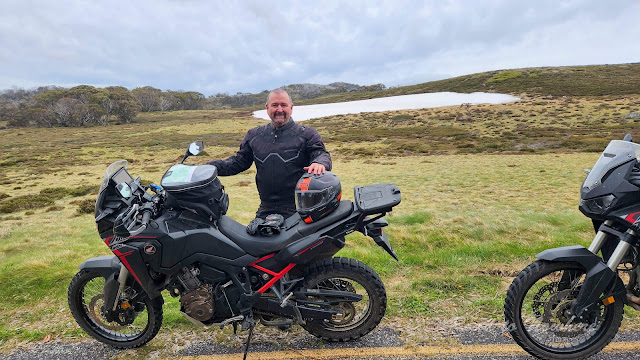 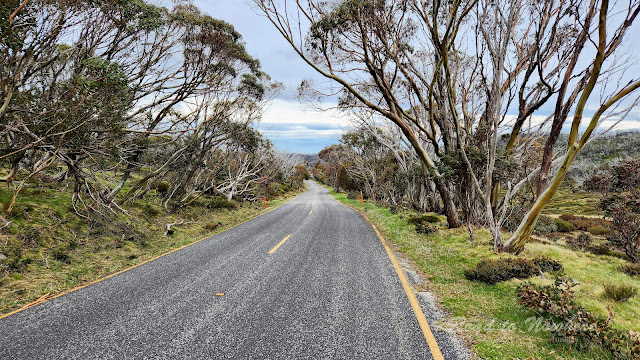 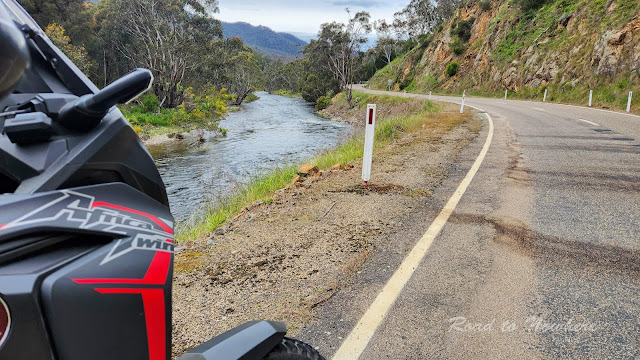 On the way back to Omeo I was following Geoff and Scotty when I watched Geoff run over a stick in the middle of the road, half of the stick spun up in the air and started thrashing around and was biting at Scotty and then Me as we went past. It wasn't a stick at all but what looked like a brown snake(couldn't really tell was moving too quick for that) but I lifted my right leg as I went past, he looked pretty pissed off.
Getting back into Omeo early around 2:30 and Geoff went and rounded up the beers he won the night before in the local raffle and Rick round up the meat tray he won and we headed down to the park and had beers n bbq meat whilst watching countless MTBer's riding through the park. There was a huge event on, the cattlemen 100. Looked like a lot of effort to me. 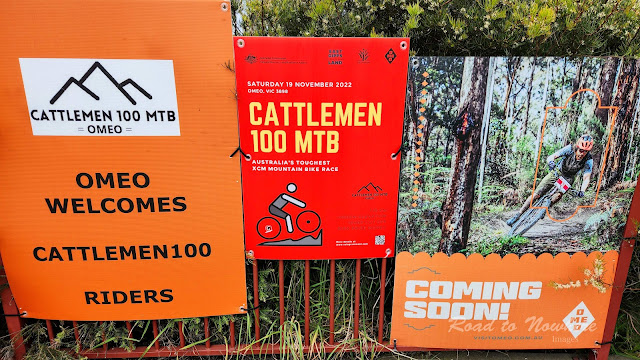 Retiring to the bar early was not a great idea, and neither was switching to Wild Turkey and cola cans this early in the afternoon. Looking out from the balcony after diner it was absolutely hammering down with rain, which it continued doing all night, I know that because all that caffeine was stopping my brain from engaging sleep mode........
Posted by Steve at Friday, December 09, 2022