Tuono wandering and other things

Copping criticism from my older bro about not riding my bike whilst being a moto blogger is not a good look, seeing as he is doing more moto blogging than me at the moment. Not bad for a pushy bugger blogger. So it was time to get out for a ride, and why not as it was a 20°C winters day here last saturday in Old Sydney town.

Ringing around to see who was interested in a short ride I found out Geoff was reportedly going to our nations capital to test his liver functions at a Wallabies game with some mates. Doug and Dave were heading up the Oxley highway for some fun. Stu however wasn't doing much so I dropped in to pick him up. We can't let Dougie have all the fun to himself.

I didn't have much of a plan but Stu suggested some back roads up to Glenorie and then on up to the Putty Road and back again. Only a few hours riding, perfect as it was meant to get cold and windy later this afternoon.

On the way to Glenorie I got stuck at two sets of lights as Stu disappeared into the distance. I wondered if he would stop where he was planning on turning as I wasn't sure exactly where he was going. Turns out he turned off and I didn't. I quick phone call later and we both headed to Glenorie via different routes. Oh well, it was still a great day to be out for a ride.


After demolishing our delicious bags of meat we pointed the bikes towards Wiseman's Ferry and made our way along the old Northern Road. A lot of this section of road has a few very rather large and rather expensive looking houses along here and the roads that used to be rubbish is now a sweet piece of hotmix smooth tar. We turned down Wisemans Ferry road towards McGraths Hill and blasted along then taking the turn for the Sackville Ferry. I hadn't been along here in a long time so it was a bit of fun. The ferry had just crossed for the other side so we waited for it to come back in the nice warm sunshine. Did I mention it was a beautiful day for riding?


We continued along the western side of the Hawkesbury river and up to lower portland through some of the twisties along here. We passed a few slow moving push bikes up the hill and then came to the bridge over the Colo river where I decided to stop to have a look. There was a few kayaks on the river engaging in a spot of fishing. We turned around and then headed back the way we came turning up Packer road that linked to the Putty road. 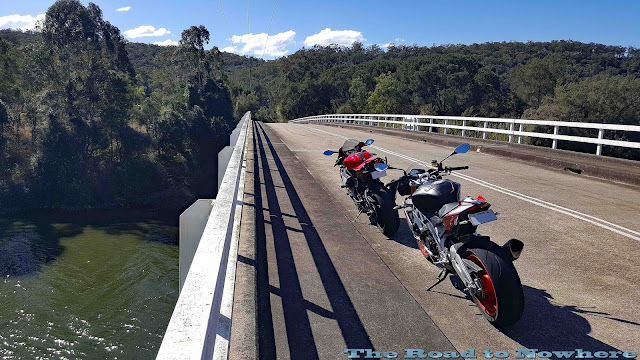 We continued on up the bottom end of the Putty road through the 7km's of twisties where we briefly stopped at the Colo Bra tree. Stu mentioned that he'd never ridden the R1 before and I'd never ridden the Tuono. Now there's an interesting thought. So we swapped bikes for about 20 minutes.

I asked Stu if he wanted to ride back down the smooth twisty bit or ride the other way where the road was a fair bit rougher. He Said "No I want the full experience". "Ok" I said "make sure to count all your teeth".

Riding off following Stu on the R1 I noticed that straight away how comfortable the seat was on the Tuono. Heh heh I bet he was finding the opposite! Hey I like it and this upright seating position is ace although the mirrors were in a bit of an awkward spot. After we turned around and came back down the hill we both indulged in some spirited riding. The Tuono's front end get's extremely light and twitchy under hard acceleration but boy was it a lot of fun. The sound the V4 makes is fantastic. Top gear was punchy as with plenty of torque it just rolls away with ease. I have to put the R1 in 5th for the same result.

A few hills later and we were hard on the anchors as the fun police were out to spoil our ride. He was looking long and hard at us but continued on his way, as did we and we finally came back down the Colo hills and stopped at the riverside cafe. By the time we got to the cafe my butt was still a little sore from the bumps but was feeling lucky I wasn't on the R1, lol. 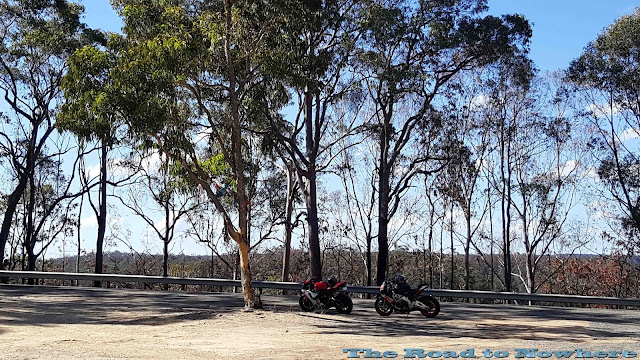 We swapped thoughts on both the bikes. Stu said of the R1 " No matter how fast your going on that thing it just wants to go faster". He had enough of the hard seat after just 20 minutes and asked how I managed to ride this thing to Tasmania and back. We both just laughed. A Tuono or MT-10 will definitely one day be in my future once the R1 goes I think.

We stopped at the riverview cafe for coffee because......coffee. 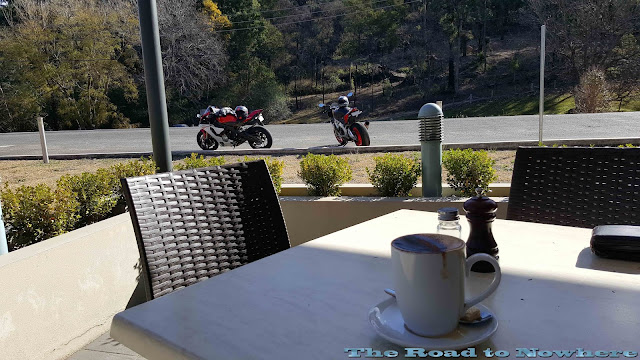 About 5 minutes after I took the photo above the cold, windy weather hit blowing both our helmets off the bikes and onto the road. It was starting to look dark with menacing clouds and it started to spit a little rain so I said let's get the hell outta here and we both headed for home. Another fantastic if not short day out on the bikes. Bring on the summer.