'WTF is that' I thought to myself as I watched bushpig on his triumph riding in front of me as he rode into darkish cloud that was floating across the road. It suddenly dawned on me it was a swarm of bee's. I had about 2 seconds before I would be engulfed by the bee swarm. The only thing I could think of doing was ducking down under the small screen on the R1. Did I happen to mention that R1's have a very small screen, as I went through I could see bee's bouncing around in all directions. As quickly as I rode into the bee swarm I was out again. I checked around and there were bee bits everywhere but no stingers in me. I checked over bushpig and he was all good as well. All this only 5 minutes into the ride. 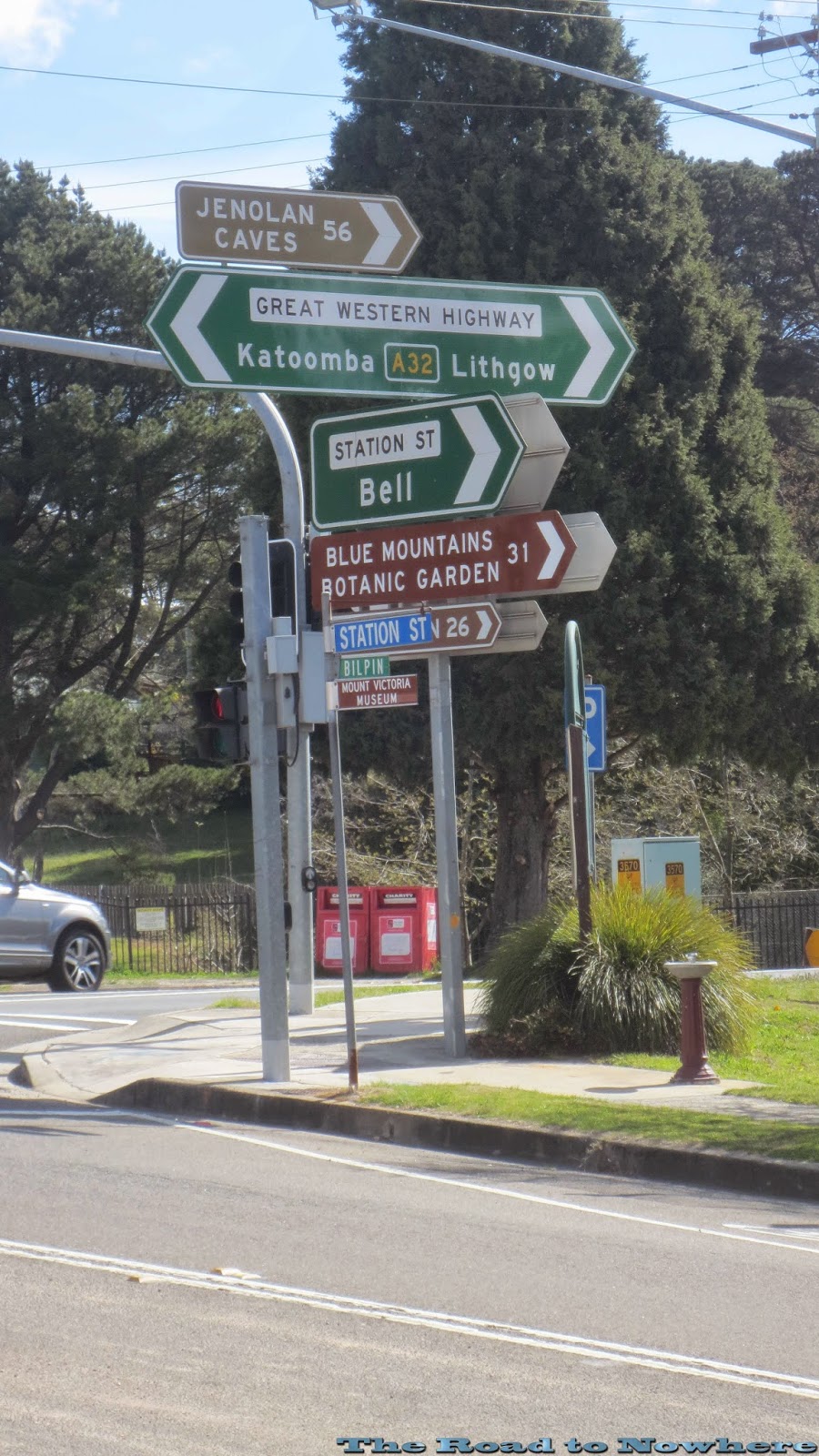 Fridays ride was just a quick one up into the blue mountains via the bells line of road. We decided on having some lunch at the Mt Victoria pub. There wasn't a lot of traffic as it was a week day which suited us perfectly.  Temps up near Mt Bell were a little on the chilly side but that didn't worry me at all.

A great place to give the newly rebuilt rear shock a test. It was immediately clear to me that the rear shock was working how it was supposed to, feeling firm and soaking up bumps and staying firm under acceleration out of corners and not pogoing around.

In fact it felt so good that I could now see that the front suspension couldn't cope with the back being fixed. I might have to upgrade the front too.

As we entered Bell and rounded the corner where the road meets the Mt Vic turn off I heard a squawking noise of a bird then followed by a clunk on the back of my helmet. I was getting dive bombed by a bloody magpie. The little bastard. For the non Aussie readers the Australian magpie is an aggressive little black and white coloured bird that during the spring time will dive bomb anyone unmercifully if one happens to wander too close to its nest.


We stopped in Lithgow for a fuel top up and came back via the great western highway up Mt Victoria. It's sad to see that they have now fitted average speed cameras on the Mt Vic section of road. We were soon stopped at the pub for a quick lunch of wedges and a beer(only one of course). 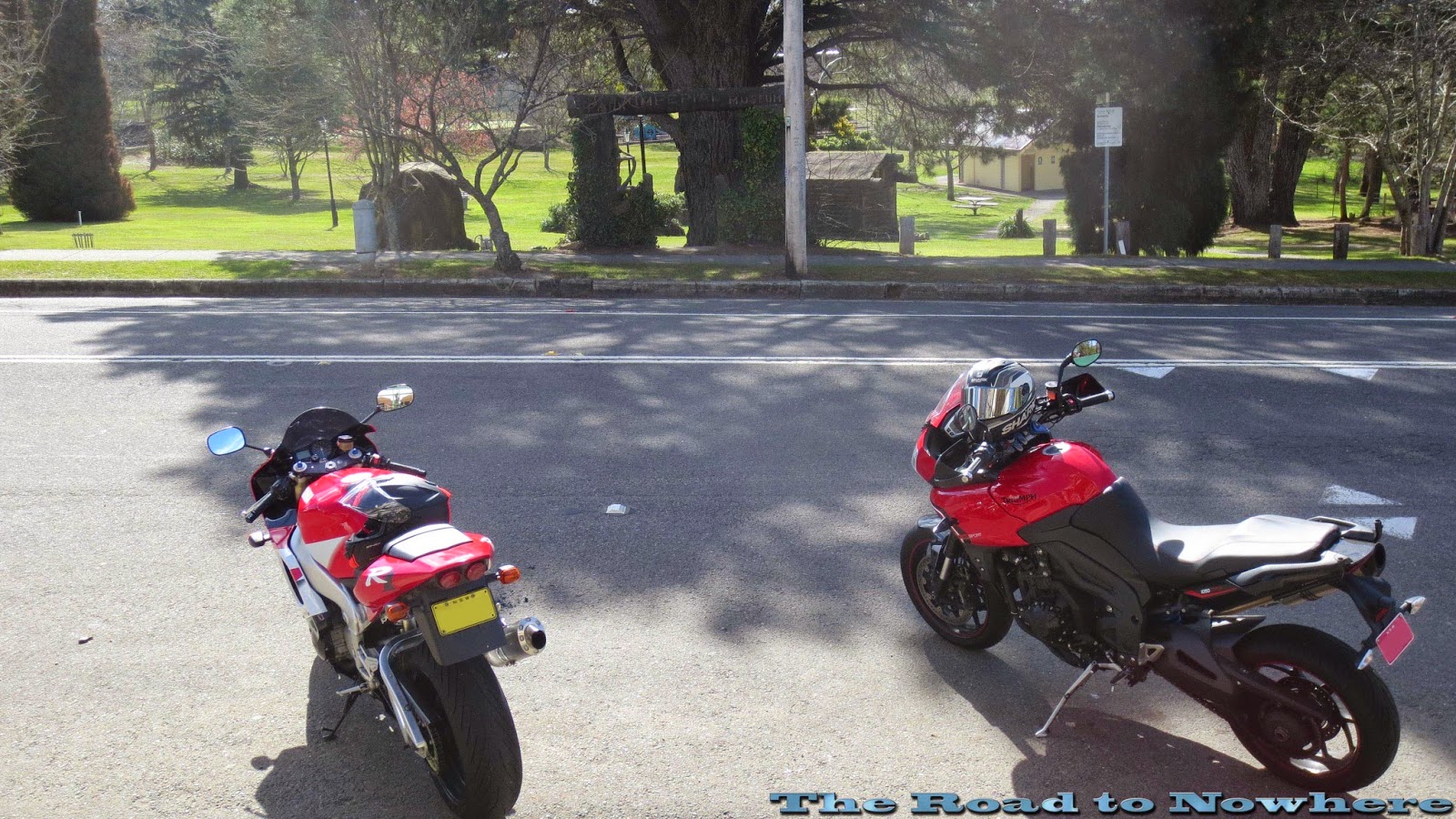 We had soon headed back across to the bells line again but this time I was riding the trumpy and bushpig was on the R1. I followed in comfort, with the trumpy's upright seating postion and reach up to the bars not down, it sure has some grunt out of the corners and it soaks up the bumps well too. The R1 out in front looked tiny in comparison. As we approached the intersection at bell I saw the shadow of a bird and then another clunk on the back of my helmet again. That friggin magpie was back again. We stopped in for a couple of photos near Mt Charles and then continued on. 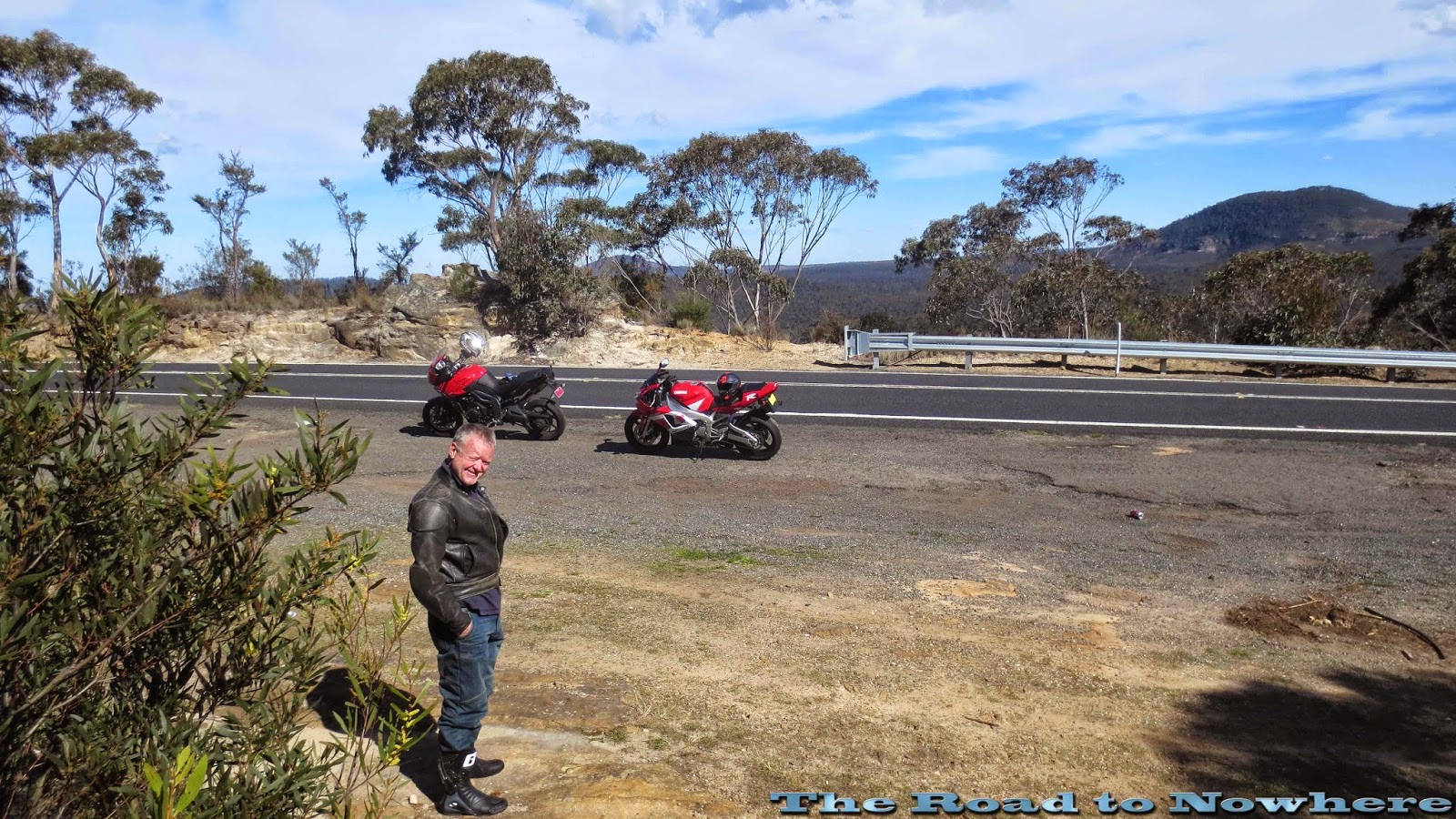 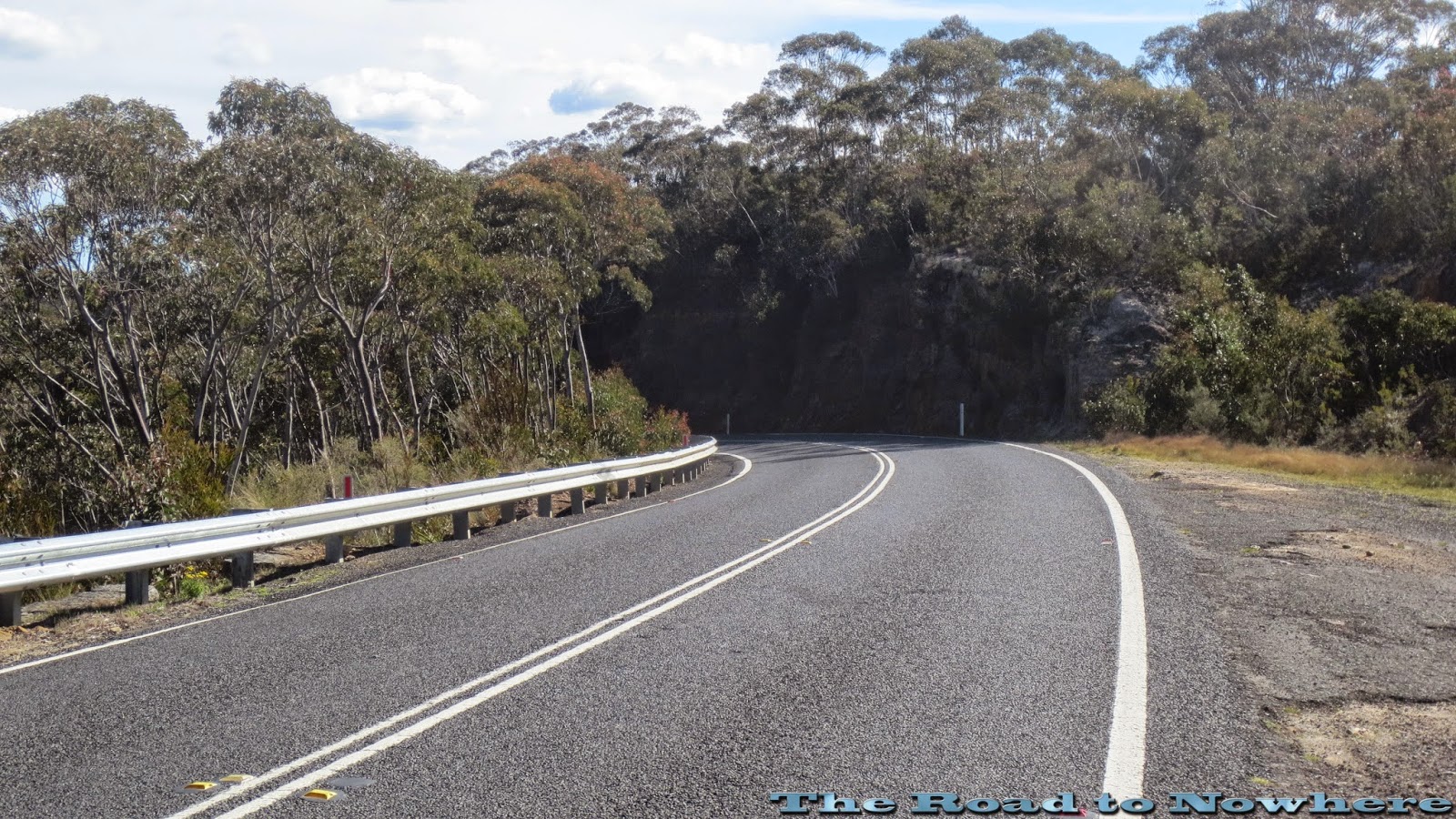 It's only a short ride back to Sydney from here of about 1 hour. A short but good ride just before my annual leave kicks in with a trip of the great ocean road coming up, pity it won't be on the bike though. 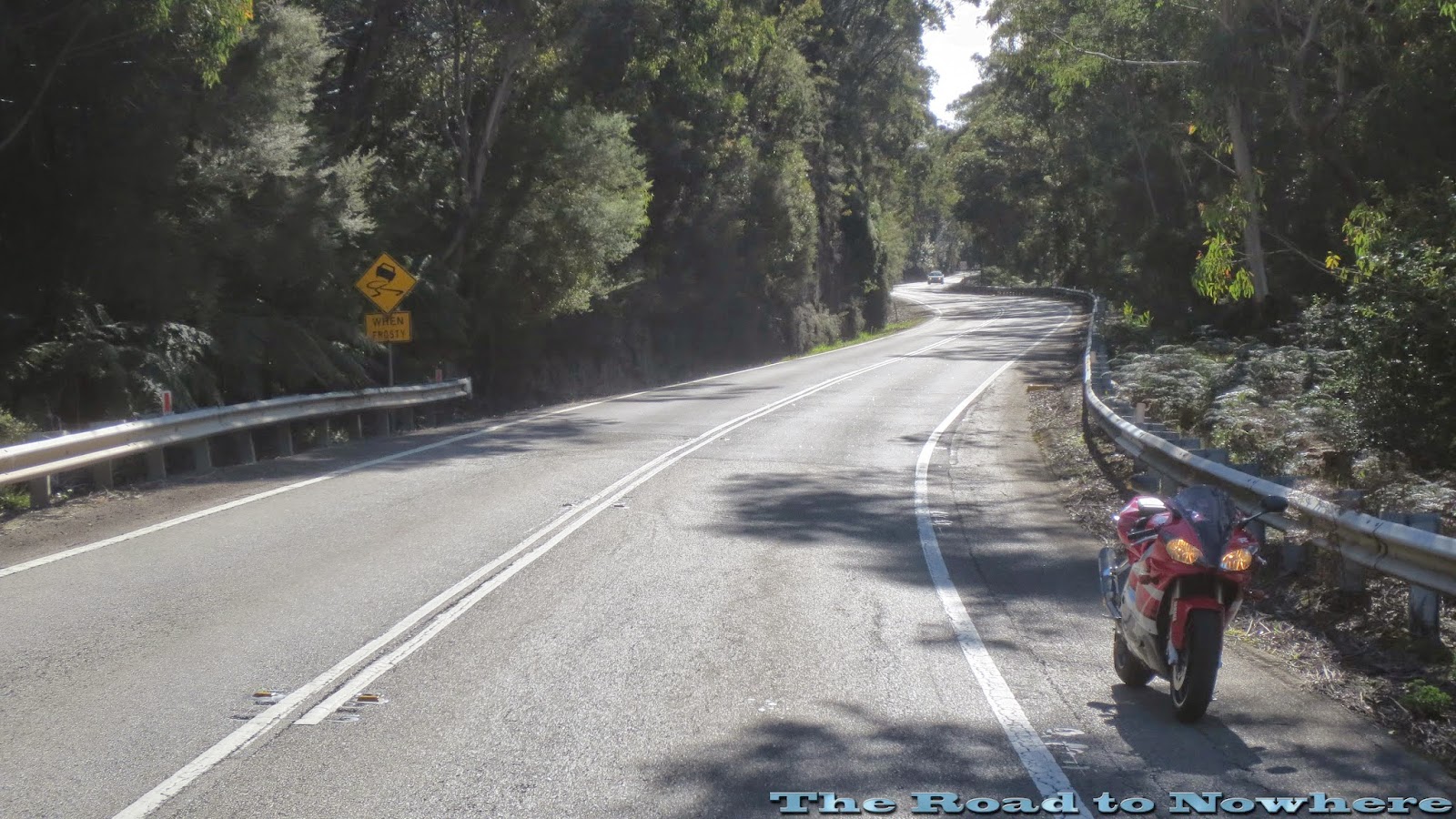