As we were staying at Omeo for 2 nights, today was to be either a rest day or short ride day and was up to what ever you wanted to do. Being in the middle of the Victorian alps with some of the best motorcycle roads in this country I wasn't about to sit around resting or recovering from a hangover which was Geoff's suggestion.

I love staying at the Golden Age Motel in Omeo, $50 for accommodation with a cooked breakfast, it's pretty hard to beat that. And in a great location too. 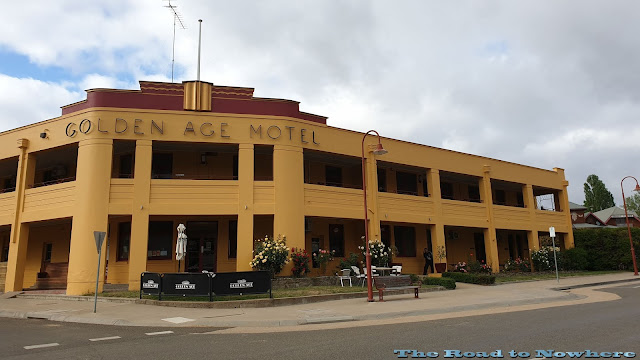 Leaving our luggage behind we rode today unencumbered through some of the twistiest roads. The ride up to Hotham Heights was a bit chilly dropping down to just 7°C. The bike didn't seem to want to tip in, I thought maybe the tyre pressure was down, but perhaps it was temperature related or because I didn't have any gear on the back of the bike. Not sure what but after the ride to the top of Hotham it seems to have disappeared. Doug also mentioned the same thing So it wasn't just me.

The views from Hotham Heights are quite spectacular on a good day, and today was just that. We couldn't have asked for better weather really and it held up for the entire trip. Perfect 21°C in the highlands today and blue skies. Made for perfect picture taking opportunities.

The bikes were lined up for the paparazzi with Face book chimes going off left and right. With that out of the way I made my way to the top of the hill to see if there was some snow still around.

The views from the other side of the road consisted of ski slopes and an empty Ski village. They could be utilizing these villages in the summer for Cyclist, Bikers and hikers etc. 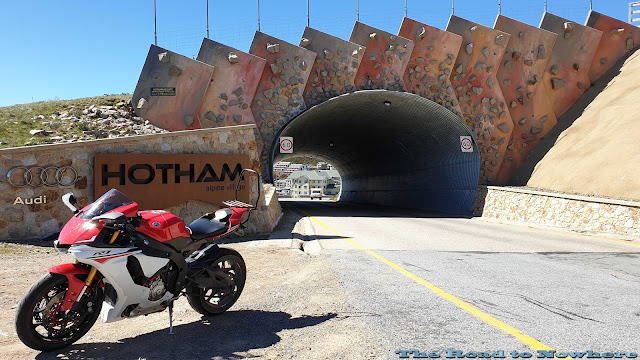 Jumping back on I continue on to the Highest point on the Great Alpine Road, at the Cross which is some 1840m high which is the highest sealed road in Australia. There's only a small snow drift left up here at the moment and looking out at the surrounding hills not much but small patches out there to. 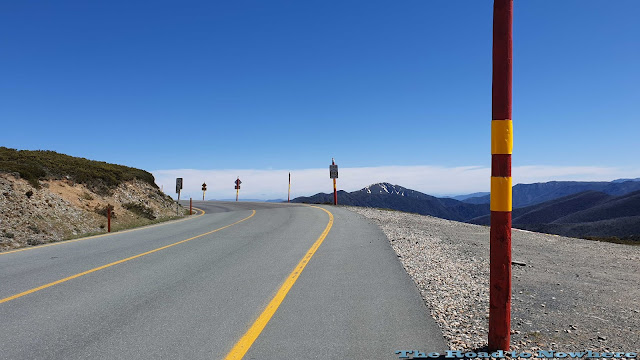 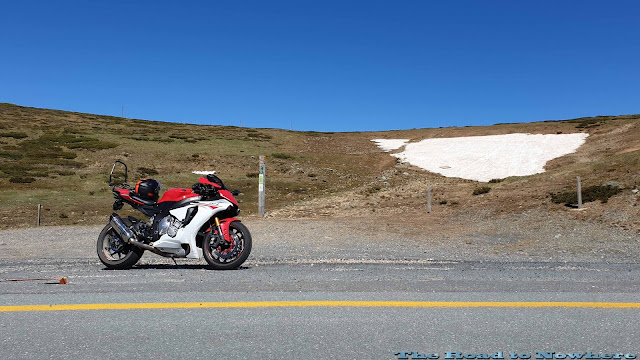 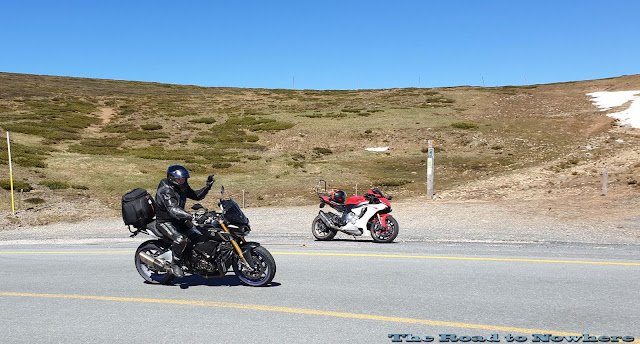 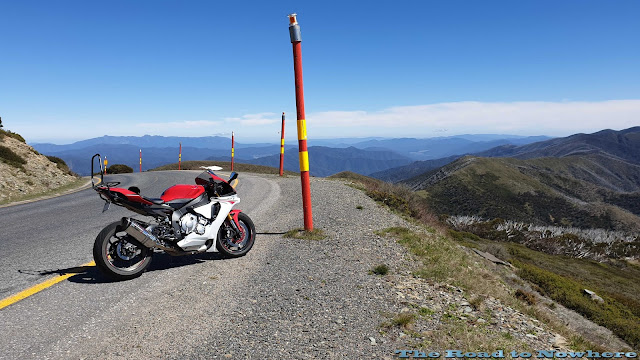 I continued along the road until Danny's lookout which isn't far from the top. As we came to Danny's lookout, a vista of hills and valleys lay before our feet as far as the eye could see. Incredible. 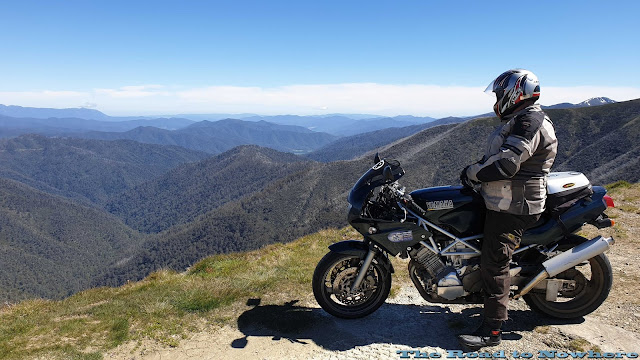 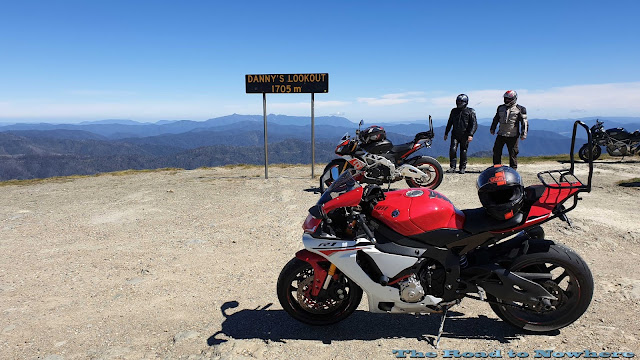 From here we descended down the mountain into harrietville through 30km of 35kmh bends. Its exhausting stuff riding down hill here, concentration levels are high as you can't afford to make a mistake as you will go sailing off the side of the mountain into the forest below.
There was some cycling event on as there were hundreds of push bikes coming up the mountain.

The ride took us up and over Tawonga Gap between Bright and Mt Beauty, one of my all time favourite bits of road. It was also one of my closest calls yet on a bike. Coming down the hill at the bottom viewing point a car turned across the road in front of me whilst I was in the middle of the turn(blind curve). Can't brake here, lucky for me the car saw me at the last minute and stopped and I escaped on the road verge and didn't hit the car or go off the road. Pucker factor 10++. Stupid me for putting myself in that spot to start with. 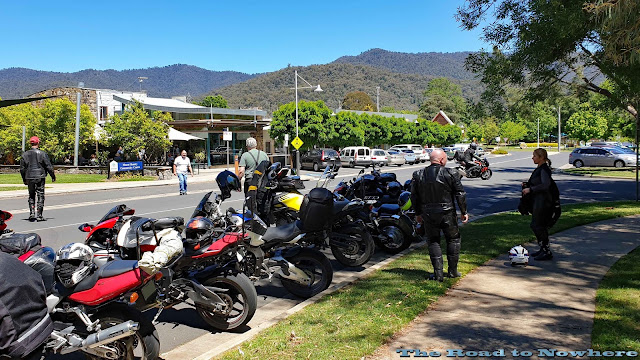 We stopped in Mt Beauty for a spot of lunch, I wasn't really hungry but there wasn't going to be much after this for a couple of hours. I had an excellent Chicken salad roll and a flat white.

Discussion here was on the route from back to Omeo. Stu wanted to return the way we had just come from which was a great ride. I however wanted to ride the Bogong High plains road and a few of the others wanted to visit the Blue Duck Inn on the Omeo Highway. So Stu and Jacko were going to ride with us to Falls Creek then turn around and go back the other way to Omeo with the rest taking the High Plains road.

The ride up to Falls Creek is another fantastic ride, twisting up the mountain for 30kms of bends similar to the Hotham Rd. There were groups of cyclists riding up and down the hill here. One particular cyclist came to grief coming down the hill and had crashed into a rock wall. An ambulance was tending to the injured rider who looked in bad shape. Another cyclist waved his arm in anger when Doug went past him. There was no danger and he was on the centre line with the push bike on the far left. Dougs bike has stock exhaust and isnt loud. Some people are just whingers. 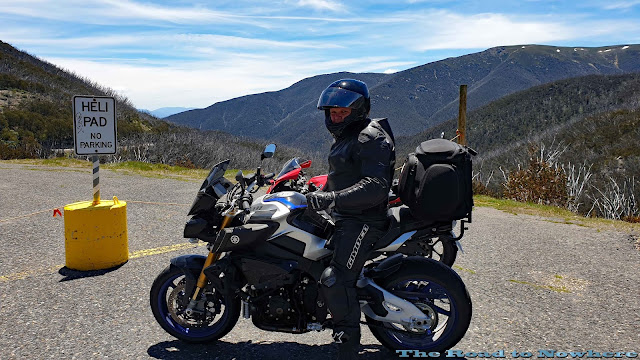 It wasn't long before we were at the top and in Falls Creek. There's not much in Falls, just more empty alpine accommodation. Some nice vistas over the mountain tops. We stopped at the helipad and Stu and Jacko went back down the other way, where the rest of us carried on further. 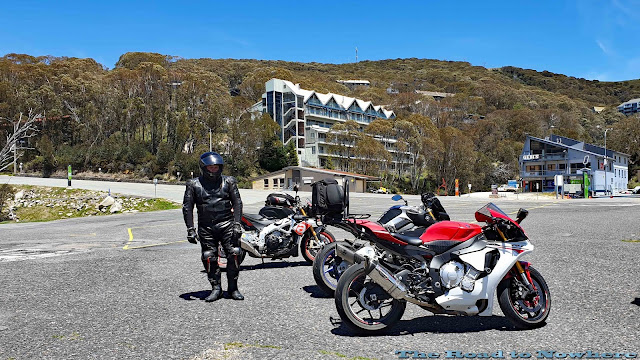 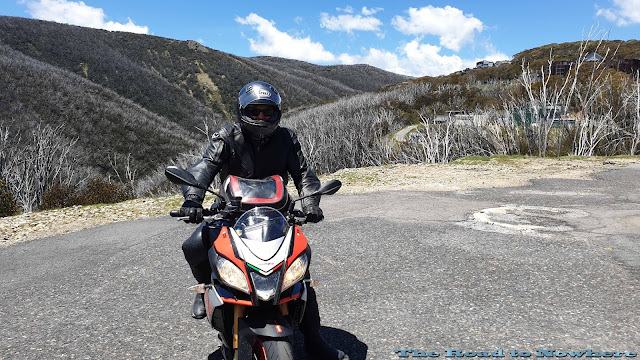 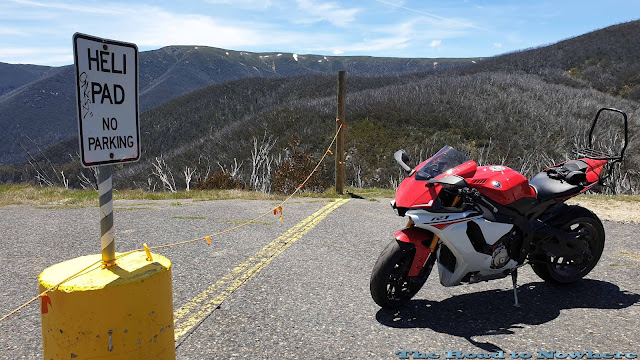 At the top of the hill and just outside Falls Creek is a Dam wall with a huge lake. I stopped for a couple of quick pics here and then continued on. Such a beautiful area up here. I'd like to come down here for a few days with the family. 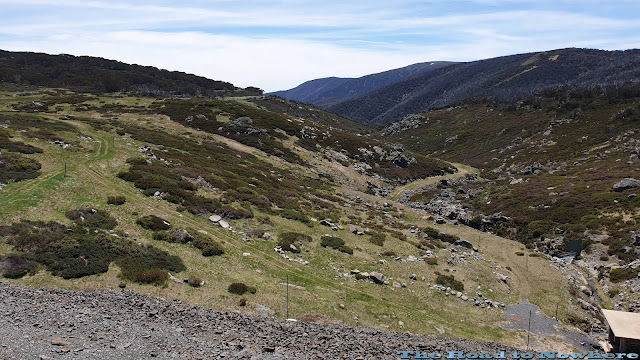 The road makes its way winding around the lake, the water is an amazing deep blue colour which looks inviting but I bet it's freezing cold in there. You wouldn't want to fall in, there would be horrible shrinkage. 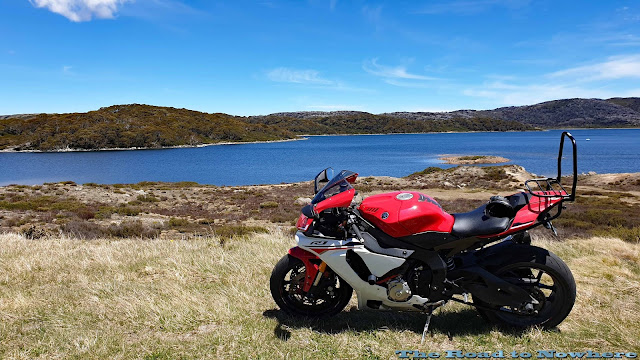 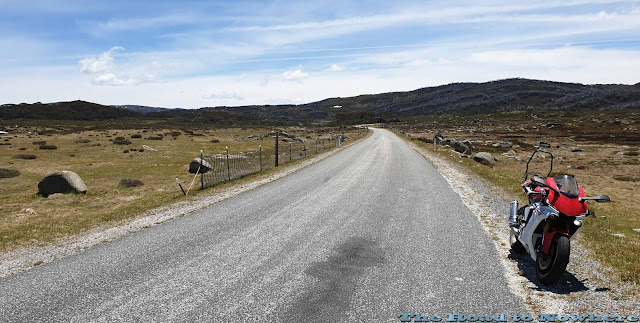 The Bogong High Plains road then winds along the top of the hills here for some time before it starts a winding decent down through the tree lines and down to the Omeo Hwy. Up top the road is open treeless and barren with flat rocky grassland terrain.

The road surface is very deceiving it looks like it's covered in gravel and in some spots it is, making it hard to see but mostly it was fairly clear. I didn't have any slips or slides on anything and I was going at a fair clip. 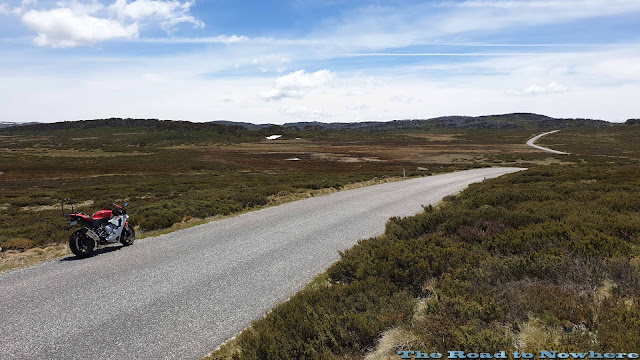 As I'd stopped several times to take photos I got way out behind the group. The group stopped at the highway junction so everyone could catch up and regroup. It was only 11km from here to the Blue Duck Inn. This is a beautiful bit of tarmac following along the Big River. Such stunning country along here. 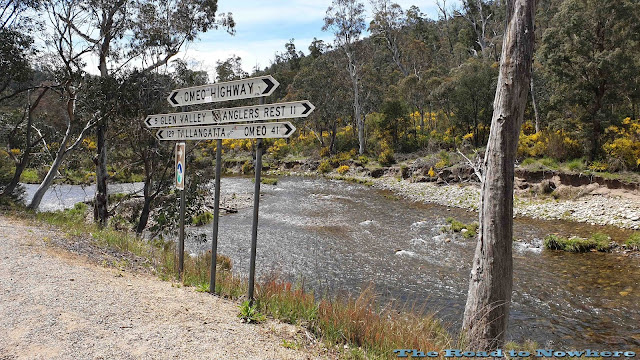 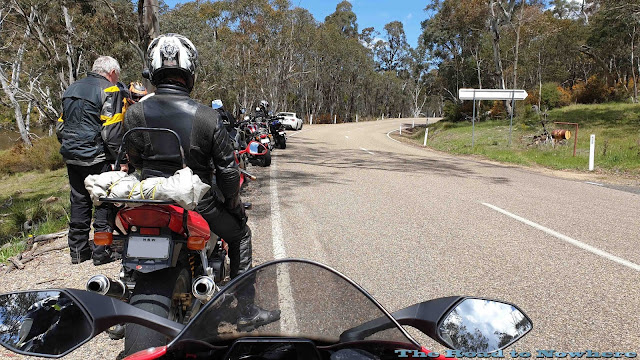 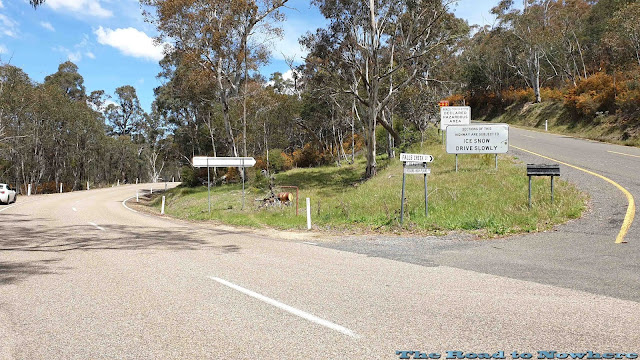 It was only a few minutes later and we were taking a break at the Blue Duck at Anglers Rest. I'd never been in here before as we keep passing through so a stop for an ice cold beer was an excellent choice. What a top little spot this place is too. 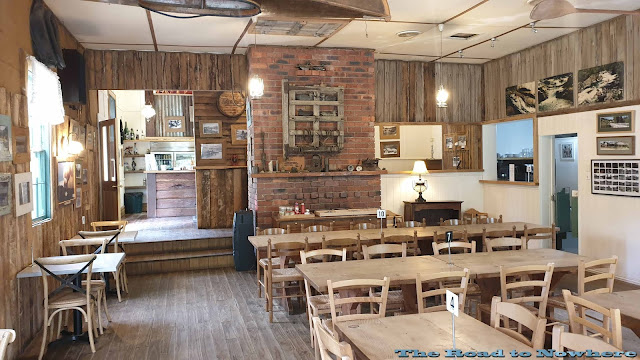 The inside of the pub is small but very well done, clean and tidy with interesting photos on the walls of times long gone by. Out the back is a lush green grass lawn area with the Cobungra river flowing beside the pub. Such crisp clean clear water looks like you could drink straight from the river. 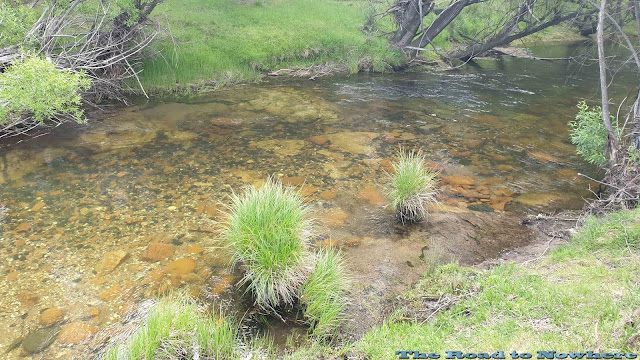 Beers and Nacho's were dispatched in good order as we relaxed under the shade of the verandah out the front. There was another group of bikes here which looked to be from Sydney or central coast and they were doing same as us. We first bumped into them on Mt Hotham going the opposite direction from us. Looks like they were doing a similar loop. 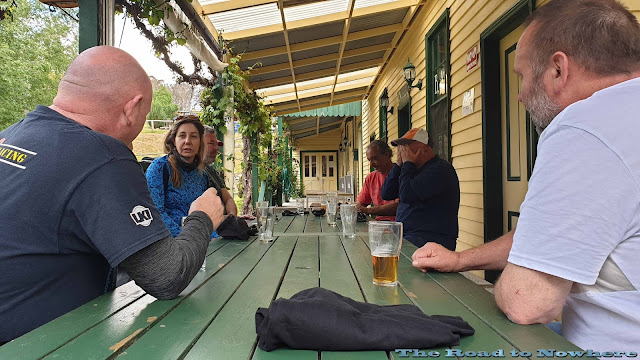 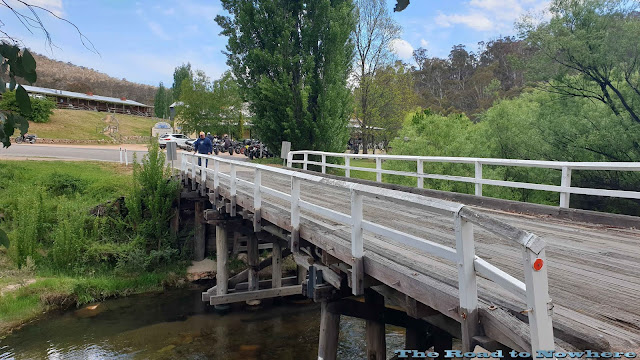 It was only a short 30km ride from Anglers Rest into Omeo but its twisty most of that way but I was taking it easy now, Coming into Omeo there were people and cars everywhere at the showgrounds. Looks like they have a rodeo on today so it going to busy in town tonight.

Stu and Jacko arrived about an hour later. Stu couldn't wait for diner and hooked into a pie from the crazy cow bakery across the road. The pie's there are freakin huge, about half the size of your head. 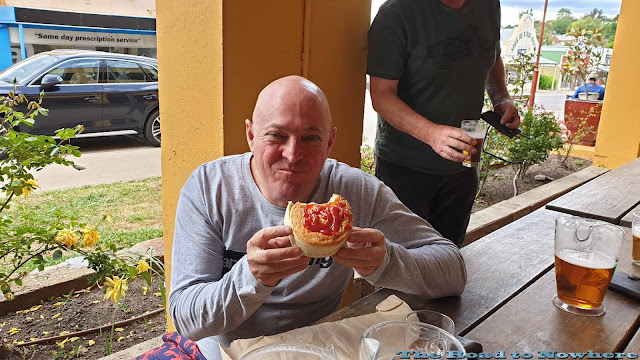 One of the best day's riding in many years riding through some of this country's best biking roads. There's more to come on tomorrows ride.