It was that time of year again where a group of mate's get together for our annual Snowy Mountains and Vic Alpine ride. Being in November it's not really that snowy but that's how we like it, dry twisty mountain roads and this year was no exception.


Now with the bike prepped and ready to go and with 4 days off work I was ready and raring to go. We were to meet at Stu's for a 8am start, no problem as he live's 2 mins from my place.

Our route out of Sydney was to take in a bit of freeway(D'oh) down to the southern highlands(woohoo) and on into Kangaroo Valley, a good twisty bike road only 1.5 hours south of Sydney. The road surface in Kangaroo valley is superb and it feels like a race track. We stopped in the township for coffee and some had pie. I needed the coffee to wake me from my morning comatosed state that I'm  usually in.


Fueling up in Nowra we picked up 3 more of our group before heading out and down into the southern ranges to Nerriga and then on into Tarago. We stopped at the Loaded dog pub where we should have picked up a couple more riders. But we soon found out Doug had a puncture in Goulburn and was at the bike shop getting it looked at. They would meet us in Nelligan for lunch.


So on we headed down to Braidwood and down the Kings Hwy also know as Clyde Mountain. Another excellent motorcycle road, however these days it's quite heavily policed but we were in luck and didn't see any today. Doug and Craig meet us in Nelligen just after we finished lunch so we pushed onwards for fuel in Batemans bay. From here it was only a short squirt down the south coast Princes Hwy.

We stopped in at Narooma for a quick beer at Obriens Hotel. It's the hotel with the million dollar views. It was too soon for me so I opted for a Squash instead, I didn't want to end up in a food/beer coma whilst riding, no siree.

It wasn't long before we were back on the road where we turned off down the Bermagui - Tathra road. This is a great scenic ride with a bit of everything thrown in, twisty mountain, forest road, with coast cliff riding and sand beaches. Such a beautiful area. We stopped in at Tathra Pub as it was rumored to be now open after it burned down about 5 years ago. 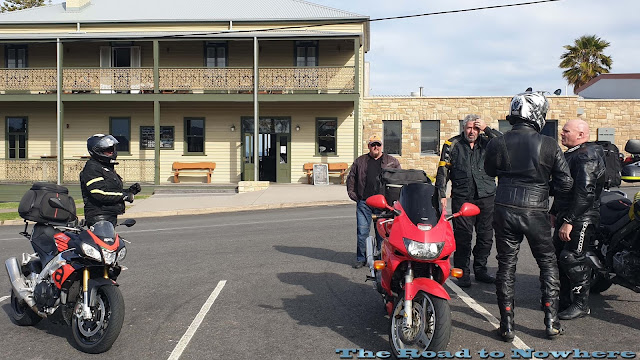 Indeed it was open and what a great little pub it has now become. There is a huge outdoor seating area around the building. There was a micro brewery in behind the bar area and they have accommodation out the back. looks like a place to stay for next year's trip. They have fantastic views out on the deck area and we all had a relaxing beer on the deck.

From Tathra its only a short 20 minute ride to Merimbula where we stayed in the Sea Spray Motel for tonight. It was a nice comfortable motel with very clean well presented rooms at $75 shared. Highly recommended place to stay and very welcoming to Motorcyclists and they cordoned off an area for the bikes to park in. It was a bit of a hike to the pub for dinner though. 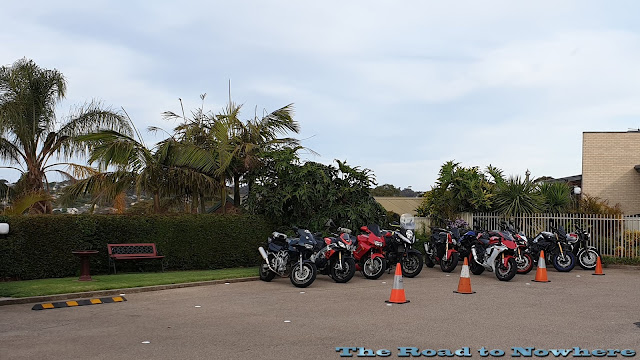 It was a rather conservative night out last night and I was feeling good in the morning, not hung over like a skunk. Geoff wasn't here drinking with us.I wonder if that's the reason? It was an 8am start from the Motel and I must say the beds were so comfortable I didn't want to get up. I noticed that the owners were feeding a flock of Grass parrots under one of their tree's. They really took a shining to Scotty. I thought he was going to get shat on but luck for him he didn't.

From here we made our way down to the waterfront to one of the local cafe's for breakfast. It can be difficult when a group of 11 lob up for breaky but we put 3 tables together and all was good. Gear and helmets were unloaded to the nearest bench which made an interesting photo. The helmet's and gear is as varied as their owners. 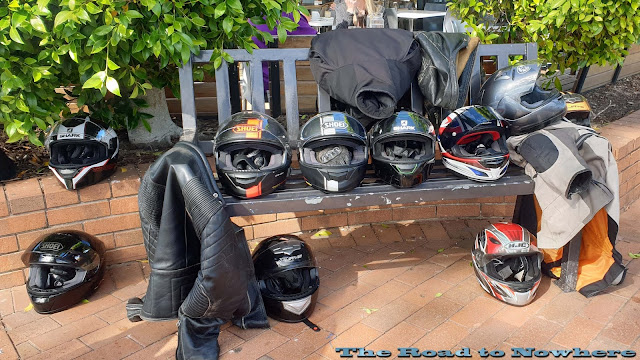 From here we fueled up and hit the road out to Candelo then onto Wyndham. I caught up to Scotty in his 86 along the twisty mountain section through the forest. He wasn't mucking around either and can really drive that 86 well. I large branch flew out from underneath the 86 across my path and I had to swerve onto the other side of the road to avoid it. It's much better to follow a bike than have a car block your view, so I got in front after that so I could see better.

We stopped briefly so everyone could catch up and go the right direction and to make sure everyone got through ok. The Mt Darragh road is quite twisty and I had good fun hammering through there with Brett on the MT-10 hot on my tail. I was to follow him a few days later and the sound of dueling crossplane's is absolutely brilliant.

We arrived in Bombala and there were a few bikes around, they were having the Bombala bike show on this weekend. That could be interesting. A quick fuel stop and we were off to Delegate and down the Bonang road. A few people were Bonang virgins and popped their Bonang cherries today. Needless to say they didn't think they could have that much fun with their clothes on.

The Bonang was a little bit rough in places making it hard to set a good pace as you never quite know what to expect around the next corner, but it was mostly in good nick. I really like some sections of the Bonang with its banked curves which really help you hook into a bend. The bottom section was in top shape and we had a blast  along here with Doug and Scotty in the 86. We stopped in Orbost for fuel and lunch at the bakery and waited for everyone to catch up.

From here we took another cracking back road out to Buchan. I lead through here and it wasn't long before a wallaby had jumped out across the road in front of me which wasn't to be unexpected on this narrow forested road. Not long after 2 Galah's few out of the grass at the side of the road. I didn't think about that much until about 20 more flew out after them and all I could see was a wall of white birds. I ducked behind the screen. I didn't hear any birds thudding into me or the bike so continued along at pace. Doug however rode through a cloud of feathers that had come out of one of the birds I'd hit. 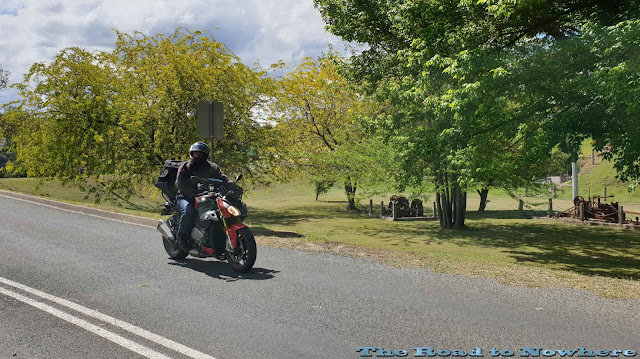 We topped up our tanks in Bruthen before heading up the Great Alpine road to Swifts Creek. This part of the ride is always enjoyable as the road flows along next to the Tambo river and is a cracking ride with a wide road with pretty good surface which flows really well.

Another stop in Swifts Creek to wait for the other as we were turning off here. When they arrived we kept going, I'm not sure how it happened but only about half of us turned off and the others went straight ahead to Omeo. The back road is more interesting option being much more twisty and scenic. 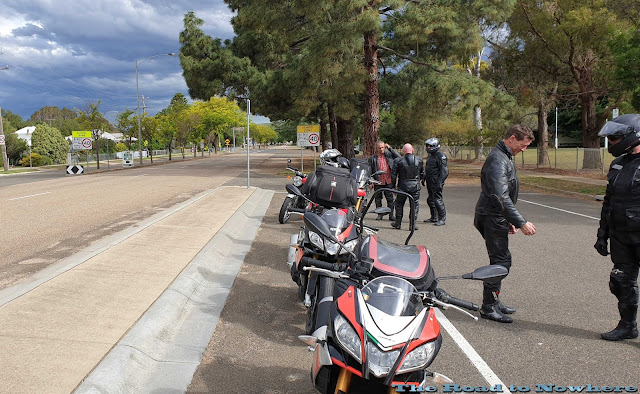 It's only a short ride from Swift Creek into Omeo but it is one cracking good bit of tarmac and it wasn't long before we arrived at the Golden Age hotel, which was to be our accommodation for the next 2 nights. There were a few jugs of beer consumed but it didn't take Jacko long before he got stuck into a jug of Captain Morgans. Needless to say we all had a good night, it's been a long time since I've played pool......

Today's map. At least 420 kms of twisty bends on today's ride, that's why I love the Victorian High country so much. I wonder if I could move down to Bright or that area to live the slow country lifestyle again. You can ride all day here and it's all bends where as in NSW you can ride all day and only do 50 - 100 kms of bends.