Today was our last day of riding as I had to fly home today. But that didn't mean the fun was over far from it. We packed our gear ready to go then headed out for breakfast then fueled up before leaving town. The route plan was a fairly short one today, but involved a lot of twisties on the way back to Flyboys place.

First up was the ride out of Kyogle up to Uki on the Kyogle Rd - Uki Rd. The road just out of town rises up and over 2 mountain passes and is an awesome ride. Some bits can be a bit rough but it was a lot of fun.

We stopped at a look out over the valley below, the mountain that was out in front of us was covered in cloud. The road here had recently had new chip seal put down and still had a bit of gravel on it, just enough to give you that uneasy feeling all though there wasn't any slips or slides.

The ride into Uki was quite enjoyable, lots of hills, rain forest, and the Tweed rivers flows along next to the road all the while the road sweeps along through valleys and over hills. The only downer was that the council was out doing maintenance on the road in a few spots leaving gravel on a few corners.

Turning left before Murwillumbah we headed down the the Tyalgum road another nice flowing road through beautiful green countryside.

The road took us up the Numinbah Valley with a steep ascent we went up the range to the NSW-QLD border crossing where stopped for some pictures.

There were 4 bikes parked in the lookout bay so we pulled in. We spoke to one of the guys that were out on a day loop ride from Tweed heads. We took a few obligatory photos before getting moving again.

Flyboy then lead us down towards the Hinze dam before turning off and up and over Pine Creek road to meet up with the Springbrook Rd. Turning down the Springbrook road the surface here was hot mixed race track smooth surface. It was a little damp due to passing showers but it was a fun bit of road. Near the bottom we turned around and came back up the pass and up and over to the Hinze dam and back up the road to Advancetown.

Ahead we turned up the Beechmont road stopping at the beginning of the road and looking back over the Gold Coast. It must have only been 3-4 km in a straight line, you could see all the high rise buildings in the distance. It was a weird feeling standing in the bush with no one around but being able to see one of Australia's big cities in the distance.

The next 4-5 kms along here reminded me of the Oxley highway, it was a good bit of road 35-45 km corners but it was over too soon(5k ish) and it then came out into a dense group of houses along the roadside.

Soon we came along to a cafe which overlooked a paragliders take off point, which went out over this huge valley. You could see all the way down to Mt Warning in NSW. A beautiful spot to stop. There we a few bikes stopped here. I bet this is a popular spot during the weekend.

We ordered a iced coffee and shared a bowl of wedges here whilst we watched the paragliders flying over the valley and bikes passing by. We spoke a couple of local bike riders. One had an immaculate 2010 R1 in the matt black and Gold.

We continued around through beechmont and towards Canungra where the military base is. We stopped in along the road next to an entry point to the training area. With the bikes off we could here explosions in the forest behind us. They were blowing something up today. 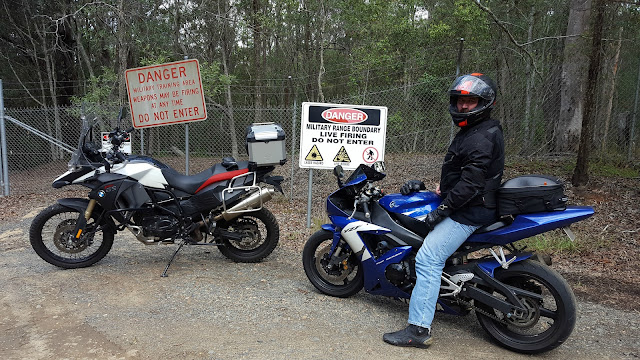 We turned up the Tambourine Mountain Road and went up through some of the Gold Coast Hinterlands most popular tourist spots. We weren't interested in stopping to look at any of this and only stopped one more time at one of the look outs to the west. After this went back down the mountain to Tambourine and back up into Brisbane.

So after 4 days of blood, sweat and beers we managed to rack up 1635 kms over some of southern Queensland's best and twistiest bike roads. No bikes were harmed during the making of this blog post and no licenses were tarnished, but we sure did manage to have a great time.

What are my thoughts on the roads up this way? Well.......To be brutally honest I didn't rate the roads as being some of the best I've ever ridden. I don't mean this to sound negative because we had a ball. Sure there were little pockets of brilliance here and there but as a whole the roads just don't compare to the likes of the roads in the NSW Snowy mountains or Victorian High country, I guess I've been spoiled by the likes of the Omeo Hwy, Jamieson Rd, Bonang and Snowy Mountains Hwy.

There's no doubt that the scenery here is quite spectacular including the whole Scenic Rim area which I quite enjoyed. The twisty bits are never long enough with only a few km's of bends before it turns back into sweeping corners and the road surfaces on a lot of these roads leaves much to be desired. Your never far from civilization which means there are always cars blocking your flow along the road and messing up your rhythm. Again some pockets of good hot mixed sections but in between it was a mix of the good, the bad and the downright ugly and some are too narrow to be of any real fun (Tooloom rd). The best thing about these roads is there are not many straight sections and relative short distances to the next road, unlike NSW which can have big distances to the next bike road. Would I come back and ride them, sure why not but not anytime soon there are much better roads to be ridden.

Special thanks to my older Bro for letting trusting me with his R1 for 4 days of riding through unknown roads. It's been a long time since we had ridden together and it was a great time for memories of past rides. It was a blast bro and maybe we can do it down in the Vic high country one day. Thank you very much for making this happen.