For the last 10 years or more my older brother has been harassing me to ride up to his place in Brisvegas so we could ride some of South Eastern Queensland finest biking roads. The thought of spending 2 days on the R1 just getting there, then 2 days return plus 4 days there just wasn't that appealing to be honest.

Flyboy to the rescue it was. His plan was simple. Fly me up Friday night on el cheapo staff travel and then I ride his R1 whilst he rides his newly acquired beemer. Problem solved. So it was, and there was beers and everyone was content. 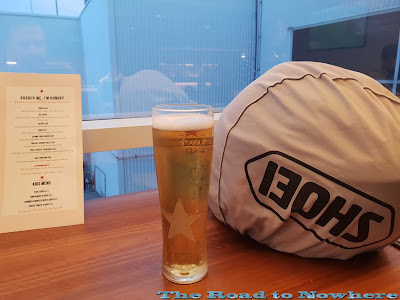 I was sent some route plans through via email to look at, which I really didn't pay any attention to. Why would I? I have a local tour guide and I don't know the area anyway.

We set off late around 10.30am and headed for Mt Nebo and Mt Glorious. Brisbane's equivalent to Sydney's Old Road aware of the fact it will probably be highly policed. Showers were predicted for today 90% chance. Literally two minutes down the road the heavens opened up and dumped on us, then strangely stopped as quickly as it started. At least it wasn't cold here in the subtropics like it is back home, the water just streamed through my mesh jacket. That was to be the theme for the next 2 days, with both dry and damp roads.

My tour guide made a navigation error on the way and robbed me of the chance of losing my license on Mt Nebo and instead brought us straight up Mt Glorious. The road itself was good, a little bumpy in places and a few off camber corners over hills but fun nonetheless. 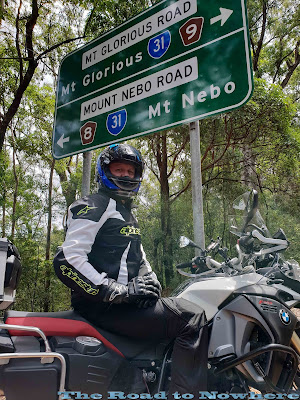 I was surprised that we got a parking spot right out the front of the Mt Glorious cafe and there were no other bikes parked there. We had fish and chips and coffee for lunch, the fish and chips were fantastic.  A few more bikes turned up after we ordered. Maybe the weather had kept them away. It's a nice little cafe better than the one's on the Old Road. 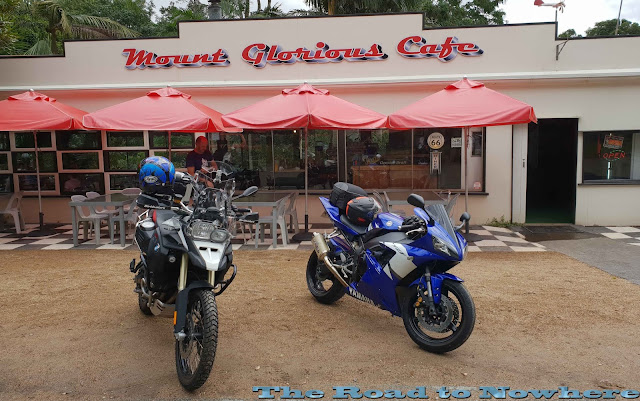 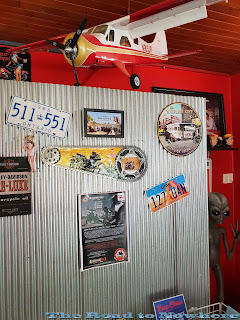 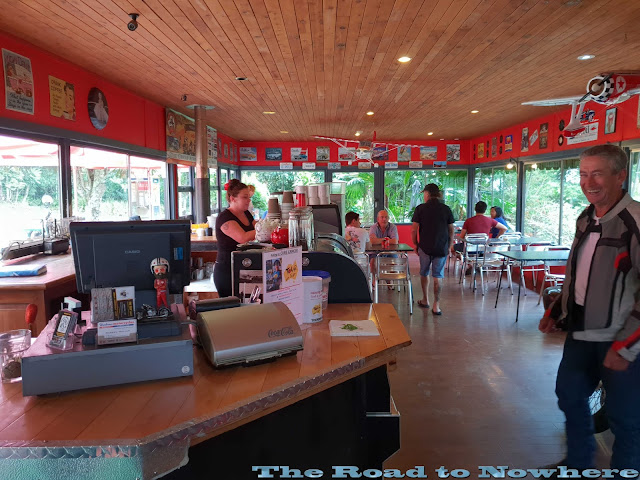 After lunch we rode back down towards Brisbane but then turned northwards to head up the Mt Mee road. The roads in this area a quite flowing, as Barry Sheene used to say 'Uphill down Dale'. 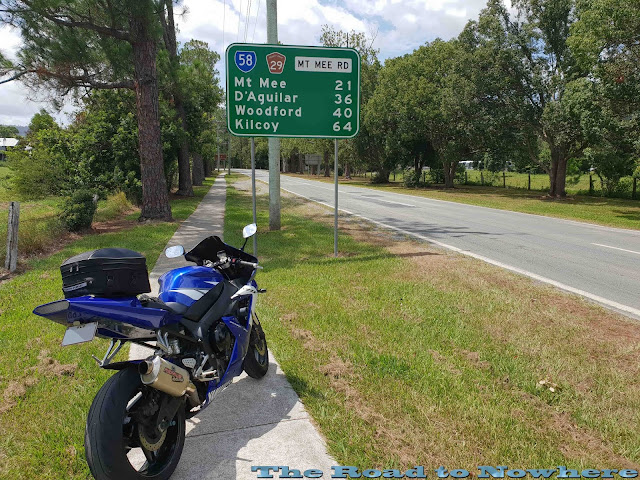 Mt Mee road was a fun bit of road with some twisty bits and spectacular scenery. It's pretty obvious why it's so green here, it must rain quite a lot.

Onwards we went and I was quite enjoying the fact of not knowing where I was or where I was going. Seemed unimportant to me actually and I didn't really care, as long as the roads stay hilly and twisty I didn't mind at all and I had a tour guide to the stars of course.

We came upon another lookout which we stopped to take in the views which weren't so spectacular today due to haze and low cloud. The glasshouse mountains where out there in the distance somewhere. 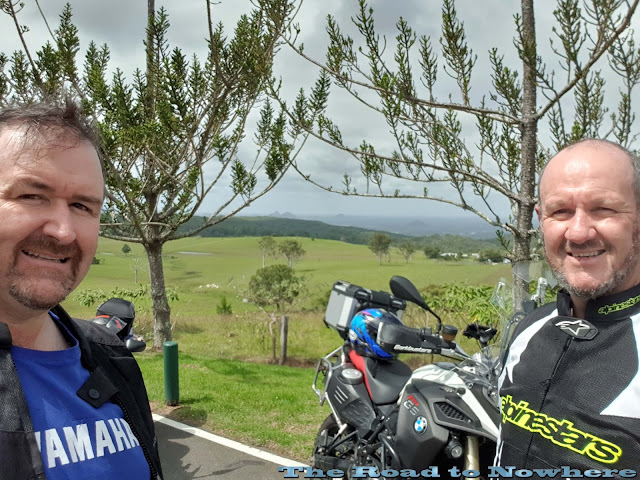 Setting off we continued along the road. My tour guide pulled over in the shade of a tree. 'Whats up' says I. 'Dont know where I'm going next' says my expert tour guide whilst he fumbled with his smart phone. Mmmmmm

It gave me a chance for a break and take some snaps for the next few minutes whilst the err gps re-acquired his satellites.....

We rode up and down one particular section a couple of times and I'm sure we went around in circles at least once. Not sure if this was deliberate or he was lost, I can't tell. Flyboy turned down a road known as the 'postmans track'. It was a very narrow, bumpy, steep and twisty bit of road in the middle of nowhere. Not sure a postie bike would make it up that steep hill. 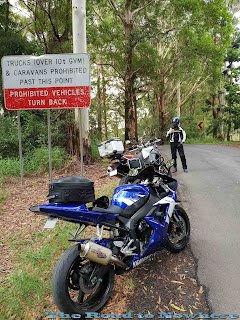 With all the little stops for pics along the way it was getting late in the arvo. We stopped in another little town to reacquire satellites when it started to rain on us. Lucky it was only 10 minutes to our stop for the night, the Pomona hotel. By the time we got there we got a hosing though and I was soaked through my mesh jacket and my jeans. Then it stopped raining just after we stopped out the back of pub. Fantastic.

A quick refresh and we were at the bar for drinks. The Pomona hotel staff need a little education in customer service because it was non existent. Told us we had to order food by 6:30 or it will be closed, it was 6:15. The beers on tap tasted funny like they hadn't cleaned their lines. The bar was closed at 8pm all on a Saturday night and kicked us out, sold us some takeaways then told us we couldn't drink them on the premise . Which we promptly ignored, where else were we going to drink them, on the street. Their attitude towards customer service was poor. We will stay elsewhere next time, is it any wonder they had bugger all customers.


A good days riding despite the roads being wet in places. Most of the ride was all twisty roads with not much in the way of straight road riding. Looking forward to tomorrow now.