Pomona was a bit of a dive so we decided on getting an earlyish start and finding breakfast elsewhere. We took the Pomona - Kin Kin road. I knew we were heading out on a bikers road when we went to turn onto the road and a group of 10+ bikes roared past in front of us down the same road.

The road was damp as it rained overnight, we came into quite a few twisty bits with a series of 40kmh curves which we took at a ginger pace due to being damp but were pushing the other riders to go faster.

We were soon in Kin Kin by 8:20am and found a place for breakfast. There must have been a couple hundred bikes pass through here whilst we were stuffing our faces with some poached eggs and avocado. Fantastic breakfast stop, unfortunately a few more showers passed by wetting the roads again. 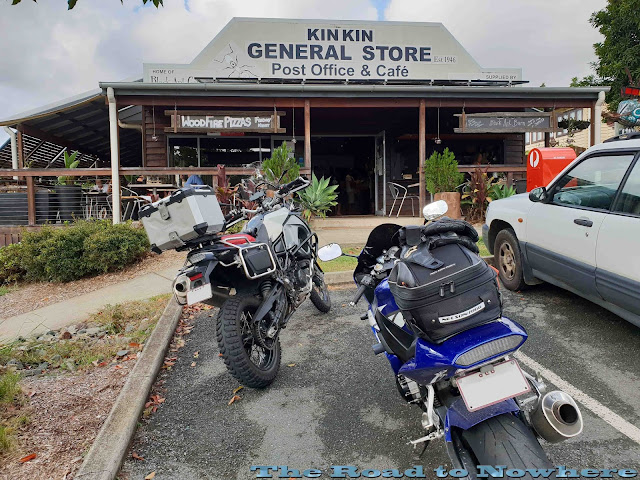 After breakfast we headed back down to Cooran and through some back roads just out of Kenilworth where we turned onto the Obi One Kenobi Road as I called it. Its real name is the Obi Obi road. I quite enjoyed this road as it was another flowing road with sweeping corners up over hills with views over valleys and mountains in the background. This road is better going up as the road splits into 2 one way sections going up the mountain, the one going up was tar which was the direction we were going. The other way going back down is dirt, not so much fun when wet and on an R1 and steep.

We stopped in Mapleton for fuel where Flyboy had a message from one of his mates, who were were meeting in Maleny. No time to waste, as we would be having coffee there in 20 Min's. Riding the road down the ridge line was interesting views out over the coast, there wasn't a great deal of traffic this morning probably due to the inclement weather but it had that touristy feel that any sunny Sunday and the place would have been jam packed.

Stopping at one lookout along the ridge we decided that someones driveway was a better lookout than the real one. We took a couple of snaps but quickly departed as a fast moving shower was coming straight across the range so we wanted to stay ahead of it.

We arrived in Maleny and Matt was waiting for us. We stopped for coffee and a chat, whilst several rain showers passed by. After about an hour we said our goodbyes and headed out the Maleny Stanley river road where we saw a speed camera trap and a Highway patrol working the road. Lucky it was damp and we were actually going 5kmh under the limit lol. Bikes 1, Hwy Patrol 0. 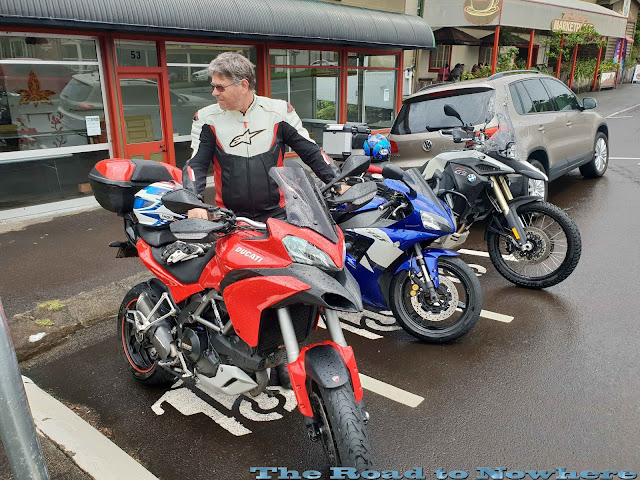 We stopped along here as you could see through the haze and cloud in the distance to the back of the glasshouse mountains. It would be a pretty sight on a clear day with blue skies.

We continued on our way to Kilcoy were I got fuel and we waited again at the BP for another one of Flyboys school mates who was going to join us for the rest of today's ride. Hodgo turned up and I hadn't seen him since high school, either had my brother.

We got underway as we had a bit of riding to do before our destination for tonight. We headed out the road around the back of Lake Wivenhoe and past Sommerset Dam. We came upon the back of about a dozen bikes. I really enjoyed riding along this section of road, with views of the lake to the left, hills to the right and twisty bits in between. It was so much fun we didn't bother to stop to take any photos, I regret that now writing the blog but not at the time. There further south we rode the dryer the landscape became. The lush green countryside was replaced with harsh brown barren looking grassland. Reminds me of home in Central NSW in summer. We came down past Amberly air force base then down to Mt Alford where we stopped at the Scenic Rim Brewery for a refreshing Pale Ale and Hodgo grabbed something to eat. 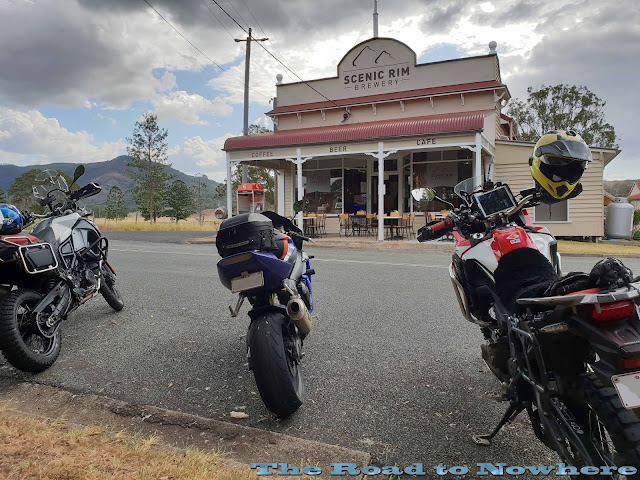 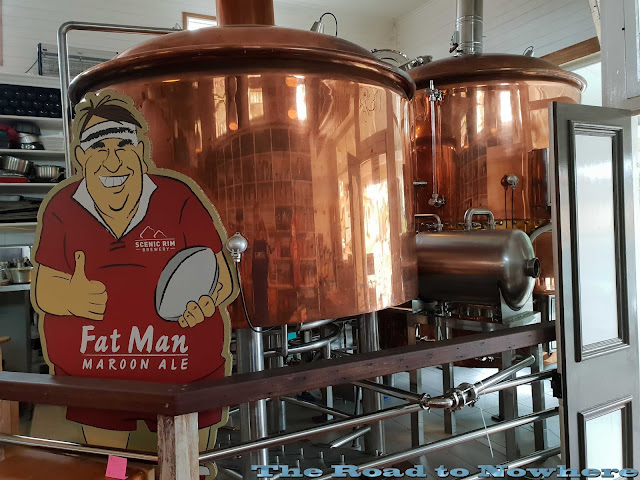 After a short 20min break at one of gods gift to mankind we pressed on as it was getting late in the afternoon. We rode down the Mt Lindsey highway. This bit of road is both good and bad. There's no doubt its a great bit of twisties, but man the surface here can be quite shite in places. Then you get to the NSW side and the surface becomes a smooth hotmix section which is a lot of fun.

We stopped for the obligatory photo in front of Mt Lindsey with the bikes. Hodgo doesn't know to look and smile when his photo is being taken.

From here it was a quick blast down to Woodenbong and then on into Urbenville and to the Crown Hotel for the night. With a motorcycle parked on the roof this has to be a motorcycle friendly establishment doesn't it. 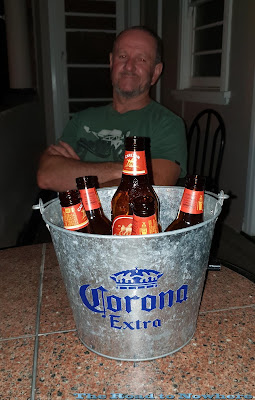 I wasn't wrong about thinking that. The people running the place couldn't have been more accommodating, unlike the Pomona hotel the previous night. Park our bikes around the back under cover. Dumping our gear in the room I saw the beds hadn't been made yet. We mentioned it to the barmaid, she apologized profusely, gave us new rooms and a free beer for the inconvenience. Then they brought us out a rack of freshly cooked beef ribs to try out that had been slow cooked. The meat was so tender and just fell off the bone and melted in your mouth. We ordered more beers and 2 pizzas between the three of us. Hodgo had to leave just after 8pm for the ride back into Brisbane. It was excellent chatting with him and learning of his tour around the US, Canada and Yukon by bike.

I can highly recommend the Crown Hotel as a good biker friendly place to stay. Typical pub rooms, nothing flash there, but they have been doing up the bathrooms, one was brand new.

We retired to the balcony after closing with some roadies. It sure was quiet out there on a Sunday night, you could almost hear the crickets over the banjos playing....