Hooray for an earlyish night and therefore the resulting lack of a hangover, cheering. We hit up one of the local cafe's for a early breakfast and were underway just after 9am after fueling up. Today's route was going to take us up the Snowy Mountains highway and then turn off through the back roads to Candelo, Wyndham and further on to Bombala.

I keep forgetting how good this road through Candelo is. It has bits of everything from sweeping hillside scenery to thick forests with some very twisty blacktop and everything in between. 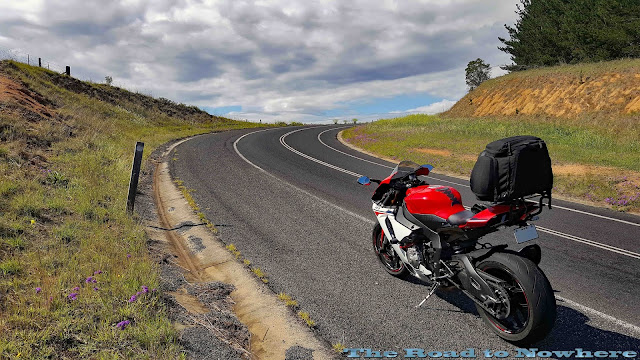 We took a short break in Wyndham for everyone to regroup and then continue our way to Bombala for fuel and coffee. It was too early for lunch yet.

There were a few bikes travelling through Wyndham on their way to Bombala, including a bunch of postie bikes. The Bombala bike show was on this weekend so we found out, but we didn't have time to hang around to check it out which was a bit of a shame. Stopping in Bombala there were a few bikes around the streets, not as many as I thought there would be though, but is was still early about 10:30am when we stopped for coffee.

It was here the group discussion on the route plan for the next bit was a bone of contention. Dave and Brett with their brand new toys - Aprilia Tuono and MT-10 didn't want to get them dirty on the 11km of dirt road on the Bonang Highway. So we ended up splitting the group, four of us including myself went via the Bonang Hwy and 4 went via Cann Valley way and the main Highway. I know who is going to have more fun...... 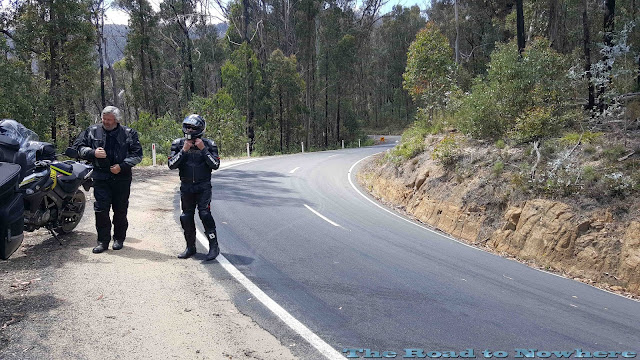 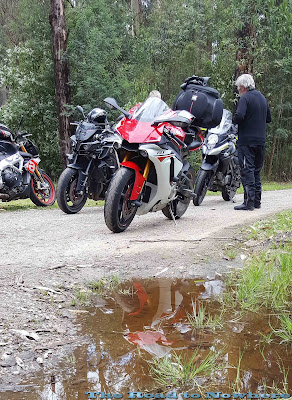 It didn't seem to take long at all from the dirt section to the fireplace rest stop where we stopped for another chat. I don't think I've ever seen the Bonang in better condition and the temperature for today was spot on too. It wasn't hot or cold which made for perfect riding. The banked corners on the top section really help you attack the curves.

The  Bonang must rate right up there as one of the best roads in Australia for riding. 105km's of bends with over 1080 curves in that distance.

I lead most of the way from the dirt section down to Orbost with Stu in Hot pursuit, I did have to slow down a few times to give him a sporting chance!!!

Arriving at the end of the road I decided I wanted a picture at the 105km sign, luckily Craig motored by just as I was about to take the pic so I got the two bikes.

We stopped in Orbost for fuel and the other four soft cocks were waiting for us at the bakery next door having a spot of lunch with their pristine condition bikes and chicken strips. We quickly fueled up ready to go whilst Geoff inhaled a sausage roll. I wasn't hungry so I went with just some water to rehydrate.

We decided on the scenic route out of Orbost to Buchan(pronounced Buckun) which keeps us off the main highway, as well as being a fantastic twisty bit of remote rural countryside with some stunning views, you might say it was Buchan fantastic. I did crap myself at one point when I came around a bend at speed and three sheep were standing in the centre of the road. A beep from the horn and nothing, a blip of the R1 throttle and that exhaust note scared the bejesus out of them and off the road.

We stopped in Bruthen for a top up of fuel before heading up towards Omeo. The section of road that runs along the Tambo river is another favourite of mine from years ago when we used to ride to motogp. It's fantastic to see a freight train of bikes insync with each other flicking from left to right laying it over into the long bends that run around the river. Simply magic stuff.

Getting into Omeo late in the afternoon we parked the bikes up under the awning and settled in for a few quick beers on the front lawn. It was fantastic basking in the evening sun having a cold one with da boys talking everything bikes. I like staying in Omeo, in every direction is a winding road, the meals are good and they have free cooked breakfast all for $50, bargin. Another 502km for today and mostly all twisty road. It doesn't get much better than that. 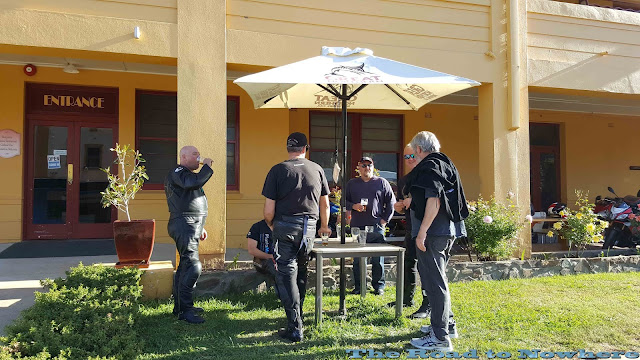