We had woken up and the rain had stopped and the roads were drying out quickly. Today we just grabbed a quick maccas breaky so we could get going quickly. Heading south from Taihape the destination for today was to be Palmerston North which is only 110kms away, however I had a 440km twisty little back route devised with the help of Andrew from the famous Bandit Rider Blog. 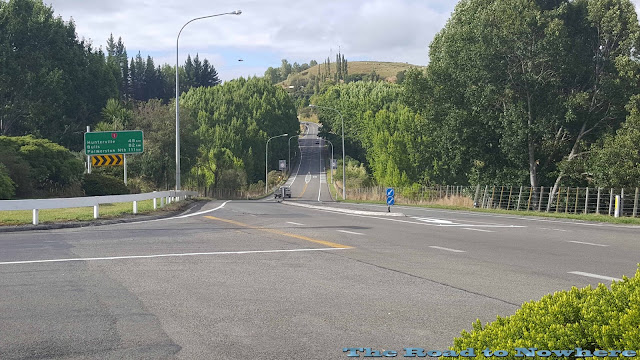 Turning off at Mangaweka we took the Manawatu Scenic route which is another excellent biking road and is quite easy to follow, when we first turned onto the road I thought we must be on the wrong road as it turned to dirt straight away. Er what happened? Turns out it was freshly tarred it looked like dirt but wasn't. There are a couple of turn offs along this route to be wary off though otherwise you could get lost. The signage is small and hard to notice in places. Much like the southern scenic route on the Catlins - South Island it is sign posted with a scenic route sign as follows.

The road is quite winding in sections and with sweeping curves over hills and most of it has no corner advisory signs so you need to take it easy. Next stop was in Ashurst and we then turned up Saddle Rd over to Woodville, there were some good views from up this twisting hill and at the top we found there were hundreds of wind farm generators. From the hill we could see our destination of Palmerston North it was probably only 15km away. 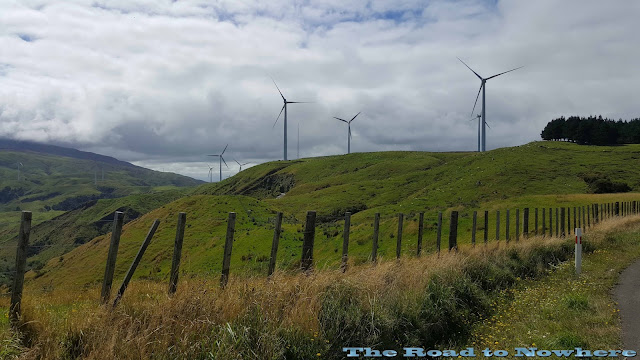 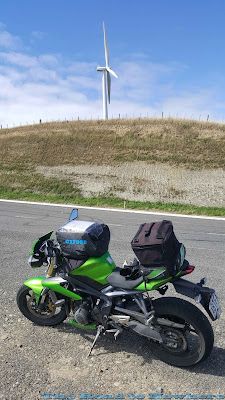 I stopped in for a quick photo at the wind farm lookout whilst the others continued along the road below, I saw them passing by but I don't think any of them saw me standing up at the look out, there could have been a bus load of swedish bikini girls with their tits out and I don't think they would have seen it!.

There were literally hundreds of the things scattered all over the hills here so obviously this must be a really windy area, luckily not today and it was our first day without rain. 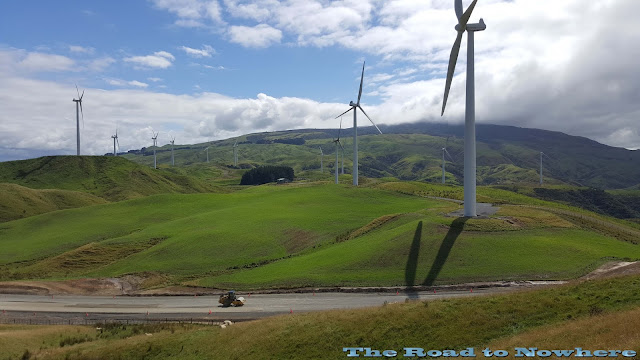 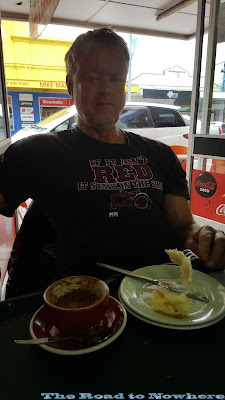 We continued on towards Waipukurau where we had to pull over to put our wets back on as more rain approached us. The road from Woodville up to Waipukurau was mostly just straight highway and nothing much in the way of fun, it was pretty heavily trafficked too as it was the main road to Napier Hastings. The rain only lasted for about 5 minutes and then was dry again so the wets came back off at lunch. Annoying putting this stuff on and off in a short space of time.

Stopping in at Waipukurau for a spot of lunch at the bakery I filled up with a chicken salad roll which was brilliant. I noticed they had won awards for their pies and Geoff mentioned that the pies were really good.

Returning to the bikes Rick was looking at the suspension on the bikes and then pulled out his tyre pressure gauge to check the pressures as they had cooled down over lunch. All the bikes tyre pressures were found to be at 42F and 45R. No wonder the bikes were sliding around so much in the wet the pressure was too high and the tyres can't get enough heat into them. Obviously done by the bike hire shop to increase the tyre life. We let the pressures down to recommended levels 36F & 42R. I'm really starting to wonder about this bike hire place. 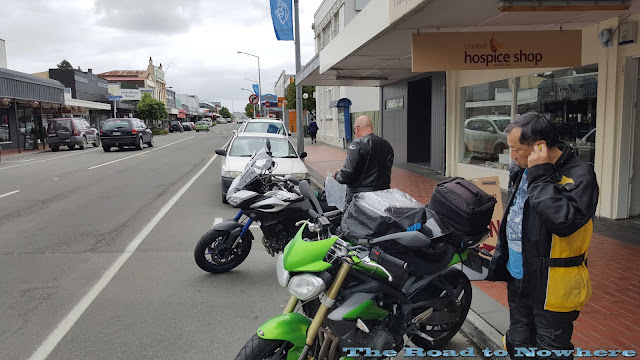 Leaving Waipukurau and heading to another equally unpronounceable maori named town we stopped at this sign as I hadn't seen any signs for a while. This didn't look right and then when we went another 2 or 3 kms up the road and noticed a beach on our right hand side we stopped and turned around and headed back again. If anything the beach should have been on our left side not the right. There was a small tiny sign in the middle of a curve just before Porangahau saying Wimbledon which was the way we were supposed to be going. Signage in NZ is quite poor and compound that with the unpronounceable Maori names and not being able to spell the name of the town makes navigation without a gps quite difficult.

The road to Wimbledon has nice sweeping curves over hills through farming country. We came upon the place with the longest name in the world. Later on we asked a couple of maori people how to say it and even they were having trouble. Whathafukdoesitsayinenglishpleas? 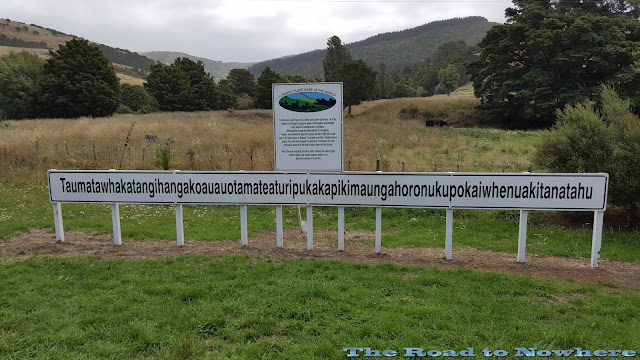 Stopping in Wimbledon Geoff stalled the Tiger and it then refused to start. Fuck! and we are in the middle of nowhere with no phone reception. As we are unsure what's wrong the batteries were swapped out of the Street triple and the tiger. The Tiger fired back up again and we made for Dannevirke and then straight to Palmerston North to go to Supercheap auto to see if we could get the battery tested. We were thinking its not being charged but can't be sure in the middle of nowhere with no tools.


The Tavern was closed today, a note on the door said they were taking the owner to the Doctors and a local pulled up in a ute and confirmed the proprietor wasn't well. Geoff noticed they guy in the ute had a couple of guns in the back of his ute, yep we are in banjo country here.

The road into Dannevirke from Wimbledon was a fantastic little ride with all sorts of twisty bends, I came around a corner and there were sheep standing on the side of the road which made the heart beat a little faster as I wasn't sure if they were going to dart out in front of me, luckily for me they didn't because that would have ended badly.

The ride back into Palmerston North was interesting just out of town where it went through Manawatu Gorge, which was a fun bit of road but far with too much traffic on it. The road twists it way around the river here but didn't have time to stop and take snaps as we needed to get to supercheap before they closed at 5:30pm.

Riding into Palmy I was keeping an eye peeled for a silver connie but couldn't see one, little did I know Andrew from the Bandit rider blog was waiting at a set of traffic lights in his car. We went straight to supercheap. The battery tested ok, so we swapped them back into the respective bikes. So it must have some other issues. Andrew turned up and we said hello and a bit of a chat about what was happening. He wasn't surprised in the slightest that a triumph wouldn't start and we all laughed about it. He suggested we go to his house where he has tools and a multi meter to do some testing. If he knew what he was in for I'm sure he would have never offered!

I forgot to take any photos from this point as we were all busy trying to find out what was wrong with the Tiger. The side stand switch was checked and metered, clutch switch checked and all the electricals pulled out and examined. There was some cussing. Relays and fuses were checked and hammers swung into action. It was charging at 14V when it was running. Then some more cussing. After an hour or more of stuffing around and Geoff was acting like a hysterical old woman we thought we were going to have to slap some sense into him. Finally we decided that it wasn't going to start, admit defeat and we'd have to unpack the tiger. It was here Geoff pulled out Ricks camera bag, that Rick had conveniently left unzipped in the top box. A camera and two lenses went crashing onto the concrete. Then there was a bucket load more cussing. Could anything else possibly go wrong? I'm sure Andrew's neighbours must have thought a bikie gang had moved in next door!

We had to give up and ring the bike hire place in the end. His response was somewhat underwhelming to say the least, stating "yeah it does that sometimes". Then he said "Try it again for me". No shit it started straight away and without any hint of the slow cranking or the no cranking it was exhibiting before. So Geoff tried it 3 more times and it fired every time. I think this sent Geoff over the edge into irrational thought cursing and swearing and saying he was going to sell his triumph when he got home. Geoff said "This bike is cursed, It's the Black Pearl, arrrrrrrrrgh" RE: Pirates of the Caribbean film and from that point on she was called 'The Black Pearl'. Rolling out of Andrews place Geoff almost smashed off his down pipe with one of the panniers. I had to shake my head, it's a wonder Andrew didn't tell us to F*ck off right then and never come back. Yep I guess it can get worse. Some people should not be allowed to ride bikes with panniers. Yes Geoff you're one of them, you crashed into each of our bikes and a house for f*ck sake!

I invited Andrew to dinner to which he accepted, not sure why he wanted to hang around a bunch of completely insane lunatics like us but it was good to sit down and chat with him about bikes, riding in NZ and everything else in general. Similarly to Geoff and Jules previously we hit it off pretty good and it felt like I'd know Andrew for a long time when the fact was we'd never met before. It would have been good to get a ride in with him if circumstances had been a little different.

I'd mentioned how many times we got lost already and he laughed and asked us where are we going tomorrow. I showed him our route and he quickly said "well you're going to get lost again unless you turn here"(shows me a pic of another tiny little road sign on facebook). Yup thanks mate I'm sure we would have missed that one too but we didn't thanks to your forewarning. Cheers Bud!

It was fantastic to meet you Andrew, another 'highlight' of the tour there's no doubt. A big 'Thank you' from all the guys for letting us use your tools and was great to catch up and just chat with other like minded bike riders. As I said if you're ever over here let us know and we'll catch up. 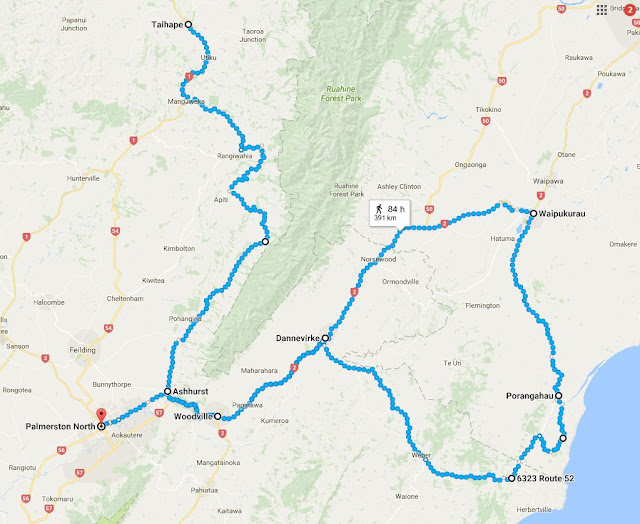