Todays ride was really just the short 300km ride back to Auckland and Maraetai to drop off the bike's so no one was getting up early today so we all slept in. We walked down into Paihia for a lazy cooked breakfast and a coffee. Everyone was looking a little tired after 8 days of riding.


Getting on the bike this morning I went to take off and let out the clutch and reved then nothing. I looked down and the clutch lever wouldn't come back out, it was stuck in unless I pulled it back out. Uh really? Do I need this shit? I can't ride this bike through Auckland traffic like this I thought. As I pushed the clutch out and I took off with an almighty jerk. Wow this isn't real good riding it like this. I found a mechanics shop on the way out of town and got a can of CRC and sprayed it down the clutch cable and worked it in. After a couple of minutes it had free'd up and was working again, at least I can ride it through city traffic. Lets hope the clutch cable doesn't snap. I could also hear the chain clanking again and looking at it, it was badly in need of oiling, nothing I can do about that.

We headed off down highway 1 and we encountered lots of traffic all the way to Wellsford where we were yesterday. We stopped in at the bakery for a bit of lunch. When we went to leave the Black Pearl refused to start and again required a push start. Instead of following the highway down to Auckland we decided to back track our steps along the west coast down to Helensville and on into Auckland that way. It had a lot less traffic on it and was had a few twisty sections along it so it was a much better choice.

Turning off the freeway into Auckland's suburbs we found a petrol station to fill up the bikes. There was a police car parked on the corner of the petrol station as the traffic lights were not working. I saw a kid on a 50cc motorbike ride past and the cops didn't bat an eye lid. Then a kid on a pushbike wheelied his bike past the police car with no helmet on. Again nothing. The Aussie cops would have nabbed them both for that. NZ cops seem pretty bloody relaxed. We were going to leave and the Black Pearl refused to start again and we had to bump it yet again, this time it took 2 attempts it was getting worse. The chain on the Tracer was now really loud. I thought it might break it was making horrible noises.

We took the road out to Maraetai and to the bike hire where we dropped the bikes off, tour successfully completed. Looking at the chain it was a orangy colour, I've never seen a chain look like that before but I guess that's what happens when you don't oil it for 1500kms.

We had to wait for Randle to get back from dropping someone to the airport so we got some beers to celebrate the end of the tour. A few beers and chatting about the last 9 days and actually how fast it went by was a good way to unwind. Randle arrived with a case of Heineken and we chatted to him about the bikes and the trip in general. We pointed out to him all the problems we encountered with the bikes which was starting to rack up now. Showing him the Black Pearls non starting problem, even an hour and a half after we stopped here the bike refused to start just before we got on the bus to our accommodation. I think it was finally broken. Check out Geoff's expression at the end of this short video, I think it says it all really. We just had to laugh.

The Tracer was an excellent choice as a touring bike much better than the BMW F800GS that we hired for the south island tour we went on 3 years ago. The tracer had a much gruntier engine and accelerated much faster than the 800 which made overtaking cars an easier task. It was pretty quick steering as well but not as quick as the Street Triple or the R1 for that matter but it was good for a touring bike. It wasn't until you got into some tight twisty bends that you felt that the steering was slow and not up to it, taking a lot of effort to change direction quickly but for most of the tour it was pretty good. This might be a little biased coming from me being a sportsbike rider and used to a quick steering bike.

The suspension was also the major thing lacking on this bike being way too soft and not adjustable. If I bought one of these bikes I would buy some ohlins suspension and put on it. I think it would transform the handling of the bike. It handled quite well until you hit any big bumps in the middle of a bend which would bottom the bike out and it would start to run wide. I did this far too many times as I didn't learn after the first few times. The panniers were ok but may have been a bit on the small side but served their purpose. They probably weren't as good as the ones on the BMW which had bags to pack your gear into then you put the bags into the panniers, these one's didn't have that. I had my clothes packed into garbage bags which I then put into the panniers. The screen made a lot of wind buffeting around my helmet which made a lot of noise, if I ducked my head down an inch or so the noise would go away. Randle told us that the screen is adjustable, we didn't check unfortunately.

The engine on this bike was quite good pulling from down low with steady power throughout the rev range, it got quite the induction roar going when you got into some spirited riding and the rasp from the exhaust of the crossplane triple was pleasing to the ears. The brakes on the Tracer are quite good with a lot of stopping power and a nice progressive feel to them.

Even with the above little niggling things with the bike I really enjoyed riding the tracer it was a fun bike to ride and was very comfortable. By the time I got off on day 9 my ass felt like I had been riding the R1 for a day. I had R1 butt even riding a touring bike but it took 8-9 days before that actually happened. You could move around a bit on the seat which made it a lot more comfortable. Would I buy one? Yes I probably would and if I did I would fix the soft suspension and it would be a very capable touring bike. Plenty of power handles ok can tour well and is comfy can't ask for much more than that.

From start to finish we travelled 3728.9kms in 9 days so the Tracer dash indicated, with Stu and Rick doing about 200km more on the East Cape road. The roads on the north island are much more like the one's we have here in Australia, many of them being rough, pot hole ridden, gravel on bends, etc but at the same time some were in excellent condition. The roads on the south island of New Zealand are far superior in quality of build being much smoother, better sign posted and just better maintained. I think the north island roads are much more technical but it doesn't have the magnificent views of the south island. If you had to pick only one of these islands to tour it would have to be the south island. Both are different and both have their good points and bad and both are a riders paradise. The kiwi riders are so spoilt for choice in riding roads, point a bike in any direction and you will find a winding road within a few minutes. That said the north island has a much higher population and that shows on the roads with more cars on the road. You can travel for miles on the south island without seeing anyone.

The weather was a bit of a mixed bag and I knew we would hit rain, we picked February as it was the end of summer and supposedly the driest time of the year to ride around here with the least likely chance of rain but it didn't work out as planned(does it ever?). Temperatures were good being anywhere between 18°C and about 27-28°C, I didn't take any thermals and if you're going at this time of year you shouldn't need them. I didn't even take a jumper just T shirts. 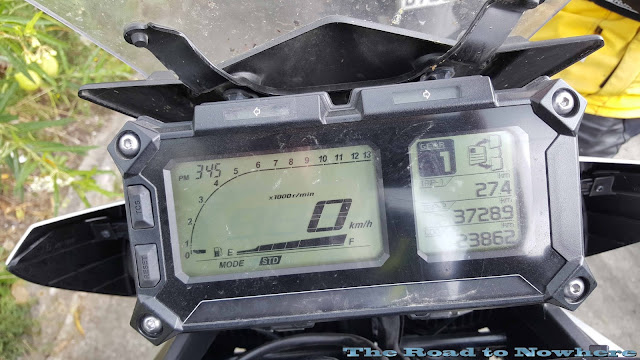 I must also say thanks to the guys - Geoff, Rick and Stu for making the trip a memorable one, it was a pleasure to be riding with you guys again and look forward to our next trip. Spain anyone? Also a big shout out for the friendly welcome from Geoff James and Andrew Tompson, two of New Zealand's biggest and best Moto bloggers. Make sure you check out their blogs if you haven't already.
Also a big thanks to my lovely wife and family for allowing me out on a trip like this, love you guys.

Another sleep in before getting up in the morning and heading to the airport. Once through customs we saw this large Hobbit prop piece on the way to the terminals. It was on loan from the actual movie set. Pretty cool. I love the JRR Tolkien books and have read them for years since I first read them in school. 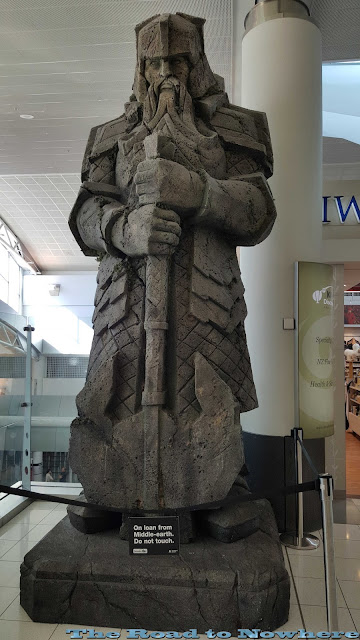 It was very quiet sitting at the airport waiting for our flights. Everyone was exhausted from the tour. We were all happy but tired and there wasn't much said by anyone. But what a fantastic tour despite the problems, we over came them and made it something to remember.

Finally here is a short video of some bits and pieces of the trip, thanks for reading and I hope you enjoy the video.