Today's ride had us travelling on some out of the way back roads and I said to the guys first up in the morning, we are going to get ourselves lost today, make no mistake. I was ready to go before everyone so I told Geoff I was going to try and get a picture of the volcano if it's not covered in clouds this morning. So off I headed and I was only two minutes away from the motel before the mountain came into view with no cloud. You beauty. It was impressive this time of the morning and the mountain can be seen from miles away in every direction. 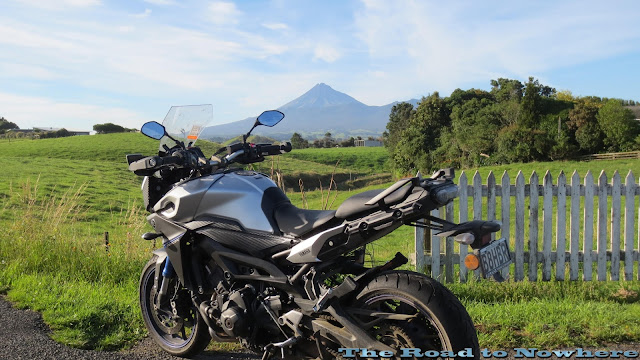 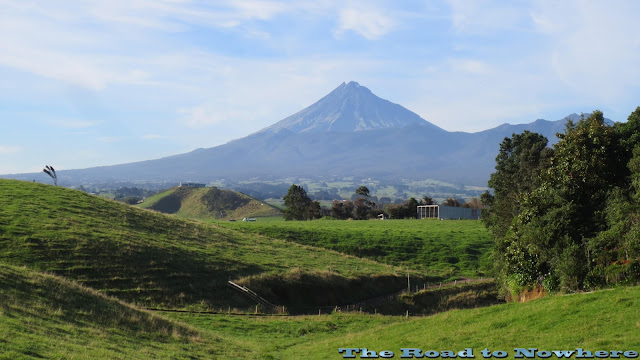 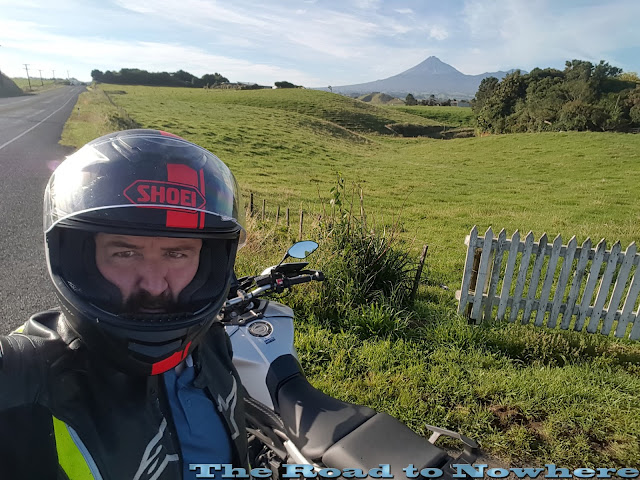 I got back to the room and the guys were just about ready to get going 20 minutes after I had already been riding. We rolled out of town along highway 3. There was a fair bit of traffic along here and there were a couple of really good twisty mountain sections that ended up going through a couple of one way tunnels. It was a lot of fun along this section until we came into Te Kuiti for a spot of brunch. 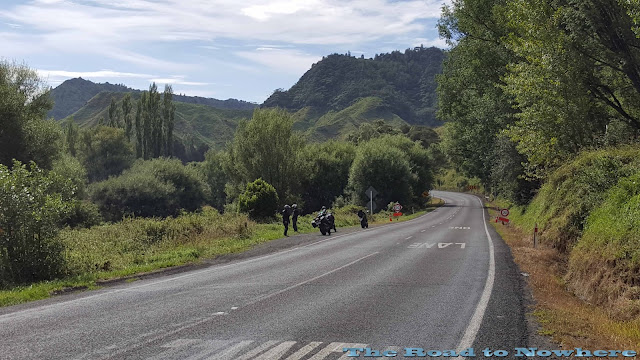 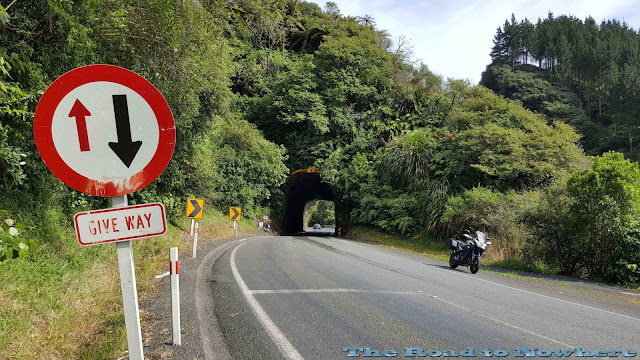 If anything New Zealand has an abundance of one way bridges and tunnels and all on major highways as well as little back roads. We continued on into Te Kuiti for brunch, it wasn't quite lunch yet and I got a coffee from the coffee shop and a pie from the bakery. We sat in the park across from the the main street next to the railway line under the shade of some tree's. Not a bad little spot for a break and spot of lunch. 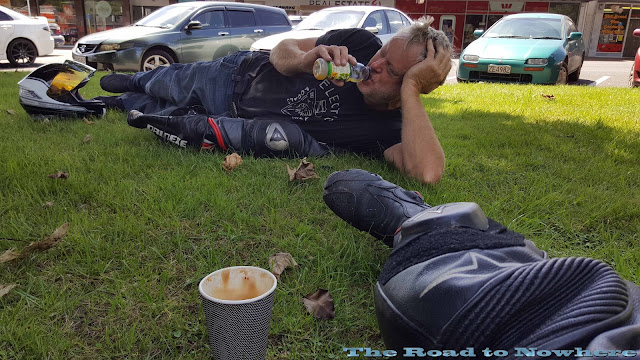 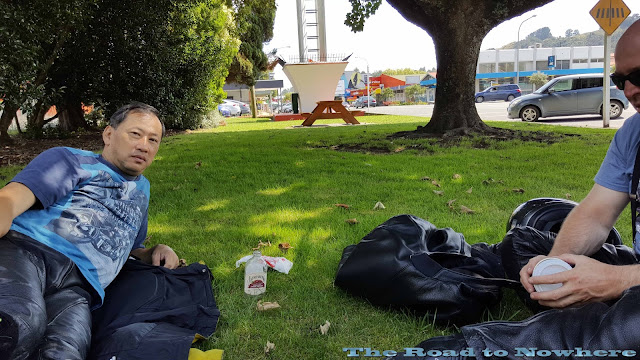 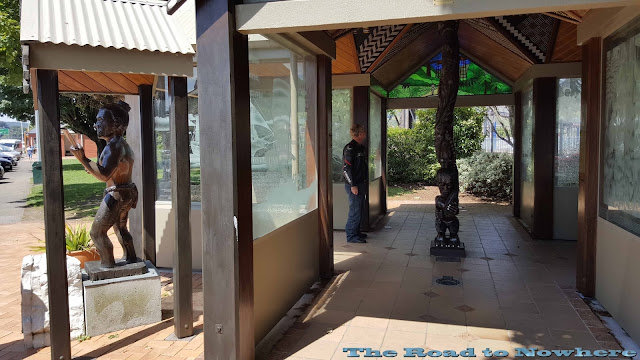 After lunch Rick asked me if I'd like to ride the Striple. 'Would I ever' was my response as I knew there were some winding roads coming up I thought this would be a great place to try this little bike.

We headed off and and were soon turning off the main highway and down the road that goes past the Waitomo caves. The caves looked to be very busy today and it was only thursday. After the caves the road winds its way along for about 30kms of 35 - 55km bends, which reminded me of the Oxley Highway back home. The striple was an absolute blast along here and it didn't take long for the others to disappear in my mirrors as I was having a cracker of a run through here. So good I needed to stop to take some pictures. But it's very hard to take a photo of this road as you can only see as far ahead as the next bend. 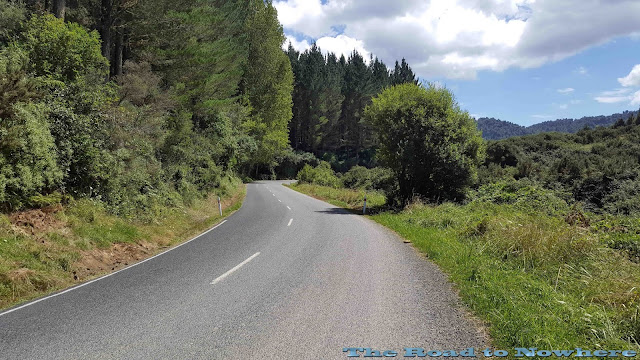 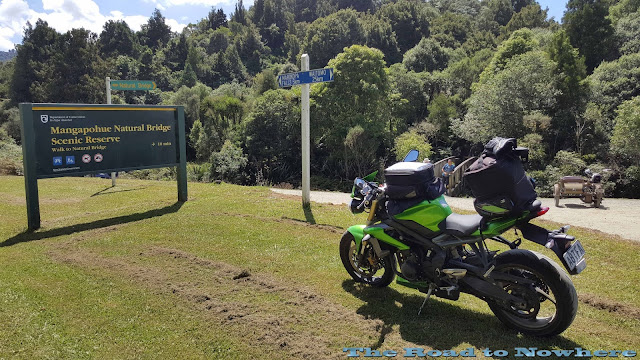 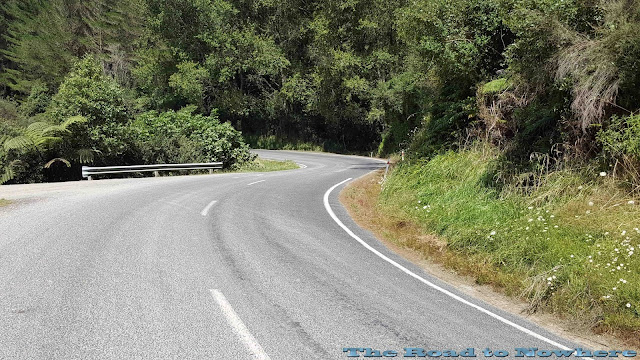 Soon after we had a quick turn to the right, lucky for me at this intersection I had the striple as it had the tank bag on it and the map was on top so I got to keep glancing at the map as we progressed along otherwise I think we would have missed this turn too. There were 2 or 3 more like this one that only had small sign and is easily missed as these were all relatively back roads, but they were oh so much fun as they had little traffic and had so many bends on them. One little section down here was being resurfaced for a couple of km so we had fresh tar seal with gravel to traverse but wasn't much of a problem really. They seem to do an awful lot of road works here in february in NZ. 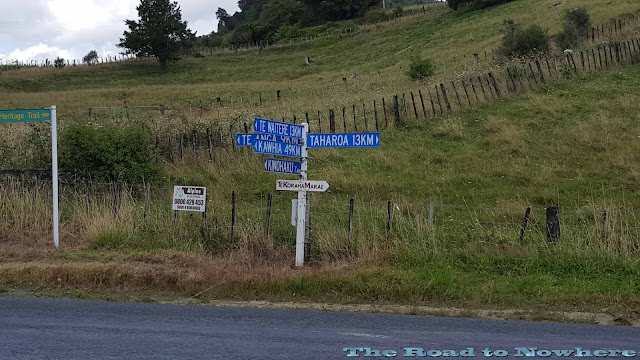 Coming down out of the hills the road now skirted around some of the coastline with beautiful views and twisting roads now with water frontage. 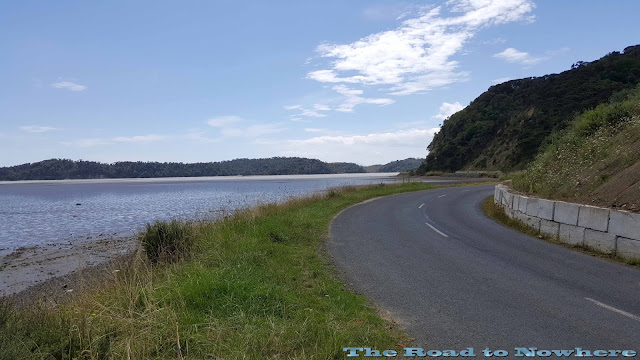 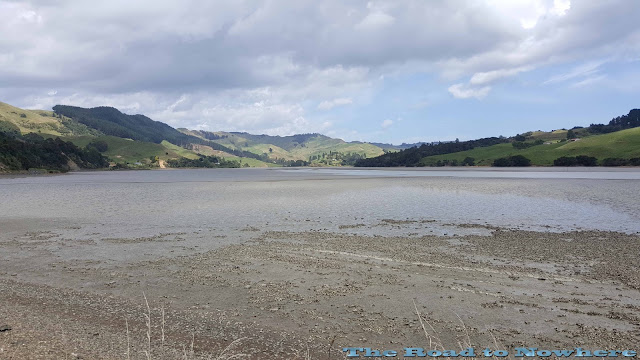 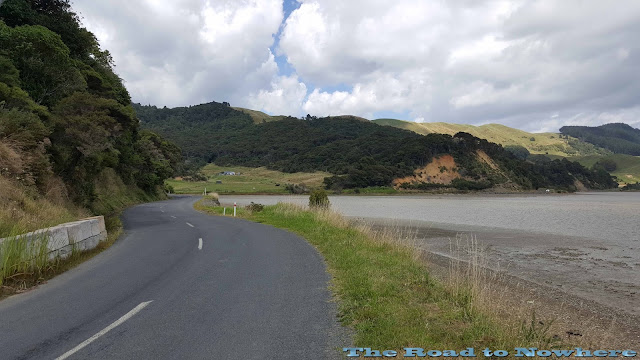 The striple was so much fun to ride on these winding roads, it turned in very quickly, much more so than the Tracer and had plenty of go but you had to wind it out, it got this great induction roar around 10,000rpm. It was a great little bike almost perfect in fact, I could have one of these as a second bike, except it's a triumph. It had good brakes, super smooth engine great handling, it's a bike that you sit down inside instead of on top. If it had the ohlins suspension then it would have been perfect. 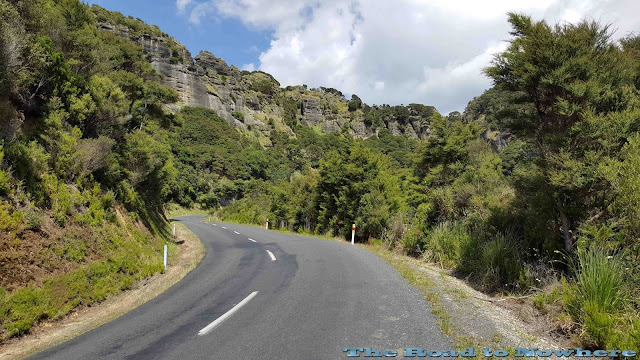 The road continued to swap between the coastline and then into the hills before returning to the coast line. Lots of fun through here before we finally came out at Kawhia which is just a small coastal village.

Sitting in Kawhia at the general store we got an ice cream and sat along the water front on a park bench. The tide was out a long way, but must be really nice when it is in. I noticed a motel across the road and mentioned we should cancel our accomodation and stay here instead. However we continued on and towards Raglan which the next section ahead had a posted 11kms of dirt. Heading out of Kawhia we turned down the road to Raglan. As I was on the sportiest bike the others soon overtook me and disappeared into the distance. After about 15kms I came down a hill and could see a t intersection ahead and a bike going left at it. A couple of minutes later I was there and looked at the sign which again was inconclusive. Why the would they take either direction when none of them actually know where they are going anyway just astounds me completely but anyways it is what it is. I thought we should go right checking the map(which was correct) but looks like the others went left so I followed them it is better to stick together. The road then got very gravelly and narrow and even more winding. I nearly binned the bike in the gravel a couple of times and wasn't enjoying it, there were huge rocks and no wheel tracks to ride in with thick gravel everywhere. We are lost make no mistake this can't be the way we've done 25km of gravel and the map showed 11km with no end in sight.

Soon the other bikes appeared around a corner waiting for me. I said to the guys we should have gone right instead of left, but they wanted to continue on. Stu rolled out and left as Bushpig went to take off I saw his sidestand was down, needless to say he stalled the 'Pearl. I yelled yet more profanities at him, as now who knows how long we are going to be stuck here. Yep the bike wouldn't start and we were on a gravel road with stuff all chance of bump starting it. Just what we need in the middle of nowhere. Good going Geoff you idiot. There was much more cursing going on as we thought of setting fire to the bike.

A bus driver came along and I flagged him down and asked where the hell are we. He laughed as I showed him the map and he showed me where we were. Yep we went the wrong way. Those that have no idea where they are going should not lead the ride. So Stu was off in the distance somewhere and we waited. About 45 minutes went past before the Pearl would fire into life again. We got going and there was about another 8-10kms of dirt before it turned into tar seal, i'd never been so happy to get off the dirt. We came to another T intersection after about 20 minutes, left to Raglan(7km) or right to our destination and guess what no Stu anywhere. This really irked me. He had no phone, no internet and no route plan because he forgot it and didn't know where we were going for the night. As we had been following the Raglan signs for the last hour I assumed he would go there so I sent Rick left into Raglan to look for him and we went right and waited for him.

About 15minutes went by before Rick came back and said no sign of Stu in Raglan. Some more cussing ensued and then the Pearl wouldn't start again. More cussing but at least there was 3 of us and we could bump start it down a hill. We got going again, I said to the others that we should be turning left within the next 12kms towards Pukekohe and guess what, yep you guessed it no F*CKING sign, I saw a road to the left as we passed the road I looked down it and saw a sign that said Pukekohe on the bottom of the sign. Well fuck me how about having that sign before the turn off not after it. I must reiterate that signage here in NZ north island is pretty abysmal to say the least. As everyone was riding at highway speed and trying to stop a group when your not 100% sure that, that was the correct road is not an easy thing. We kept going and after another 5 minutes with no other turns or signs I knew that was the road we should have taken. We were on the road to Hamilton, but this wasn't the way we wanted so we turned off at the first town we could Whatawhata and headed up towards Ngaruawahia(I got no idea how to say that). We stopped along the motorway for fuel as I'd been on reserve light for the last 50kms. Still no sign of Stu and it was just Rick, me and Geoff. We assumed Stu headed to Pukekohe.

Arriving at our accommodation for the night there was no sign of Stu anywhere which wasn't unexpected, going to reception the lady said there's a phone call for you. Well that was totally unexpected I thought. I answered it, and it was Randle from Auckland Motorcycle hire. I was quite surprised. He said "Are you missing someone?"
"Why yes we are, how do you know" was the response.
"He is on his way, he got lost and went to Hamilton but will be there soon" "He rang me and I found his route plan in his bag so he is now on his way"

So we waited in the bar at the hotel and had a few beers with a couple of local kiwi bike riders and chatted. After an hour Stu came in, if looks could kill we'd all be dead. He was about to rip into us but it was all his own doing so we gave it straight back to him and pissed ourselves laughing at his stupidity and all was forgotten,  Stu went into Hamilton and waited for us, but unfortunately for him Hamilton was never on the route plan, I guess none of the guys really paid much attention to the route plan as none of them seemed to know where we were going on any given day. We headed into town for a feed again it was late around 9:30 by the time we had dinner.