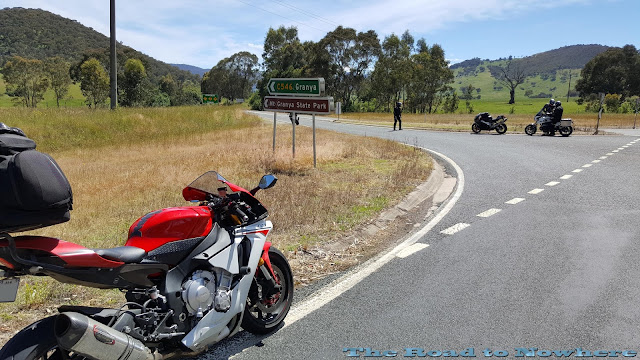 With a gobsmackingly huge cooked breakfast at the Mitta pub on tuesday morning we were ready to hit the road, some of our posse had dazed heads from a big night before. Whos said Sambuca shots was a great idea. Not I. Nevertheless we were headed out of Mitta by around 10am or so and it was shaping up to be a cracking day. Bright blue skies and in the low twenties perfect riding weather. 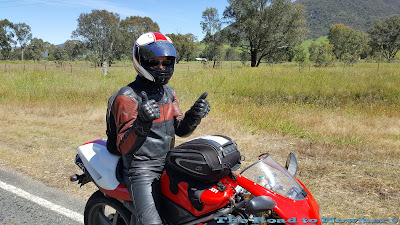 The ride back out of Mitta in the morning was better than the afternoon before its amazing what the different contrasts in light from morning to night make the landscapes look like. We were not in such a rush this morning either. This really is GOD's country here, stunning area and great riding.


Our first stop was the Granya Gap turn off heading up towards the Murray Valley Highway. Granya is a relatively short bit of road but is an awesome ride. If you've not done it before put it on your list of roads to ride before you die. The road twists its way up and over a large hill and back down the other side. 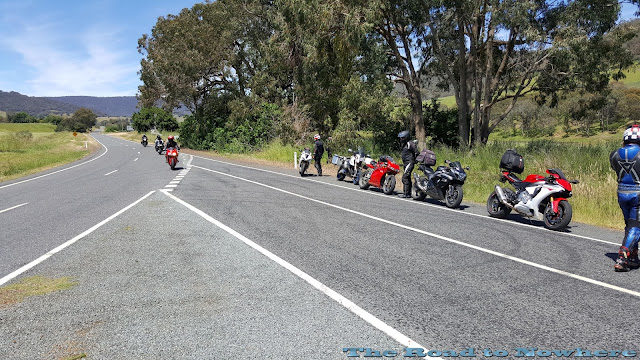 We regrouped again after Granya for a wee break and for everyone to catch up. As we then turned onto another awesome bit of tar the Murray Valley River Road. With all the rain we've had recently the river was full and the lush green hills surrounding the river made for a scenic ride. Quite often I found myself just looking off into the countryside.

The road winds its way around the southern side of the river which is in Victoria, the other side of the river is New South Wales. The river is what separates both states.
Here's some pics I cobbled together from the burst mode on my phone showing the guys riding along this section of road. Not too shabby for a phone.

We turned off the river road and crossed the bridge over the Murray river and into New South Wales at the little hamlet of Jingellic. Almost immediately I noticed the condition of the roads pretty much turned to poop with large potholes and poorly finished road works littering the road all the way to Tumbarumba. The road seemed to climb slowly up and up for a long time until we started to come upon some heavily forested sections. More stunning scenery, what is it about lush green pastures with rolling hills covered in pine trees that I love so much? 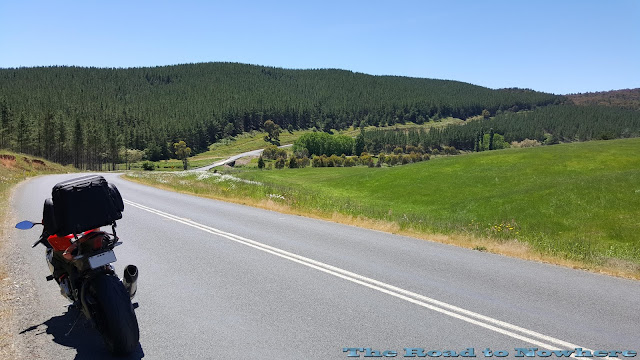 We stopped for a bite to eat in Tumbarumba so I had a nice apple turn over as I was still full from breakfast and then we headed out towards Cabramurra on the Elliotts Way. It's been a very long time since I'd ridden along this road. Its quite a sweet bit of road but narrow and a bit rough but still a lot of fun. Scenic but not so much as say Mt Hotham as on this road you can only really see the next mountain across from you as the road winds up between valleys.


I stopped at the Tumut 2 Power station to have a look but it was closed. Tumut 2 is part of the snowy hydro electric scheme that was built back in the 1950's and was opened in 1962. The power station is actually built 250m under ground in a huge excavated chamber. My brother and I did a tour through the station back in the late 90's on one of our bike trips to motogp. I think they have stopped doing the tours now which is a shame. 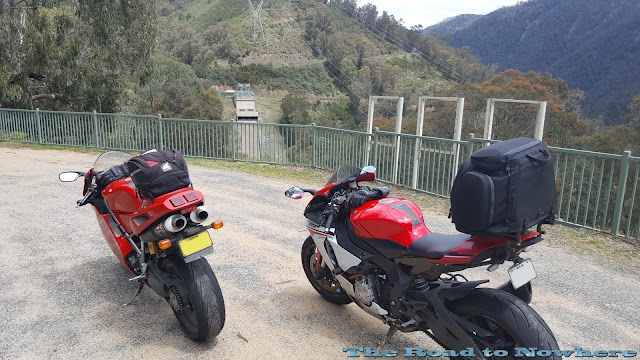 Ant and I stopped at one of the look outs to take in the scenery but unfortunately you couldn't see the tree's for the tree's so to speak. The lookout was in a bit of a valley so not a lot to see, you might say as far as lookouts go it was underwhelming. 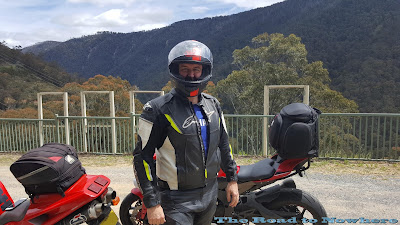 Blasting back up the hill I was having fun with the quick shifter and dancing through the gears, I was a little surprised to find the other guys waiting less than 5 minutes from the previous look out. D'oh so we stopped again to take in some views of yet more tree's and a couple of lazy ass bikers. 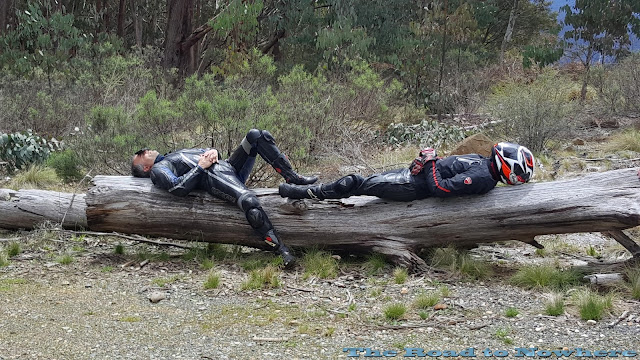 After the climb up and over to Kiandra it was a dash towards tumut and to get into boorowa. We took the back way out of Tumut into Gundagai but got stuck behind a farmers heard of cows that were running along the road and spilling the contents of their bowels all over the road in front of us. Just what we need more bullshit on this trip! 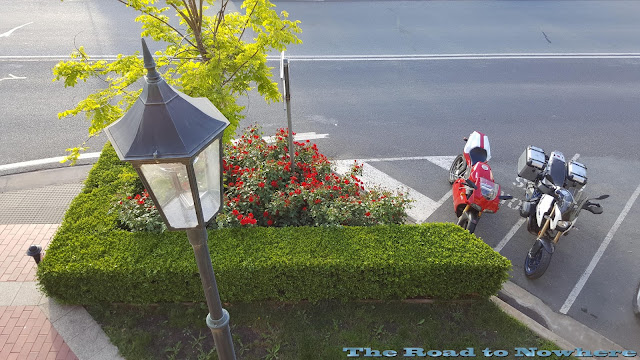 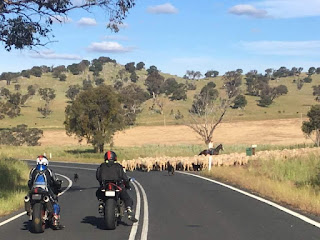 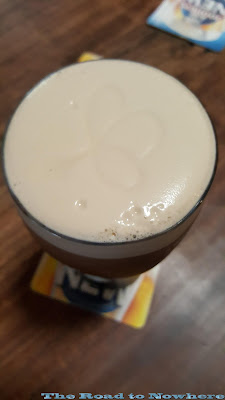 On the way between Harden and Boorowa we got stopped yet again by another farmers heard, but this time the road was covered in sheep everywhere and we waited and waited before the quick dash to the boorowa hotel where we enjoyed a few quiet ales, a Guinness or two and maybe some more sambucas to wash it all down with.

Another good day in the saddle however as always on this section the last 2 hours feels a lot like hard work just to put us back within reach of Sydney the next day so I have mixed feelings of this day. The highs of the morning riding through the beautiful mountain passes then followed by the lows of the straight boring bit out to Harden and Boorowa.