Today I decided that it was time to visit my old knee scraping friend again. There wasn't going to be any of that on this ride though. I decided to head up through Berowra Waters and cross the ferry and up to the old road.
There's been lots said in the past about the 'Old Road' as it is commonly known to local bike riders. It's real name is the Old Pacific Highway in Sydney's north between Berowra and Gosford. Many years ago it used to be the main highway north out of Sydney before they built the F3, a new 3 lane freeway, at which point it became a tourist route with little traffic.

The road itself is a pretty good one with lots of twists and turns. Its the first road that I ever got my knee down on. It's been called many things in its day both good and bad. Magnificent biker heaven comes to mind, but in recent times sadly it has been policed to the death. The road is only about 25km's long but is nearly all bends. I haven't been up this road for a few years because of the heavy handed policing not to mention the now ridiculously low speed limit of 60kmh. Last time we came up here we were pulled over for a random breath test. Yeah right as if we would be riding a highly technical road like this on sports bikes and pissed. That's just an excuse so they can then check you for other things like illegal loud pipes, rego etc 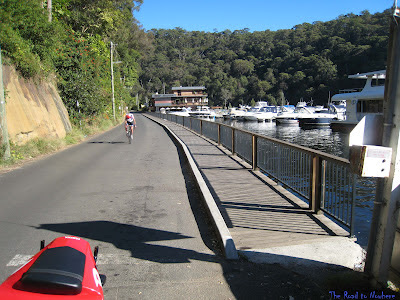 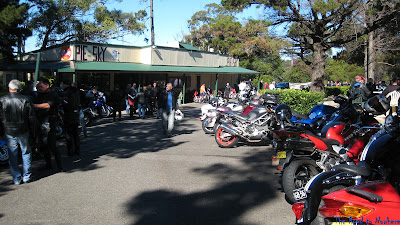 I decided to stop in at Pie in the Sky for some breakfast. Looks like I wasn't the only one as there must have been 80 bikes here this morning. Even with the heavy handed policing it proves you can't keep bikers down. I tried the pepper steak pie and was going to get a coffee but the line was huge. I would have to wait about 15 minutes so I decided on a double espresso milk instead. That pie hit the spot just right. I can really recommend the pepper steak pie. I almost got another.
It was great just to sit there and relax on a Sunday morning and watch all the bikes coming and going.

After a half hour break it was time to head off north over the Hawksbury and enjoy some of the twisties. The section down to the calga interchange is only 60 kmh which ruins it really as I looked down a couple of times to see 100-110 on the dial whilst in the middle of some bends, oops better slow down just in case. The short straights are a bit of a chore at 60kmh. 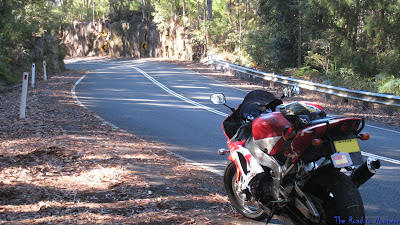 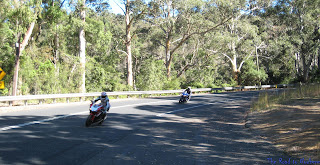 There sure were a lot of bikes out today as the Autumn weather was superb at 22°C. I saw lots of bikes come past when I stopped to take these pictures. There were even a few women riders out today. 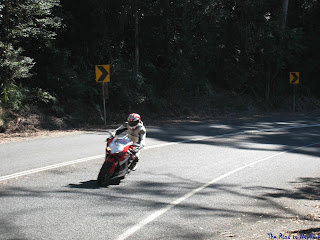 This road definetly has some of the best curves you will find anywhere around, but it can also be pretty dangerous as well because a lot of them are blind and there were lots of cyclists out on it today. Some of them were 2 abreast leaving only enough room for a bike in the right hand wheel track. 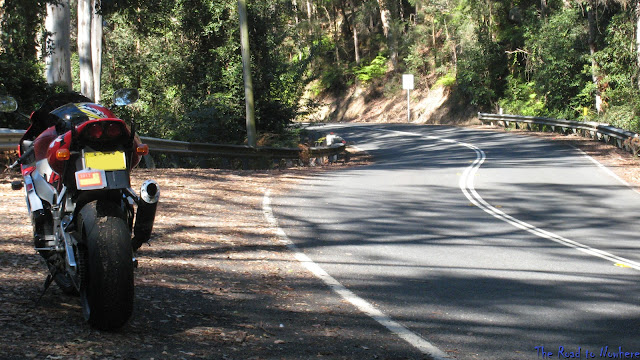 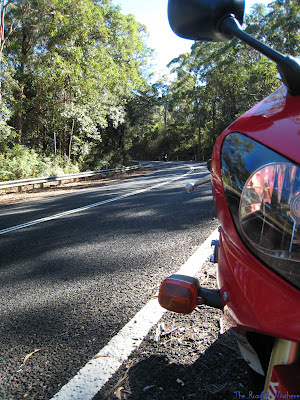 The last section that winds its way down to Mooney Mooney creek is one of my favourite parts. I also like the look of the scenery here as there are lots of ferns, kind of a sub tropical look. Got to look out for water on the road in the shadows at this time of year. There was also some moss growing on one of the bends near the photo above.

The road warriors cafe has been closed down. I wonder how long ago that closed. Looks like all the bikes that used to stop there are now stopping at Pie in the Sky.

I noticed that they have fixed the road surface where they used to have the small flat lines of tar running through the curves to join or cover cracks in the surface. Most of that is now gone to all bikers joy, they were deadly in the wet and unsettling if you hit them in the dry.


Heading south back over the Brooklyn Bridge towards the Pie in the sky and Home. 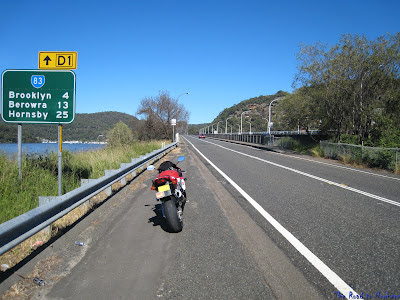 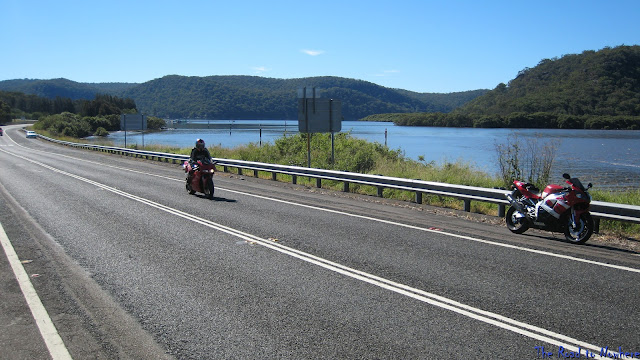 On the way home I thought that I might make a detour and take the Galston Gorge rather than ride down Pennant Hills road which can be quite busy. I'd prefer to stay away from crazy Sydney traffic. I tried out the Go Pro mounted to my helmet and was quite pleased with the results. Galston Gorge has the tightest corners I have ever seen. The sign postings say 5 kmh which wouldn't be far off. Trucks, Buses and caravans are banned from driving here as you can see from the video.
All in all a good days riding, any day I can get out for a ride is always a good day. I just prefer to go on a ride where you are not constantly watching the speedo fearful of being pinged. This road has that reputation attached to it, even though it is a good ride.
Posted by Chiller at Sunday, May 06, 2012