How much pain can one little camera inflict upon a person? I was warned about finding a good location to mount the thing and I have 3 spots picked out on the bike to mount it so far. One on the side near the right indicator, one on the rear ductail facing backwards and one on the front facing forwards.
Most of the pics from today's ride came from the go pro except the first one. Most of the photo's that the Go pro take have some weird looking distorted angles to them.

I left this morning in a little bit of a hurry and only took one of the mounting pieces. Mistake number one. We decided to head up the Putty Rd which is one of my favourites and I was excited to get some footage. We stopped at Colo River to mount the camera. Geoff says "Geez that thing wobbles about a bit' and after looking at it yes it was looking a bit on the loose side. Geoff said mount it on the side. So I look at that and put it on only to find that the screw in bits are facing the wrong way and I can't mount it. Mistake number 2 as later I thought about it and I could have reversed the first mount point backwards and all would be fine. I'm not thinking at all well today. It must be a country thing......
Turn the camera on and decide to proceed anyway. The camera said on the front SD ERR. Well F@#K me that's a brand new SD card in there that's only been used 3 times and now it doesn't work. Take it out and  put it back in a couple of times still no good. Put the camera away and continue on.
About 5 km's down the road I have a revelation. Wait a minute, I have 2 cameras with me. That means I have 2 cards. You idiot. Mistake number 3. Missed that opportunity for a video.
We stopped again just before the Ten mile section where the real fun begins. I swap the cards over from the other camera so I can make a video. Placed the faulty card down on the seat whilst  I put the good card into the camera and mounted it. Promptly forgot about the other card and now its probably laying on the side of the road. Mistake number 4. Ah well it wasn't working anyway.

We stop at the famous Cockfighter Tavern for a drink and decide to order some lunch. We ordered 2 steak sandwiches and chips. There are a few other bikes here having lunch and drinks as well. The food was great it hit the spot just right. Time to head back down the putty again. I decide to put the gopro on 5 sec photo delay as I don't know how the video turned out and I'm not optimistic.

There was a very tasty Repsol coloured fire blade at the pub. A very clean bike and good looking to. 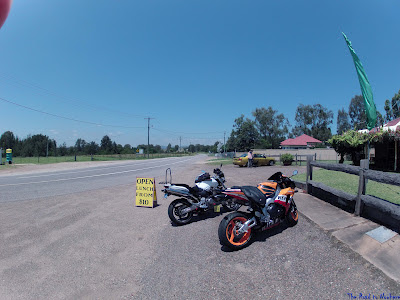 Pushing through the ten mile was heaps of fun as now I wasn't slowed down by following Bushpigs R1 trying to film him, I completely put the Gopro out of my mind and concentrated on my riding. This allowed me to concentrate on my riding and lines I was taking which made for a hugely enjoyable run. It was getting pretty warm out today about 32°C but it was excellent riding weather. This section of road also tested out my newly fitted brake lines. I must say that there's a world of difference between the crap rubber hoses they put on as standard compared to braided lines, so much more feel and power, none of that spongy crap. 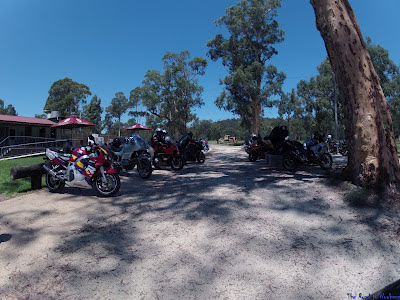 We decided to stop in at the Grey Gums cafe for a bit of a break and a drink. I needed it after pushing hard through the ten mile section. A nice cool poweraid was in order. We sat in the shade for a while admiring the other bikes and chatting with a few other riders. The general consensus from everyone was its great to finally get out after all the rain we'd been having.
Coming back down to the Colo river section I mounted the Gopro on the side this time as it should work there as I tried that spot before. When I get home and check out the videos I was pretty deflated at the results. The first video of the ten mile is unwatchable the camera was shaking so much. Although about 95% or the photos it took on the way back turned out ok. The second video I took down the Colo river section turned out ok, still a bit of camera shaking but not as bad as before. Thats before mistake number 5 takes over and I accidentally format the SD card before getting the final video off so I lose that one as well.
At least we had a great days riding which was long overdue. Maybe i'll have to look at mounting the gopro on my helmet as it shouldn't get to much vibration there.
Gopro 1  -  Chillertek 0
Getting home it was fantastic to get out of my hot sweaty leathers and into the pool with and icy cold beer and just relax after a hard days riding.
Edit     15-02-2012
P.S. Forgot to mention that I lost a knee slider on the ride just after I overtook another guy on a bike going up hill at warp speed. Felt a tugging on my left knee, looked down and no more knee slider.
Posted by Chiller at Monday, February 06, 2012

Email ThisBlogThis!Share to TwitterShare to FacebookShare to Pinterest
Labels: Gopro