Whats in a good photo?

What makes a good photo. I have lots of photos, some good, some bad and some down right shitty ones. But what makes a good photo?
Having though about this for quite some time I have come to the conclusion there are usually only 2 things that make a photo good. One of these you can see and then one of them you can't.

What the hell am I talking about? Well let me explain.

In other peoples blogs there are many photos that I say, 'wow' that's a nice photo, usually with some type of fantastic landscape with either a bike or part thereof a bike in the shot. These photos usually don't have any meaning to me as I've most likely never been there before. So basically the subject matter in the pic must be very good, IE unusual landscape, bright coloured trees/fields, snow capped mountains etc. or lighting/shading effects, reflections, or angles with bikes etc in the photo.

On the other hand we have the photo that does not necessarily have any of the above in them but is a good photo. How is this possible? These are the photos that may not really have anything fantastic or unusual about them but will evoke a memory or a particular emotion of that time. This cannot be seen by the blog reader only by the blogger.

Let me show you one of my favourite photos. That's me on the left. 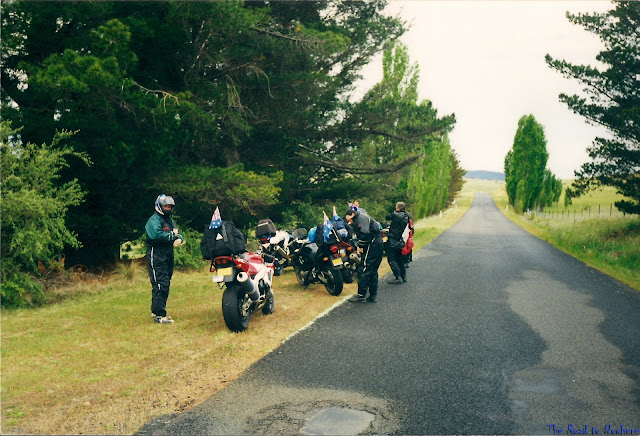 As you can see there's nothing really special about this photo but let me tell you why I think this is one of my favourite, therefore a good photo.

This was taken by my brother near Delegate in the NSW Snowy Mountains on the way back from Philip Island during the 2000 500cc GP. This was the first ride out on my new R1 after its first service(1000kms) with a bunch of good friends that we had been riding with for several years. We all had very similar riding styles and about the same skill levels, everyone knew what each other was going to do. There was no mucking around waiting forever for someone to get ready or catch up. We all seemed to do things in much the same way which made everything go smoothly. Bikes were 1 ZX9R, 2 x R1's, 1 x CBR1100, TL1000R and GSX750.

Just coming out of Delegate we could all see the clouds looming  closely in the distance and we all pulled over and started putting on our wet weather gear. I looked at my rear tyre and said 'HOLY SHIT' its bald, both in the centre and on the edges. Its the first time I had ever worn out a rear tyre with only 2600kms on it and also worn out the edges of the same tyre not just the centre.

After my bro took the pic we continued on towards Cooma which was about 60kms away. Not long after it started to rain and I wasn't game to continue on at the pace everyone else was riding at so I had slowed to about 100-110kmh. My friend Geoff slowed and followed me into Cooma, which I didn't expect but was very welcome. The previous year I had followed him into Mt Beauty after his rear tyre was chewed to bits coming down from Mt Hotham. My tyre wasn't as bad as his, by the time he got to Albury for a new tyre the belts were hanging out of his.

This one photo holds many memories and emotions for me it's hard to put them all down into words without boring the pants off of you. This was some of the best riding on some of Australia's premier biking roads and we thoroughly enjoyed ever minute of it. This is the reason why it is one of my favourites, it is also one of the second last rides I have been on with my brother to the GP which I must admit I miss riding with him as we are very similar in riding levels and also the best of friends. I think the last ride I went on with him was our tour of Tassie(I'll have to post a blog about that later) in 2003.  I am sure it will hold a different bunch of memories for my bro as he was having a ball at speed with the other guys, waiting for us to catch up in Cooma.

Still a very memorable picture for me, making it a great photo.
Posted by Steve at Sunday, January 01, 2012