Today was the first day that there was no rain. Hooray!! We were staying in central Palmy so we wandered down to the centre of town for a look around and get breakfast. I would have liked to spend a bit more time here as Palmy is a pretty big place, they've got just about every restaurant you care to name of any nationality too.

Wandering down the street it's funny that we bumped into this place only 200metres from where our motel was. Ironic and appropriately named considering the circumstances! 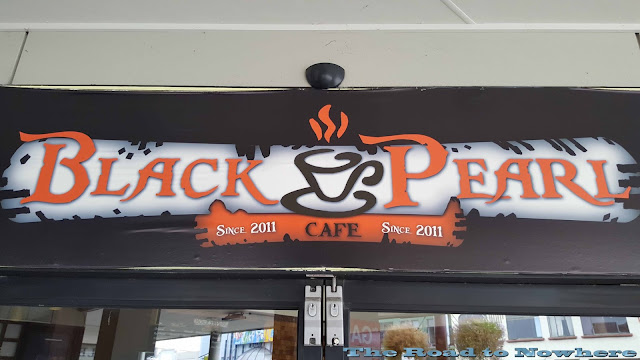 The city square is quite big and open with there being plenty of space to roam around. Nice place it's a lot bigger than I thought as have been most of the places we've been to, unlike the South Island most towns are quite small. It was pretty quiet out this morning and it was around 8:30am shops were open but no one around, it was a bit bizarre as there was people everywhere yesterday afternoon.


During breakfast discussion surrounded the Black Pearl and what to do. As it started fine once cooled down we all were in agreement that if we stop for photos on the side of the road that we need to leave the thing running otherwise we risk it not starting. It fired up fine in the morning, just hot starts seemed to be a problem. What a great advert for Triumph, scratch ever buying one of those POS off my list. We fueled up in Palmy before heading out to fielding and then on up to highway one via Vinegar Hill. I loved this little section of twistys it was so much fun. I've read about this on Andrews blog a few times and now I know why he comes this way. 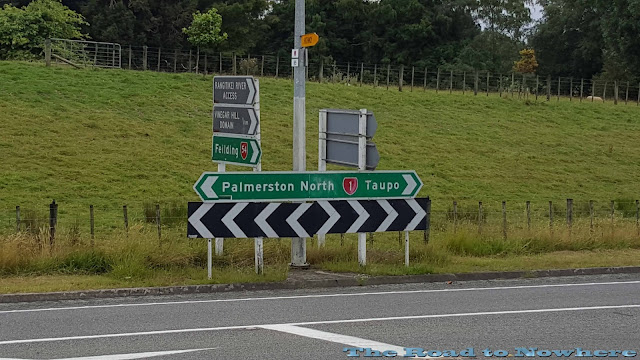 We then took the road to Hunterville and turned off down this great little twisty backroad to Whanganui. Thanks for the tip off where the turn off was Andrew we didn't miss it and stayed on track. A few bends into this road a logging truck came flying around one of the bends partly on our side reminding us that it's a weekday and to be careful. The scenery along here is much the same as other areas we'd been through hilly scenic farmland. Whilst it is very beautiful I realised that most places on the north island looked very much similar, but the riding is still a lot of fun. 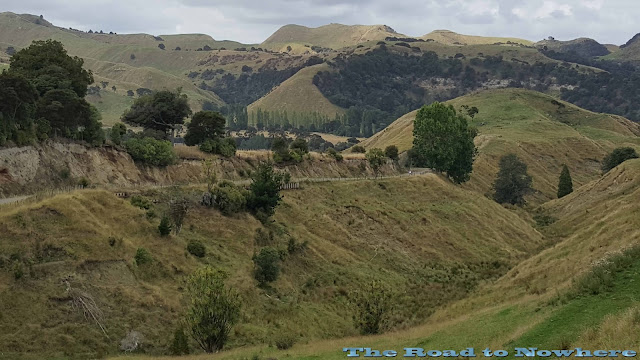 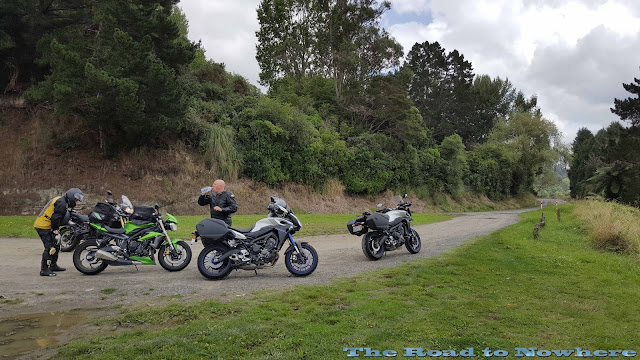 Arriving in Whanganui the signage here was also non existent and we rode into town until I checked the GPS on my phone and realised the road we came in on was where we needed to be. We went back and looked for some fuel I could hear my chain making a horrible noise so time to oil it. Whilst checking the chain I noticed it was as tight as a guitar sting. WTF? I checked Stu's Tracer and his was the same. All the bikes chains were way too tight. We had no tools to adjust them so we oiled them and continued on. The can of chain lube the bike shop gave us also ran out here too. I knew that 1 can that was only 3/4 full wasn't going to last the trip.

We then headed up highway 4 towards the national park. This road was a good bit of fun with more sweeping bends over hills but there was a fair bit more traffic on the road as it was a main highway. There were quite a few sections of road here under repair and one section where half of the road was washed away and they were working on fixing it. We came upon Raukawa Falls. As far as waterfalls go totally underwhelming so we quickly moved on. 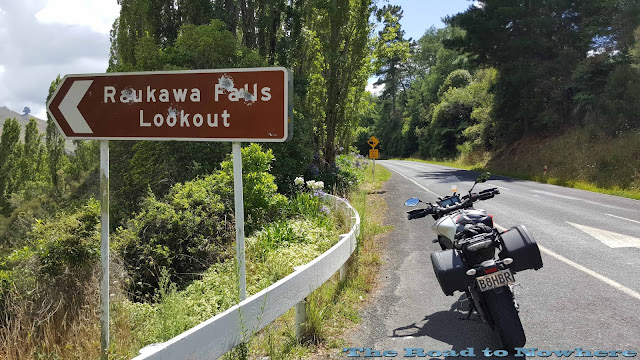 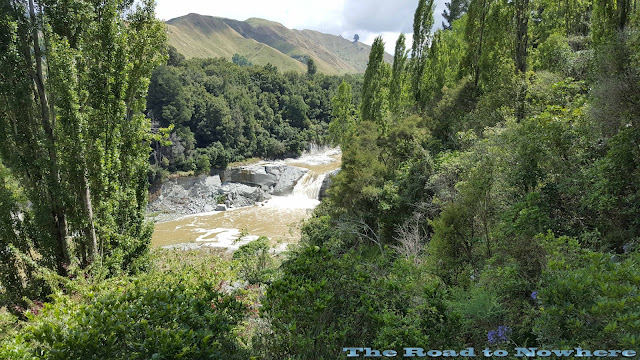 We continued into Raetihi for a spot of afternoon tea/lunch. I'd noticed that most places in NZ the coffee is very weak and we were continually ordering double shots wherever we went but the food in NZ is really good quality.


The ride up from Raetihi to the National Park was more or less straight but Mt Ruapehu suddenly appeared looming large on the right hand side. A pretty impressive monster to behold as mile after mile we rode it got larger and larger until we turned off and headed up towards the village at the base of the mountain. The riding up here was good and the temp dropped from 25°C down to 19°C as we went up. Mt Ruapehu is 2797m(9177ft) which is higher than Australia's highest peak at a measly 2228m(7310ft) yep this is a monster compared with our peaks. Ruapehu is also an active volcano and Geoff was threatening to throw the Black Pearl into the fires of Mt Doom.. 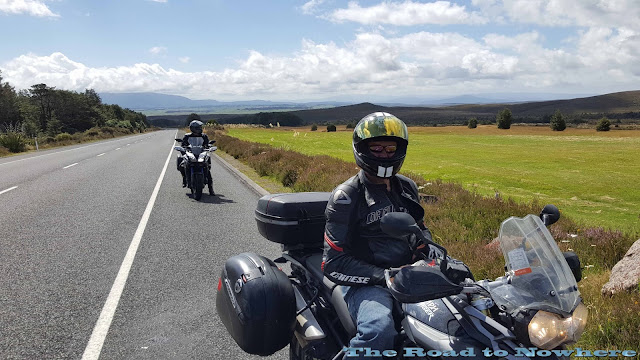 Mt Ruapehu is a tourist mecca during the winter as a ski resort, during the summer it brings out the trampers and day trippers and us bike riders and Lord of the Rings sightseers. There were choppers flying up and down the mountain and the ski lifts were still taking people up to the top. The road up to the village was in excellent condition and twisty but there was no flying along it as we were too busy admiring the scenery. The views from the top were spectacular to say the least. 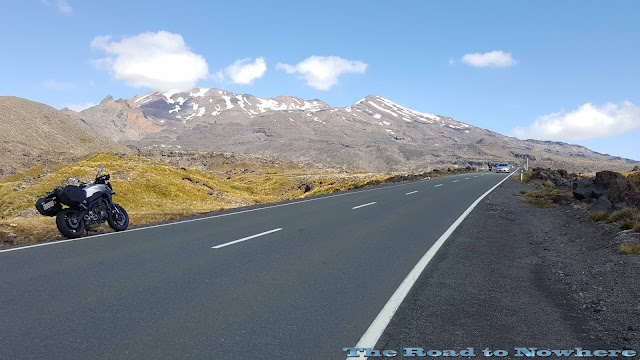 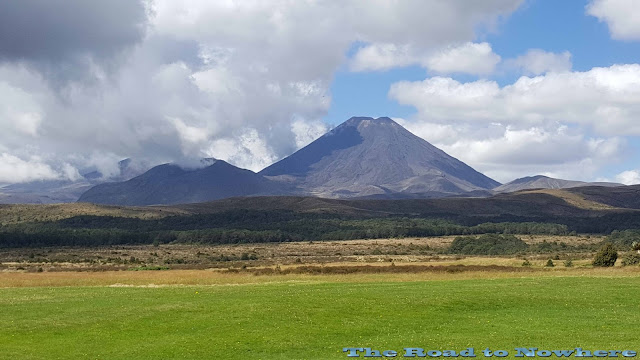 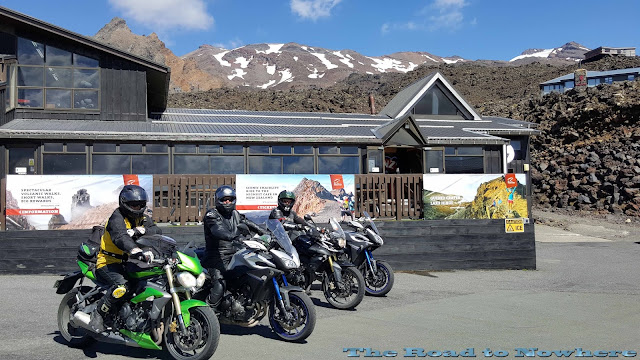 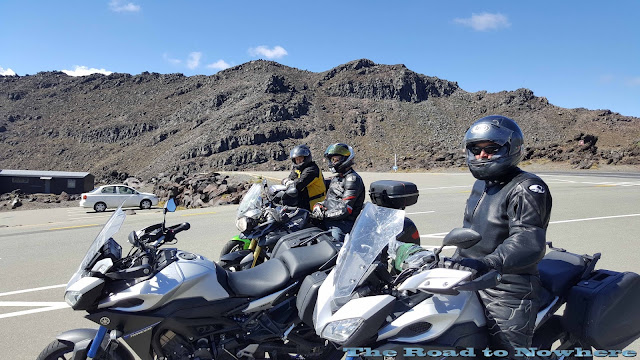 We rode up as far as you could go to the small village at the top. There were ski lodges wedged in the volcanic rock terrain which looked more like something from mars. Quite unusal terrain that I'd never seen before. The volcanic rock was hard to touch and walk on but I noticed the soil around it was very soft underfoot. 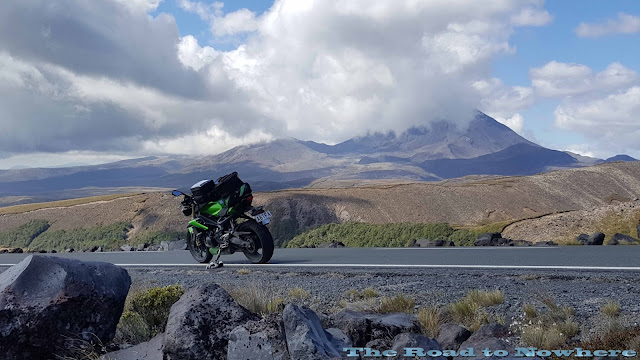 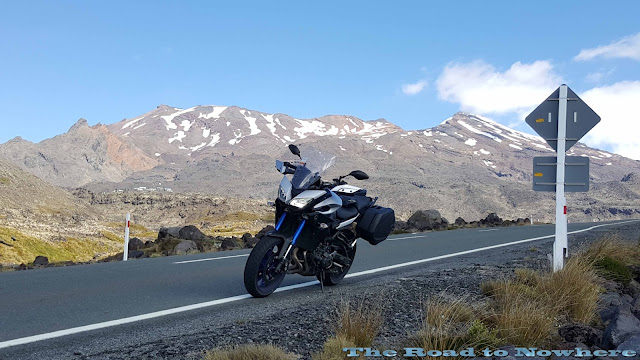 The final stretch from Mt Ruapehu to Lake Taupo was only a short 100km run. The road skirted the bottom of the 3 peaks here and then made its way to the Lake itself. The road twists its way around the edge of the lake but this is a main road and traffic is very heavy making progress slow. There were a few people going for a swim in the lake. The lake is massive in size and from the southern edge we could see the town of Taupo on the northern side about 20kms away. 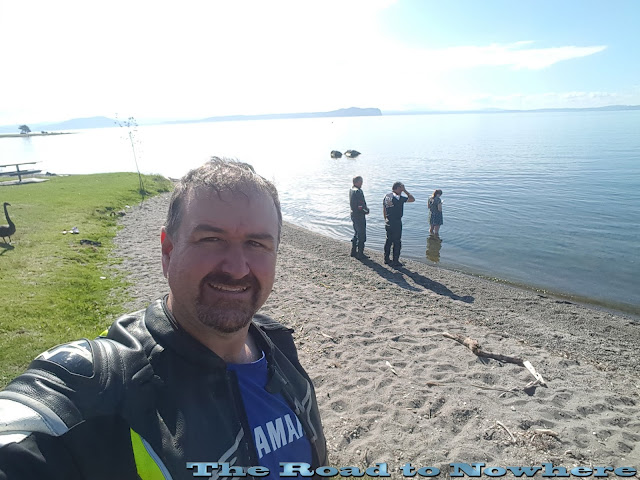 Arriving in Taupo the town was very busy with a lot of tourists. There were people swimming along the waters edge and the pubs along the water front were full of people. Taupo is a bustling little tourist town and would be a good place to spend a few days if time permitted.


We stayed in the Lake Taupo Motor Inn here and the accommodation was fantastic. The booking.com people had gotten the details wrong but the lady sorted it out for us and upgraded our room in the process. They had a spa and large pool that we put to good use over a few beers before we headed down to one of the restaurants for diner. Geoff also managed to catch up with his daughter who just happened to be holidaying here in NZ. We were lucky today with the Black Pearl as it stayed running during most stops except for fuel and when we did turn it off we stopped for lunch or fuel break long enough and it restarted on it own.