For some reason I couldn't sleep even though I was exhausted after events of the previous day, and I had only a couple of beers so it wasn't the drinks.  The others slept in until about 8:30am and then got up. The forecast on the metservice was for 140mm of rain across the interior of the Island in the Rotorua area. Rick wanted to cancel tonight's accommodation and stay here again which was considered by everyone. Riding winding roads in torrential rain isn't high on my list of fun things to do but Stu told us all to man up. 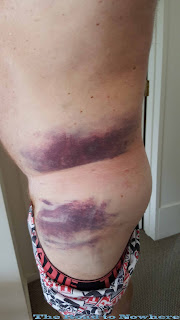 Geoff came out and said "Check this out" showing us the previous day's effort. It got bigger and darker over the coming days and he looked a bit sore getting on and off the bike. Ouch!

Looking for fuel on the way out of town we found a Yamaha dealer which we stopped in at to borrow a set of allen keys. The Tiger's steering was as bent as a high court judge after the crash, so we loosened up the allen bolts holding the forks and then re straightened the steering at least Geoff could ride it properly now. By the time we had done this and found fuel and actually got underway it was about 11am again with another 470km ride planned for the day around the east cape and throw in some rain and it was starting to look like it was going to be hard work.

Less than 5 minutes out of Rotorua the heavens opened up and we had to stop again for one optimist to put his wet weather gear on. We soon turned onto highway 30 to Whakatane. There were 3 huge lakes that we skirted around the edges of that I would have liked to stop and take some photos but it was raining so heavy it would be a wasted effort, you couldn't see the other side of the lake it was raining so hard. Then the rain became biblical, at one point there were rivers of water 5 feet wide flowing along each side of the road and I was sure I was going to see an Ark float down one of them. I saw a car ahead plow through water across the road with water spraying higher than the car into the air so we slowed down to 30kmh. If we hadn't seen that happen and hit the water across the road at 80-90kmh we would have aqua planned and all crashed, the water was 2 - 3 inches deep.

We arrived in Whakatane and continued on however only 1 bike was following. I stopped and Rick went back to see where the others were. He came back a little while later and said the Tiger had stopped and wouldn't start so we went back into town.

We found a bike shop that had just closed and the owner took pity on us poor Aussies and reopened to see if he could help. He put a new battery in and the Tiger fired straight up no problem. Geoff decided he would also buy a new rain suit at the shop to replace the one he ruined yesterday. It gave us a chance to oil the chains as well. 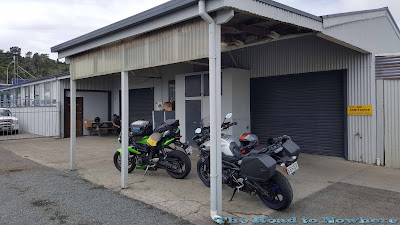 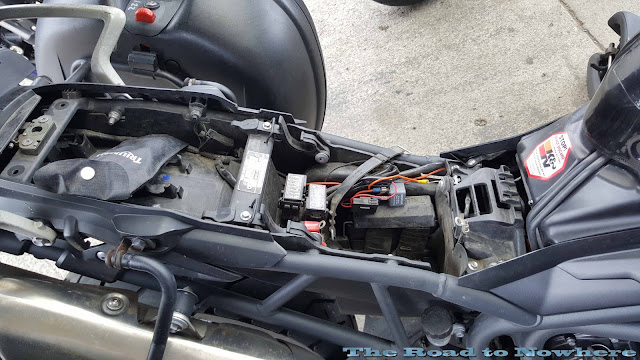 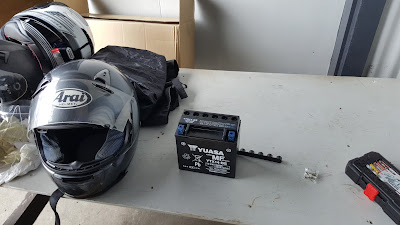 We left Whakatane and followed the coast along to Opotiki. There are some fantastic little beaches along the road here and lucky for us the weather had finally come good again and the road was dry so we picked up the pace a little. I was feeling tired along here and thought I could do with some coffee. The coastline along here is pretty stunning.


The coastal ride into Opotiki was very scenic and it was about 2:00pm by the time we got there, so we put in a splash of fuel. Coming into town I was feeling the effects of the lack of sleep so we stopped for a quick bite at the bakery and a coffee. I really needed a double shot coffee to pick me up. By the time we were ready to get under way our group decided to split up, it was 3pm and the route plan had us tackling the east cape road with 4 and a half hours(326km) of riding to do with highly technical winding coastal road. Stu and Rick headed that way with Geoff and myself taking the shorter option of Waioeka Gorge to Gisborne which is only a 2 hr(143km) trip which should put us in Gisborne by 5pm. I just couldn't consider taking that much on so late in the day and being as tired as I was, I thought that was really pushing my luck when I didn't really need too. 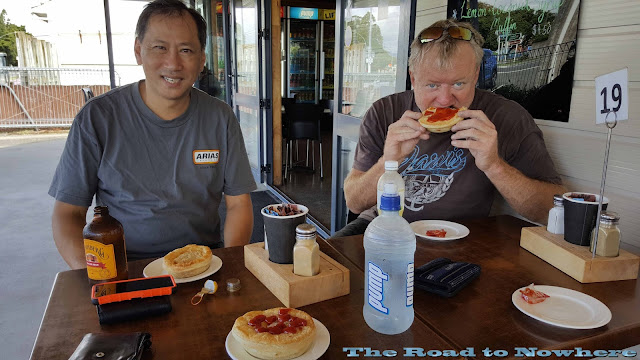 Riding into the Gorge we could see rain in the distance heading for Gisborne but it was a fair distance ahead. The gorge was dry to start with and a fabulous run but the further we got into it we came upon wet patches. Motorcycling is all about confidence. When you have it you can ride like the wind and when you don't it can be slow and painful.

With the road changing from dry to damp to wet then dry again in patches it made it difficult to judge how fast you could go into some of the blind corners and on top of that both Geoff and myself were having little slides in the wet here and there. You could see small patches of oil on the surface of the road. As I said motorcycling is a confidence thing, this afternoon wasn't to be our day with what happened yesterday and the small moments we were currently experiencing we took it very cautiously. The roads here seemed to be very slippery in the wet and our confidence was probably at an all time low. 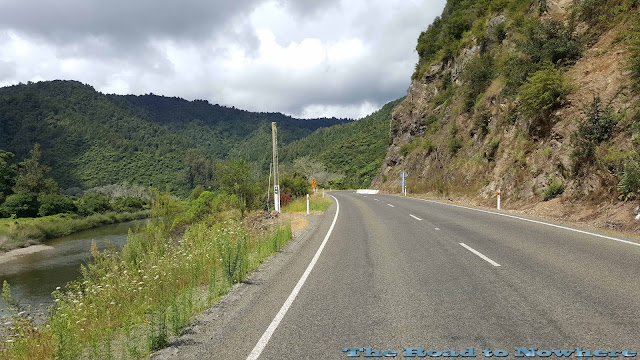 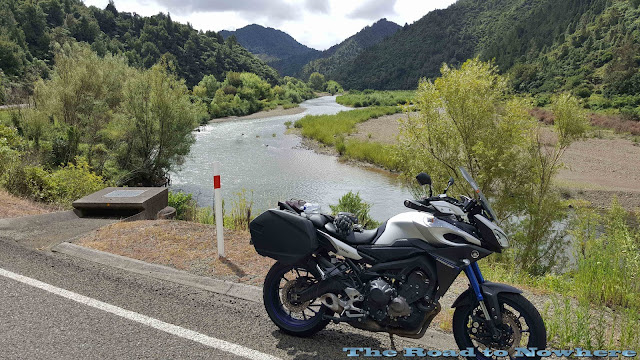 The road through the gorge pretty good, some spots were a bit broken up but for most of the way it was ok. There were quite a few rock falls on the road that we had to be careful of. I would like to ride this road again in the dry it would be much more fun, it's very scenic as the road follows the river through the gorge with massive hills on either side. 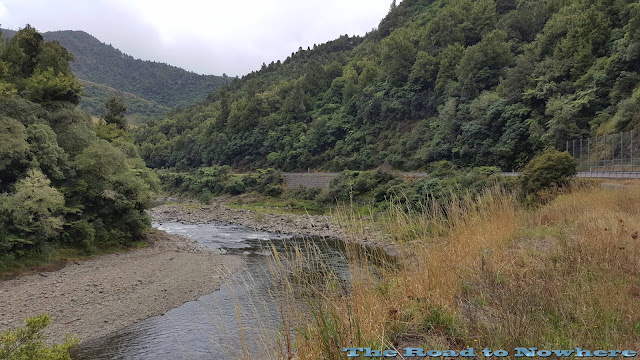 Coming out of the gorge the road then opens up and makes it way through rolling hills filled with farming land, as we approached the crest of one hill we could see we were about to come into another rain storm so we stopped to put our wets back on. I noticed that the tar on the road was in very poor state of repair. That black patch was as slippery as when we walked on it and most of the chip seal had sunk below the surface of the tar. No wonder Geoff hit the deck yesterday. 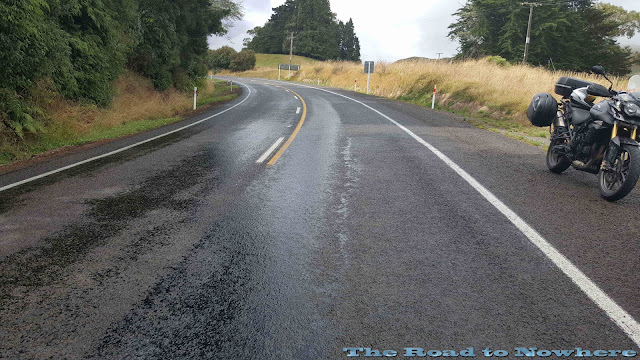 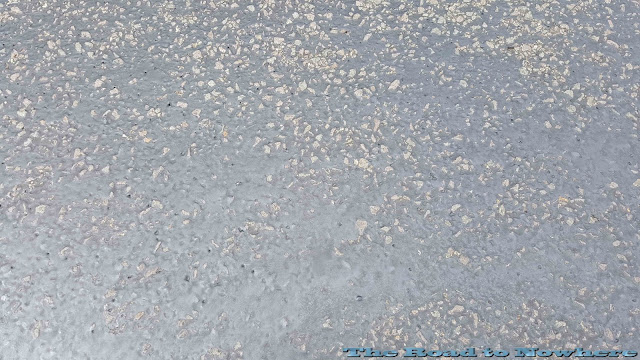 Just as we were setting off for Gisborne a rainbow appeared to our left and below us, quite odd to see one down so low. 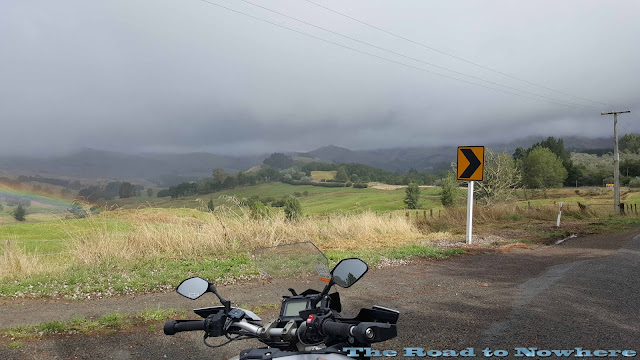 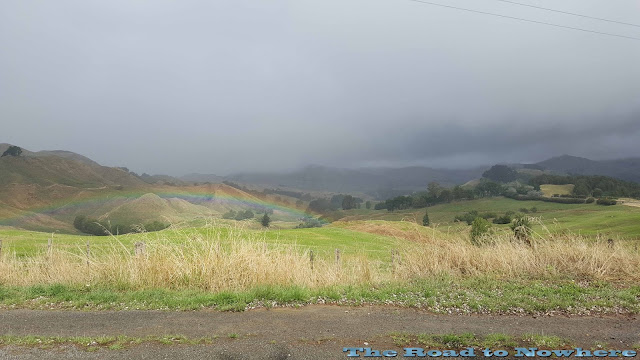 The trip into Gisborne was through some light drizzling rain and we made it in by 5pm as planned with no more incidents. Geoff and I made an opportunity to wash some clothes as his got covered in red wine in the crash yesterday. Both Geoff and I were glad to be off the bikes as we were both tired.

Gisborne is a pretty little town and as I've found with most towns on the trip has a large clock right in the centre of town, this is a unique thing to New Zealand so far that I've seen.


The beach was only 1 minute from our accommodation but wasn't looking to pleasant this afternoon. We stayed at the Captain Cook motor lodge which had pretty decent rooms and laundry facilities. Stu and Rick arrived into town at about 7:30pm and met us for diner at the local pub at around 8pm. They had a ball riding the coast road which was dry all the way. I would have loved to do it but not in my current state of mind. At least tonight I got a solid night's sleep thankfully.