Today's forecast was for very hot weather and it was already 25°C(77°F) at breakfast time. Lucky for us there was some light cloud cover and we were at fairly high altitude so that kept it cool until around midday.

First up was the ride from Khancoban up through the mountains to the Tooma Dam and Tumut Pond which are part of the Snowy Mountain scheme.First stop was at Tooma Dam where we regrouped and took a round of photos whilst taking in the coolish weather whilst it lasted. The roads through here are narrow and winding with lots of forest that come right up to the edge of the road, just have to be careful of wildlife through here but it is motorcycling heaven. 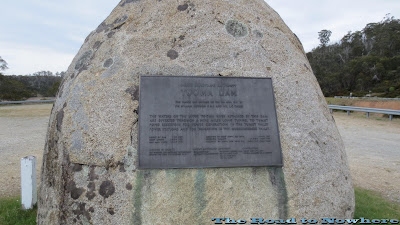 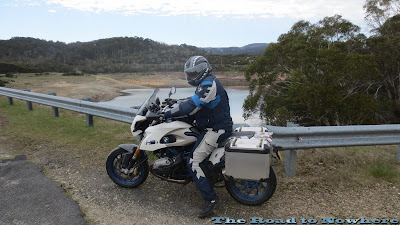 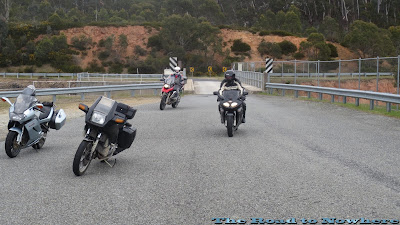 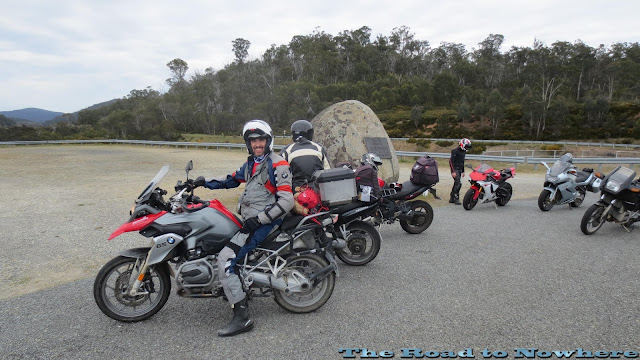 Setting off from Tooma Dam and heading up higher into the mountains towards Tumut Pond there was all sorts of bends on this bit of road from long sweepers to twisty sections up and down through the mountains. I was having a ball through this section as the fuel consumption gauge will attest to as I'd used 8 litres for 67 kms. I did stop several times to take some photos along the way and wait for the others to ride past so I could take an action snap of them. 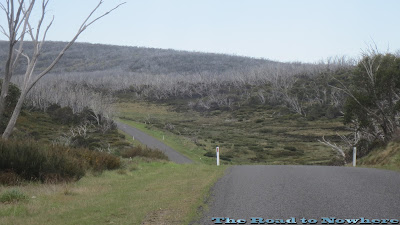 Coming down from the top of the plateau the road winds its way down the mountain and you can see the vast waters of Tumut Pondage in the distance looming up large in between the hills. I just passed Wayne coming down the twisties and was about to go for it but I thought I'd let Wayne stay with me to help him out in the twisties as he could use me as a braking marker. It must be pretty hard riding these roads with only one eye, so Wayne has my full respect for doing what he does. 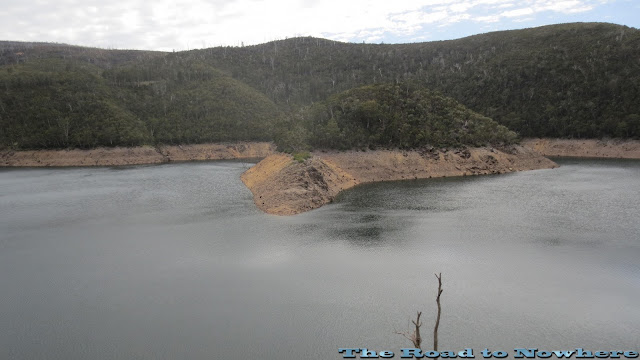 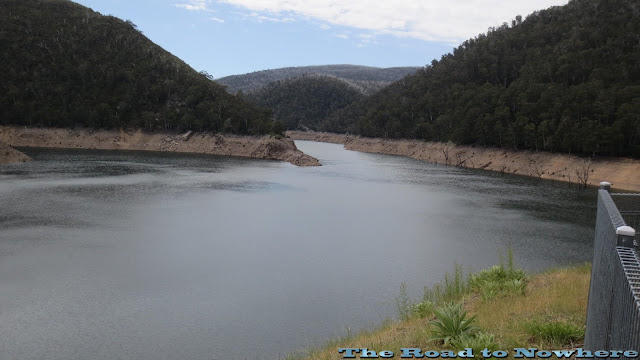 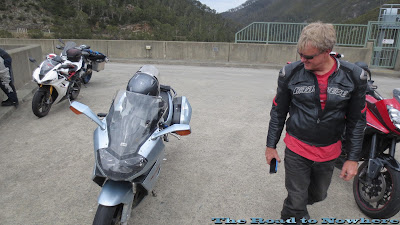 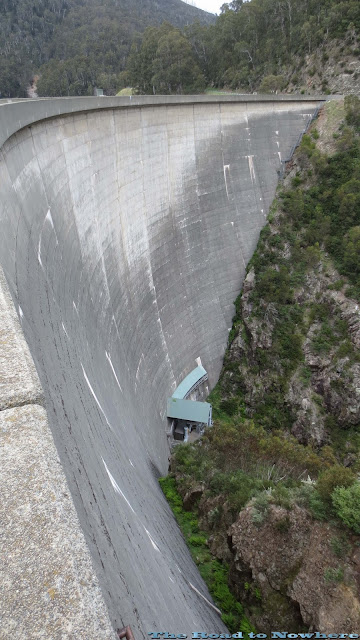 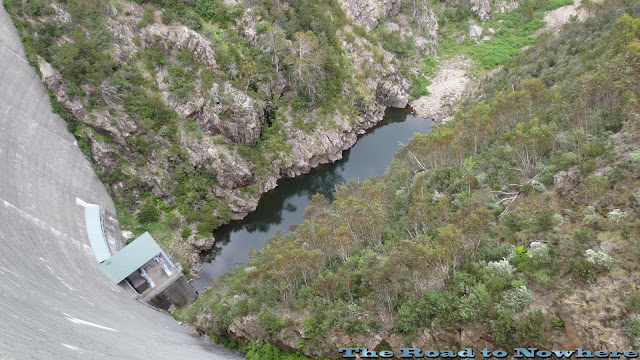 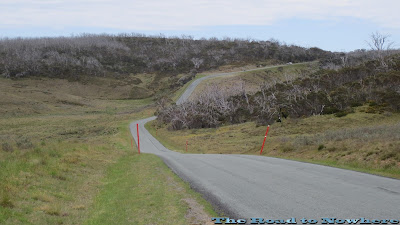 Leaving from Tumut Pond Reservoir and the road winds its way back up into the hills again with all different types of bends, glorious sweepers, straights up hill and down dale. It didn't take long and we'd gotten into Cabramurra. I thought I get a splash of fuel here but the petrol bowser was out of order. I'd have to get some in Talbingo. So we rode on out and up to Kiandra which is on the snowy mountains highway. Kiandra is just a name on the map as there is nothing at all there, just the turn off sign below. 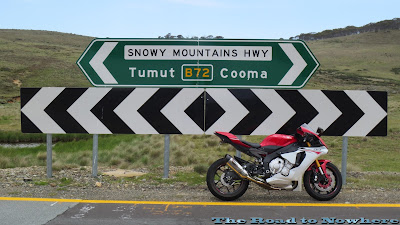 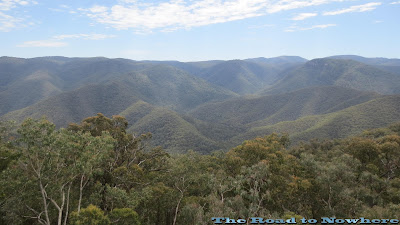 As we came up to the end of the plateau that is the snowy mountains the road drops down Talbingo mountain in a steep section of 8kms of twisty tarmac. The faster we descended the mountain you could feel the temperature rising and that blasting dry heat. The temperature had risen to 41°C(106°F). We stopped in Tumut for lunch at the Woolpack Hotel. The airconditioning was a godsend just sitting there with an ice cold lemon squash out of the heat. 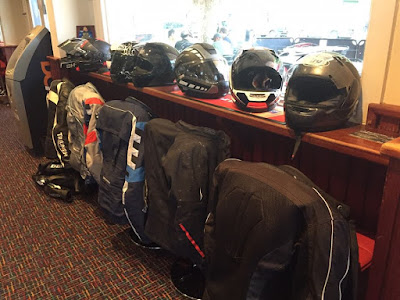 Then Steve came up with a totally absurd idea of going down to the river for a swim. I didn't think that I'd like to get out of all my gear just to go for a swim, but after getting back out into the heat and down by the river it looked quite inviting actually. So there were about 5-6 of us that stripped down and decided that we go in. It sure was a shock to the system going from 41°C air into water that was probably less than 10°C, the water was coming down from the snowy mountains from melted snow after all. Refreshing. 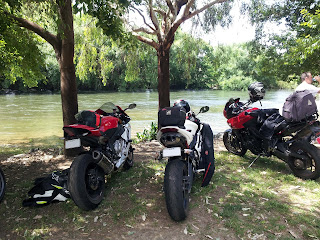 I'd decided that I would swim in my shirt so that it would stay wet for a while whilst riding that way I could get some free evaporative cooling going. It only lasted about 20 minutes in the heat but it was good while it lasted. 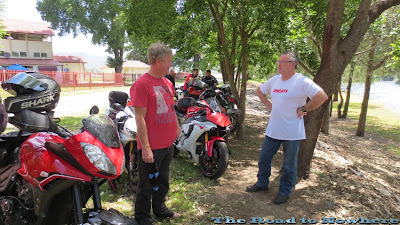 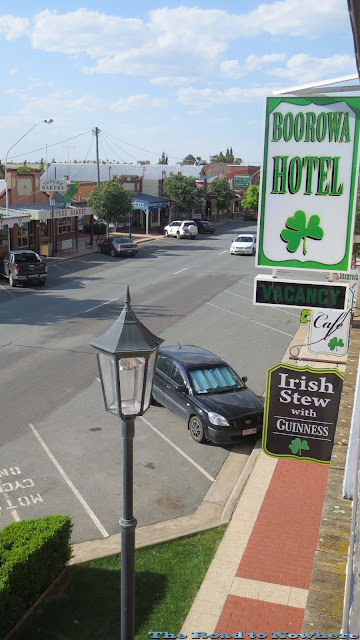 After our swim in the river it was time to make tracks and head for our digs for the night at the Boorowa Hotel. This was only about an hour and a half distance from my old home town, kind of familiar territory for me. The ride in the heat was starting to get tiring and i was feeling like just getting there. No time for stopping, no time for photos, just get there get out of the heat and have an ice cold beer at the bar.

It was so good to get inside the cool pub and get out of our hot bike gear. The food at the Boorowa Hotel was top notch for a little country town pub. I highly recommend staying here if your travelling through and looking for somewhere. 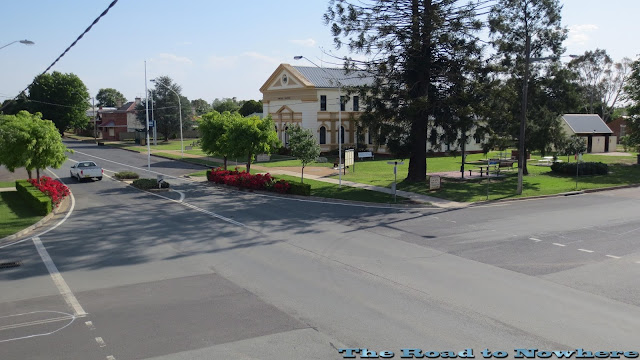