The boys were having the continental breakfast this morning but Flyboy and I decided to go to the St Mary's bakery. Sadly the pie at the bakery was ordinary at best and the coffee was slightly worse than ordinary. Another cup of milk with a dash of coffee. One thing I've discovered this trip is that the coffee's are hit and miss here in Tassie. Some great and others are terrible. Probably should have stuck with the continental breakfast. Oh well.

This morning we got to ride up over Elephant Pass and down the other side. We were looking for a photo spot that we stopped at 19 years ago but went past it. So I decided rather than go back we'd make a new photo spot instead. Trips don't have to be the same but the nostalgia is nice. 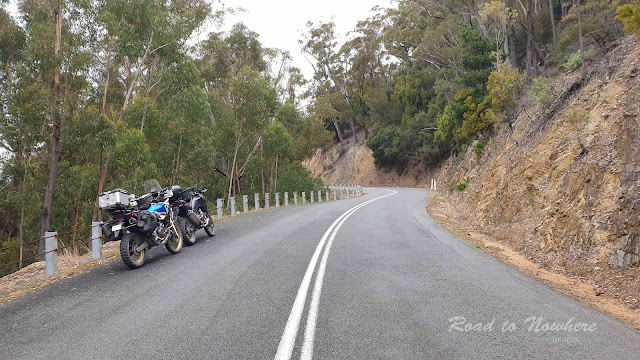 It was a bit damp this morning and a little cooler compared to yesterday but the riding was a lot of fun. The pancake shop on elephant pass was for sale. I would say another victim of covid, with no tourists they were probably forced to close and sell. It's a shame to see such terrible times. 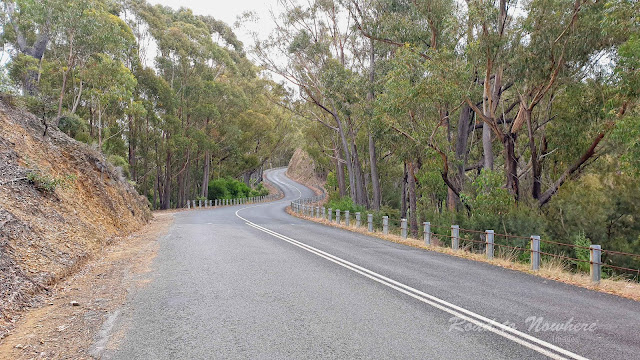 Coming to the end of the road we turned down the coast towards Bicheno, the road opens up to sweeping bends with views of the Tasman sea on one side and hills on the other. We were soon in Bicheno and as we rode in there must have been over 100 old style Vincents, triumphs, BSA's etc just starting up getting ready to ride out. Amazing to see so many riders in the one spot. I saw about four or five trailers but amazingly there was only 1 bike on one of them. 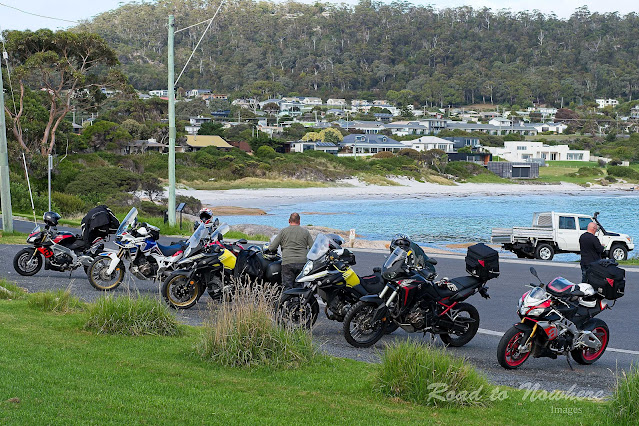 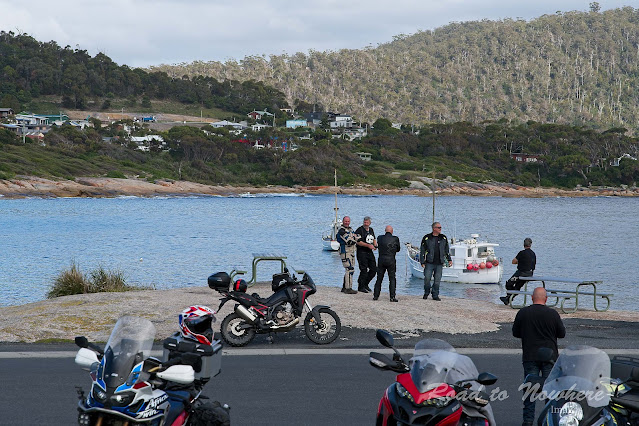 We took a break along the foreshore of the bay in Bicheno before moving along. The plan was to ride down into Coles Bay for a look about the Freycinet Peninsula. 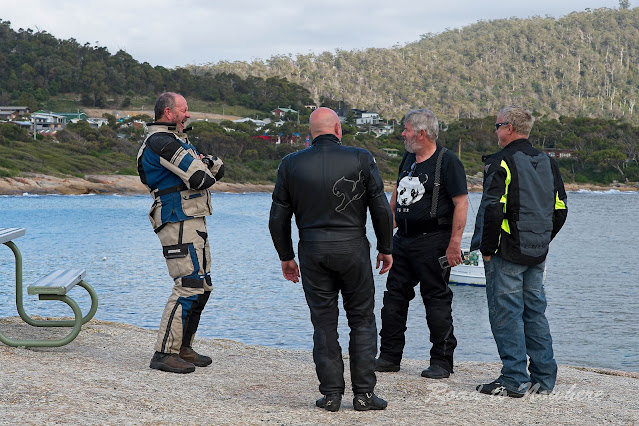 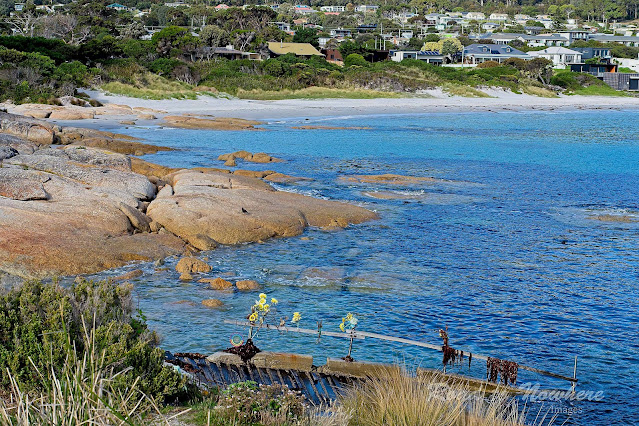 By now it was starting to warm up nicely at a respectably 23°C, the ride into Coles Bay was a mixture of long straights with some nice flowing curves. It's only about 30km from the main highway. We made our way to the waterfront and gapped at the jaw dropping views over the bay. 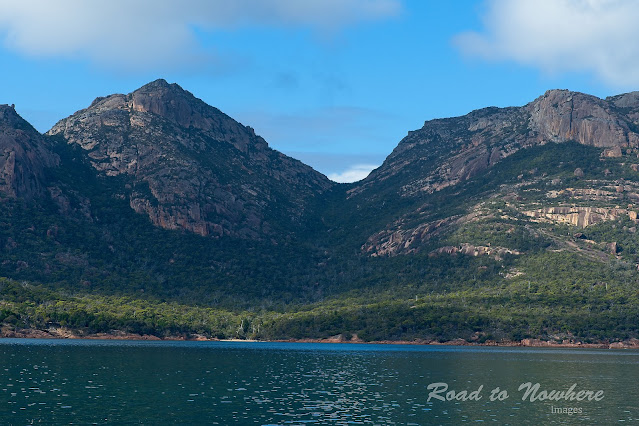 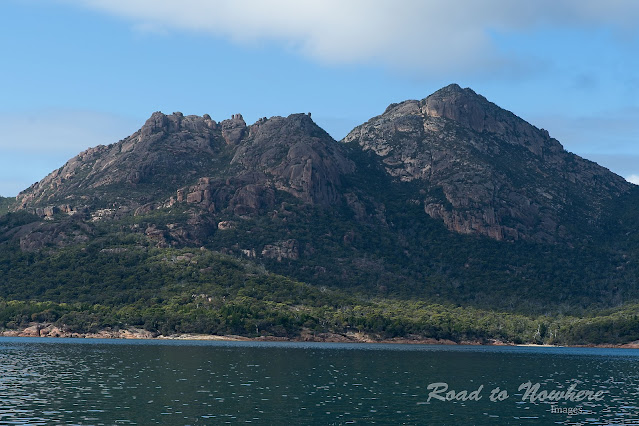 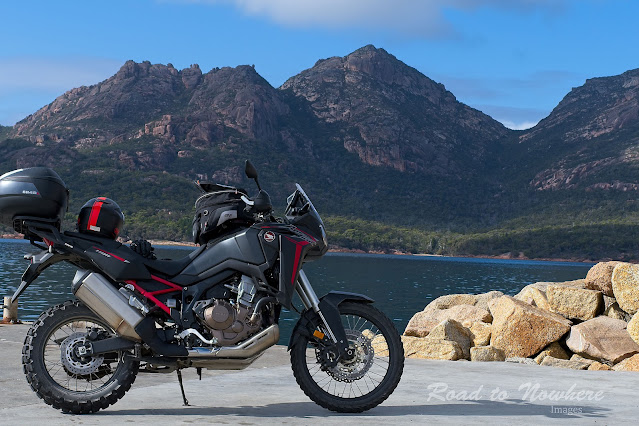 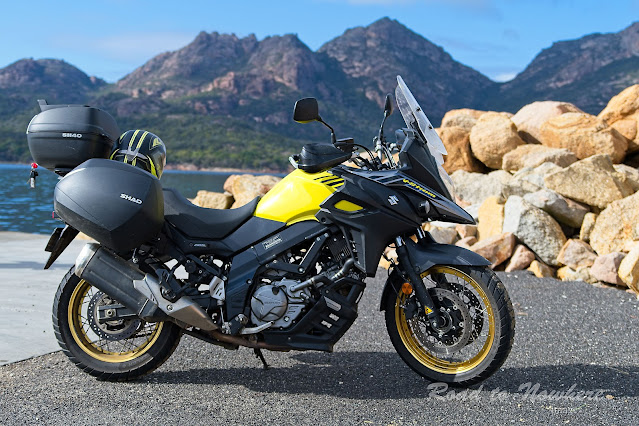 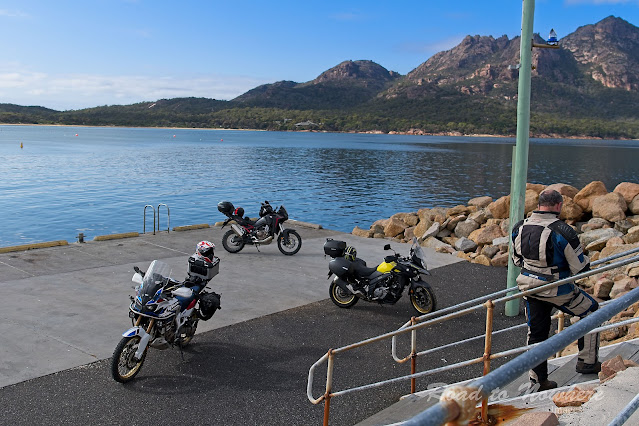 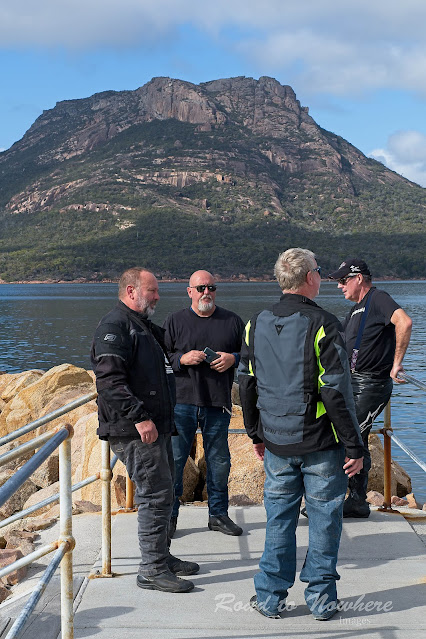 I was in desperate need of a caffeine injection so we made our way to the main shops which consisted of the general store, an ice creamery and a coffee shop. Just what I needed. A nice cake and coffee went well filling a hole. The boys were going to do the Lake Leake road which takes you up to Campbelltown in the centre of the Island. There's no good riding up there and I wasn't overly impressed with the road last time we rode it so Flyboy and I decided to ride down the coast instead. 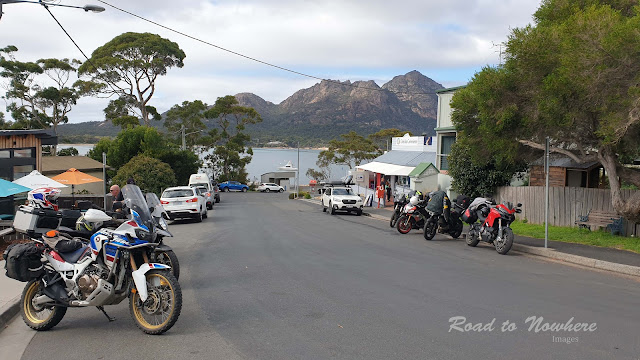 The crew turned up Lake Leake road and Flyboy  and I rode into Swansea, not much here and out the other side. He wanted to stop at the same spot we stopped at 19 years ago for a similar photos. The exact spot we couldn't park the Africa Twins there as they would have fallen over due to the road camber so we stop just a little further up but the end result looks the same.
Todays weather was much better than it was back in 2003, it was quite warm today. The coast road is quite scenic with a smattering of small towns along the way. Some of these places sure did have a horrible stench, like a lot of small fishing villages by the ocean do. 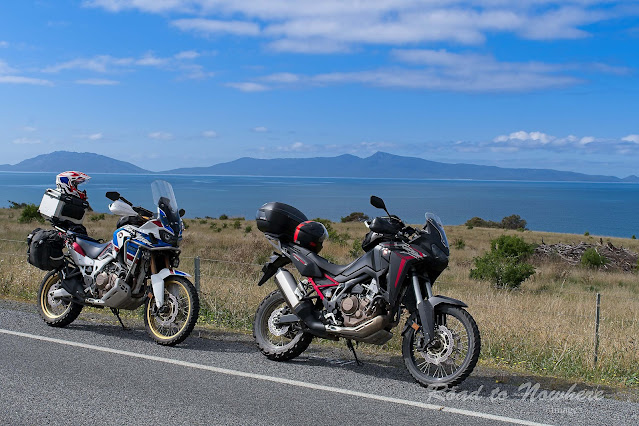 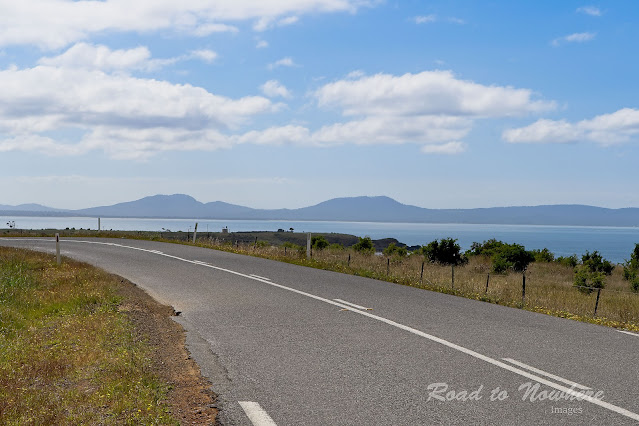 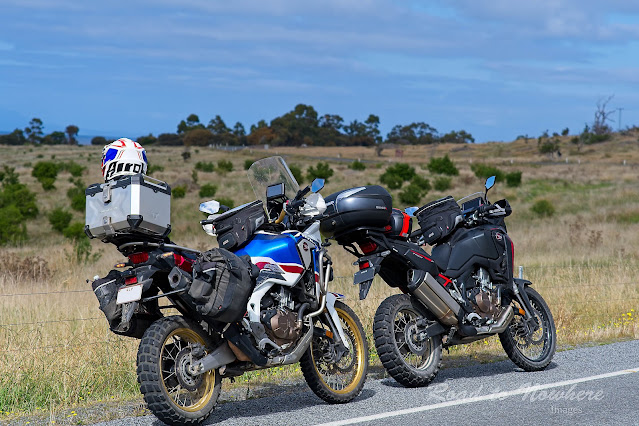 We'd just got underway from the coastal stop when I saw this very old stone bridge by the roadside, so we pulled in to take a look. We aren't in any hurry today as we are only going to Hobart. Built by convicts back in the 1840's, so Flyboy and I had to ride over it and pull a few mad skids. 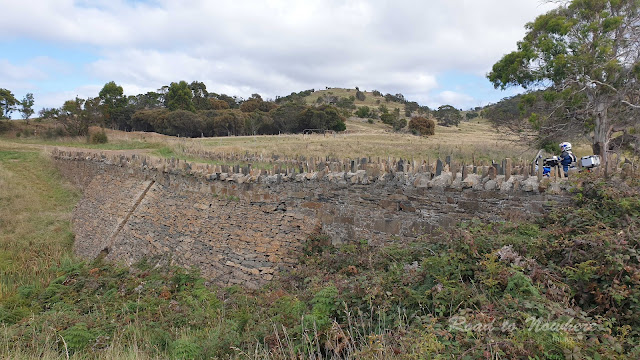 We continued down to Orford and I was starting to get hungry, I was eyeing off lunch stops but didn't see anything that tempted me enough. We stopped by the river on the way out of town. Flyboy shared a chocolate bar and we decided to stop at the Buckland Inn for a beer. Ok. 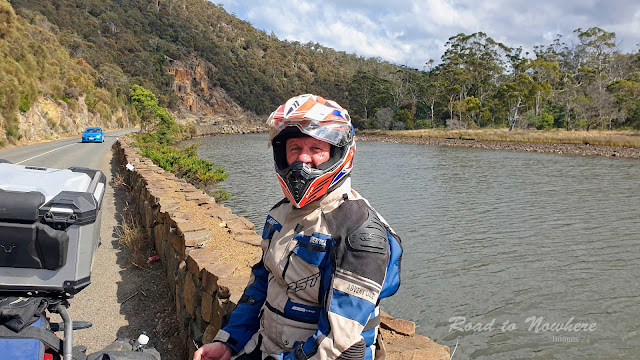 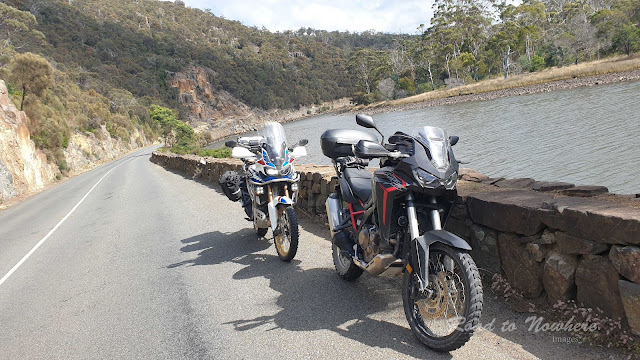 Crossing the Brandywine Bridge into Buckland the Old Buckland Inn is just back from the main road, perfectly located to be out of the way. We parked up and Flyboy got us a beer. Cheers big ears......
Another spot we'd visited back in 2003.
We contemplated going down through Nugent via dirt roads to Sorrel for lunch, but we didn't know how long it would take so just blasted straight down the highway. I saw Banjo's bakery and it was decided. Over lunch Flyboy suggest we go up Mt Wellington seeing it was a good day. I thought yeah why not, we would be coming into Tuesday peak hour traffic in Hobart soon so lets get up there.
Just as we turned up the Mt Wellington road we were stopped by a stop/Go worker. The road was closed for maintenance until friday he said. Damn it, we leave on thursday so no Mt Wellington for us then. Flyboy said "Follow me there's a pub just around the corner back on the main road" So off we went and pulled into the carpark. There was a lady standing out front working in the garden, she yelled out to us they are closed today. WTF?
So down and dejected with tail between our legs headed back into Hobart to fuel up and then go to the Casino where we are staying for the night. As we filled up the other lads blasted past on their way to the casino. So we pretty much arrived just after they did. As they were renovating the building we were staying the the units next door. 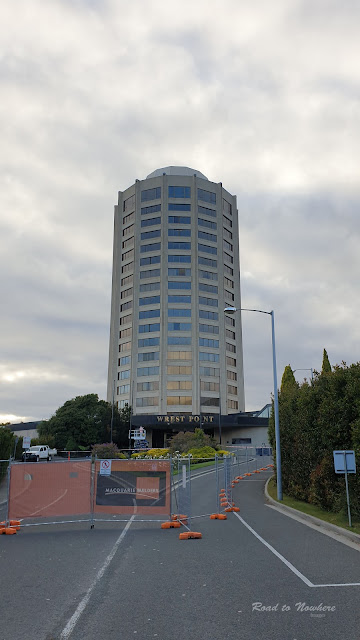