After a nice bacon & egg roll breakfast we hauled the bikes out into the carpark behind the pub ready to head off. It took a bit for everyone to get their shit together this morning but we were soon filling up with fuel ready for the trip up waterfall way. 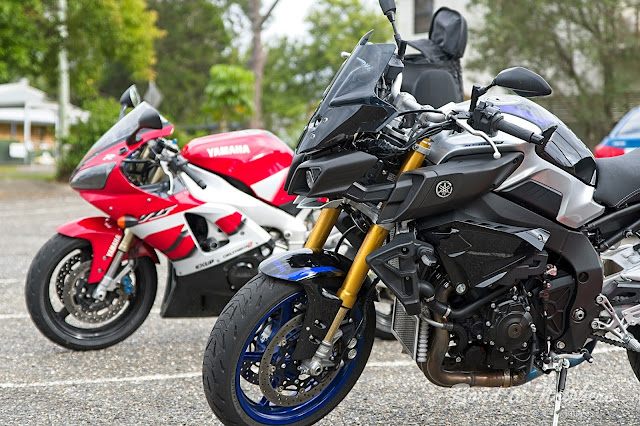 I hadn't paid much attention to todays route plan I didn't really know where I was and when we were coming into Bellingen I finally realised where I was. It was only about 15 minutes into Bellingen then out on the Waterfall way to Dorrigo. Last time we had a lot of traffic up here but today was quite good I though as we blasted the twisties up the mountain.
Stopped for the obligatory picture at the first waterfall, but let a huge truck get past, damn. Still he was easily dispatched up the mountainside.
From here we made our way into Dorrigo and then turned down Tyringham Road. Stu decided to stop as he wanted to do another different road. We then got accosted by an elderly woman walking her dog. She stood in front of our bikes and began to tell us the history of something from the war. Couldn't quite hear her with helmets and ear plugs in luckily. Stu fired up the Tuono and roared off but she then stood in front of me and Dave. Took longer than it should as we were trying to be polite, but eventually we had to just roar off as well, otherwise we'd still be there now.
A quick stop just out of town. This area is so green and lush the scenery was amazing. They obviously must get lots of rainfall to be that green. So we watered the grass for good measure just incase of impending drought.

It's a decent enough ride along through here, just need to be careful as most bends are un-sign posted and the road can be narrow and a bit rough, but not that much traffic on it so all good.
We stopped at the Ebor-Armidale road turn off as the other guys were waiting for us, probably wondering what happened thinking something untoward may have happened, but just granny attack.

The ride along the Ebor-Armidale road was pretty good for the most part until we hit a bit of road works and it got a bit rough from there and was hard to tell how fast you could go as there was plenty of potholes right in the middle of your line. We got split up along here but just out of Grafton the guys pulled over so that we can regroup.
From Grafton we took the Gwydir Highway out towards Glen Innes. The ride up the range was a real highlight. I have driven up here before with the family but hadn't ridden it. The ride was superb coming into the first 45er and letting the revs rise, cracking the throttle, sheer riding pleasure. The surface was in fantastic condition the entire length of the run up the mountain. Then after that it was some fairly flowing road that you could see some big numbers on. All great fun. 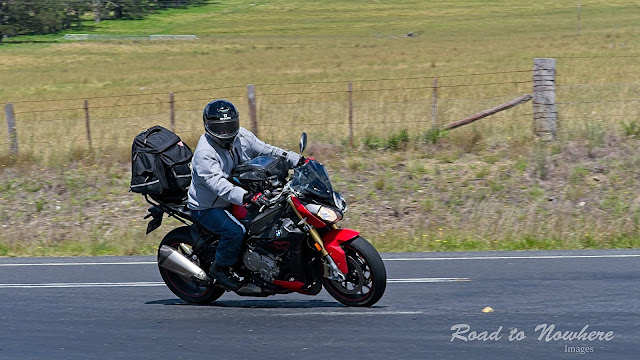 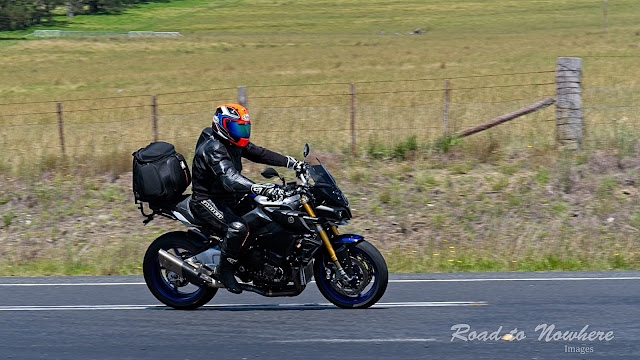 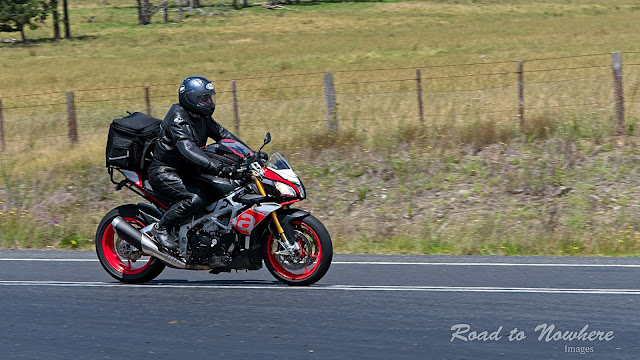 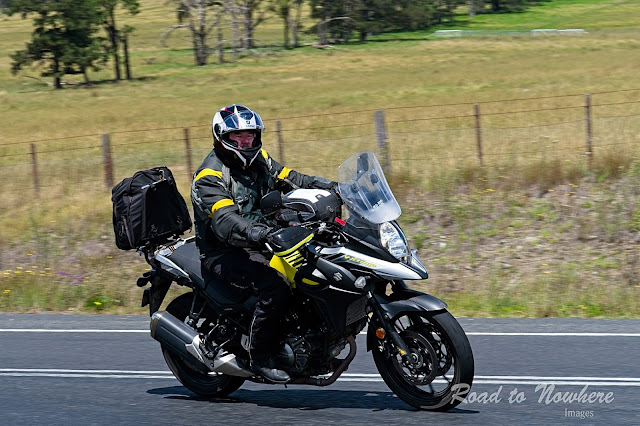 We stopped at the intersection of Bald Knob road, which Stu took affection to. I took the opportunity to take out my camera to take some shots of the lads ride in here. You can tell the difference between the phone photos and the camera photos. Chalk and cheese really even though I've compressed them heaps. 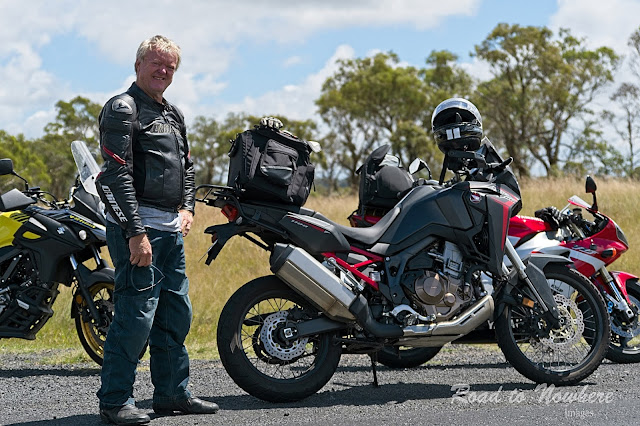 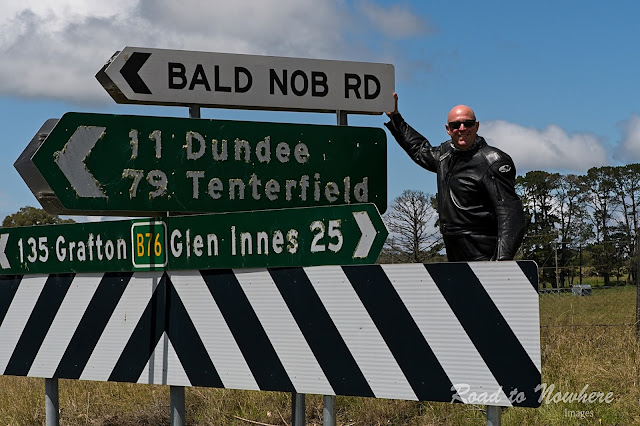 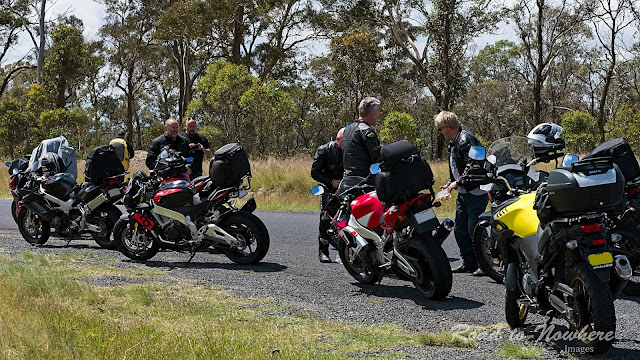 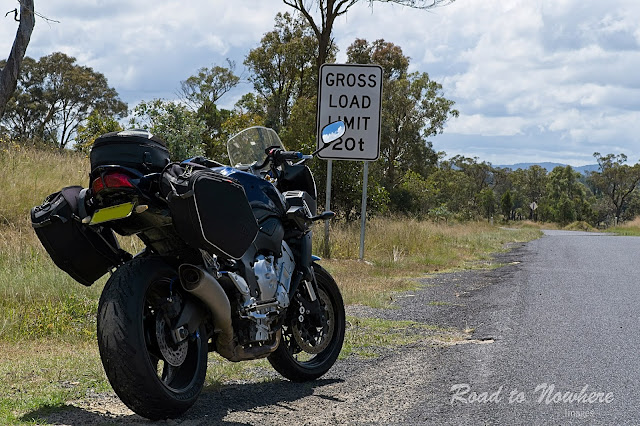 The surface on Bald Knob road was pretty dire and I had to slow down to 80-90kmh and was getting kicked out of the set like riding a rodeo bull.
It was only a short 20 minute trip to Deepwater from here where we are going to have lunch at the pub, except when we got there the pub was closed for lunch today. There wasn't much in this town either but the bakery was still open, they were just about to close. An apple turnover and iced coffee hit the spot for a smallish lunch. Bushpig couldn't help but make a mess of himself as usual. 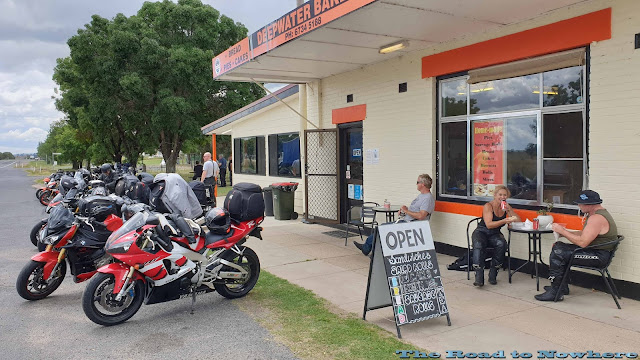 From here we travelled up to Tenterfield where we were going to pick up my brother. I saw him ride into a petrol station on the right hand side not looking at me coming the other way, too busy looking at all the other adventure bikes in there. So I continued down the road to the petrol station on the other side of town and rang him from there. He soon came back for the ride to Kyogle.
The ride down the Bruxner twisties was quite enjoyable, Flyboy came up behind when I wasn't looking and the lights on his Africa twin make it look a bit like a police bike.
We stopped for a cold beer in Drake, so forgot to take any photos here as was busy chatting with my older bro. Troy came in after we had finished and he had busted his number plate holder and indicators off the back of his Fazer. Quite an unusual thing to happen really.
We were soon in Kyogle at the bar having some ice cold beers. Another great day out on the bikes. One thing about group rides is it can be a bit difficult trying to get photos, by the time I stop get out camera the others have long gone, so I just get them when and where I can. 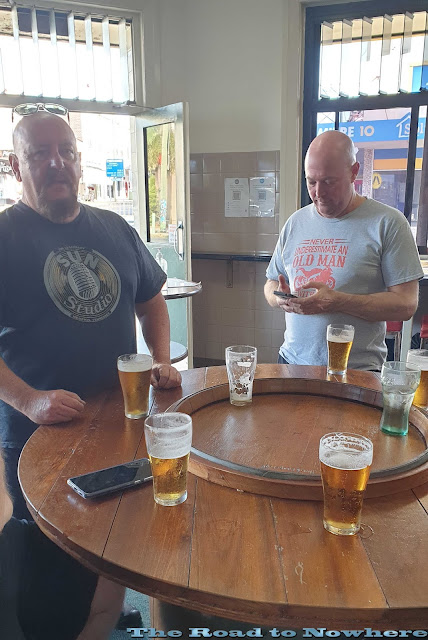