How long does a Motorcycle Tyre last?

That's an interesting question isn't it? If it isn't used that much and sits for a period of time just how long will it last and still be usable.

Back in 2014 I put a brand new set of Michelin Pilot Power 3 tyres on my R1 after we did the track day at Philip Island. It wasn't much longer after that I got my 2015 R1 and the older R1 sat idle in the garage with no use for 5 years due to being unregistered. So fast forward to 2020 and I re-registered the bike again. I used those tyres back in 2014-15 for about 1000kms or so. Then no use for 5 years.

Whilst out on the last 2 rides I had a few rear wheel slides mid corner. Did I hit gravel/oil or just coincidence that the tyres deteriorated to the point of no longer being usable? I cant be sure and with another ride coming up I don't think these tyres would have the distance in them to get another 2000kms.

So a cheap insurance policy is just to change them out for a new set so that's exactly what I did. 7 years and 7000kms from that last set of tyres, not bad.

I took the Bandit Rider/Geoff James route and went for a set of Michelin Pilot Road 5's. These should last me for another 7 years, haha. Gee the grooves in this tyre are huge, but its a slick on the edge.. 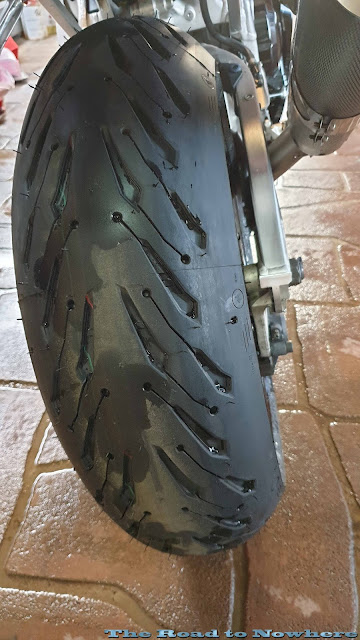