A story of Bikes, a Brewery and Australia's best Motorcycle Road

Currently we are in one of the biggest droughts in recent years, sounds great for riding motorcycles but not so much for our struggling farmers. We had a little ride organized to one of Australia best motorcycle roads, the Oxley Highway some 4 hours north of Sydney. We had 2 coming down from Brisbane, one coming up from Nowra and the rest from Sydney and Newcastle.

So the morning of the ride what do you think happened? Yep you guessed it the largest amount of rain we've had in months poured down for 2 days in Sydney. There was talk of pulling out of the ride from the naysayers(not me, I wanted it). Some even delayed leaving until the next day(soft cocks). Their loss for not riding some great roads.

Here is the weather map once I got up in the morning. All that green rain is right over Sydney and extending 2-3 hours north. Well the good news was that it was only raining over Sydney. The bad news was it was torrential with over 100mm in some spots. 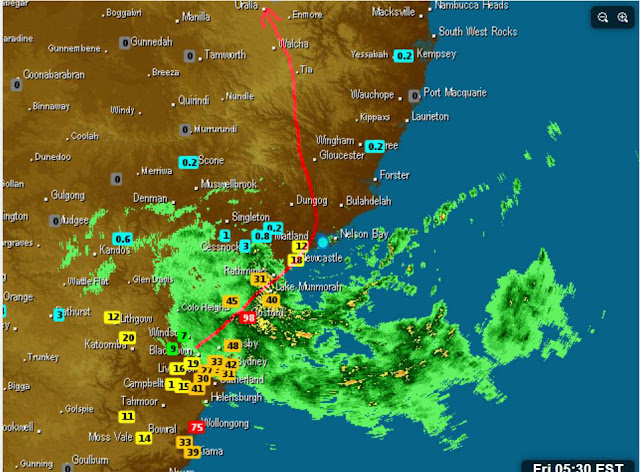 So armed with this intel I used the kids to help me do up my wet weather gear properly before heading off into the gloom and that worked quite well as hardly any water got in.

Meeting up with Dave and Stu we quickly ditched plans of riding the Putty road in the heavy rain as it would not be any fun and just a slow painful process of wet crotched misery. So we decided to take the main highway up to Maitland and try and get through the wet as quickly as we could as out the other side and on to Gloucester was all dry, and that's where the fun starts anyway. I think that's the first time in as long as I can remember wanting to take the straight highway over a twisty back road.

So we met with Jason and Troy near Hexham at the servo, but alas Troys bike was running rough so they returned home to try and fix it so we continued along in the rain until it finally broke and the sun started shining somewhere near Stroud.

The run up from Gloucester was a good one but a few bikes and cars flashed us warning of rozzers ahead. Now I'm all for the heads up about the boys in blue but not when they are like 50-60 kms up the road ffs. You got about a 10km warning area before stopping the warning flashes. Droning along at the limit for that many kms on that road is downright absurd.

We had pulled up in Walcha no more than 2 minutes before Rick and Andrew motored into view, how was the timing. They had been down the oxley today and were returning to Brisbane tomorrow, unfortunately flyboy couldn't make it with them. Something about packing his panty draw or something.

I had a nice pumpkin soup for late lunch before we hit the back roads via Kentucky on the way to Uralla and Geoff's famous culvert of 'DOOM' on our way to the Top Pub for the night. 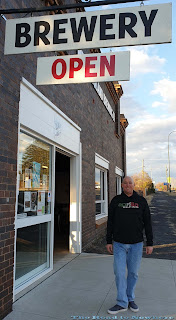 Arriving earlyish at the top pub we noticed that the New England brewery was still open, it would be real shame to not let them take our cash. It's been closed every time we've been here so today was a good day.

We tried a sampler plate of beers, my favourite was the Hop Canon IPA, it went down well and we found this delicious local smoked BBQ beef jerky. Fabulous so we stayed until about 7pm when our table was booked for diner at the pub.

The boys that stayed behind today to miss the rain really missed out, as tomorrow's rain was actually worse than today's so we got an extra days riding in.

Discussions over diner the night before surrounding today's route which were we either just do the Oxley a few times and await the remaining boys from Sydney to catch up or to head up north through Ebor and do the Waterfall way as Rick and Andrew had to be home for work on Sunday. We took the long option and decided on the Waterfall way with the Queenslanders. First stop was in Armidale for a splash of fuel and then towards Ebor.

Beautiful country scenery along here but it is so dry. The drought is clearly evident everywhere you look and go up here. I've not seen so much road kill in a long time with dead roos every few hundred metres. It was the first day of spring with beautiful blue Sky's with a flowing road ahead coming into Dorrigo, there was even some late snow on the side of the road. Sorry didn't stop to take a photos, so 2 years in a row failed to photo bikes and snow.

Coming down the twisties east of Dorrigo we got caught behind a slow moving car, I pulled over to let them all go rather than let this great section of track er road go to waste.


We stopped in Bellingen for a coffee but nobody seemed to be hungry after a big breakfast so we said our goodbyes to Rick and Andrew here. They continued on north to Brisbane whilst we turned south towards Wauchope.

Motoring down the freeway for 150kms on an R1 sure is a chore, these are the killer sections of any trip for me and usually my right wrist begins to ache due to lack of any movement. A cruise control would be bloody good here but alas maybe my next bike. I rode along for a while using my left hand to control the throttle, that's an awkward feeling trying to turn.


Arriving in Wauchope we fueled up and made our way to the cafe in timbertown, I forgot its name but motorcycle friendly but their service is so slow. About 1/2 hour later Doug, Craig, Troy and Jason arrived. They ordered big lunches, I still wasn't hungry and only had more coffee but regretted that about 1 hour later when the hunger pains kicked in half way along the Oxley.

We didn't stop at gingers creek today as it was getting late in the arvo so pushed on to get to Uralla, the brewery was calling again.

I must say the meals at the Top pub in Uralla are absolutely fantastic top notch pub grub. The spicy African lamb back strap was delicious as was the steak the night before. Discussions arose around adding an extra day to the trip, which to my surprise 5 out of 7 decided to do another night. That meant laps of Australia's best motorcycle road tomorrow yippee.

We tried a new cafe for breakfast this morning but I couldn't eat all my scrambled eggs on the sourdough toast. It wasn't quite right, the toast was too doughy in taste and texture.

We back tracked in through Kentucky and back roads down to the Oxley where we hung a right turn and continued on to Bendameer and took a right onto the New England Hwy down to Tamworth again taking a left towards Nundle. It was a cracking day for a bike ride too.

Doug must have been enjoying his new S1000R as he disappeared into the distance once we ascended the Port Stephens cutting. There was actual quite a bit of traffic out this morning including a truck on the cutting which surprised everyone due to the road being so narrow and blind along there.

We stopped again on the thunderbolts way where Craig and Jason left heading for home.

We fueled up back in Walcha before tackling the 54kms of twisty road that is the famous Oxley highway. I chased Dave down the mountain until the Mt Seaview turn off were I stopped for a break. Its hard work riding down hill fast on a sports bike, much easier on the wrists going up the hill. 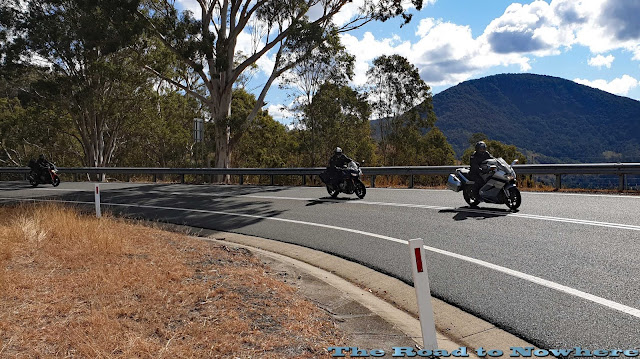 So that's exactly what we did. We turned around and raced er rode carefully up the mountain and stopped in a Gingers Creek road house. I was dying to have one of their famous burgers for lunch and it didn't disappoint.

The road house owner joked that our wife's let us out to ride for the afternoon on fathers day. When I told him we've been riding all day on a 4 day ride he almost cried.

After a fantastic lunch we got straight back into it and fanged it down the mountain for the 4th and last time. I think this is the best condition I've ever seen the Oxley Hwy in for many years. Billiard smooth, no potholes or bumps to speak of, no gravel on the corners.

We refueled again in Wauchope before droning down the freeway to our over nighter at the Coopernook hotel, another regular cheap but cheerful haunt.

We spent most of the night on the balcony with a few ales and some fireball whiskey to top it off with washed down with some pizzas. 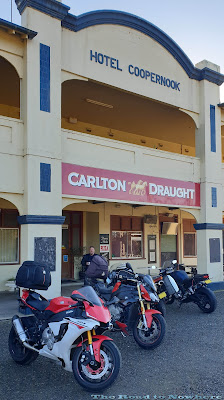 Today we were up early for the commute home. Being a Monday the roads were pretty much empty especially the back roads that we would be riding on. The chains were looking thirstier than we were the night before so they go a well deserved lube.

A continental breakfast was included in the cost of the hotel which is always good. We were ready to roll out at 8am, which is pretty good going seeing how late we were up.

More back roads this time out to Lansdowne and onto the road by Taree airport, where we slipped up more back roads to Wyndham and then on into Gloucester.

This wouldn't be a real bike ride if we didn't stop in at a bakery at least once on the trip. So Hebbys bakery in Gloucester was our morning tea stop of choice. The pies here are excellent by the way washed down with a cappuccino hits the spot. It's a wonder how I can still fit in these leathers.

We then fueled up at the servo and it was here that we got a call that Doug's bike wouldn't go. Now that's strange being a brand new BMW so we headed back down to the shops. True to its word the beemer wouldn't start. Eventually it fired after the tank was opened. It must have had a fuel pressure lock in the tank or something. Very strange to say the least.

Doug and Troy headed back from Stroud via the Buckets Way and the freeway but Stu, Dave and I turned off towards the Gresford goat track via Dungog and on to Singleton where we would tackle the Putty road during a week day. 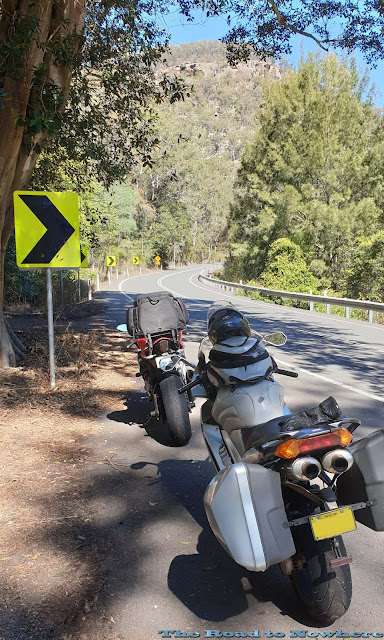 We stopped for fuel in Singleton before heading down the putty, stopping in briefly at the rest stop at the start of the 10 mile for a break and drink.

It was perfect conditions for a ride through the 10 mile today with very little traffic. 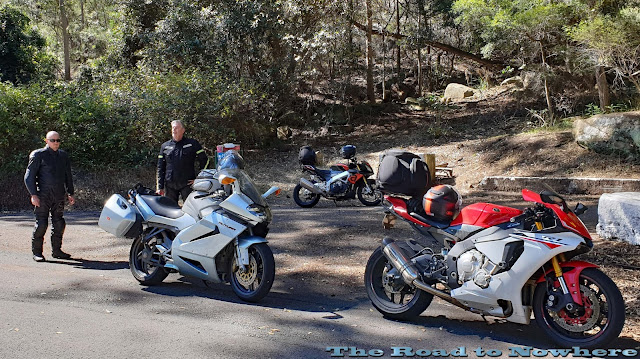 We even managed to get home by 3pm and beat all the peak hour traffic so that was a bonus.
It was a fantastic 4 days away riding with da boys. Thanks heaps lads and can't wait for the next one in November. Right after Motogp.