It was beginning to feel like we had been on the road for the 12 days I was getting tired and the others looked it too. We got off the boat and stopped to gather everyone together. It took a few minutes before we were all together again. I think I was all photoed out by then as I didn't take any photo's. The shot below is supplied by our fearless group leader. Thanks Dougie. 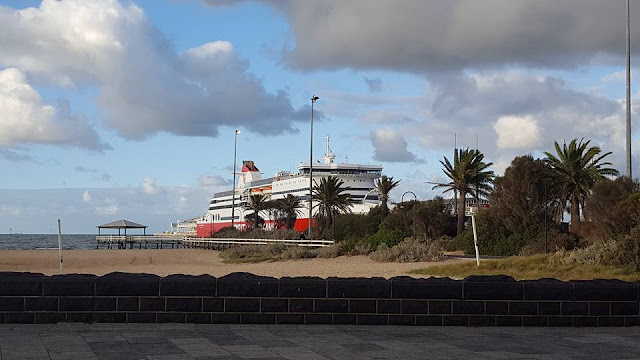 Disembarking the Spirit of Tasmania was the easy part. Heading straight out into Melbourne's peak hour traffic was going to be the difficult bit. And I wasn't wrong there we stopped 2 or 3 times within 2 kilometres to consult google maps after a couple of uncertain turns. I wasn't offering to lead here cause I had no idea where I was going and I hadn't even been bothered to look at a map to see where we should be going. East and North is about all I knew.

Turns out that's where we went whether or not it was by luck or good management I can't be sure. At one point I found myself leading and turning off the free way with 2 options north or south with me slowing down but no one offing to come up and take the lead, so I went north and everyone followed. Not sure this was right but we eventually went the right direction.

We stopped in a bakery at Lilydale for some breakfast before we retraced our step from day 1 & 2 almost to a tee. We headed through Warburton and back up the Reefton Spur. I can confirm that riding up the spur is much better than riding down it, as you are not on your wrists the whole time.
Doug rode at the back of the group as his bike had been playing up since yesterday just after Rosebery, it was losing power making riding the real twisty bits difficult. The spur must have been hard work for him. 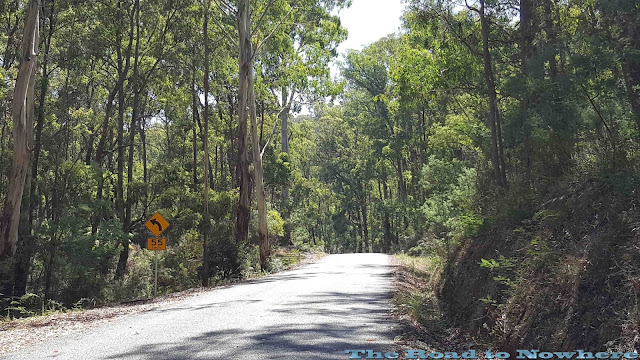 As we got close to the Eildon - Jamieson road turn off, Doug said he would meet us in Mansfield and bypass the twisty bit as the bike wasn't working well in the twistys. Well that's a real bummer.
Now that we knew what the road was like we had a pretty good run through the Jamieson road. The first part had quite a bit of leaf litter over the road and I had a couple of front end slides on them but after about 20 minutes it cleared and we had a sensational run to the lookout. 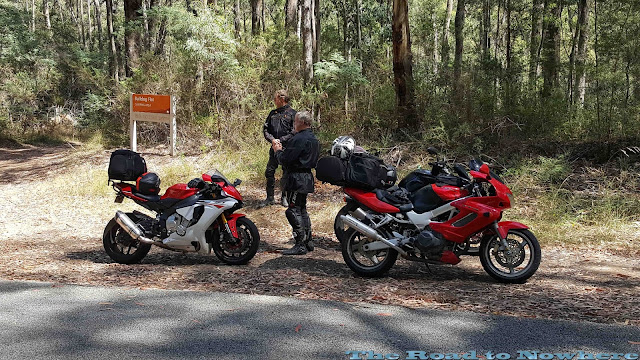 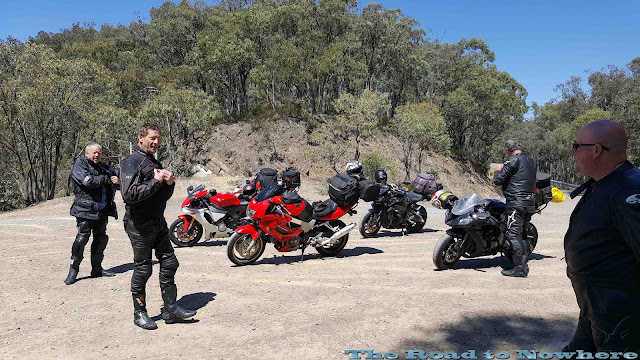 Stu had been waiting for us at the look out for about 15 minutes as we stopped earlier for the above photo's. The picture from the lookout today was much clearer than it was when we came down. We picked Doug back up again in Mansfield. 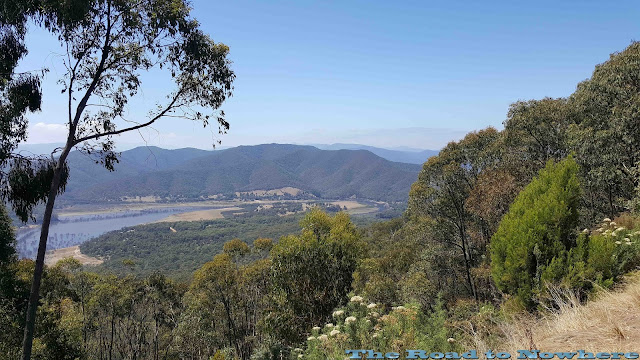 We had another brilliant run over to Whitfield with plenty of spirited riding taking place. We stopped in at the Whitfield Hotel. I wasn't ready for a beer yet so we hit up the Whitty cafe. The owner suggested Iced Coffee's which we agreed was a great idea, it was a hot day today and they were fantastic.

Geoff and Bruce decided they'd like a beer instead so they stopped at the pub. We parked the bikes out the front so they would be in the shade. 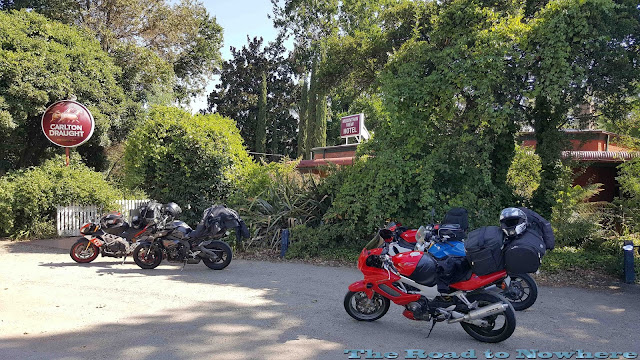 The ride back into Myrtleford was quite boring and I was thinking that I was going to fall asleep, lucky then I didn't have a beer as that would have made it worse. Stopping in Mytreford Stu, Dave and Myself decided we'd like to ride through to Bright and then do the Tawonga Gap and then come back up to Dederang from the south rather than take the Happy Valley Road. I followed Dave across the Gap and and it was fantastic fun, this is one of my all time favourite roads.

We were soon in Dederang after about 20 minutes and back to the Dederang Hotel, again in the cabin out the back.


I'm not sure that finishing a long trip like this on day 13 is a great idea, when riding motorcycles one should not poke the superstitious road gods in the face. Again today's ride was also going to be the reverse of the first day. We fueled up in Tallangatta and then headed up over the Granya Gap and onto the Murray River Road. This was another fantastic ride along the river until we turned off at Jingellic and up to Tumbarumba. There was quite a lot of road works along this bit of road, I didn't remember being this much on the way down, seems like they were ripping up lots of the road. It would be nice when they finish it.

We stopped in Tumbarumba at the bakery(again) for a spot of lunch and coffee's. Rather than ride all the way out to Rosewood we took a more direct approach and took this nice little back road that cut out about 20km's of boring bit and it spat us out right onto the Broadleaf Park Rd and up through the pine forests. 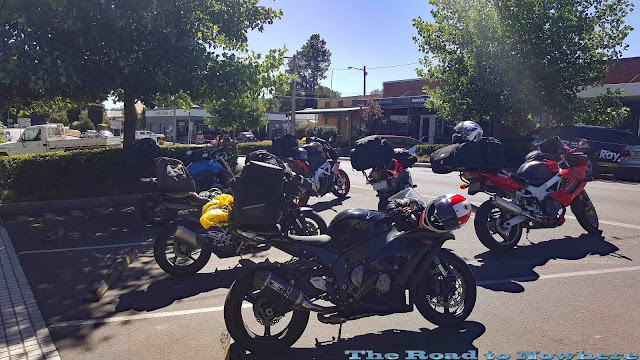 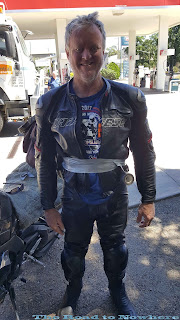 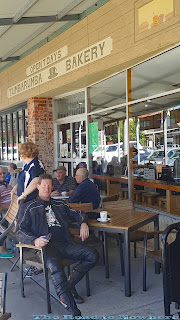 We were soon in Tumut for a fuel stop and a drink of water as it was quite warm today. Geoff's zipper had broken on his jacket and he was wearing his rain jacket over the top of his leathers for the last 4 or 5 days. He got sick of that and just wrapped duct tape around his leather jacket. Pity we didn't tape his arms up as well.

The pic below was the last time we would be all together at the same point on the trip. I put my sheepskin back on the the long boring bits coming up. After we got on the Hume Highway aka Highway Patrol central the guys were riding off at a blistering pace. There was now also very strong crosswind that was also battering us about. Must have been 40-50kmh gusts. It was very tiring riding along here and by the time I pulled in at Marulan for fuel there was only Dave getting some fuel. He said Geoff had pulled in at Goulburn and Stu pulled in at Yass and Bruce had stopped for fuel at Gunning. Talk about getting split up. 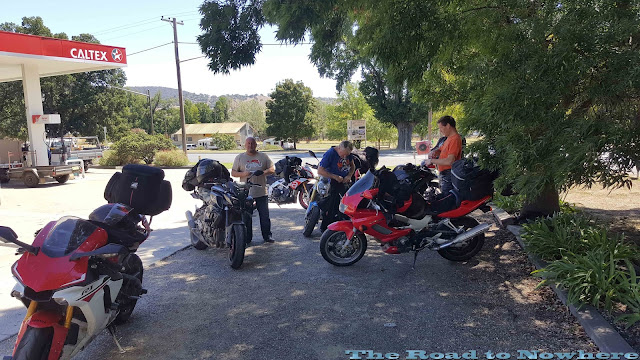 Rain was predicted for Sydney by 6pm so I got underway again pretty quickly just after Dave had left. About an hour and a half later I was pulling into my drive way with a severe case of sore ass and I was exhausted. A few minutes after getting home it just started to rain so it looks like the timing again was spot on.

Looking at my rear tyre it was pretty well shot. It was down on the wear markers and the centre was now starting to get cracks in it. The Bridgestone S21's are a fantastic tyre, with great grip and superb handling. The tyre has done 7,707kms since I put it on last November which is pretty good out of a sports tyre.

It has done 2 tours, the Vic High country tour at the end of last year and this Tassie trip, I wasn't sure if it was going to make it back but it all worked out well. This Tassie trip was around 5400km over 13 days, although 2 of these were technically non riding days when we were at the World Super Bikes.  It's now time for a full service on the bike, tyres, chain+sprockets, oil & filter. 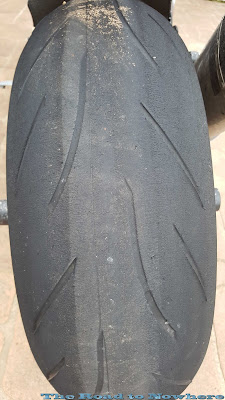 Thanks for reading, hope you enjoyed the trip as much as I did.