Checking the weather for today it said rain, heavy rain. Consulting the radar it gave a grim picture. Mmmm riding in that sounds rather unappealing. The rain was coming in from the northwest heading in a south easterly direction. So two options for today.

Sit in the pub and drink all day or head east away from the rain and hope for the best. Despite Geoff's protests that the pub needed us we headed east to try and out run the rain. We left our bags behind so we could ride un-encumbered but did take our wets in Stu's Tank Bag. I forgot to put my gopro in today so only got some photo's for today's ride.

Taking the scenic route out of Deloraine we saw our first police car had stopped someone and was giving them a talking to, better them than us I say. It wasn't long before we arrived in Launceston and refueled and then took the A3 Tasman highway out of town towards the east coast. The road slow wound its way up into the forested mountains out east of Launceston. The road here was in need of some repairs was was still great fun. A lot of the tight corners had banking on them assisting you hook into the turn. Fantastic riding. 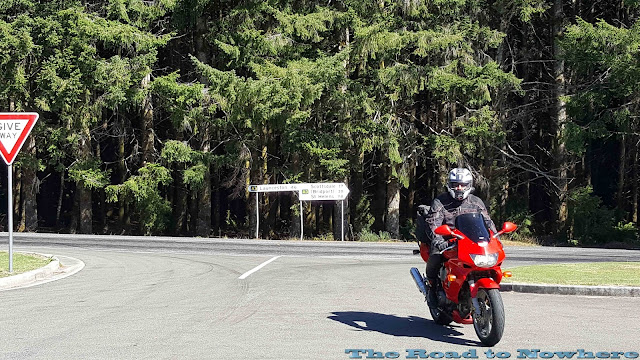 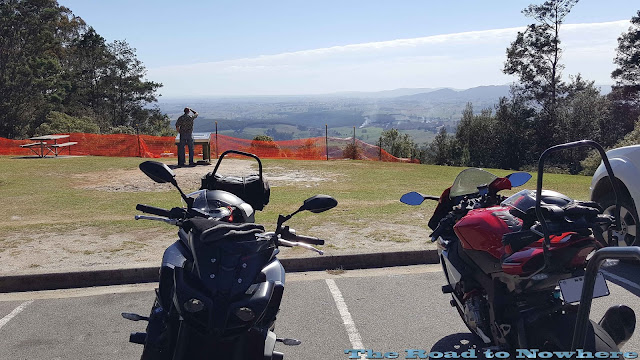 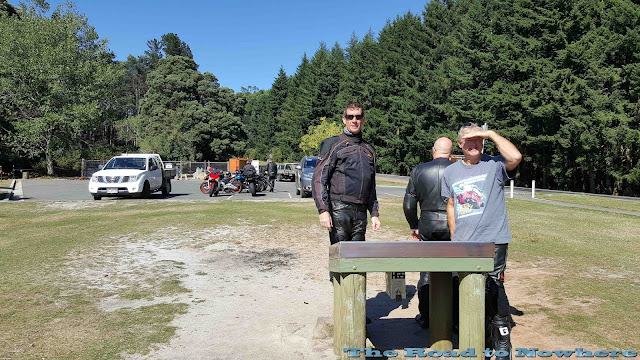 We stopped in at the Sideling lookout, beautiful views of the valley below and surrounding scenery with Scottsdale in the centre distance. There were a few fires down below and it was a little hazy, but for predicted heavy rain we were doing very well with sunshine and perfect conditions. Doug said"Shit" We all looked and he had lost part of his rain suite off his bike. Bruce said I saw something on the road about 2 km's back. Doug remounted and went back and found his rain suite intact as well. It hadn't been mangled by any cars yet. 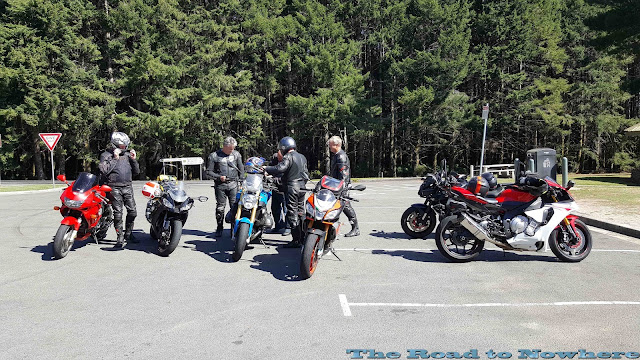 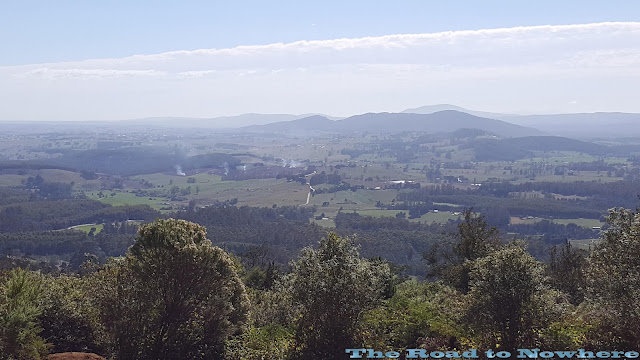 The last 8km of winding road down the hill from the lookout had gravel all over it which was a bummer as it would have been great riding at normal speed. The scenery all around was spectacular. We passed a Lamborgini and McLaren going the other way, it looked like they were out having a bit of fun as well. 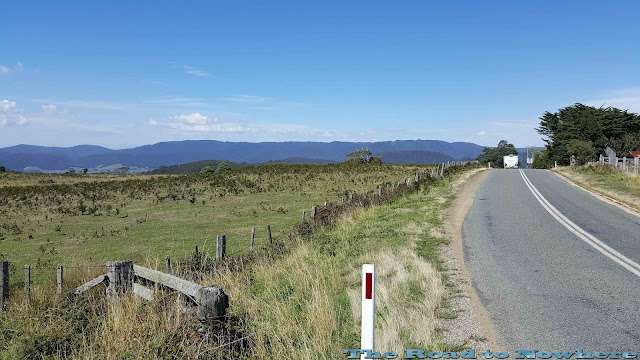 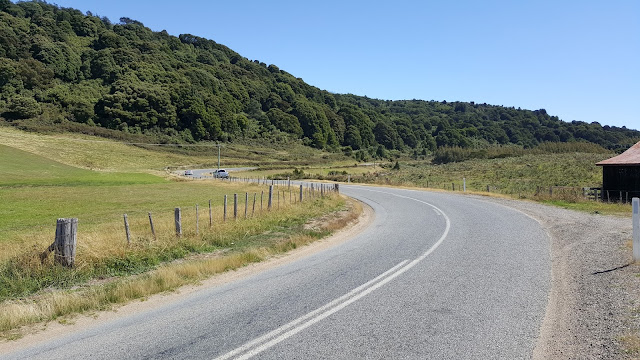 We stopped along the way as we got separated again, so I took a couple of pics whilst we waited. The other guys arrived in a couple of minutes. Turns out Doug had been stung on the elbow by a bee that went up the sleeve of his jacket, incredible really. Dave also got stung by a bee on the trip so that made 3 of us in a couple of days. They also have those huge bumble bees here similar to the one's we saw in New Zealand last time. I never seen some many bee's before, we certainly don't see this many on the mainland. 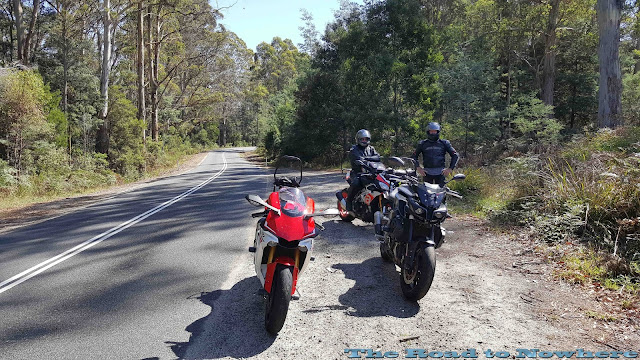 We stopped in for fuel at the roadhouse near St Columbia Falls and it was right on lunch time. I'd been here previously on other trips and I knew there was the famous Pub in the Paddock just a short distance from here. I suggested we visit the pub for lunch and there wasn't any arguments against that suggestion so that's what we did.

You couldn't miss the Pub as there was a huge Beer sign on the side of the road at the entrance but somehow Geoff managed to ride straight past, Dave had to chase him down. Not sure why he couldn't smell it, he was that close.  It was a dead end road that went up to St Columbia falls so he would have to come back eventually, about 5 minutes later he rode back into view.

I ordered a grilled chicken sammich which was fantastic, it hit the spot just right and wasn't too filling. Looking around the bar area they had hundreds of pictures on the walls of motorcycling groups pictured outside the pub. I noticed Charlie Boormans photo amongst them.

We met a local rider on a ducati and spoke with him briefly about the roads in Tassie. He told us "You have to do the Lake Leake road it is a stiffy inducing ride". Now that is setting the bar high. 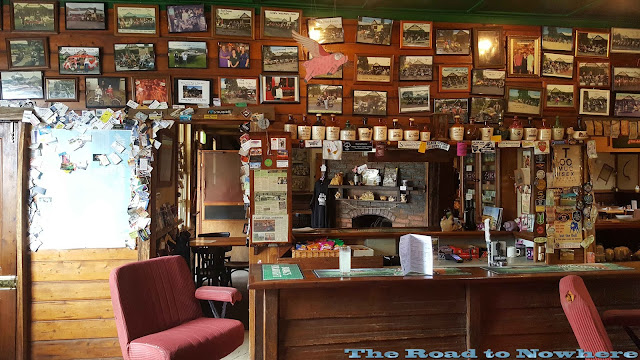 The pub is a popular tourist spot and it's also a popular bikers stops as well. We parked the bikes under the shade of the shed, by the time we came out from lunch there were a lot more bikes in there as well. The pub is also famous for their beer swilling pig Priscilla. I found out Priscilla had died and now they have Priscilla II as a replacement. There is a little shrine in the pub that was cornered off to everyone and it had an urn with presumably Priscilla's ashes and photos. 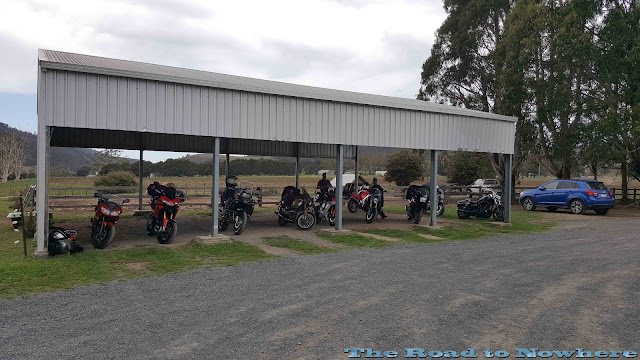 We could see dark clouds now starting to come over head and to the south, we'd been lucky so far with dry roads and blue sky's, however the western side of the island was copping a hammering in rainfall, we had been outrunning it for the time being and hopefully that will continue. We were still travelling to the east down to the coast.

We rode the short distance down to St Helens which we simply passed through on our way to St Marys. There were some dark clouds ahead in the mountains where I was intending on going, or we could take the road down the coast which was clear. We consulted the rain radar and it was clear so I made an executive decision and we headed up the St Marys pass, a superb set of twisties that was over way too fast. 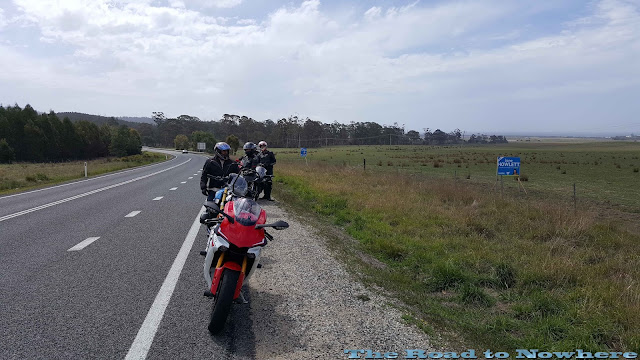 We stopped briefly in St Marys to consult google maps. I would have liked to ride down Elephant pass but it was getting late in the afternoon now and the guys wanted to get back to Deloraine. Oh well we missed a great bit of twisties but they don't know that.

The road from St Marys across the Esky highway was more or less just boring straights and bits of curvy road. There was some road works to negotiate where they had put down lime and then just watered it. The bikes got covered in crap. We turned onto the main road between Launceston and Hobart called the Midlands highway. This was straight and boring and with lots of traffic. Luckily we were stopping off after 10kms at Campbell Town for fuel then turning up back roads to Deloraine. 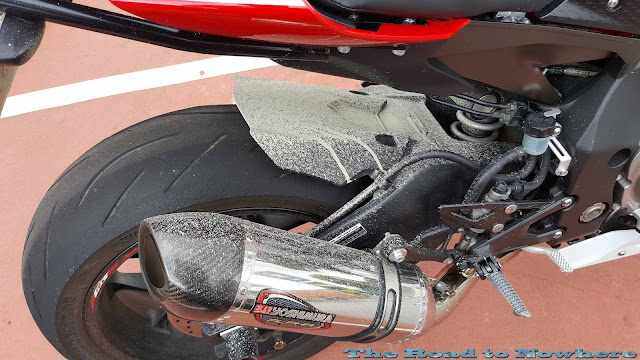 Doug had the great idea to tub the bikes with the car window washer at the petrol station, it worked a treat to get most of the heavy crap off the bikes. My brake light and number plate weren't visible.

On the way back we took the C522 back road out to Cressy which is in the top 50 rides in tassie. We were heading in a north westerly direction and there were huge storms coming over the highlands in  that direction. The clouds were black and green with flashes of lightning. I was leading here and kept upping the pace to try and get around the top of the storm before we got a hosing and it was working. The road would turn west towards the storm so I'd speed up and it would turn north again getting around the storm so I'd speed up some more, this repeated several times.

Three off us were thinking the same and the other three decided to stop and put their wets on. They ended up getting an absolute hosing for 5-10 minutes whilst we out-rode the lighting storms and made it into Cressy dry as. However we stopped in the petrol station and put our wet weather gear on as it was looking bleak still. As we finished the others just pulled up.

Riding out of Cressy heading to Deloraine we encountered a few small showers not much really about 5 minutes worth, my boots and gloves didn't get soaked so there mustn't have been much in it as luckily we skirted around the edge of the really heavy stuff. I noticed that all the little tiny towns that we went through had interesting looking little pubs right along the roadside. It would have been good to be able to stop at these and check them all out, but then it might take 3.5 years to tour around Tassie.

Yet another fantastic days riding in Tassie and for a day predicted with rain we actually hit less than 5 minutes worth with some good planning. So it was back to the pub for more beers.