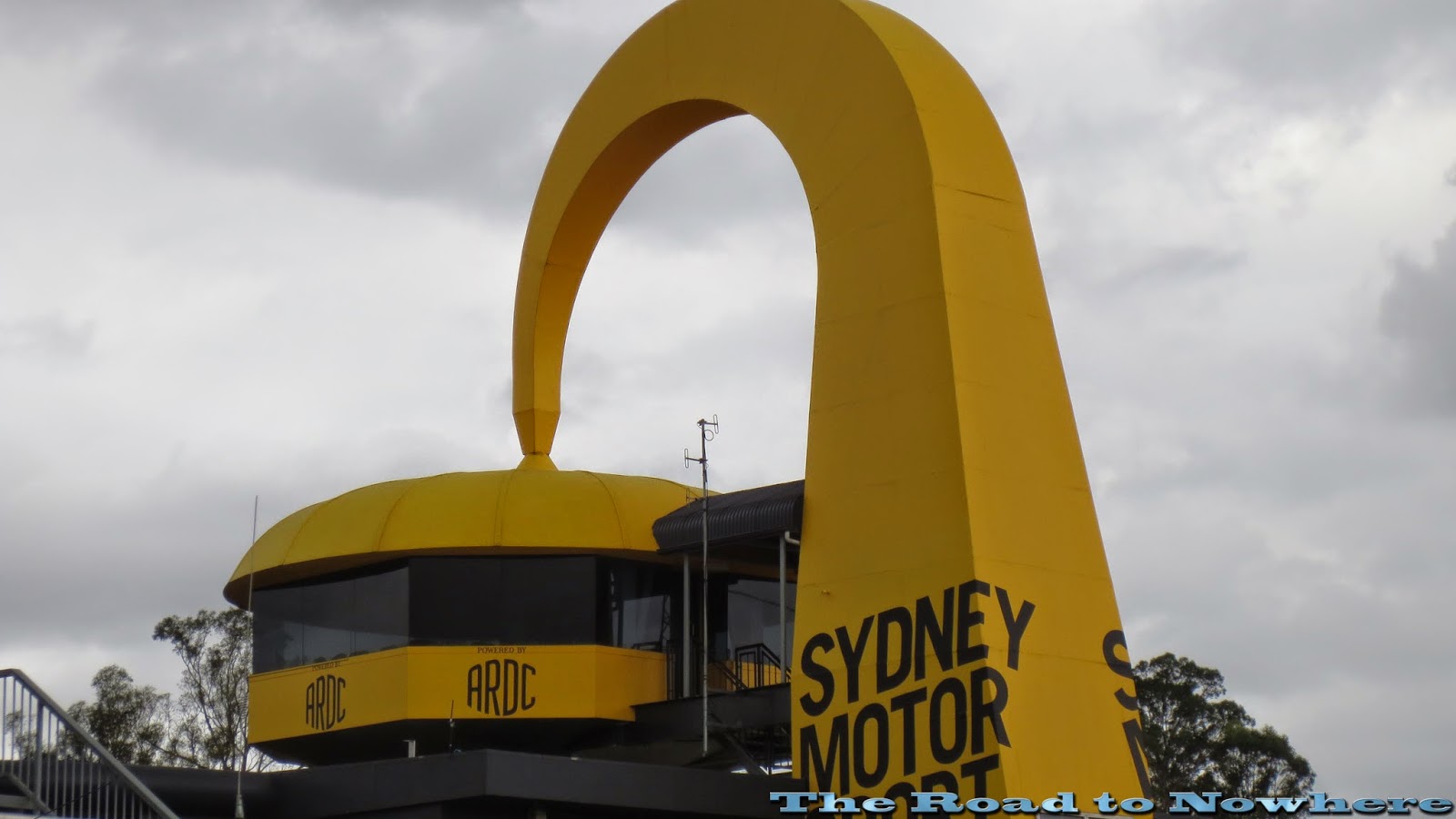 We were greeted at the gates at the back of the pits by one of Sydney motor sport parks officials. He stopped us and our trailer load of bikes. He looked at us then looked at the bikes then with a grin said "A pair of widow makers, good luck gentlemen" before ushering us through the back of the pit lane to where Stuart was waiting for us in pit garage 13. Oh is that an omen or what? 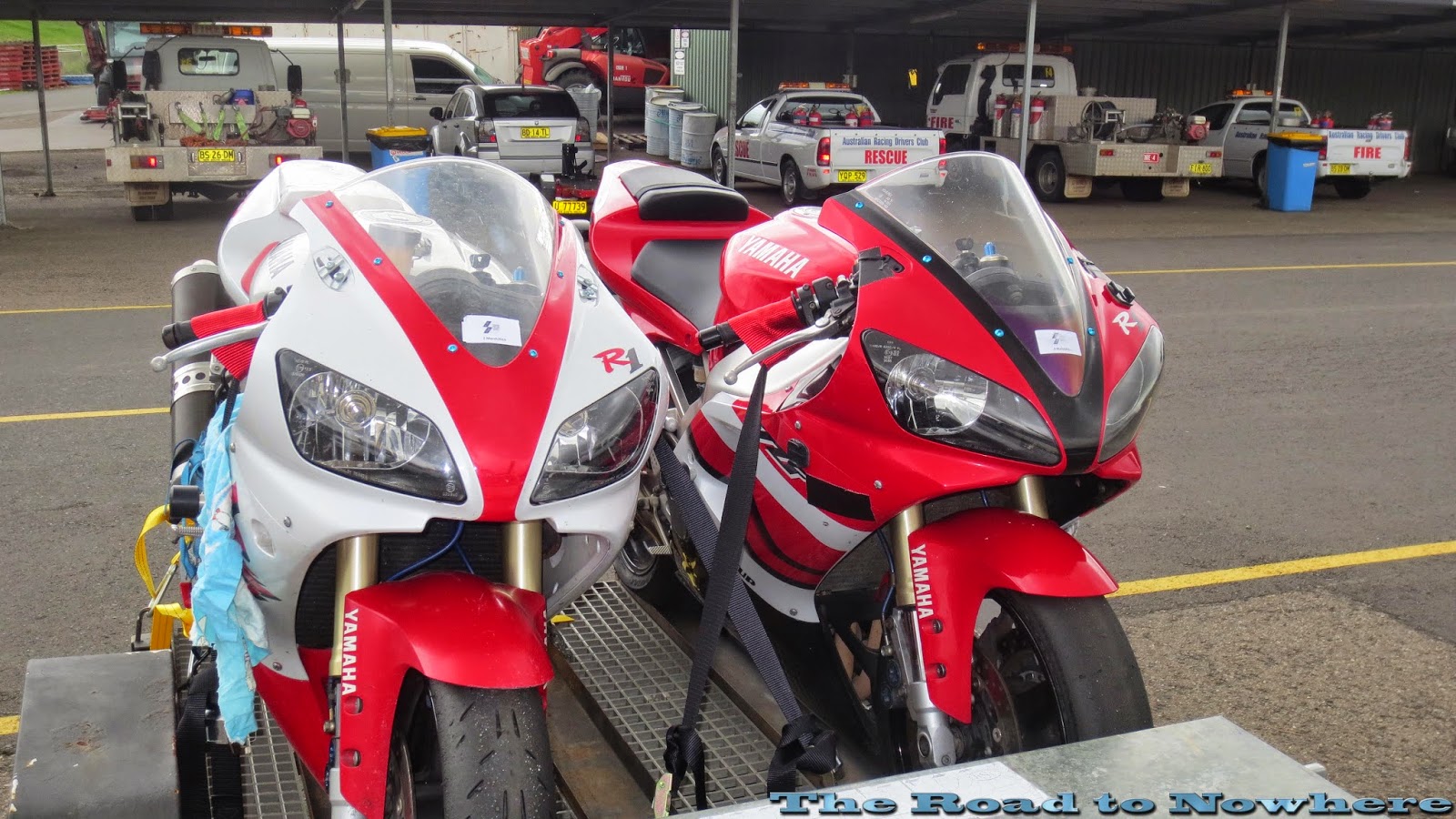 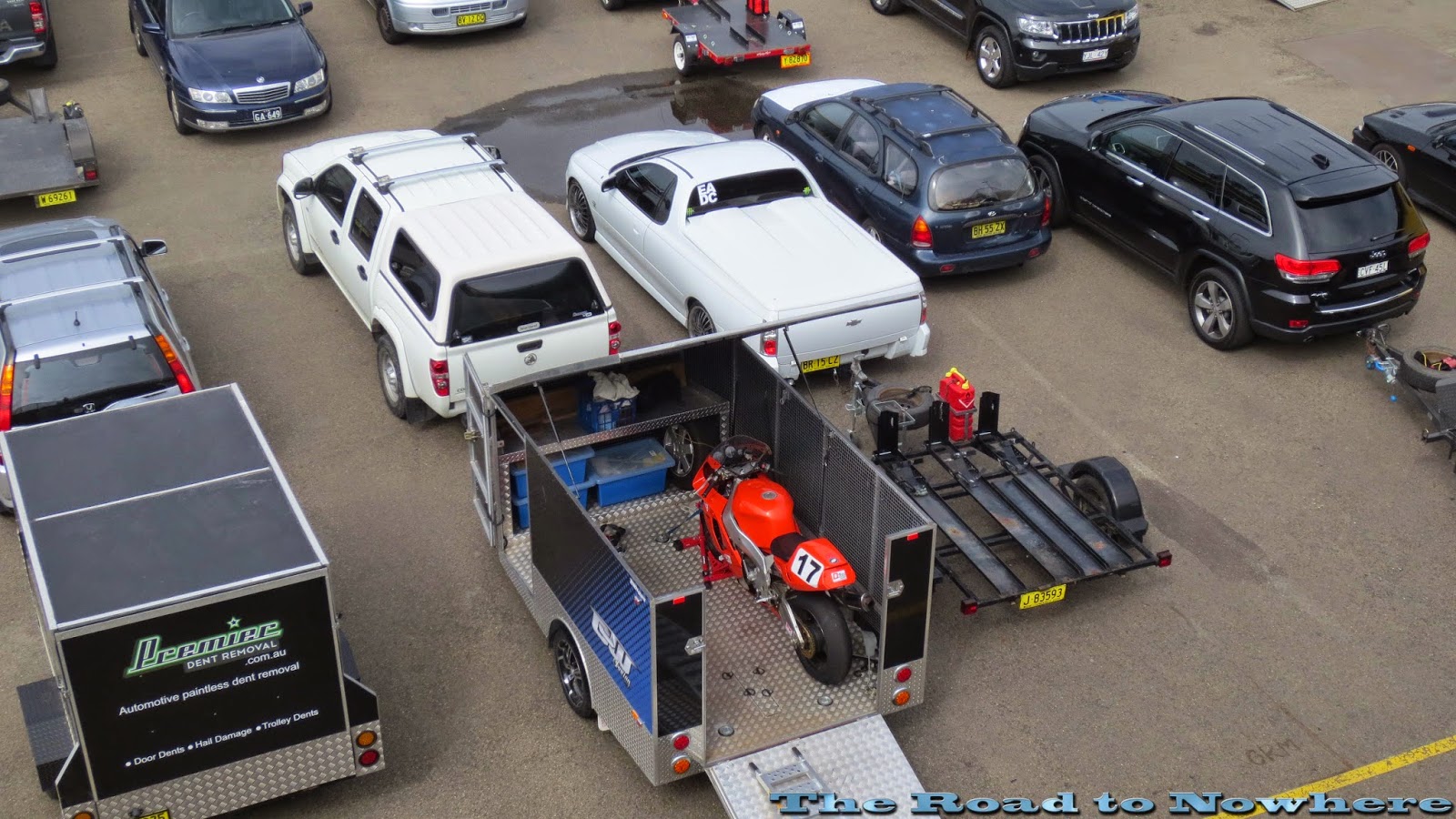 We unloaded the bikes and took our places in the garage tyre warmer on and waited for our turn on the track. We had entered into Red(Fast) group again, and at the riders briefing they announced that all groups were full and that there were a large number of racers in red group today. That's good because that means they know what their doing. 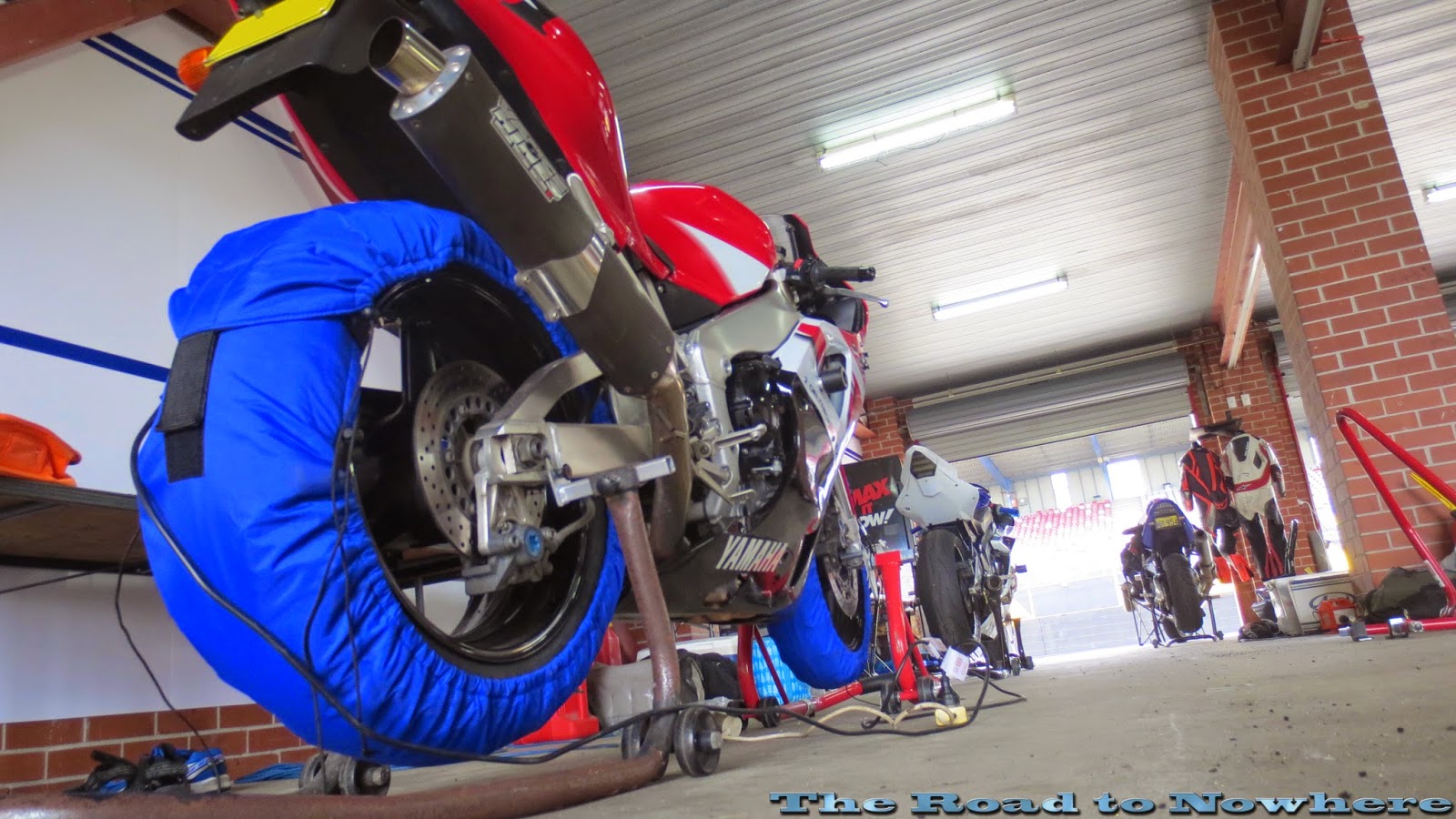 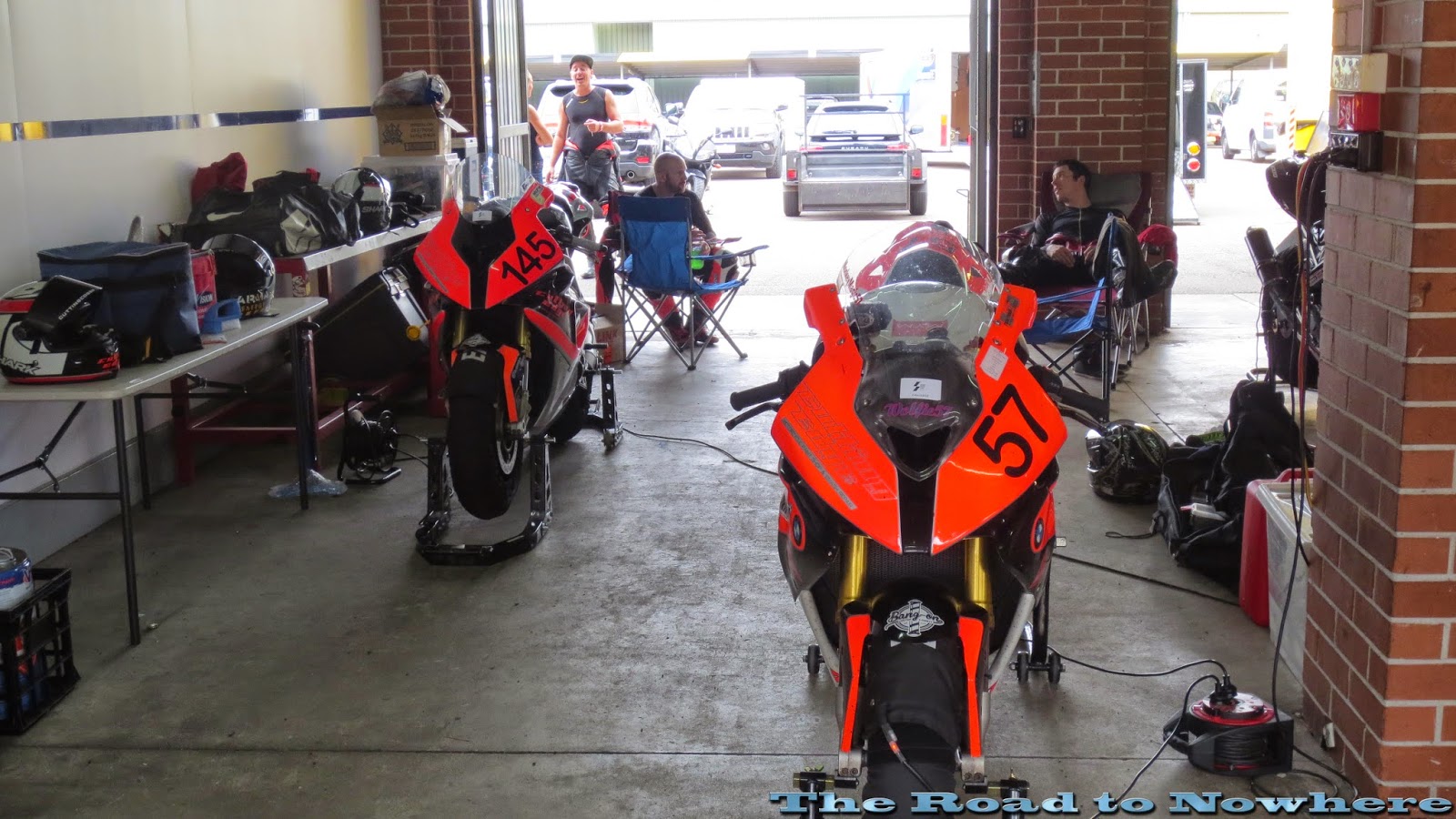 We shared the garage with a few of the race bikes. A good bunch of guys and friendly too. There were a few too many in our garage I thought but it still worked out ok.

Bushpigs mate Paud had booked in as well, nice guy and very fast on his Ducati 1098 although he had a flat battery before the day even started. Then Bushpigs R1 wouldn't start, flat battery as well. It didn't help when he got me to hold the temporary wires on the bikes battery terminals when he proceeded to mix the positive and negative terminals up on the car battery. Lets just say there were sparks and those wires got hot very quickly. Good to see he's keeping my thoughts on sparkies quality workmanship well and truly alive. What was I saying about being in garage 13? 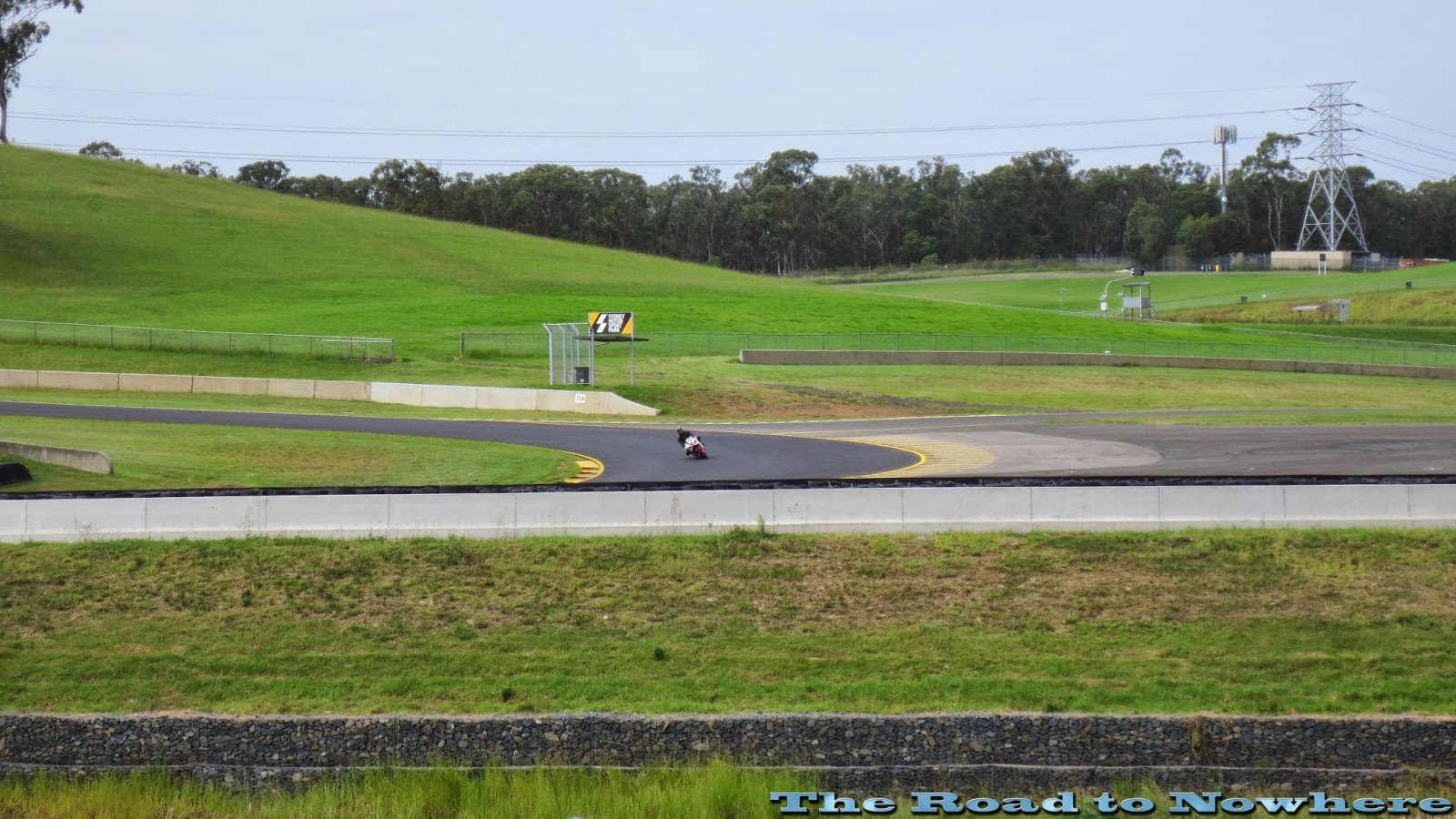 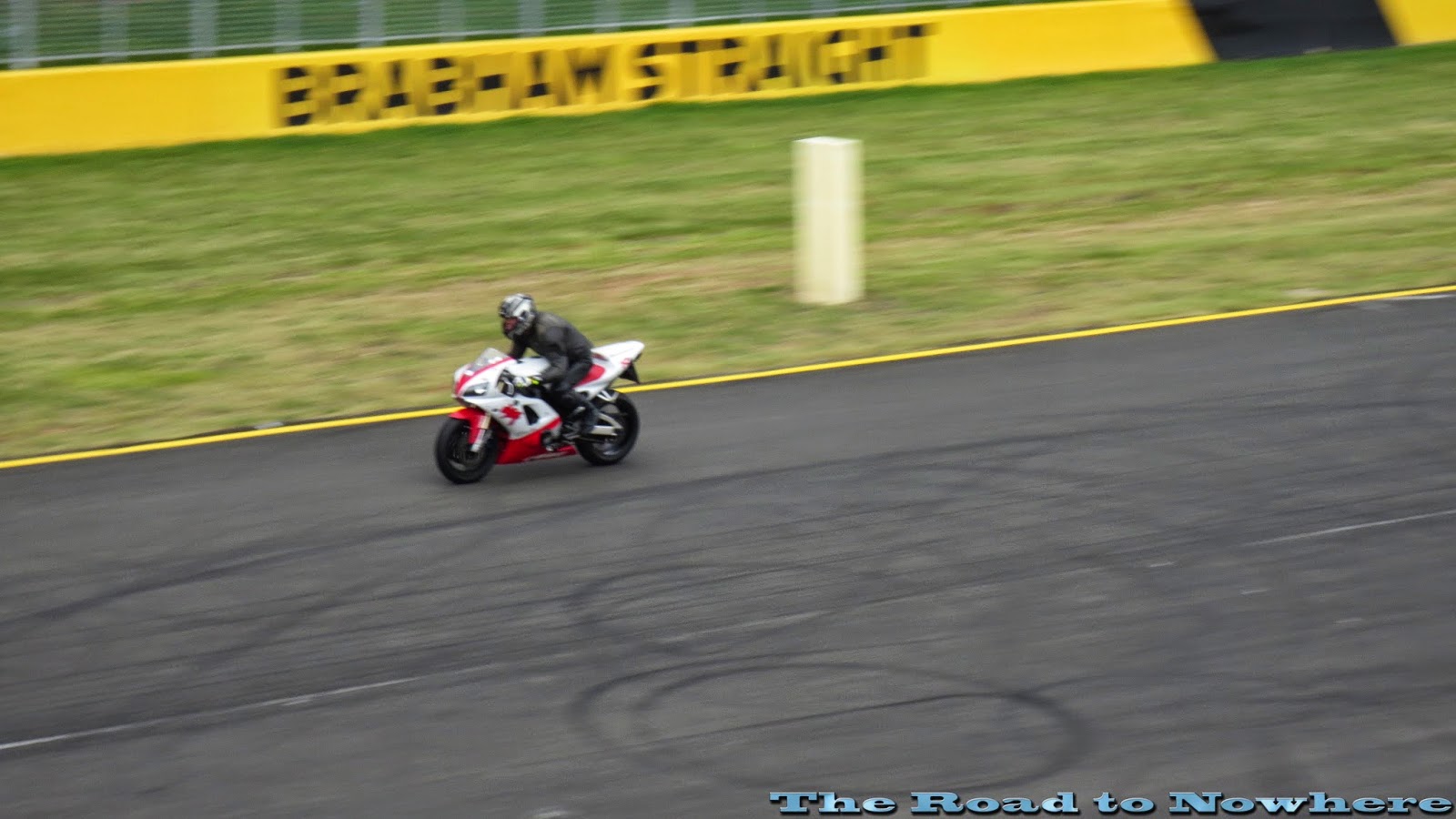 We finally got out on the track and were having a blast. When I came back in I overshot our garage and rode down near the pit exit, where one of the officials came up to me and said ah you on the old R1, you were going to slow you'll have to drop down into the green group. He said if your quick enough later in the day you can go back up again. Yeah right! What ever......

Well needless to say I copped  shit from Bushpig and Stewie all day about it, and more than likely until I die. Stewie suggested that they must have mixed up which R1 was actually the slow one. I agreed.


Dropping down into the green group wasn't all bad as I was even more determined to ride better. First 2 laps out I passed lots of bikes. I was the passer not the passee this time around. Although it was a lot more scary riding in that group as a lot of the riders were taking unexpected lines and suddenly slowing mid bend. It was interesting thats for sure and that was the second fast group.

On my fourth time out on the track I had stopped at the pit exit, then was waved through but as I was about the nail the throttle one of the SMSP officals started yelling from behind. Very lucky for me I stopped to see what he was on about. He pointed to my tyre and asked how much pressure I had in it. I looked and it was almost flat. BUGGER. Damn you garage 13! Thank my lucky stars he saw that at the last minute otherwise I would have been on my arse on turn2 in no time flat. Thanks mate.

I went back into the tyre garage to get it checked. As it turned out the o-ring under the valve cap had come out and pushed down the valve core and deflated my rear tyre. It was quickly fixed up but I sat out the rest of the session. Had a good chat to the tyre tech about pressures and explained to him I was having trouble into turn 1 with not being able to get the bike turned and hold a line. He suggested dropping the pressures for the bridgstone to 32-33 front and 24 rear. I was running 34 front and 29 rear. So i dropped them to 33 front and 26 back. What a difference it made, to the tune of 5 seconds a lap. It was so much better. These slicks are really affected by pressure, even by 1 psi. Who would have though that 1 psi would make so much difference? The rear tyre felt like it was glued to the track. 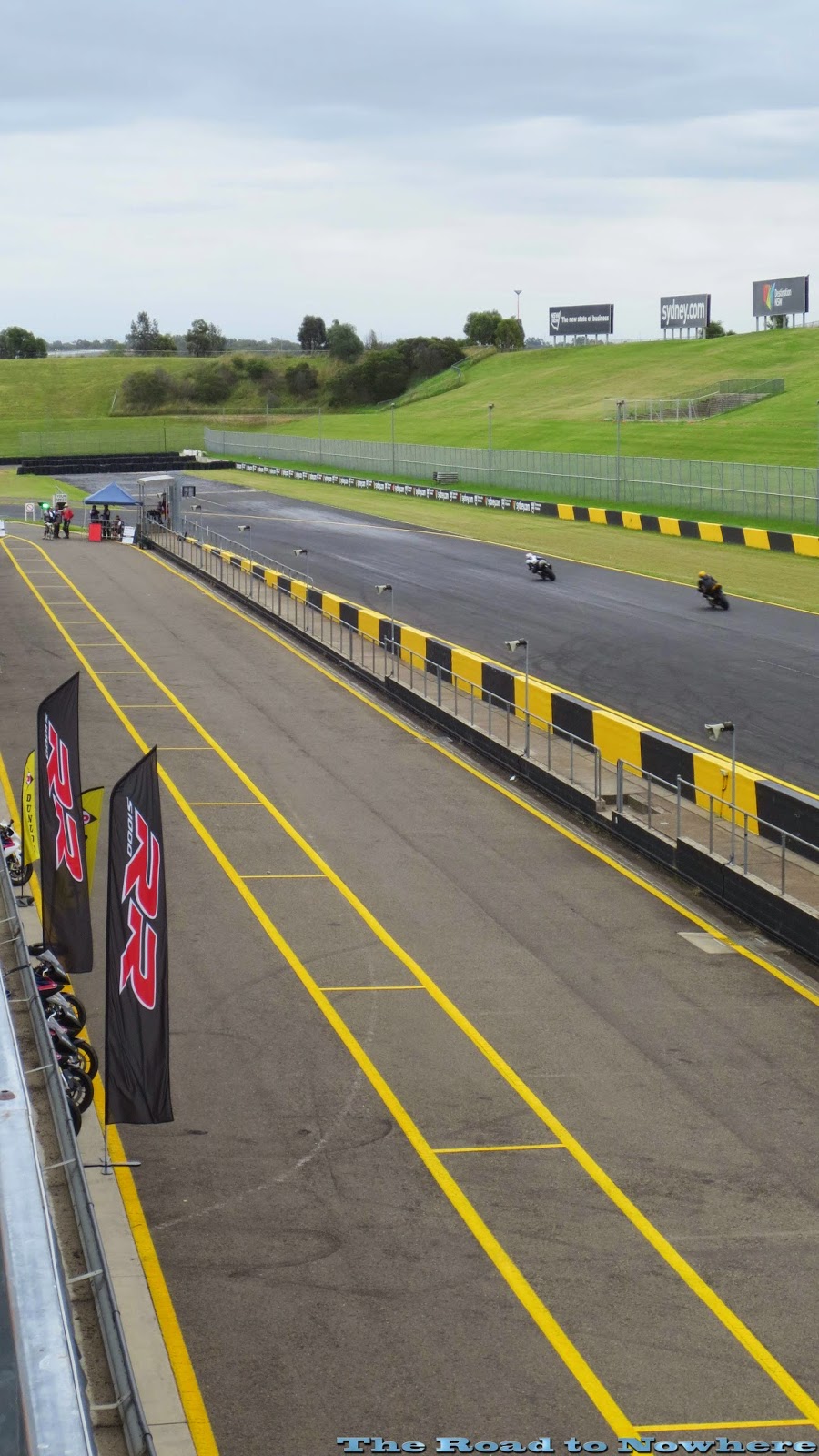 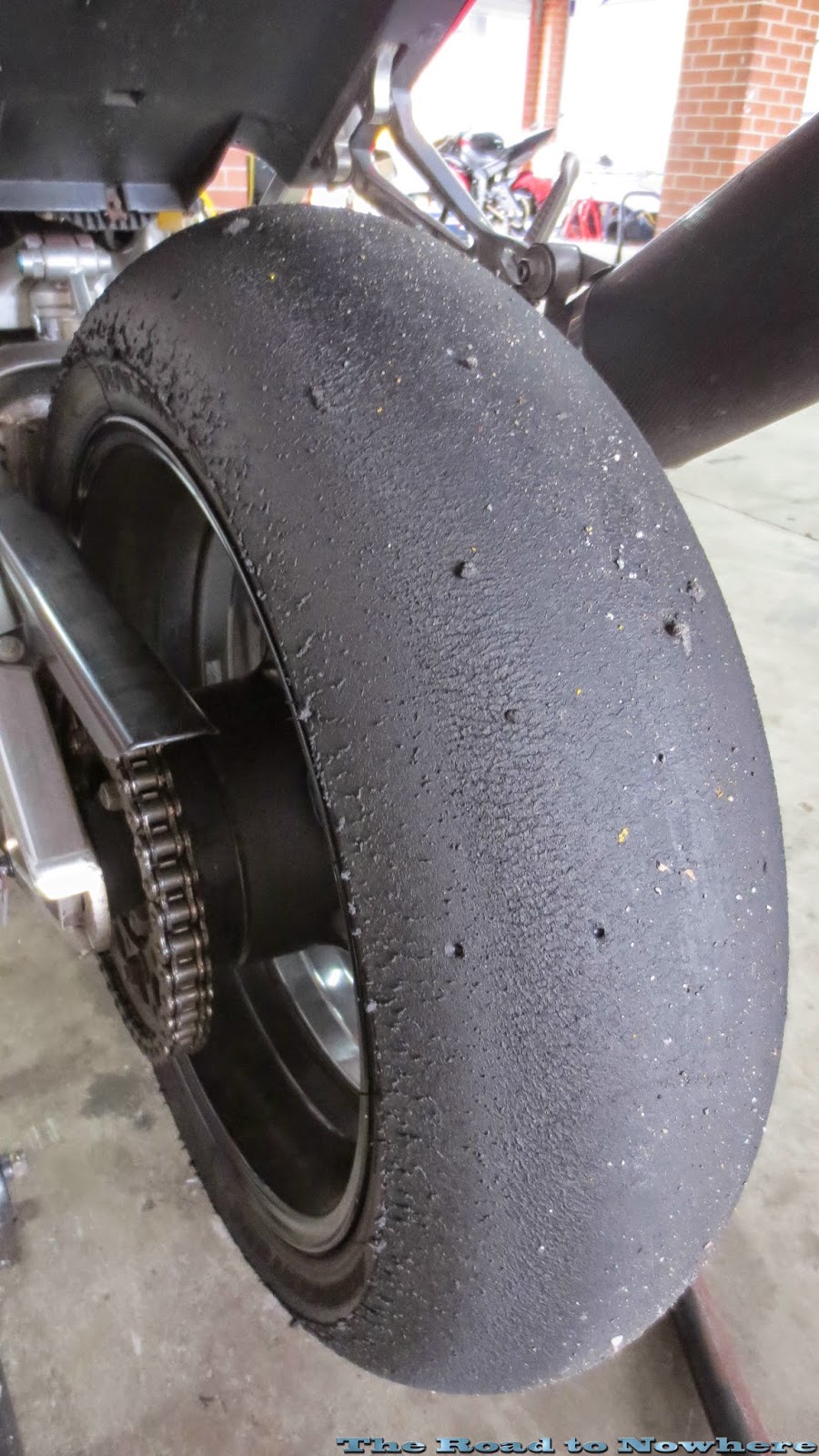 Coincedentially we happen to be in the same pit garage that they had just had the world launch of the new R1 at and still had the WE/R1 logo up. Must try harder and get back into red group. 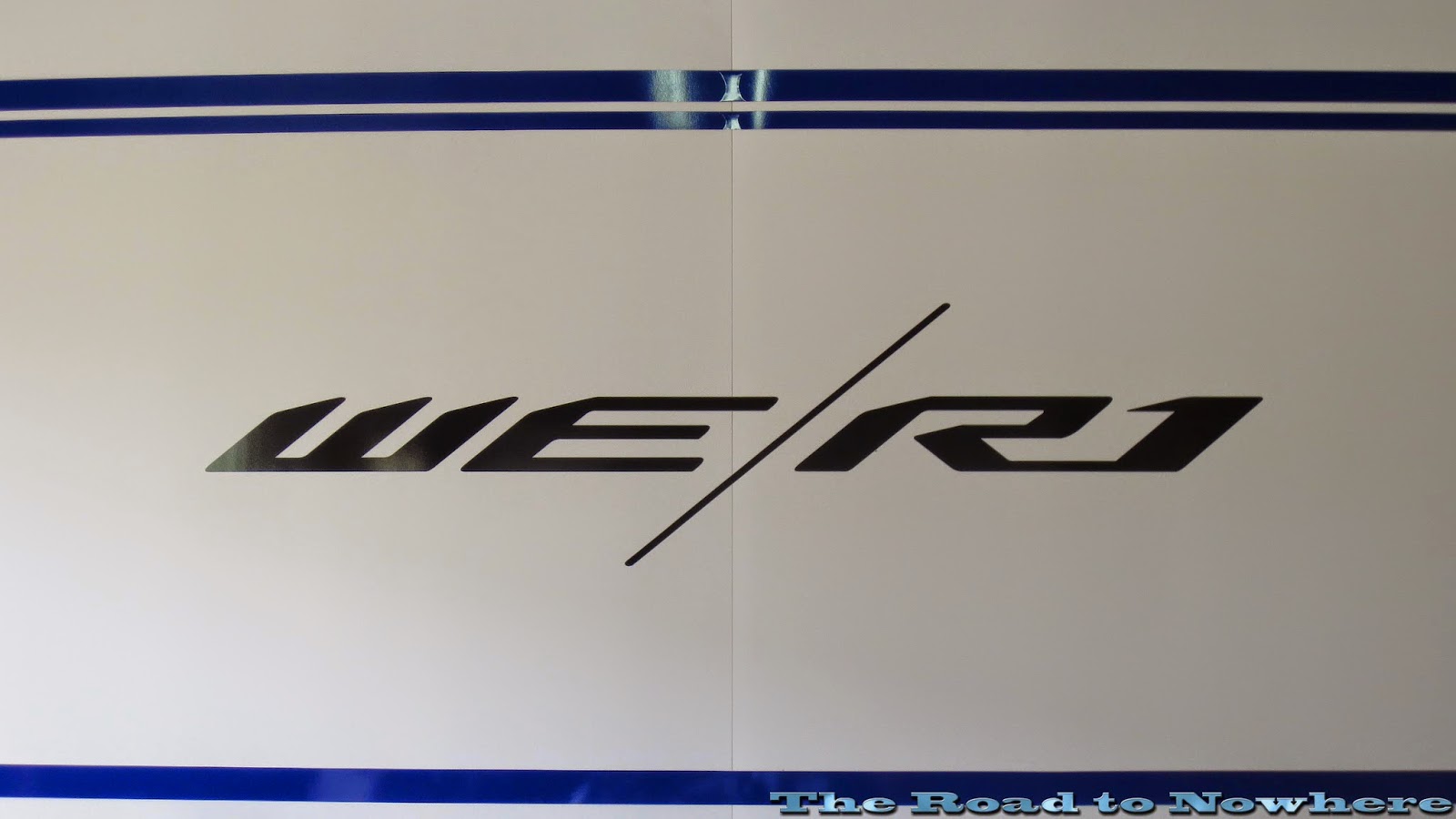 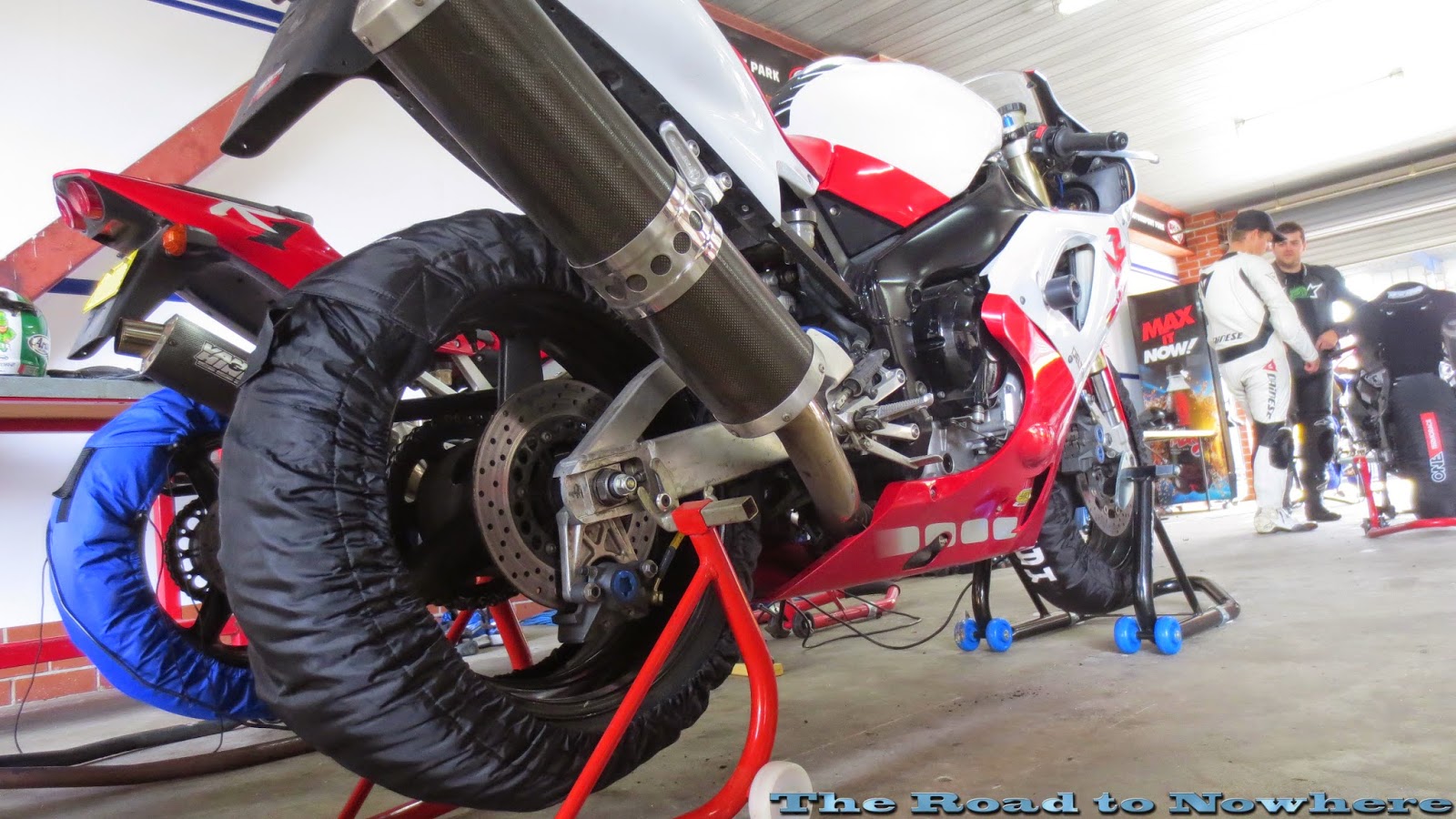 All up I'd managed to complete nearly 5 sessions, the last session I only did about 5 laps as I was getting tired and didn't want to push it and ruin the day. Bushpig had finished and packed up after the previous session and decided he would check my last couple of laps which turned out to be 1:50.6 and 1:50.5. Pretty consistent seeing I was getting tired at the end.

One thing I noticed was that my bike seemed to be down on power as the last ride day I did here I'd managed to get up to 260-265kmh but not today, best I could get up to was about 250kmh. The old R1's engine is getting a bit tired with 65,000km on the dial.

The following pictures are by Ray Oxford who photographs most SMSP ride days. Great photos Ray. All credit for the following photos go to Ray. 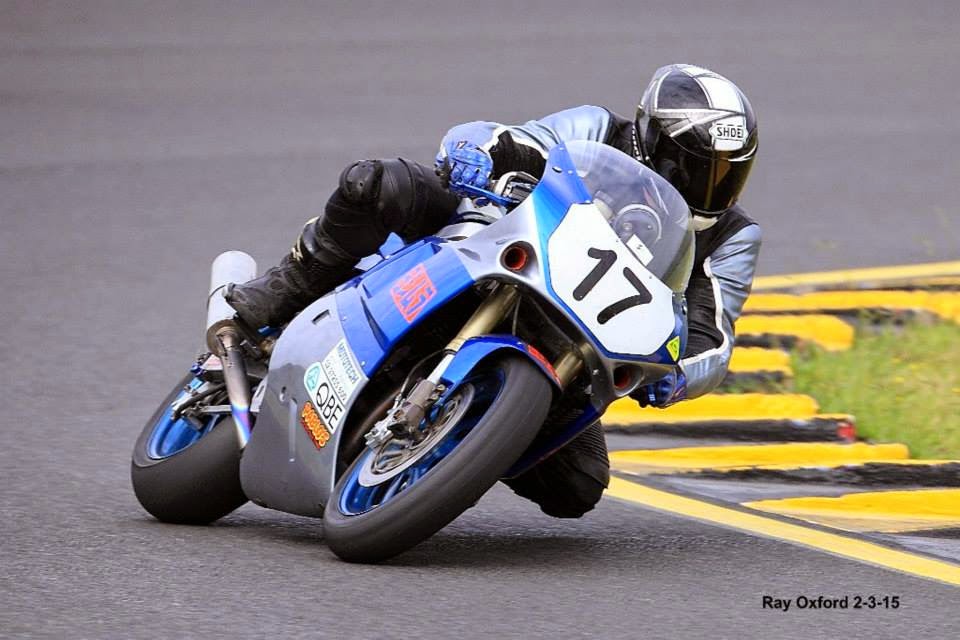 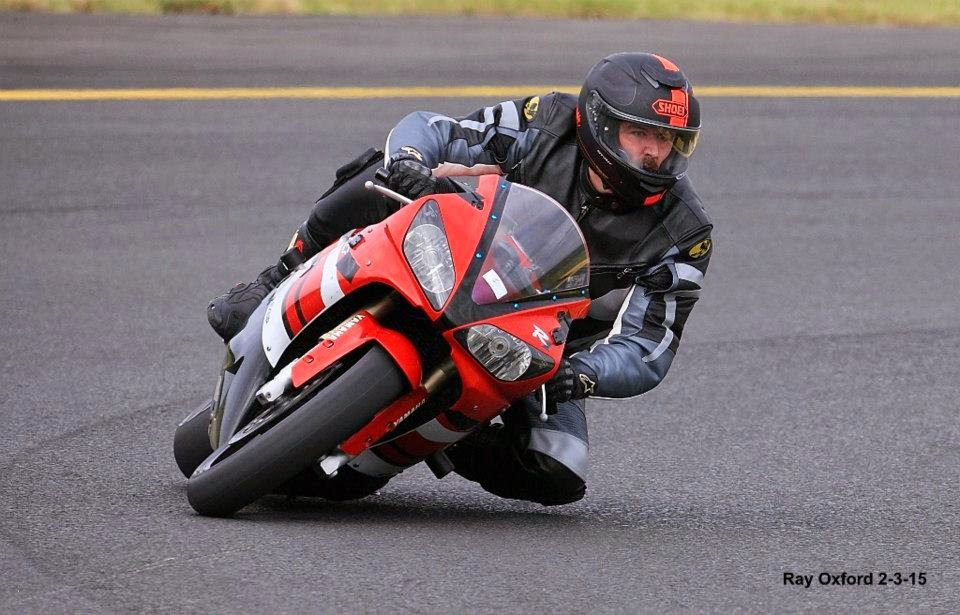 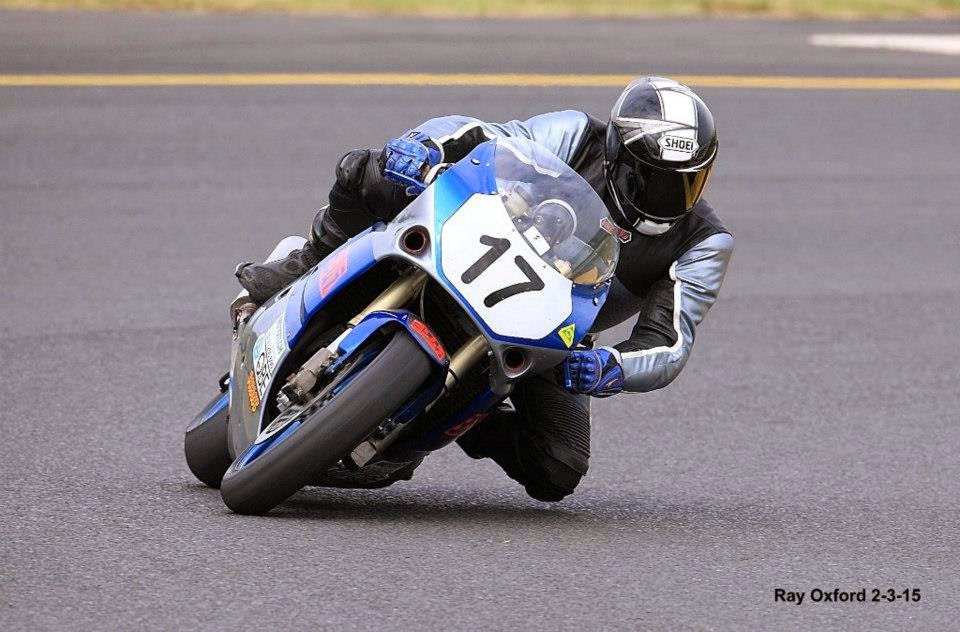 Another fantastic day out at the track. SMSP was a lot more technical than what Phillip Island was and a bit slower but it was heaps of fun. And it only took 10 minutes to get there from my house. We will be back again sometime soon. Many thanks to my good mate VTRman for loaning us his bike trailer to get our slick shod bikes to the track. Your a blood legend mate. Thanks. Maybe you should call your self Zthouman now huh?

If you've never done a track day and have been thinking about it the only thing I can say is just get out there and do it. You'll learn more about how your bike handles in 1 day at the track than you will in a year riding on the road.