On Sunday Bushpig and I got one final ride in before Christmas. A quick blast up my favourite road, the Putty Road was just what the doctor ordered. I played follow the leader with Geoff blasting his way along at a good clip. I noticed that my new helmet was really, really quiet compared to the last one and the flip down sunnies were working great. I could put it up and down at will when needed if it was dark or in shadows. I also noticed that air flow through it was very good and with the visor just cracked slightly a got a nice breeze across my face. Nice in the heat. 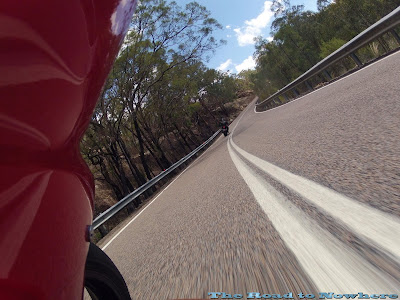 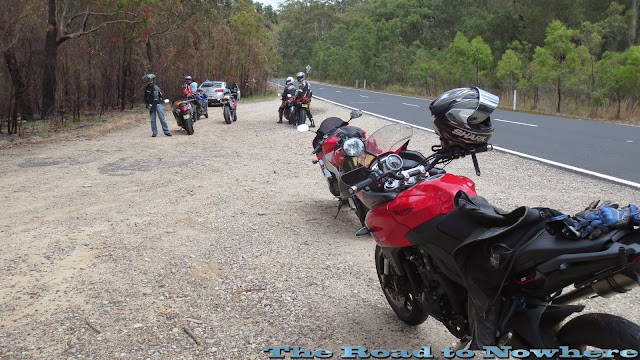 The zipper on my leathers had been slowly coming down as we rode until it got to the bottom and my jacket filled with air, making my already bulbous body look like it had blown out to low flying weather balloon proportions. I decided to pull over to zip it back up and get a quick break, with all the extra wind pressure in my jacket my hands were getting sore just holding on. That's when I noticed something quite unusual in the burnt out bush land.

A closer inspect revealed a frame with an engine in that was still intact. It appeared to be a Yamaha but what sort was it. It still had the Vin number plate on it. Turns out it was a Yamaha FZ8. I guess the people who dumped it here couldn't read the sign. 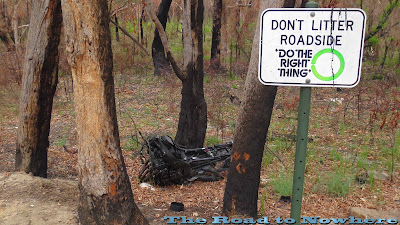 Geoff asked if I'd like to ride the Tiger. Sure you bet, I won't thrash it at all. Just a gentle ride like going to Sunday church. Hehehe. I was really surprised with just about everything about the bike to be honest. A complete comfort machine, but it also was effortless to turn it into the bends, it was very quick steering and yes we did some tight twisties to test it on. It was very punchy getting on the throttle more so than my R1, but likely due to being fuel injected. One thing I noticed was the rear suspension was too soft on the rebound as with my huge girth aboard it was pogoing at the back in some of the bends. A couple of clicks here and there will sort that out. Geoff had already backed it off, but probably to far.

I goes well, handles particularly well and is comfortable all in the one package. Thanks for the ride mate, and I didn't bin it on you, consider that your christmas present from me! I also noticed that my new quiet helmet was making a whistling noise when I was on the Tiger. Probably due to the different screen positions/angles and how I was sitting on the bike compared with mine, which went away again once I got back on my R1. 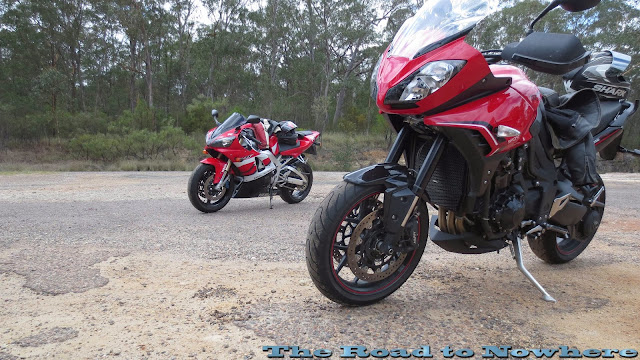 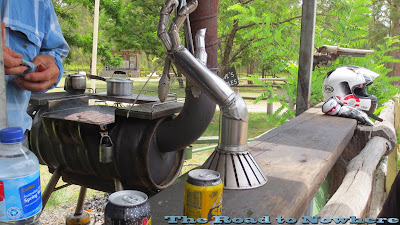 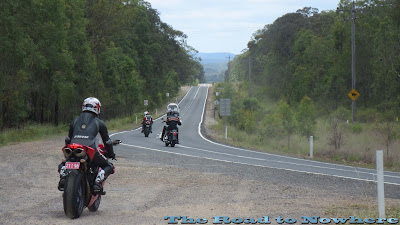 We stopped in at the old half way house on the way up and had some early lunch in the way of a bacon & egg roll and drinks. Chatting with the owner he was saying that the old burnt down half way house might be rebuilt next year.

We continued on for a quick blat up the 10 mile and stopped in for a refuel in Bulga and nice refreshment at the Fighting cock tavern. It was then back down the 10 mile towards home. Did I mention how fast Geoff was on his new Tiger. He wasn't holding back and I could see him laying black lines all over the road.

All in a great days riding just before the Christmas break. Thanks for the great day out Mate. We had a absolute ball.