Touring on a R1

I planned to get out on Friday for a ride as it was my RDO, but no the rains gods came down upon us and then again on Saturday this time with lightning storms thrown in. Sunday rolled around to blue Sky's with not a cloud insight. I quickly suited up and got going before 7am. I have been busting to get a ride in for ages so today's effort was going to be epic. Geoff had soft c$*ed it and wanted to spend quality time with his new missus rather than get out on a ride. Hahahahahahahaha.

First stop was for some air in the tyres at the local servo as the bike wasn't handling well. When I checked, the front only had 27psi in it. The air system kept coming up with an error when I tried to fill up until I realised that it wasn't actually working. I left there in search of another servo with only 20psi in the front. Wooh the handling had become Harley like, you just just couldn't turn the bastard.  The next servo had a working pump but my tyre had become warm by then so I didn't really know what I was putting in. Not a great start to the day and about a 20 minute waste of time.

Once that was sorted I headed out over the Blue Mountains and down Victoria pass which I took quite gingerly this early in the morning. It was cool up in the mountains this early but it was soon starting to warm up as I turned off the great western hwy and headed for Jenolan Caves. With all this rain we've been having the country side was beautiful and green.


I had a little scare coming down the first bend into the twisty stuff as a kangaroo was standing right on the verge of the road within 2 metres of where I passed by. You never know what those things are going to do. I quick descended to the bottom of the steep ravine and crossed the bridge into the mouth of the Cave. This cave is bloody huge, and the bike sounds pretty awesome going through it. The road goes straight through and out the other side then on into Oberon. 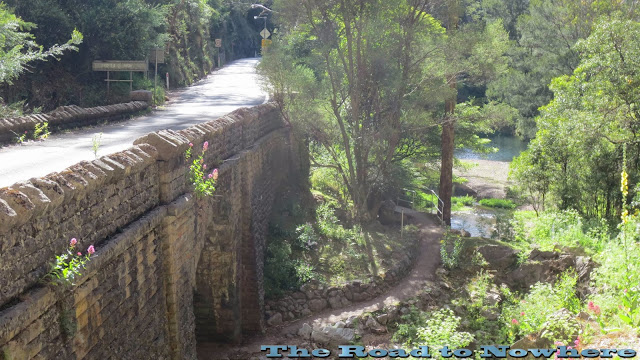 After the quick stop at the caves I continued on into Oberon for my first fuel stop of the day. It wasn't long before I retraced my route back out to shooters Hill road which winds it way through the pine forests with spectacular views. Geoffrey your poxy oil leaking triple would not have kept up with the mighty R1 on today's ride. It was still early only about 9:30am and there was nobody about so the ride was that much better for it, deserted roads, twisty tarmac, this is R1 territory. 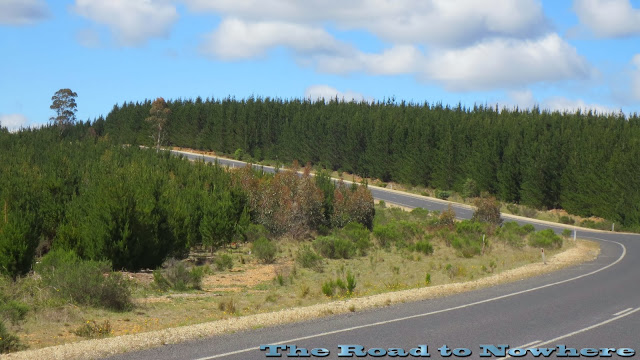 The ride down through the Gorge was good as usual with no traffic about and then on into Taralga. There were only 2 bikes here this morning stopped at the coffee shop, to early to hit the pub up. So I continued on into Crookwell. The road between Taralga and Crookwell still has the 5km of dirt but it was no problem and easily dispatched barely slowing down for it.

An early brunch was had in Crookwell as I wondered where I should eat. It quite easily became apparent where I should go, there were a few bikers in the one coffee lounge. They can't all be wrong, so I too indulged and I tried the ham, cheese, tomato & relish open melt washed down with a cappuccino and it was delicious. Crookwell was also my second fuel stop for the day as I cruised on out at midday. There's a group of  about 10 fantastic uphill 45kmh bends leaving Crookwell on the way to Bathurst, which I reckon with a bit of practise you could knee down them all. 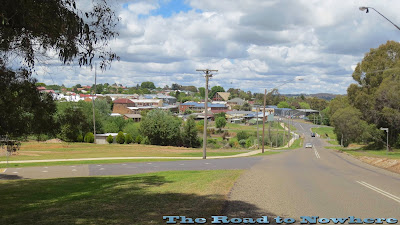 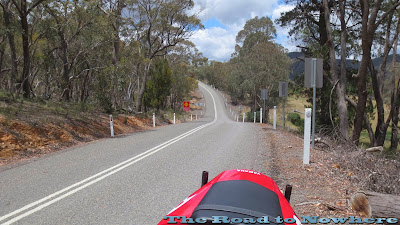 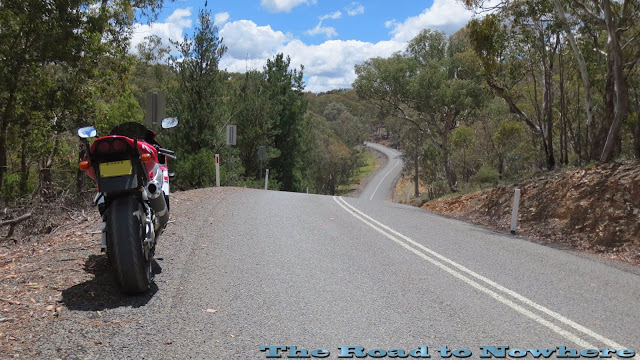 There is another section of dirt about 8kms long to negotiate which is pretty twisty, which needs to be tarred to make this a fantastic run. It would be more like V-Strom territory than the R1 but I was still having fun. A little dirt doesn't faze me. Sports bike riders that won't do any dirt need to harden the Fn$k up and just do it. Some of the best bike roads have dirt stretches, the Bonang Hwy being one of them. There were 4 small sections of dirt along here maybe about 15km in total length between them so all in not that bad. 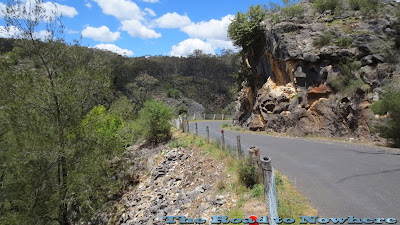 As I came along here I noticed a sign that said Abercrombie Caves 2km on side road, so I thought I'd check that out as I've never been here before. It had the smallest winding road I've ever been on I with rock cliff faces and sheer drops on either side. I've never been to the Abercrombie Caves before so I thought I'd check it out. Looks like you have to pay to go inside this one and you can't drive through it like you can with Jenolan Caves. Still would be worth coming out for a look at a later time. They had a large camping area at the bottom near the Creek. I stopped to clean the dust from my visor and the gopro as it was completely covered. The footage later was near unwatchable there was that much dust on the cover. 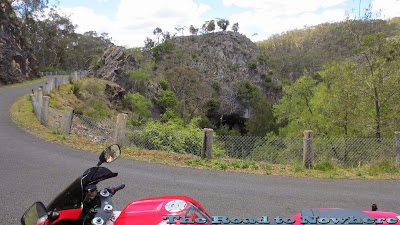 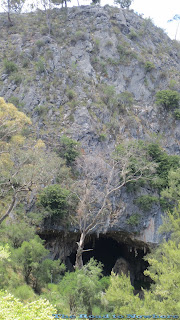 Just when you think you've just about been everywhere and seen everything there something new and different and interesting to look at. This was the view of the cave mouth from high up on the road looking down. I could see lights inside and a gate to get in. The hill above the cave was enormous. I can't help but think who the hell finds this stuff in the middle of nowhere in this rugged country side? They must have been lost.

Leaving the caves behind for a second time today I continued on towards Bathurst. The road here continued on a slow and steady decline and becomes less hilly and tends to get much straighter until you get to Bathurst. No time for a lap of the mount today as its starting to get on a bit and I still have about 3 Hours riding to go. I didn't want to spoil the fun and ride along the highway so I turned off and went through Tarana. The road through here is very narrow and its also like a roller coaster ride. I stopped in at the pub for a quick refreshment, sorry Geoff you missed out again. I guess it really wasn't your day. 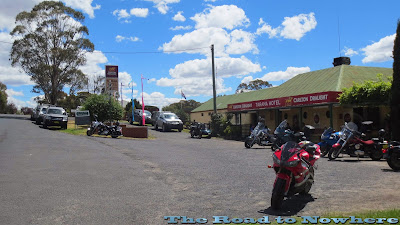 It was then on past Lake Lyell just near Lithgow and over the Dam Wall and on into lithgow for my last fuel stop of the day. Rather than go straight up the Highway I decided after Mt Victoria pass that I would switch over to Bells line for some more riding fun on the way home as Sunday arvo the Highway is clogged up with cars. As usual Mt Vic was like motogp. 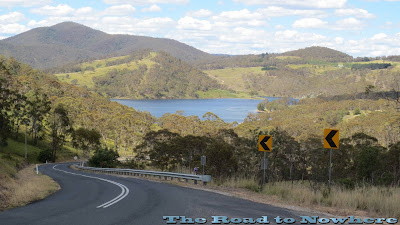 As I came down the set of twisties at Little Hartley my speedo clocked over 60,000 km's. Tick off another achievement and this is now the oldest bike I've owned and also the most km's I've put on the one bike. It's still going strong. 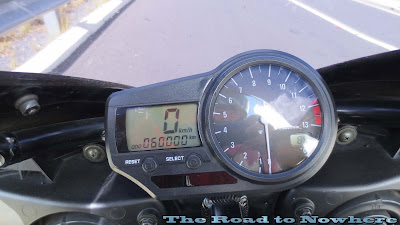 Crossing over to the Bells line of Road I noticed that on either side of the road that the recent bushfire's had come through here and burn everything to ash. It was a bit eary really with some areas completely burnt with others untouched. See below picture. It looks like they've used the road as their containment line and back burned along most of it. I remember the smoke from these fires blanketed Sydney only 2 weeks ago with smoke so thick it blocked out the sun. 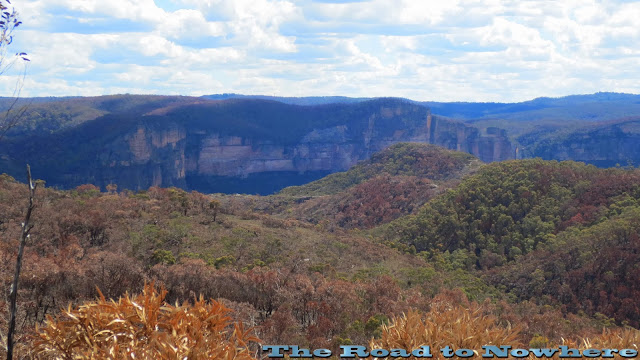 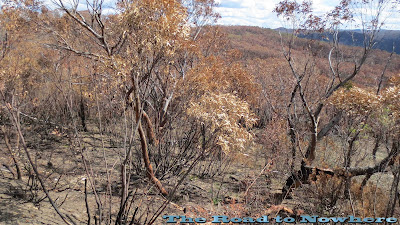 I eventually arrived home at around 5pm in the afternoon. It's been a pretty epic days riding that I won't soon forget, at around 10 hours even though I was tired I still think I could have ridden for a couple more hours if I had to, but I was glad to get off and have a shower and a beer. I'd managed to cover 701km's for the day, went through 4 tanks of fuel and ridden some new bits of road. Looking at the R1 when I got off it looked more like troubdours dirt bike than the nice shiny R1 that I left on at the start of the day. Who say's you can't tour on a sport bike? 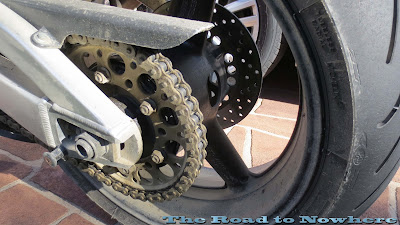 Here's the google maps link of the ride.