DAY 2
I'd awoken this morning at 6:30am and immediately thought "oh god today is gonna hurt". Getting back from the pub late and drinking till 2:15am seemed like a good idea at the time. Luckily I'd been drinking pretty slowly and not with Bushpig otherwise I'd have been completely wrecked. I was just feeling tired and thanks to bringing my camelback I stayed fairly well hydrated during the night. We rode back to the pub in the morning and had some breakfast. After that I actually felt pretty good considering, no hang over just tired from being up late. Thank god because last trip in 2009 I was wildly hung over and the next morning on the Bonang Hwy was like a living hell. This road we were about to embark on - famous for 1038 curves in a 90 km stretch from Orbost to Delegate NSW. thanks for that spiel Tarsnakes. It was a long ride planned for today to at around 500kms with at least 250kms of this in winding roads of 35 -65km corners. Now that's what I call entertainment.


View Larger Map
Due to my initial laziness I'd not even got the camera out to take any photos until we got down to the 105km sign on the Bonang highway. Our route had taken us down until the turn off near Bega then we turned up towards Brown Mountain. I really wanted to ride Brown Mountain as it is such a good bike road,  but we actually turned off and headed down through Candelo then Wyndham and onto Bombala. I actually think we made the right choice as there are many more twisties through here like about 60-70kms worth compared with about 20km on Brown Mountain. Following York through here was quite a lot of fun, with bushpig following me. Bushpig has some video of us riding through here I'll have try and prise it off of him.

We refueled in Bombala which had a bike show on in town this weekend, unfortunately we didn't have the time to go have a look although we did see a Honda CBX 6 cylinder pull into the servo where we stopped for fuel. It was 12pm by the time we left here which is very late in the day seeing as where we were going.

First stop on the Bonang Hwy was at the 105 Km sign in the pic below. See that painted marking on the road. There is a big dip in the middle of that which I hit whilst heavily braking to stop for a pic by the sign which I'd nearly thrown it away on. 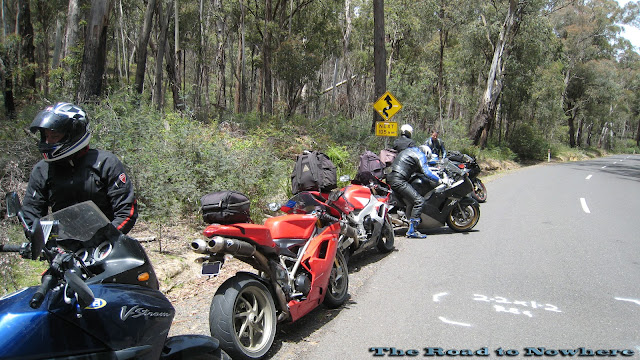 Here's a short video at the start of this great road. I was taking it pretty easy down here. I didn't even see the lizard on the road until I watched it back on the gopro, i think I remember seeing what I though was maybe a stick but as you will see it was no stick I nearly run over.


There were all sorts of bends along here and no straights which was all great fun. Only spoiled by about 20kms of dirt. Then it was back into it again. We stopped to gather at the rest stop about 50kms from Orbost. I was quite tired by the time we got here and so was Bushpig by the look of it...... 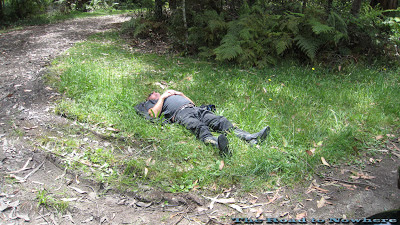 We gathered and regrouped and everyone had ear to ear grins this road is that much fun. 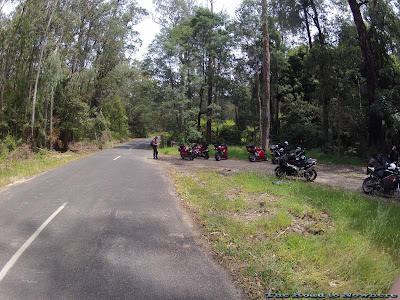 The last trip here in 2009 I was badly hung over and it was like 36°C and I went down to the little creek at the back of here and dunked my head in the cool mountain water to cool down. Lucky I wasn't feeling like that today. The rest break here was good and I'd felt a lot better after the stop than before so I decided I'd up the pace and have some real fun which I did on both counts. I caught up to York and Jeremy at the front and waited and filmed Jeremy. I could see him leaving tarsnakes on the road exiting the bends. This is what its all about.


After some lunch (2:30pm) in Orborst we headed out for Omeo. By this stage me and Bushpig just wanted to get there without any side diversions, which is exactly what happened just out of Orbost most of the Group split off and headed up to Buchan, but I was thinking Fuck it, I just want to get there plus there are still a lot of twisty roads to ride on just to get there.

We headed straight to Bruthen then up along the Tambo river. This is also one of my favourite pieces of road. I was having to much fun and only remembered to stop for one photo. Wish I'd taken a few more. 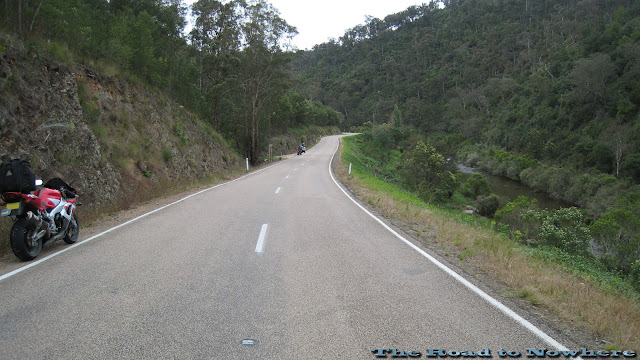 We arrived in Omeo late in the arvo somewhere around 4:30-5pm I think. I went to get petrol from the only 2 servos in town and found that both were closed no fuel. Yep this place really is in the boon docks when you can't even get fuel on a Saturday afternoon.

I don't normally put pictures of myself on my blog because I don't want to scare the bejesus out of my readers, but I had to just show how buggered I was by the end of the day. By the way the reserved sign on the seat next to me was Wayne's seat, the poor bastard couldn't make it we missed him but I bet he missed us more. It was funny to see the other guys roll into Omeo an hour or more later than us and they all looked absolutely stuffed. 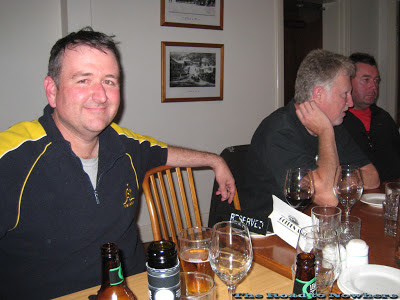 We finally hit the sack at about mid night as by then we were totally knackered. The next day was going to be the shortest day but had just as many twisty roads. I was getting ready for a big day which turned out to be the best of the whole trip. Stay tuned.....
Posted by Chiller at Saturday, November 24, 2012